Current market patterns suggest a reasonable chance for a near-termed rally, as I have mentioned on this blog a few times lately. However, I am becoming increasingly convinced of the potential for a significant downturn in 2013 – the magnitude of which may be similar to the 1999-2002 & 2007-2009 bear markets. The chart below is one that I’ve posted on this blog in the past. As you will note, the S&P is in an uptrend.  The chart suggests the S&P will face significant long-term resistance at or near 1500. The trendline projects the S&P to peak in early 2013. Supporting this projection is a 5-year cycle that may be present in the current sideways market. Before I get into that, lets look at a 4-year cycle occuring in the last sideways market. I’ll focus on the Dow Jones Industrial Average for the next few charts.

The market had its last sideways consolidation between 1965 and 1982 – where the Dow was unable to penetrate 1000 for the entire 17 year period. In 1983 the Dow broke out of this range-bound pattern into the greatest bull market ever seen. That bull market ended in 1999, and entered another sideways consolidation period. My books (SmartBounce & Sideways) were written with investing in the current sideways market in mind. 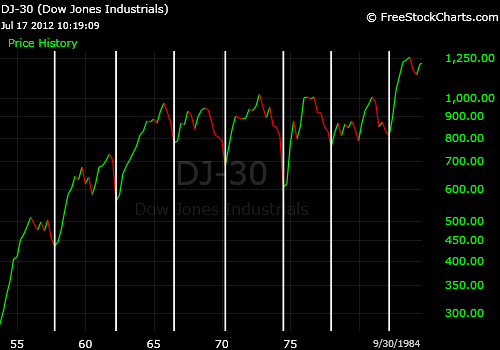 It is apparent that the Dow was following a cycle leading into and during the 1965 – 1982 sideways period. Starting in the late 1950’s, the Dow formed a fairly predictable trough roughly (not precisely) every 4 years. I’ve marked vertical lines on the chart above, where you will notice that the first trough occurred in late 1957, leading into 6 more troughs spaced roughly 4 years apart ending in 1982.

Interestingly, the Dow may be following another cycle in the current sideways market.  The chart below shows the potential for a 5-year trough to trough cycle that has been present since 1999. For all of you cycle-experts out there, I recognize that the 5-year period illustrated is not precise – not to mention the fact that there isn’t enough data to qualify it as the genuine article. But, being the pragmatic investor that I am, the fact that the last sideways period (per above) had a pretty reliable cycle throughout, and the fact that there does appear to be about a  5-year rhythm to the current market– I am sticking my neck out here and calling this a potentially tradable pattern.

The last peak in this pattern was in late 2007, which occurred about 4/5th  through the cycle (this is known a “right translation”). If this pattern is indeed a true cycle, it may trough again in 2013 – approximately 5 years after the March 2009 trough. The peak may have occurred last spring at 13,250.  Conversely, it could have one last run to challenge or beat that high in the next few months. Either way, any upside over the coming months may not last.

This potential cycle, along with other classic technical patterns presented in the first chart, suggest a bear market likely ensuing in 2013 after any upside over the coming months. Please feel free to comment below on any findings you may have had regarding current market cycles – and whether any of your research backs or disproves my observations. You input is always welcome and appreciated.