Will rising rates kill the bull?

I’ve been in the financial Industry since 1990—first as an “Investment Advisor” with both small and large brokerage firms – and then later as a discretionary Portfolio Manager. Throughout that 25 + year history, I lived through a few periods of rising and falling rates on both US and Canadian markets. I’d like to see if we can draw any assumptions out of past stock market behavior and interest rate policy by the US Federal Reserve over that time period. Below is a graph of the US prime rate—which is a reflection of the rate that is charged by the banks to their best commercial clients. Note that individual clients are often charged variables above or below prime depending on the loan type and credit rating. Anyhow, you can see on the chart below that prime (top graph) and the S&P500 (below the prime graph) tended to move in harmony during my career. They have been correlated in movement since 1990—with one exception – which was in the early 1990’s (prime fell, markets rose). 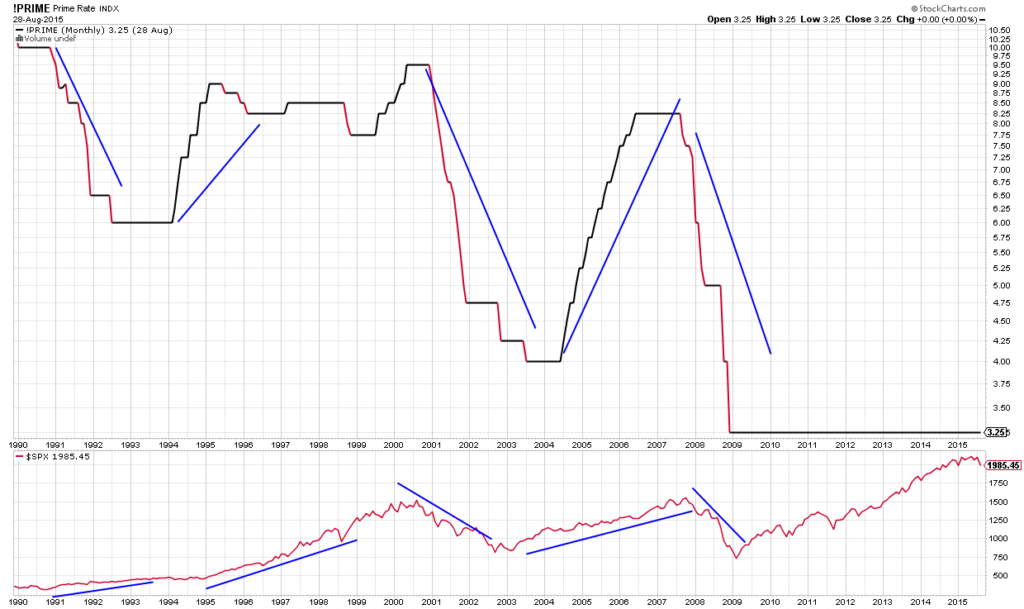 The Fed fund rate (chart below) – which is the rate that banks charge when lending to each other—is also correlated to the markets movements. So, it would appear that rising rates don’t hurt the stock market—at first. Where the trouble comes in is when rates peak. That of course occurs after have risen for a while, and the Fed policy to tighten is finally doing its job—that is, they are finally cooling things down. The stock market typically declines only after period of rising rates. I’ve marked the approximate peaks on the Fed Funds chart and circled the follow-up corrections on the S&P500 within that chart.

I’m no economist, so I’ll defer the in-depth side of this analysis to those who know a lot more than me on this subject. However, it would appear to me that the pending tightening by the fed—whenever it may occur- is not going to be so harsh on the markets. At least for a while. It also occurs to me that the Fed’s tightening strategy will likely be pretty incremental, given the fed’s very obvious understanding of their influence on stock markets (and the consequential “wealth effects” of strong markets). Further, rates are coming off of an artificially low level to begin with, which may dampen any negative effects further.

So for those who fear the eventual rise in rates on the US side of the border when viewing their stock holdings  – I’d probably find something else to worry about. If anything, rising rates will likely suggest an extension of the bull market for a couple of years, if not longer.