Home / Will Canadian energy break out?

Will Canadian energy break out?

I was on Bloomberg/BNN’s Market call last Friday at noon. One discussion that came up was the outlook for Canadian oil. After four years of ignoring the importance of the Canadian oil scene, imposing carbon taxes, and no support for pipelines, the PM of Canada has apparently pulled his head out of his water box. After losing virtually every seat in western Canada – and the popular vote nationwide, witnessing Encana’s recent departure to the US, and renewed “Wexit” separation talks, Trudeau has finally decided to stop campaigning against the industry. With a fresh new view of the energy industry, he is, apparently, finally able to see the situation for what it really is. That is, western Canada is a major economic contributor to the Canadian economy.

Better too late than not all all…. I guess…..

During Friday’s show, I was asked if these discussions surrounding the Canadian oil industry will net out in rising energy stock prices. My answer, of course, came from the Technical Analysis view.

The Canadian oil sector is not yet showing any sign of positive basing within its current downtrend. As at this point, the iShares TSX capped Energy index ETF (XEG) is still making lower lows and lower peaks on the chart. It remains below the 200 day SMA, and isn’t showing much in the way of momentum when we look at traditional indicators like RSI and stochastics. MACD is showing some upside – suggesting at least some potential for a longer termed move. However, comparative relative strength (middle indicator pane below the price chart) remains bearish. As does moneyflow (top and bottom indicators). No major signs of life yet. 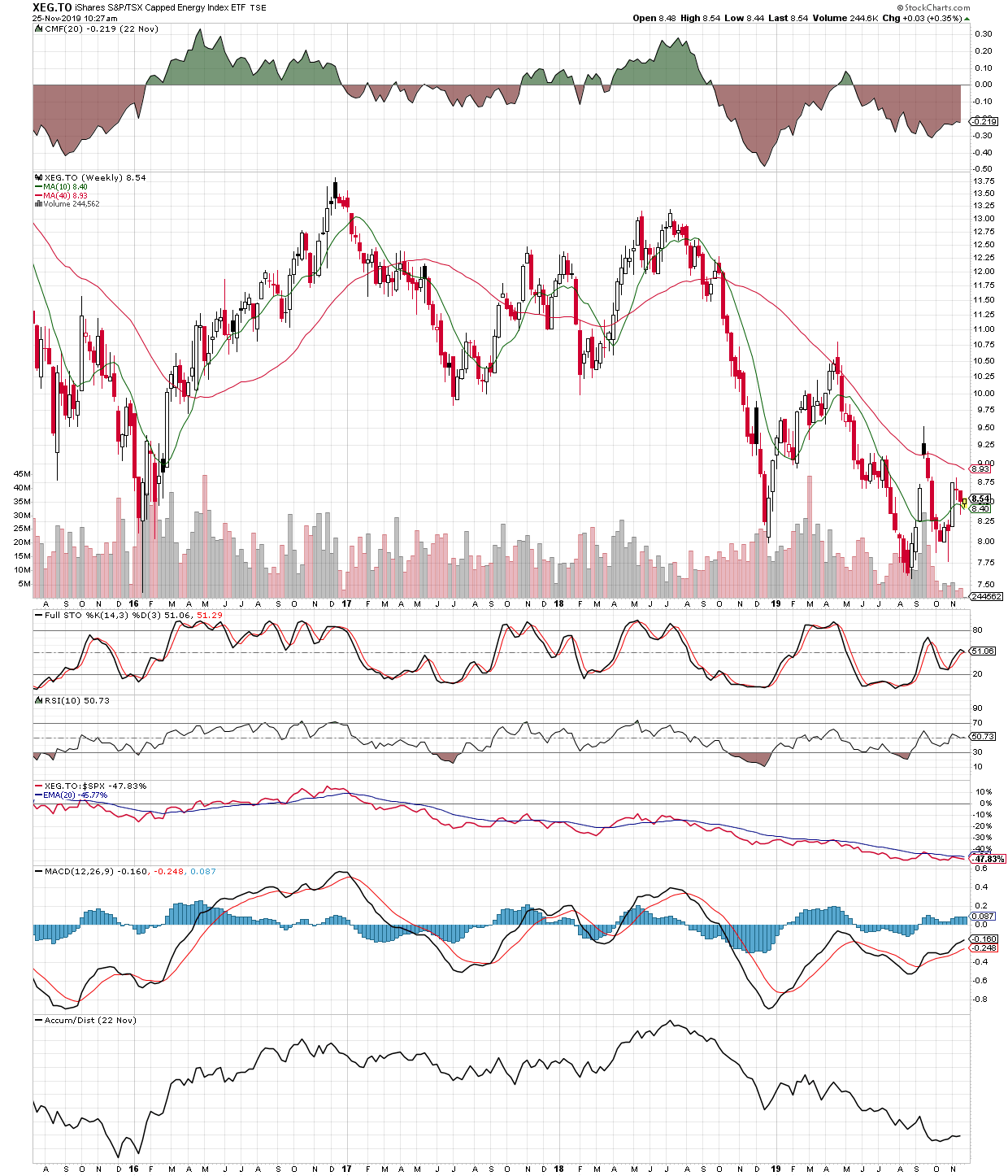 Canadian oil stocks will base and eventually break out. But I cannot see any signs of technical basing or strength at this time. Moreover, energy does not enter into its prime seasonal period until February. Traditionally, energy has its best months from February until the spring. Further, from what I have seen in the meetings with Saskatewan with the PM (which went over like a lead balloon), and from what I hear of Alberta’s strained relations with the current Federal government – it would be a long shot to expect any meaningful revelations or concessions in turning the Canadian industry around.

Meanwhile, if Canada’s energy is to catch a bid, it’s going to take more than our bumbling PM’s sudden realization that he needs to reverse his previous damage to the industry. The price of crude will need to break out to support any potentially positive support. You’ll note that the WTI crude oil chart is consolidating within a right angled triangle. Again, no signs of breakout….yet.

A breakout through the last high of around $63 might prove to be bullish. That would take crude out of the triangle decisively. Watch the seasonal trends (February) for a potential move.

Hot air and empty words will not help Canadian energy stocks. Rather than surmise on the next steps within the political process surrounding Canadian energy – I think it’s best to let the charts do the talking. I’ll be the first one to jump on the trade if we see a reversal in trend for the sector’s stocks. For now, I’ll treat the government talks with the oil industry like a UFO report. Until I see the evidence for it myself, I’m not a believer. Show me the breakout, or the little green men, and I’ll be happy to change my mind.