I did a late night webinar for the Whiterock Shareholders club in BC last night. One question that came up was my outlook on Canadian bonds. The Canadian bond outlook is rather important for investors who play the TSX. That’s because the TSX is concentrated in a few sectors that are largely bought by retail investors for their relatively high dividends. For example, both the banks and the non-bank financials are high dividend payers. That sector weighs in at some 32% of the TSX composite index. Telecom/communications are higher dividend payers that represent 5.5% of the index. Utilities weigh in at 4% of the index. REIT’s come in close to that level as well. Forgetting the high dividend paying stocks that are sprinkled amongst other sectors of the TSX, we have some 45% of the TSX composite focused on higher dividend paying sectors.

These sectors are influenced by interest rates. Sometimes, the influence is negative. Utilities, REITs and telecoms can be negatively influenced by rising rates from a profitability perspective. Banks and financials and are more profitable in a higher rate environment. Nonetheless– there are certain investors who pay more attention to receiving a high dividend than receiving a capital gain on their stocks. So we might just be able to paint a broad brush and suggest that lower rates / rising bond prices might make higher dividend paying stocks more attractive. Without question, that has been the case for the past year. Case in point has been the ValueTrend Income Platform. Its only 50% invested in dividend paying stocks, with the other half in bonds. Despite its lower risk – the platform had a double digit return after fees over the past year. Earning a double digit return in a portfolio that holds a substantial weighting in short termed liquid paper is not the norm. Its clear that the dividend paying stocks are getting overbought. But the end-game wont likely appear for these stocks until the bond market sells off.

Note on the chart below the corresponding rally between the Canadian bond ETF (XQB – red line) and the “Dividend Aristocrat” ETF (CDZ- black line). In fact, you will note that the two do tend to move in sync with other pretty reliably. In fact, the correlation study (first pane below the price charts) shows us that most of the time, the correlation is positive (above the “0” line). So lets take a look at the Canadian bond ETF on its own to see if its suggesting any signs of slowdown after last years rally. 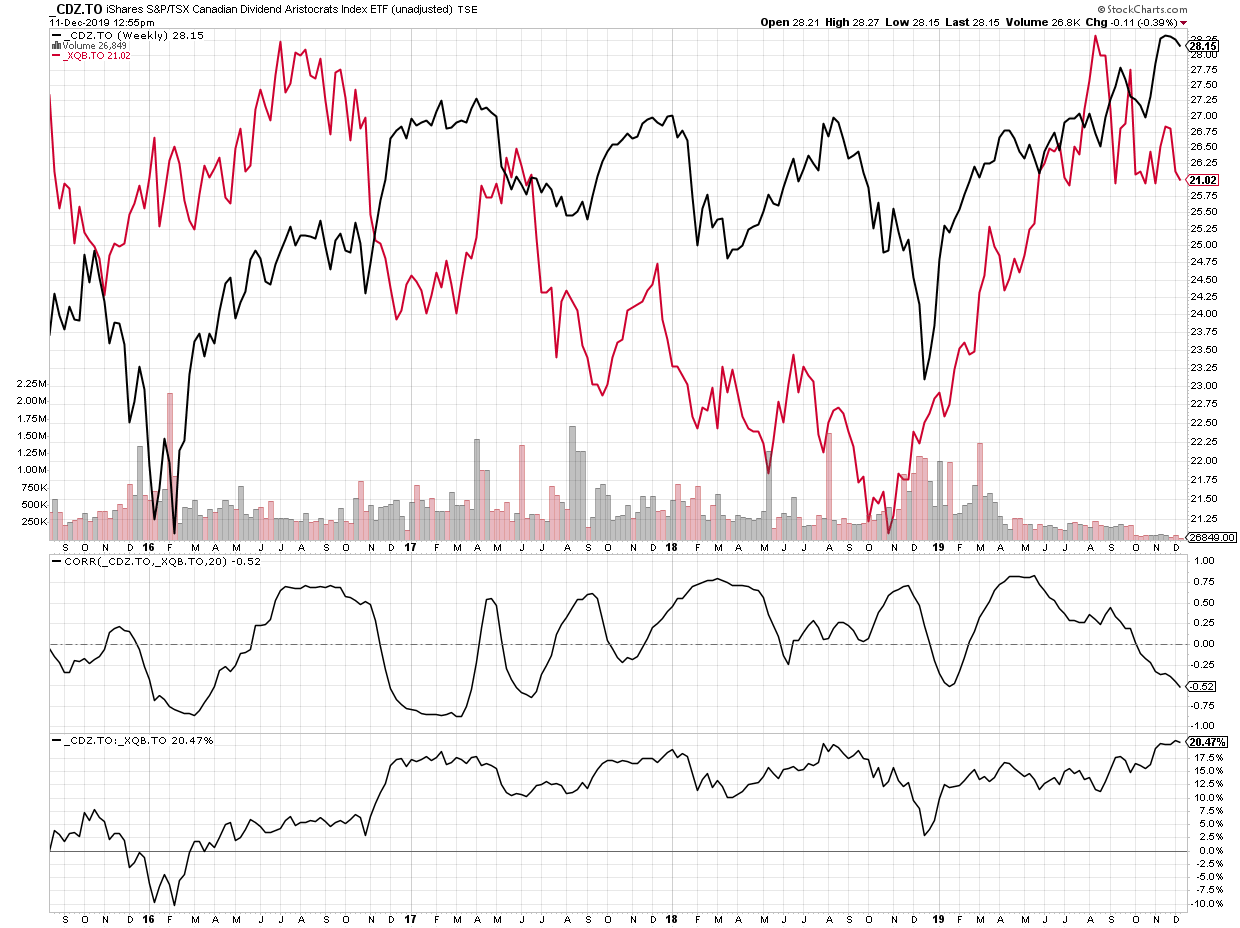 After a strong rally in 2019 for the Canadian bond market, we’re starting to see some consolidation. A right angled triangle has appeared. Old resistance on the XQB chart at $21.50 was met with no breakout on the bond ETF. Long and short termed momentum studies (MACD, RSI, stochastics) are trending lower. We never know where a consolidation pattern will break out. But, we do know that when they break out either up or down, it can be powerful. Given the declining momentum studies, I’d guess that chances lean towards a break down below the $21 neckline. If that doesn’t happen, all is good. So its best to wait before making too bold a prediction. But signs are  a little bearish for bonds – all things being equal. 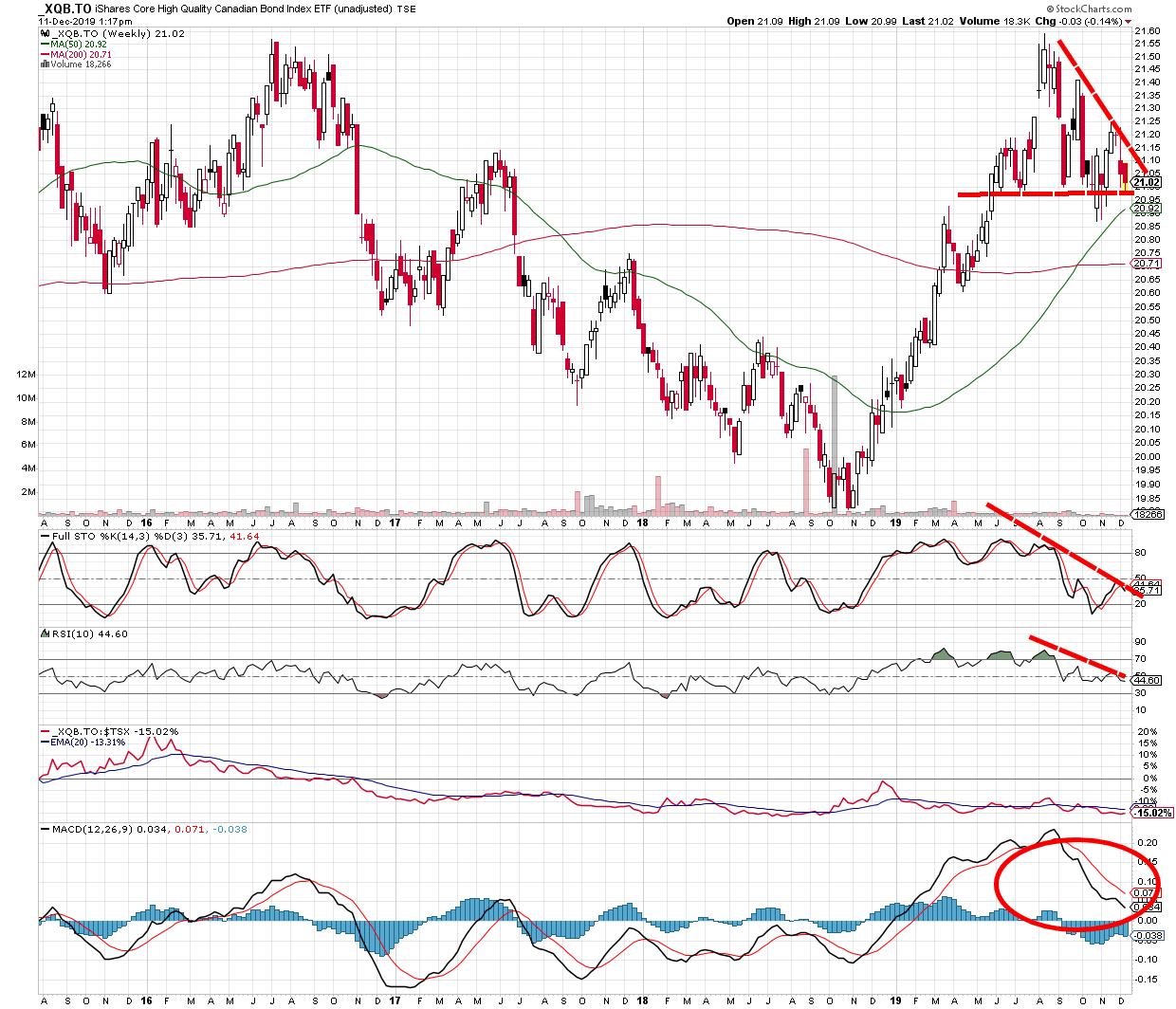 The Canadian bond market has not broken. The trend has paused, but hasn’t broken. However, there are a few cracks appearing. Dividend investors should keep an eye open on bonds. Canadian bond holders too.