Home / Why oil may rise in the new year

Why oil may rise in the new year

Is it time to get back into oil? At ValueTrend, we took profits and reduced our exposure in energy this year – having bought oil and gas producer stocks in late 2020 when they were unpopular (and cheap!).  However, we have long anticipated re-entering the sector with conviction in the 2023 New Year for a few reasons. Today’s blog expands on our reasoning behind this potential.

People sometimes wonder why I discuss and build political observations into my financial blog. The reasoning behind this is sound: like fundamentals and sentiment studies, political actions are an important factor in assessing market potential. Oil, for example, has been a very profitable trade for ValueTrend since its selloff in 2020. We profited via observing changes in trend, dumb money sentiment, and political stupidity.

Lets visit some of the current political backdrop that might influence energy pricing in the coming year.

Lets think about this for a moment: The USA is the largest consumer of fossil fuels in the world. If you are “Team Biden”, and you want lower oil prices into the November midterm elections, you drain the SPR’s now (more supply on the market from the SPR’s) . So… That’s what they are doing – a myopic and politically driven energy policy.

But, again, if you are “Team Biden”, and you care about 2024 presidential election, you must refill at least 30-40% of the SPR drain (according to BearTraps). This would need to occur after the mid terms, and completed significantly before the Presidential election. Thus, SPR’s will be refilled after the mid-terms in November 2022 but well before Oct 2024! In other words, largely in 2023!!!

This, logically, suggests increased demand and rising energy prices during 2023. Refilling the SPR’s will create significant demand. WTI prices should rise. If you are Team Biden, you don’t want that at the cusp of the 2024 election! You want that band aid ripped off and the pain over with well before the election! In other words, in 2023.

Crude oil moves well after February. That might line up with the political timing I present above. 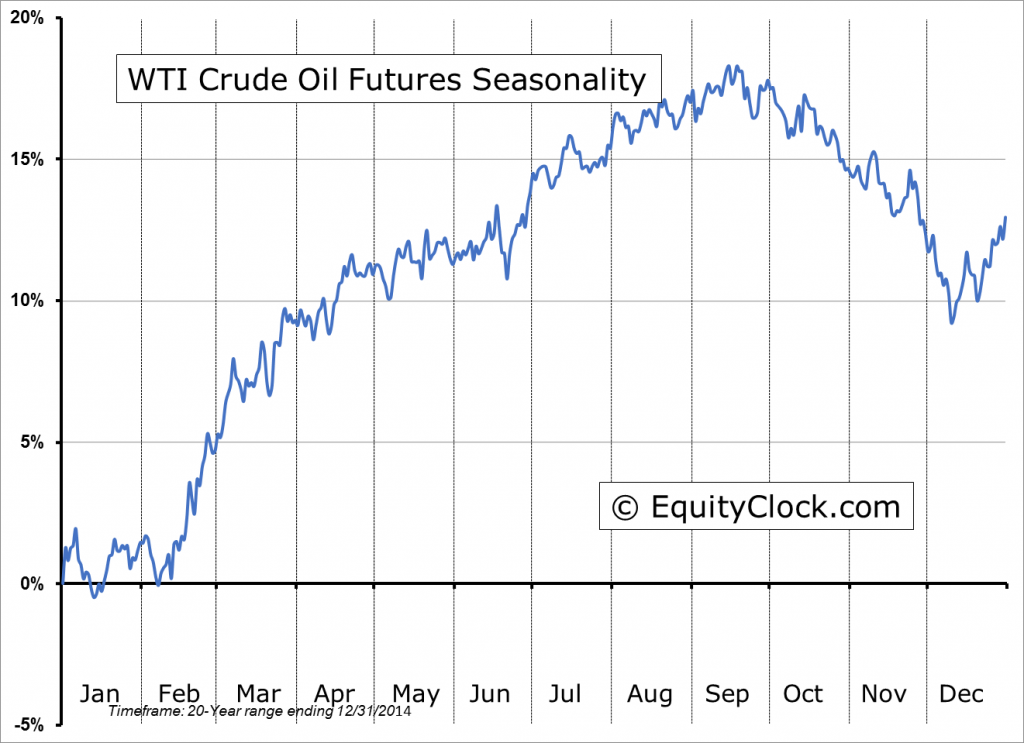 I keep many charts on my stock charts lists. This one has lines I’ve been keeping for over a decade drawn on it. They’ve proven to be reliable. Currently, WTIC is testing the $80 support area, having reached its long term $100 -$115 zone of resistance earlier this year. Assuming $80 holds, I might expect a bounce and return to the $110 area. Momentum oscillators – seen below the price chart – indicate that time is near. 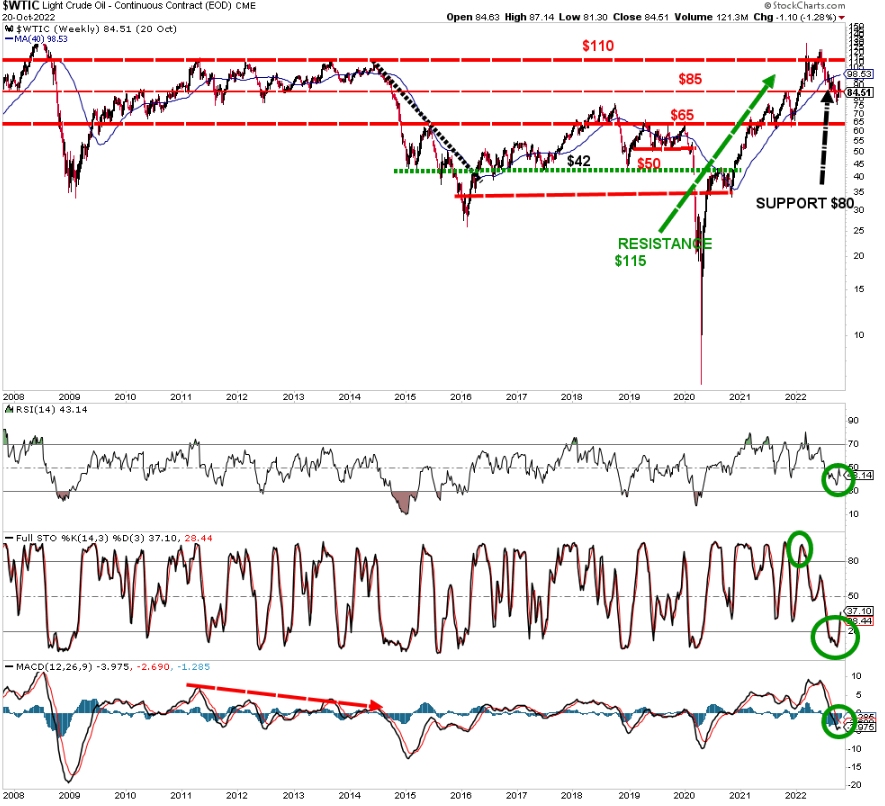 Here’s a chart of the XEG iShares producers index on the same scale as the WTIC chart. The group is running into a wall near $17 that’s been around since 2008. Momentum is not as oversold as is the crude oil chart. So, I’d think that the producers are telling us that the market might struggle a bit in the near-term before a meaningful move. Note that a move above $17 would be uber-bullish. Meanwhile, a return to the bottom of the recent trading range ($13-$14) might suggest at least neartermed opportunity. You can see by this chart why ValueTrend remains fairly light in exposure on the sector. Its not time to jump in yet – but the WTII technical profile suggests a potential may be coming. Whether one plays a commodity ETF or via stocks is the question. 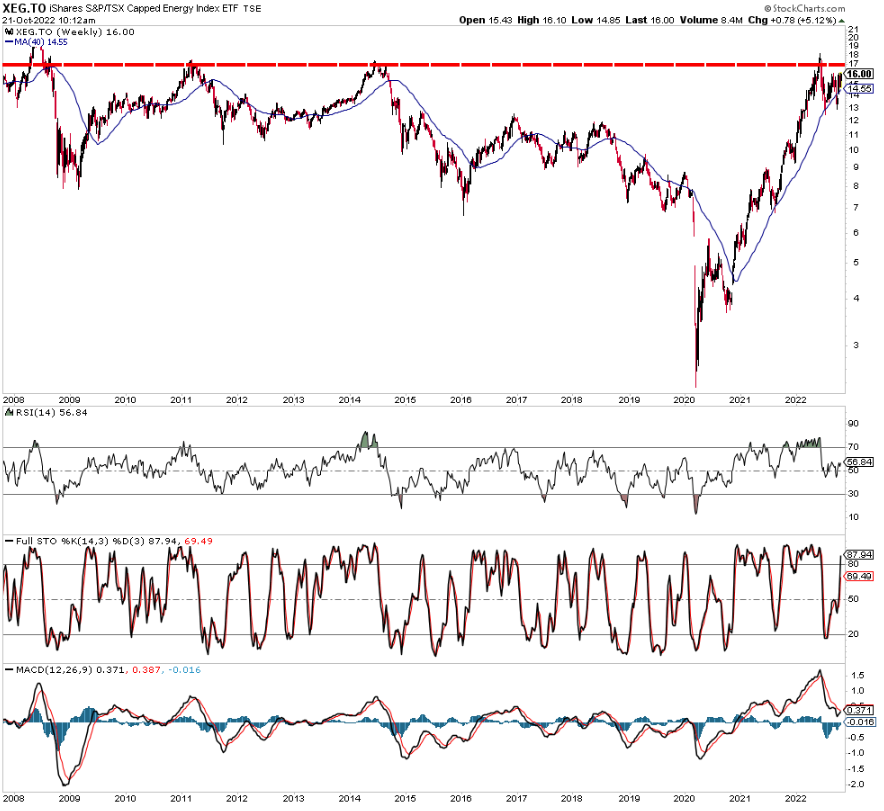 Nothing to do with oil, but wanted to update some news I read just after my blog last week noting Canada’s “spendy” ways.

From a Seeking Alpha news report:

“U.K. Prime Minister Liz Truss said she was “a fighter not a quitter,” before the reality set in that she would need to step down after only 45 days. Whoever will replace Truss will come in learning an important fiscal lesson. Political leaders are no longer able to promise growth by borrowing money without detailing how they will repay it. Long gone are the days where governments had the support of quantitative easing, as central banks tighten policy to stave off inflation.”

In the spirit of the Seeking Alpha writeup, I noted this article last week:

Trudeau’s recent $21BB in new money printing (explaining it is to help with inflation – Seriously…who voted for this fool?) clearly illustrates that the economic reality check in the UK hasn’t had an impact here.