I’ve posted this chart a few times in the past. Perhaps it’s worth revisiting  to see where we are in the money policy cycle of late. As you can see on the chart, the Fed’s murmurings surrounding the end of QE and low interest rates seems to have brought on a change in market trend since late 2014. This may not be so surprising, given that as each of the QE (Quantitative Easing) programs ended, the S&P500 moved into a period of choppy violent movements. Note the market’s reaction to the end of QE1, QE2, and the most recent choppiness coincident with the end of QE3 at the end of 2014.

Given the potential choppy markets that the end of easy money seems to predict, and the rotational market that I’ve been harping about recently, it may be time to revisit my short termed trading strategy. I covered this system a while ago.  Here is the last blog on the system, with a chart on the system’s signals since October 2014.

Rules of the system

The systems rules are simple. At least 2 of the following signals must be met to initiate a trade of an S&P500-related security:

Below is a chart illustrating the recent positions of the system. As you will note, we received a “Buy” signal on Monday Nov. 16th as the lower BB was successfully tested and Stochastics hooked up with a positive crossover. RSI hooked up – although not from an official oversold level. Whatever the case- 2 of our signals (BB test and Stochastics signal) confirmed the trade. I added one new stock to our portfolio on that date. 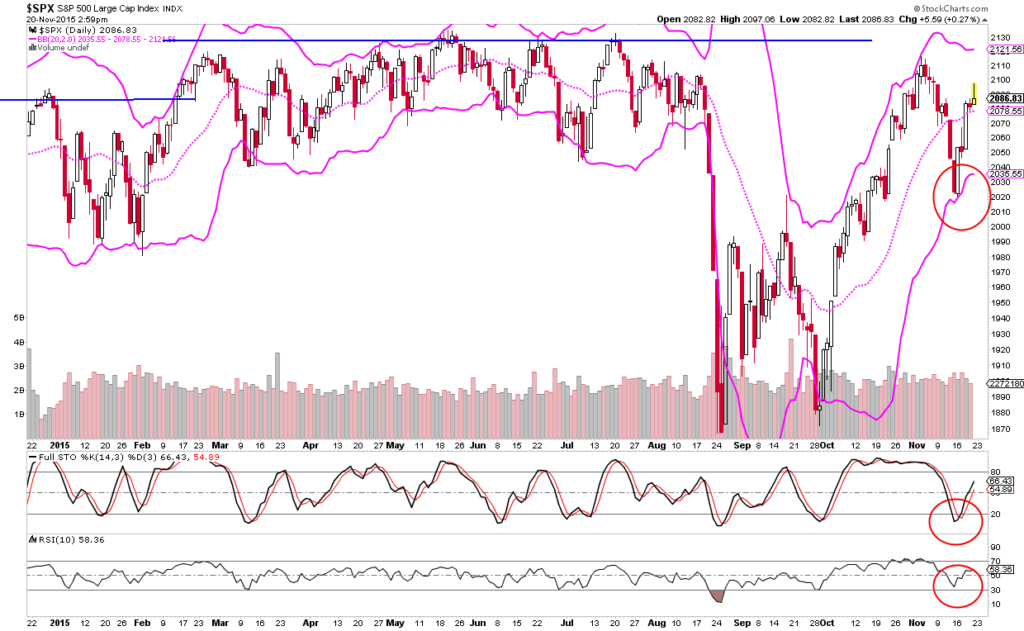 The Bear-o-meter read a cautious "2" last month. That reading on June 9th  turned out to be a decent reading, given the volatility we have seen since then. The arrow on the SPX chart below shows the END_OF_DOCUMENT_TOKEN_TO_BE_REPLACED

"Growth" stocks appear to be rather overbought when compared to their "Value" stock siblings. The chart below is that of the iShares Morningstar large capped growth index ETF (JKE). Its top holdings END_OF_DOCUMENT_TOKEN_TO_BE_REPLACED

Equal weight indexes give the same weight to each stock in the index.  Both small and large companies are given an equal  "importance" in the index. Most indexes are not the equal weight type. For END_OF_DOCUMENT_TOKEN_TO_BE_REPLACED