Home / Where will the market go from here: two arguments

Where will the market go from here: two arguments

Today, I’d like to contrast and compare some potential positives and potential negatives when we assess market and its forward performance potential. I will then outline our approach at ValueTrend to the current market conditions.

Bad news point #1: First up is the technical trend profile. I won’t spend long on this one, because you know this already- but the trendline beginning in 2020 is broken. The SPX is now below support of 4300. Its below its 200 day (40 week) SMA, as it has been for some time – and we are witnessing a “death cross” as the 50 day breaks below the 200 day SMA (note: this is not hugely significant as a predictive indicator, but its worth noting nonetheless).

The SPX is not just breaking its trend – it’s declining on volume. More importantly (see my Online Technical Analysis Course) the A/D line in the bottom pane is trending down for the first time since the COVID crash of 2020. That combination of big volume with declining A/D insinuates that money is leaving the market. 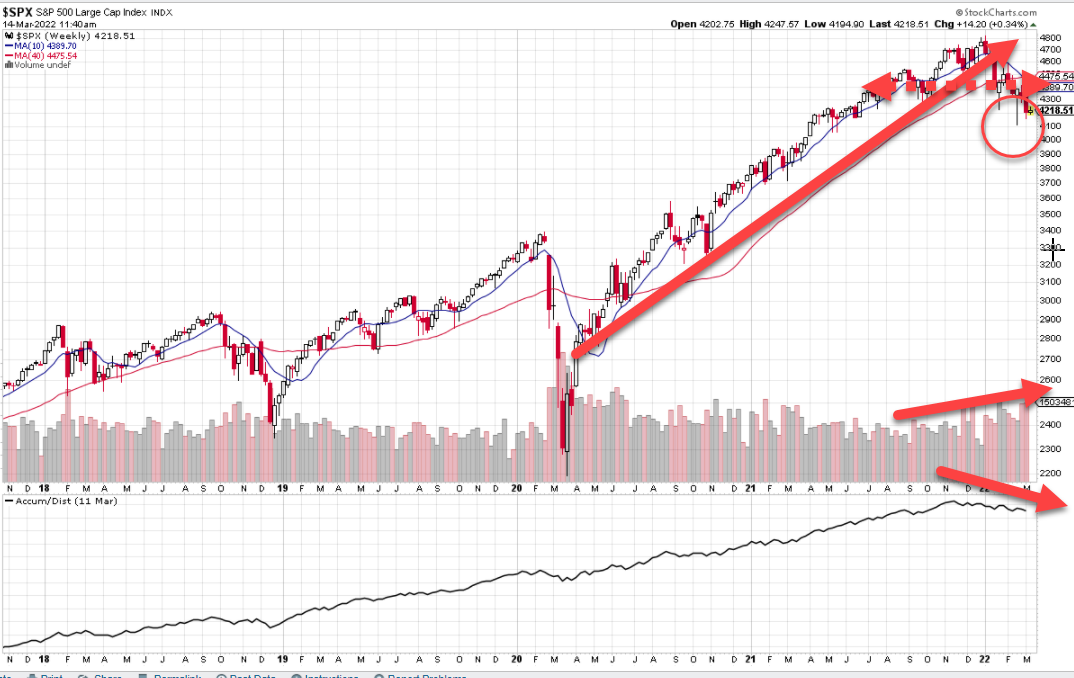 Bad news point #2: The chart below is courtesy Scott Bauer of Prosper Trading. It contrasts rate rising vs rate falling environments. While at first glance, one might conclude that rate hike cycles tend to coincide with rising markets. True. But I do think we have to pay attention to the 1999-2001 period, where rates rose and markets fell. This was followed by soft markets between 2001-2004 while rates fell. Investors as long in the tooth as I am will recall that 1999-2004 (rising, then falling rates) was the boom, bubble and bust era of way overvalued tech stocks from their uber-weightings in the index. Thrown into that mix was the terrorist act of 9-11 in 2001.

Could we draw a similar conclusion to now? After all, we have just experienced a boom and bust of overvalued tech stocks that led into a bubble  on some of them (TSLA, FAANGs, and stay-inside stocks like PTON and ZM).  And now, like in 2001, we are witnessing a hostile act of war – this time in Europe by Russia. 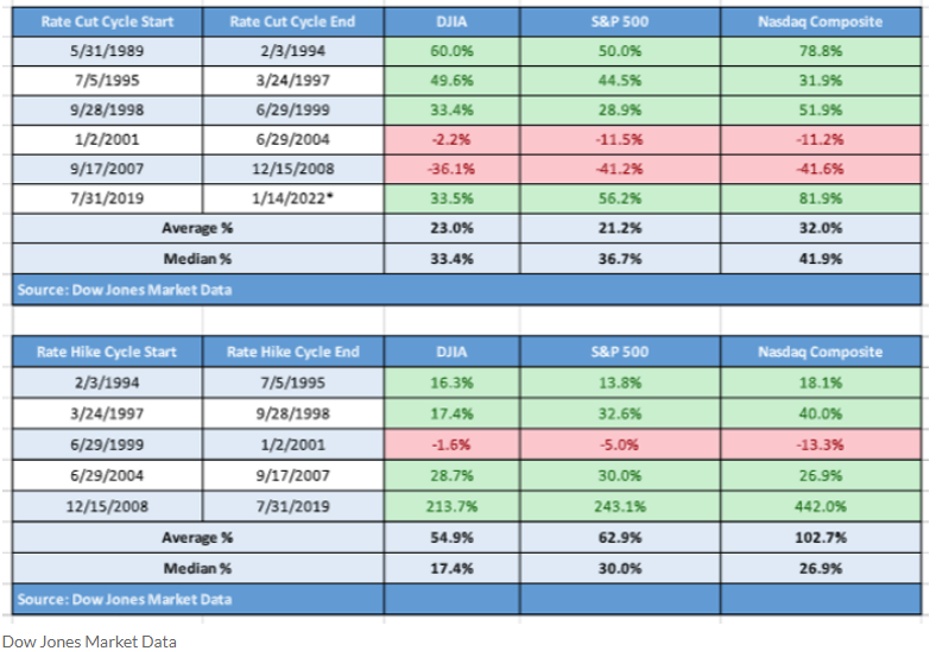 Bad news point #3: Energy spikes have consistently marked either large drops, or the end of bull markets. Please refer to this blog for greater detail. Below is a chart from that blog, noting spikes in WTIC. Each of these oil price spikes corresponded roughly with stock market pullbacks. Anyone unaware of the recent spike in oil prices?

Good news point #1: The SPX was parabolically overbought, leading us into the recent correction. As the market corrects, it brings us closer to the longer termed trendline that marked the bull market that began after the 2008-2009 crash. If one were to estimate the point of trendline and market price intersection, it might be reasonable to suggest a pullback to about 4000 as a final stopping point to stay on point within the large uptrend line. That’s less than 10% away from current pricing. You’ll note on the chart that even the COVID crash – beyond a spike – held the line. So, officially, the bigger picture for the bull is not over – by any means.

Good news point #2: Most sentiment indicators are approaching, at, or recently hit their “buy” zones. Things like a spiking VIX and the Smart/Dumb money compilation show capitulation is nearing. This means the market is getting too pessimistic. I won’t repeat these indicators that I use in the Bear-o-meter, which I talked about last week. A few “new” sentiment examples include:

The NAAIM National Association of investment Managers net equity exposure is nearing an approximate level of being “too low” in equities. This is a contrarian indicator showing that hedge fund managers and “ordinary” managers are becoming overly pessimistic. Note how low equity exposure tends to swing back up quickly (indicating a re-entry by managers) when they get too under-exposed. Key points on the chart where exposure was too low occurred:

Note how the current exposure indicator is getting down to those same levels.

The AAII (American Association of Individual Investors) isolates individual investors and their outlook. The chart below isolates the bear-count.  Too many investors have entered the “I hate this market” zone. That’s normally a sign of good things to come for the markets, as you will note in prior correction bottoms. Here’s the chart: 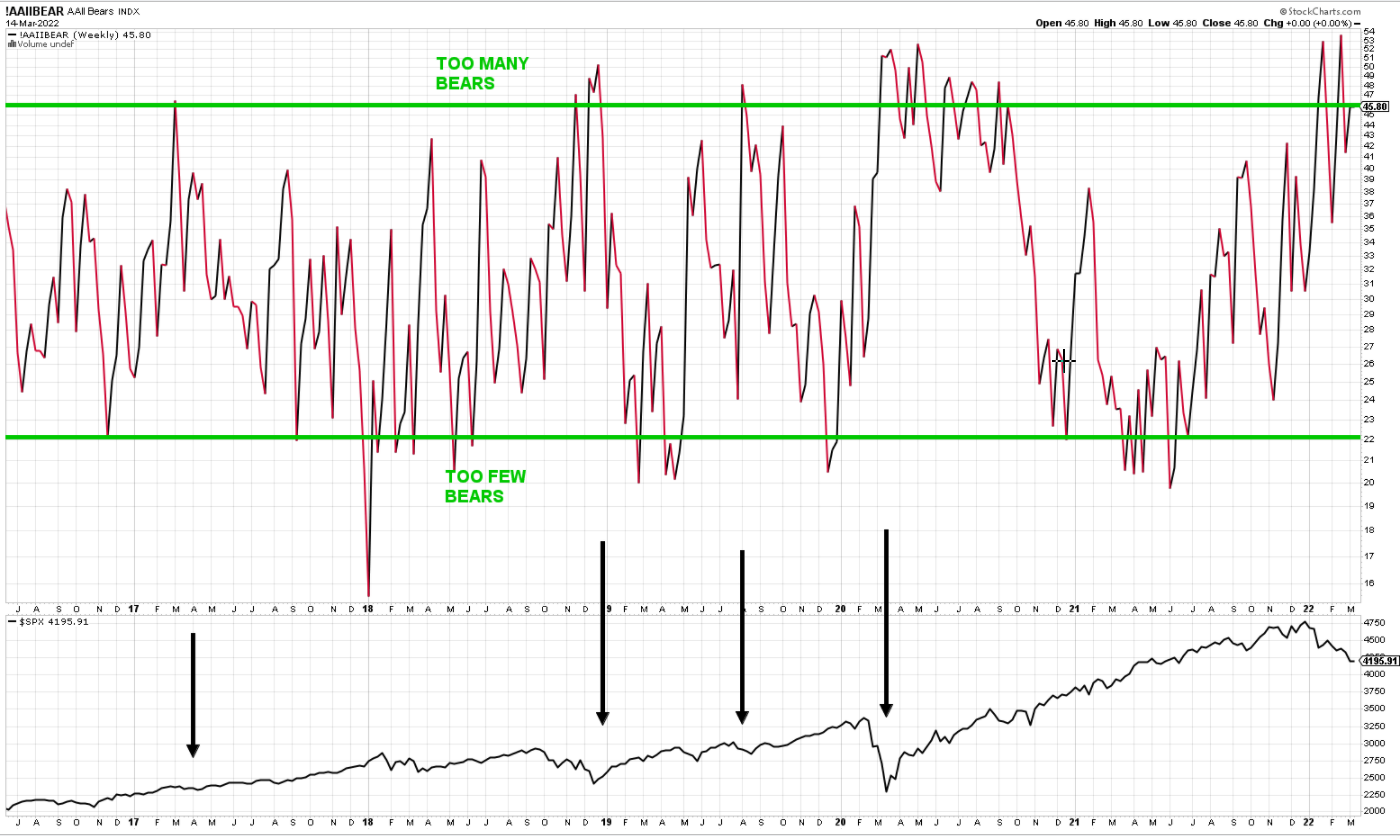 As always, the market is a paradox. On the one hand, you have some conditions of a bubble-burst environment with rising rates and a war type event as we saw in the 1999-2004 era. We see a neartermed chart breakdown (200 day SMA and 4300 support). And we see the historic tendency for oil peaks to coincide with corrections or bears.

On the other hand, we have long termed charts suggesting that, sure, the market could pull back to 4000 to bring back the overdone parabolic move last year. But once that is done, we have a pretty strong trendline that should support prices. We also have a ton of sentiment indicators showing us that dumb money hates the market. And that is almost always a good sign for positive returns.

At ValueTrend, we have a process where we do not predict. We are, however, prepared. Our preparation involves following some rules. These rules include allocations (cash, sector, beta) and strategies to leg out or in in steps rather than leaping in or out via emotionally reactions. Again, I implore you to take my online course for more on that strategy.

BTW–the TA online course has caught the eye of an educational marketing company. I am meeting with the representative this week, but they are suggesting that the course be marketed by them on a wider scale at somewhere near $500/ student. While I have not made any decisions on this, I would suggest that anyone who has an interest in taking it, and has not bought it at its current price of $100 – do so sooner rather than later.