Home / When will the current rally fizzle out?

The current rally was of no surprise to those of us who follow momentum oscillators and sentiment work. Things were pretty oversold. However, the extent of this rally is questionable. Today, I list a few of my technical projections regarding the rally.

The chart below is a daily chart. The red horizontal lines represents areas of resistance – which may represent upside targets on the current rally. As I write this blog, the first area at around 3900 is being tested, and is selling off of. Unless the SPX finds reason enough to push it though this 3900 area, we are not going to see more neartermed upside. However, if the SPX breaks 3900 in the next few days, we are looking at an old support/ resistance zone in the 4050 – 4100 area. That would be target #2, assuming 3900 breaks.

On the plus side, note that neartermed momentum oscillator stochastics has some potential upside left in it before it reaches the levels normally seen at the top of recent neartermed rallies. Note also the MACD (bottom pane) bullish crossover and histogram’s move over the 0 line. This is bullish. RSI often reaches around 60 on the daily chart during a neartermed rally. Its not there yet (around 50 as I write). So, those factors might suggest at least some potential for a test of “target #2 near 4050.

Either way: My view is that second target is the most we can hope for. Perhaps the recent test of 3900 is all we get. We shall see. I do not yet see much chance of a true bear market bottom, yet. In fact, I still target about 3400-3500 on the SPX as the end-game downside target. Recall from my Technical Analysis Course: A bear market is characterized by lower lows and lower highs, and a price that remains below its 200 day moving average (red line, below). Something big is going to have to happen to change the reality of the current bear market, and for the bull to resume.  Like a Fed statement of slowing rate rises.

That’s a ways to go, yet. See my 3-steps blog from the weekend here. Until the Fed & BOC start hinting at slowing the monetary tightening, combined with a basing action on the charts, its just rallies within a bear. 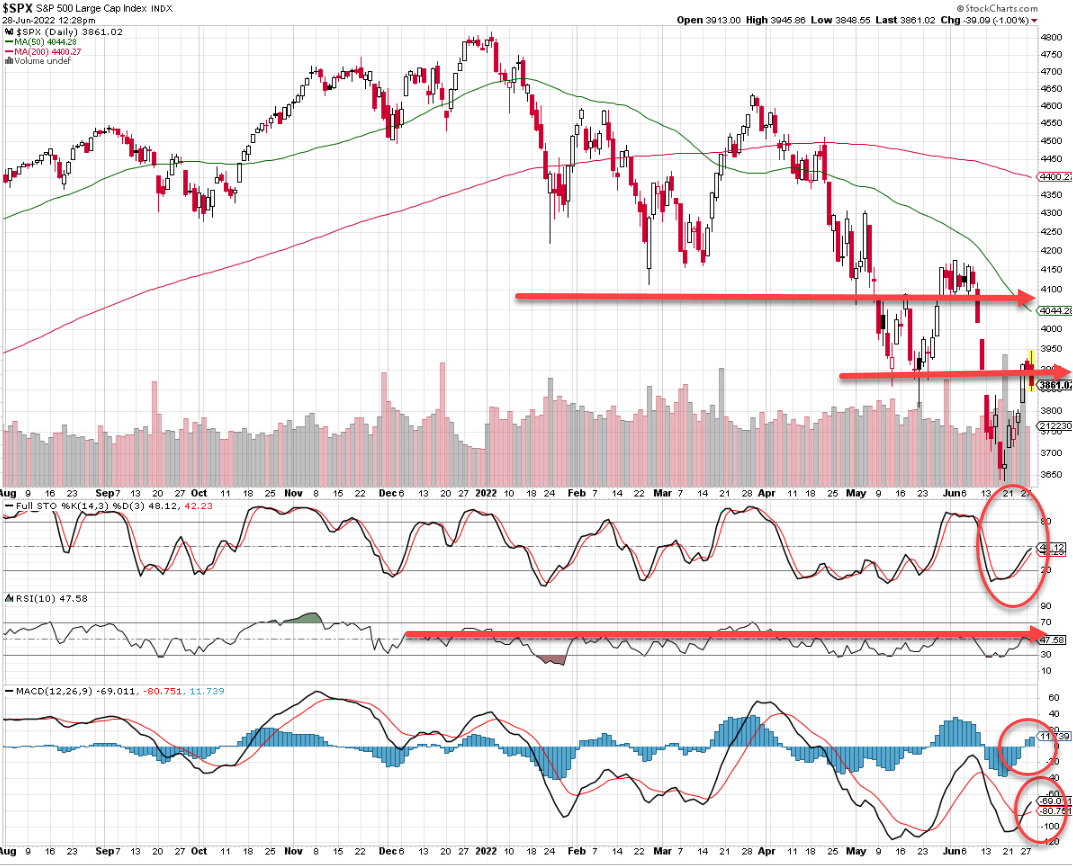