With all of the talk about Trump’s positive US economic plans, we might lose track of the fact that there are markets outside of the USA. The MSCI EX-USA index contains the markets from the developed world – without the US markets. Its a pretty broad way of looking at things, and not necessarily something I would rely on for trading a specific country ETF.  Each country has its own patterns, and indices  really should be analysed on their own merits. For example, compare the charts of Japan, the UK, Germany or Australia (not shown) – and note their unique trading patterns.

Having said that, if we want to make a very generalized and broad observation, we can look at how the mass of indices that represent the developed nations fare vs. the USA, As you will note below, the $MSWORLD chart is coming into a point of testing the top of a down trend channel and a bit of a neckline resistance point. Momentum indicators RSI and stochastics suggest at or near overbought conditions. MACD is moving up –as is RSI. The comparative strength of “the world” vs. the USA has been trending down over the longer term. A small blip upwards in comparable strength lately is not enough to inspire confidence. The USA has been the place to be. 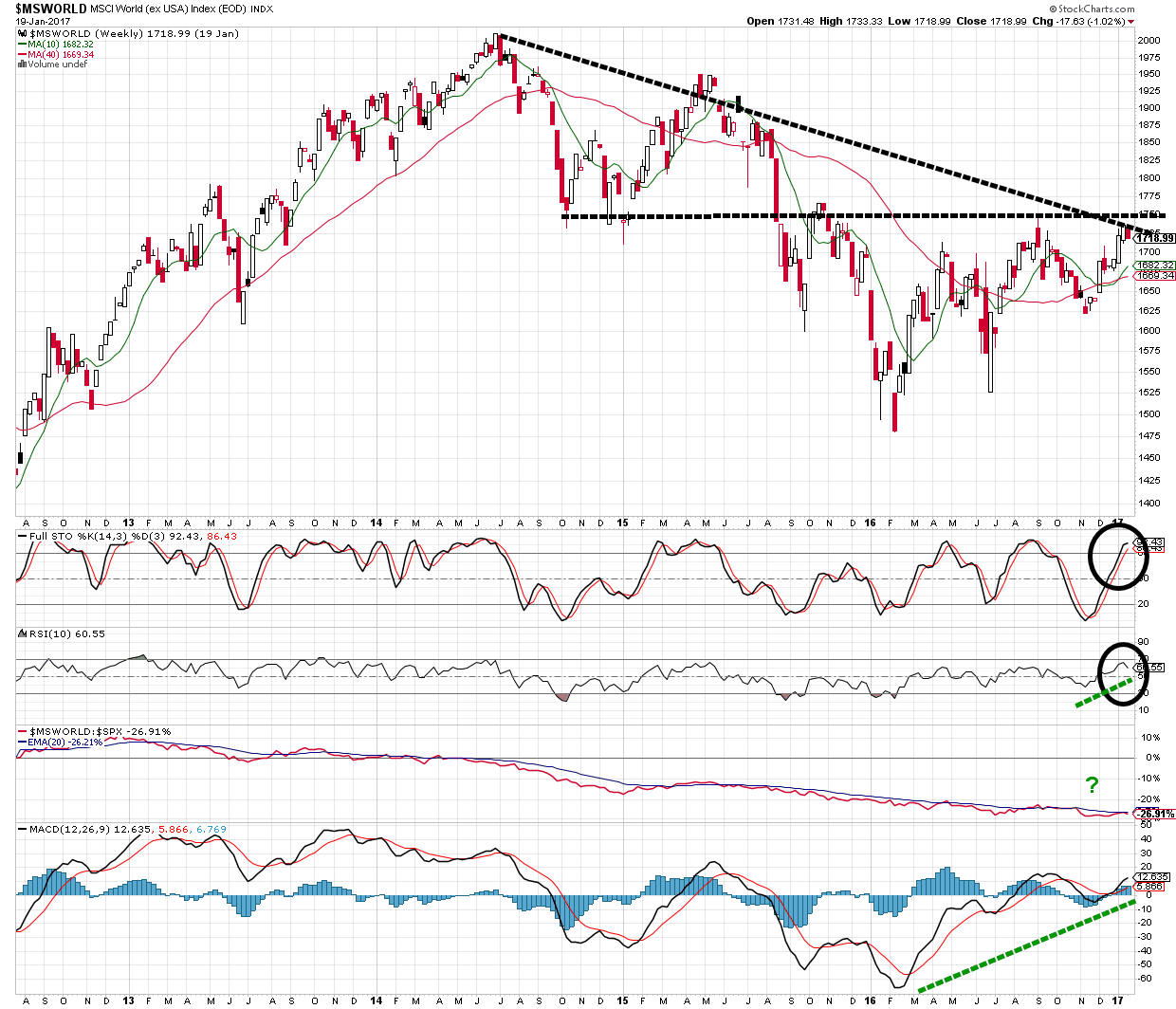 The only bullish formation I can see on this chart is the rising troughs since early 2016. It might give some hope for a break of the trend channel and neckline that I’ve marked on the chart. Given the overbought momentum studies and weak comparative relative strength – I would much rather wait and see if 1720 – which marks the intersection of these two points- is broken on the chart. If that break lasts for 3 weeks (using my 3-bar rule discussed in my book  Sideways), it might be a sign that leadership will begin to shift out of the US stock market. That might be a long shot at this stage… but never say never! Keep this chart on your watch list to see if it becomes an early bird trading opportunity.

The Bear-o-meter read a cautious "2" last month. That reading on June 9th  turned out to be a decent reading, given the volatility we have seen since then. The arrow on the SPX chart below shows the END_OF_DOCUMENT_TOKEN_TO_BE_REPLACED

"Growth" stocks appear to be rather overbought when compared to their "Value" stock siblings. The chart below is that of the iShares Morningstar large capped growth index ETF (JKE). Its top holdings END_OF_DOCUMENT_TOKEN_TO_BE_REPLACED

Equal weight indexes give the same weight to each stock in the index.  Both small and large companies are given an equal  "importance" in the index. Most indexes are not the equal weight type. For END_OF_DOCUMENT_TOKEN_TO_BE_REPLACED