Don Vialoux (www.dvtechtalk.com) recently noted on his daily blog that we have entered the weakest period for markets from a seasonal perspective (Sept 16- Oct. 9th). Don tells us that this weakness is usually related to “earnings confessions” – i.e. negative guidance by reporting corporations, along with analyst downgrades. This year, according to Don, analysts are expecting a 2% + drop in S&P 500 earnings and almost an 8% decline in earnings for the TSX in Q3. 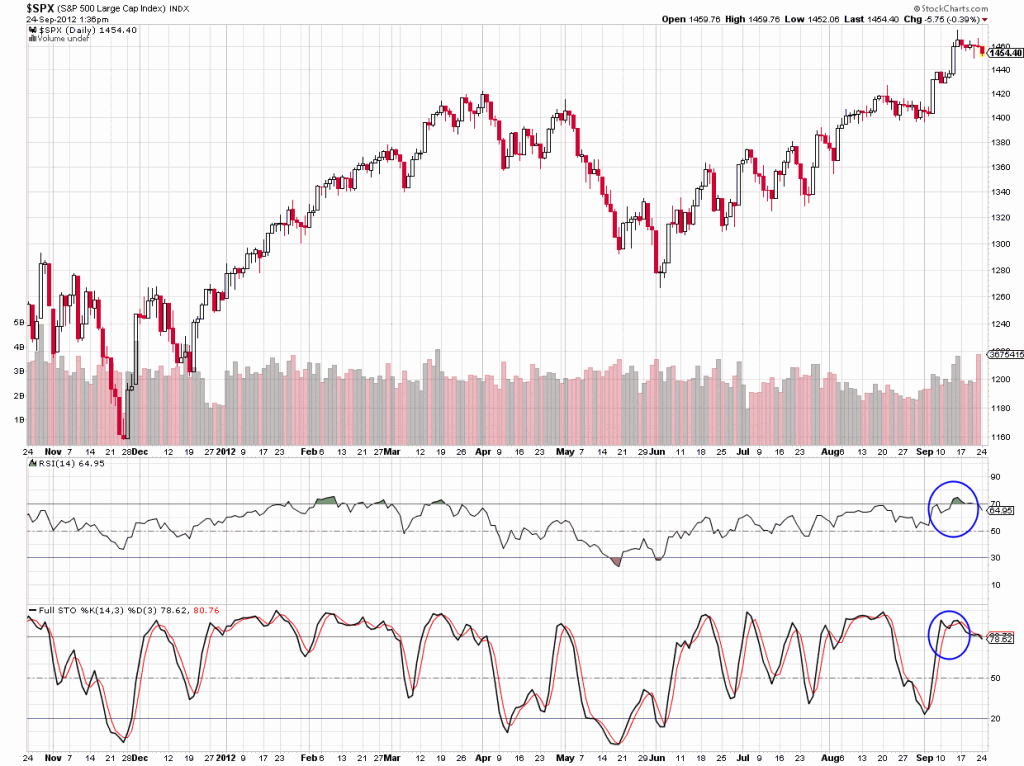 On top of the seasonal factors, momentum oscillators are overbought and rounding over at this time. Further, the divergence between the Dow industrials and Dow transports certainly suggests that markets are certainly ripe for a healthy pullback. The chart below shows just how significant this divergence has been.

I’m expecting that a pullback into the prior resistance levels of S&P 1420-ish could be seen shortly. This would provide an opportunity to move into sectors that will stand the most to gain from the current QE3 momentum play. I will cover these sectors in my sector comments later this week. 12-year resistance on the S&P 500 sits at 1500-1550. This is my ultimate target for the S&P, which could be achieved by or not long after the November elections. Thereafter, I am inclined to believe that markets will begin a topping process that will test those highs (or slightly overshoot them) over the winter, resulting in the potential for a substantial correction/bear market later in 2013. If you study the patterns surrounding the last two peaks on the S&P near 1500 (2001, 2007), you will note the complex tops that played out over a few months before the real bear-market shellacking began. My blog last week on QE price patterns   (https://www.valuetrend.ca/?p=1428 ) and the 5-year cycle that I have discussed on this site before (see chart below) suggest very little upside for the broad indices once our current QE3 rally plays itself out.

The Bear-o-meter read a cautious "2" last month. That reading on June 9th  turned out to be a decent reading, given the volatility we have seen since then. The arrow on the SPX chart below shows the END_OF_DOCUMENT_TOKEN_TO_BE_REPLACED

"Growth" stocks appear to be rather overbought when compared to their "Value" stock siblings. The chart below is that of the iShares Morningstar large capped growth index ETF (JKE). Its top holdings END_OF_DOCUMENT_TOKEN_TO_BE_REPLACED

Equal weight indexes give the same weight to each stock in the index.  Both small and large companies are given an equal  "importance" in the index. Most indexes are not the equal weight type. For END_OF_DOCUMENT_TOKEN_TO_BE_REPLACED