Home / What’s in store for the Great White North?

What’s in store for the Great White North?

One of my clients called and asked me about the fate of the TSX 300, given that it’s been in a bear market since its peak in June 2008. Of course, we all know the reason WHY the TSX has underperformed (commodities). But is there any hope of a breakout for this index in the coming months?

To start with, I’ll bring your attention back to a chart that I have posted twice on this blog. It’s a long termed commodity cycle that correctly called for a peak in the broad commodity basked in 2011. It also suggests a downtrend for commodities that may last for around a decade from that peak – let’s call it until 2020-ish. Here’s the blog with the commodity chart : https://www.valuetrend.ca/?p=2029

Obviously, it’s going to be an uphill battle for the TSX if this long commodity cycle proves accurate. The near termed picture is also a bit distressing. The TSX has been stuck in a sideways pattern with a ceiling at around 12,900 since 2011. That, in combination with the seasonal patterns for the TSX that I mentioned back in April (https://www.valuetrend.ca/?p=2073) gave me reason to sell out of my TSX index positions at that time. Comparative relative strength remains poor for the TSX vs. the US markets, and the 12,900 ceiling is once again a stone’s throw away. It is my opinion that new money should not be committed to the broader TSX right now. Instead, focus on specific sectors that appear attractive and exhibiting a strong trend. Otherwise, the better bet is to look to the US for new stock positions to gain the greatest upside potential. As mentioned on Monday’s blog, a near-termed pullback for the S&P500 back into the 1550-1600 would provide a good buying opportunity.

I was asked by an investor why I had gone from expecting a likely top for the US markets at around 1565, to my more recent bullish stance (albeit, with expectations of a near termed correction per above). The answer is simple: I changed my viewpoint when the markets provided evidence of a sustainable breakout through that level.

It is our job to profit by trading, not to cling desperately to a theme – too many people get swallowed by their own stubborn adherence to an investment thesis. They look for evidence supporting their thematic vision of the markets (“Back to the gold standard”, “Dow crash to 1000”). Searching for evidence to support your thesis – also known as confirmation bias – is unproductive. Instead, I like to review the charts and data with only one question: how should this be traded?  The mid-1500’s level for the S&P 500 was significant – it had been tested twice (and failed) since 1999. The recent breakout supports the likelihood that the 14-year sideways market is over for the US markets – evidence supports a new multi-year bull market ahead. Similarly, a break through 12,900 for the TSX that lasts more than a couple of days would stimulate me to become more bullish for the TSX. The charts rarely lie.

Isabel Gaines famous Whinny the Pooh character, in the book “Pooh gets stuck”, illustrates the downside of being stuck in any situation! BTW- the title of this book can conjure up the wrong image if you were not aware of this favorite childhood story character. 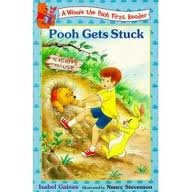