Normally, we look at VIX levels to determine how understated or overstated the implied volatility of the stock market, via the CBOE options premiums, may be. High VIX levels – anywhere near 35 — usually signal a market bottom or the end of a corrective period for stocks. That’s because high VIX levels indicate capitulation and fear through overzealous volatility premiums by options traders.

Low VIX levels – somewhere near 12 – signal a higher probability for a market correction, or the end of a bullish period for stocks. That’s because a low VIX reading indicates a certain level of complacency by options traders –and complacent is one thing you don’t want to be when trading stocks. You can see these tendencies  on the long termed VIX chart below. The VIX doesn’t stay still forever.

But what about trends on the VIX indicator – especially when viewed in conjunction with trends on the S&P 500? The chart below may appear to be a bit confusing. But I’d like to walk you through it to see if we can’t spot some tendencies for market movements as determined by VIX trend analysis.

I’ll go through the observations in point form – feel free to add comments and your own observations regarding this chart. Remember, this is fairly new work for me–I’ve only begun studying the relationship of trends in volatility vs. stock market movements, and would be happy to hear of anything readers are exploring relating to this topic.  A reminder—I define a trend as a successive series of peaks and troughs in one direction (i.e. higher highs and lows in an uptrend, lower highs and lows in downtrends). Flat peaks and troughs indicate a consolidation pattern. Uptrends are best defined by their rising troughs, downtrends by their falling peaks. Following that protocol- and remembering that VIX can be a bit more choppy than a nice tidy stock trend, here are my observations: 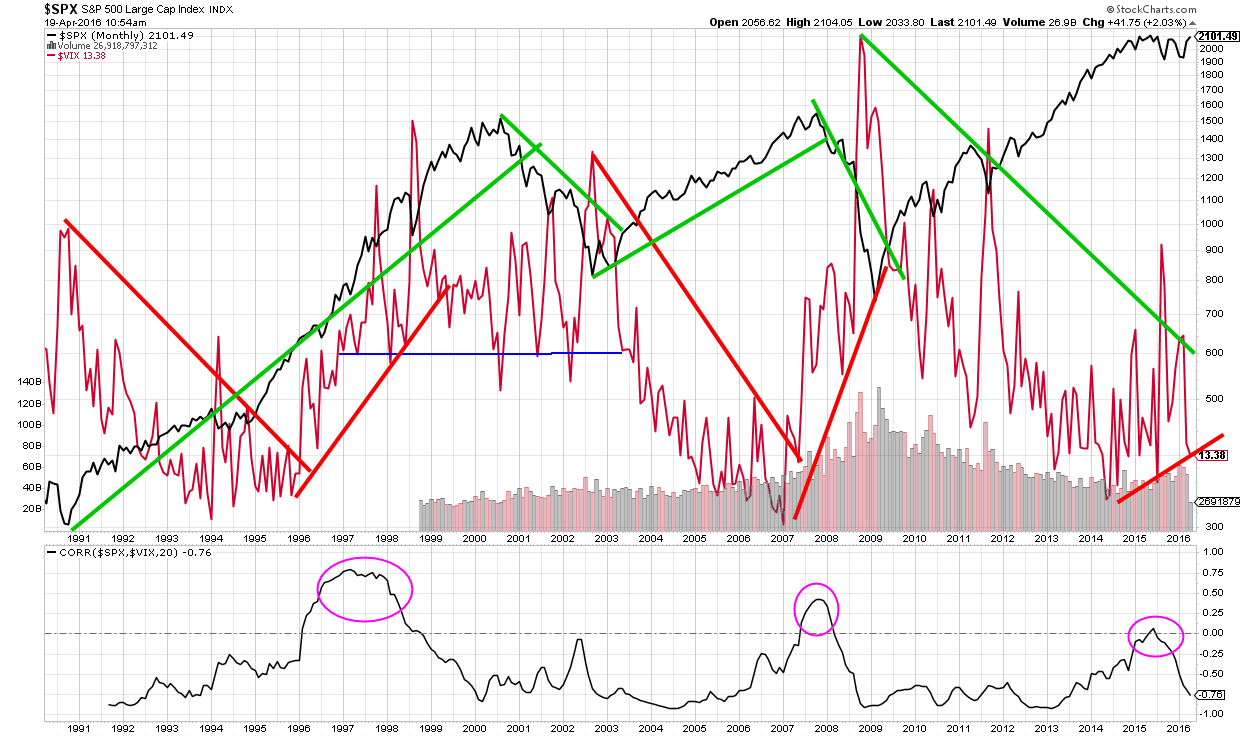 I’ve also drawn a correlation study (bottom pane) of the two indices (VIX vs. S&P 500). The correlation line (bottom pane) shows a tendency for a fairly negative relationship between the VIX and the S&P500—ranging from negative 0.9 to negative 0.5. This gives validity to using it as a measurement for market extremes and turning points. Since 1990, there were a few times that relationship failed—circled on the chart. They were: 1998 (“Asian Contagion” world stock and bond market correction), 2008-9 (housing/commodity bubble & crash) and recently. The correlation indicator briefly spiked into “neutral/ non-correlated” territory in early 2015. Hmmm…

The VIX is nearing the bottom of its historic trading range. Sitting somewhere near 13 at this juncture, the tendency is for a correction to follow on the markets somewhere within 2-3 months of this level being reached. Further, a series of successively higher peaks and troughs since mid-2014 suggests a new uptrend for the VIX. Meanwhile, a series of flat peaks and troughs (no new highs or lows) on the S&P 500 since early 2015 suggests an ongoing consolidation pattern for stocks. If history is a guideline:

–should lead into further choppy sideways, or indeed even a bear market for the S&P 500.

I was on BNN yesterday for their afternoon MarketCall show. Here is a video of the show opening, and my current market outlook.