Home / What to hold when stocks fall

What to hold when stocks fall

A bear market can be identified by the break in some technical parameters, as I have discussed in my book Sideways (lower lows, lower highs, a break of the 200 day SMA). Adding to the evidence of a break in trend, your analysis may also been aided by observing the negative correlation of some other markets. Some assets go up when stock markets decline. In this blog, I’d like to have a look at three markets that may, or may not have provided bear market safe havens in the past. Observing the charts of almost 30 years of history on the S&P 500, we might gather some clues as to where we might hide our money should a bear ensue. Note that on each chart, the S&P 500 is red, the opposing index is black. For this study, bear markets will be identified as a 20% + pullback – anything less than that is a minor correction. 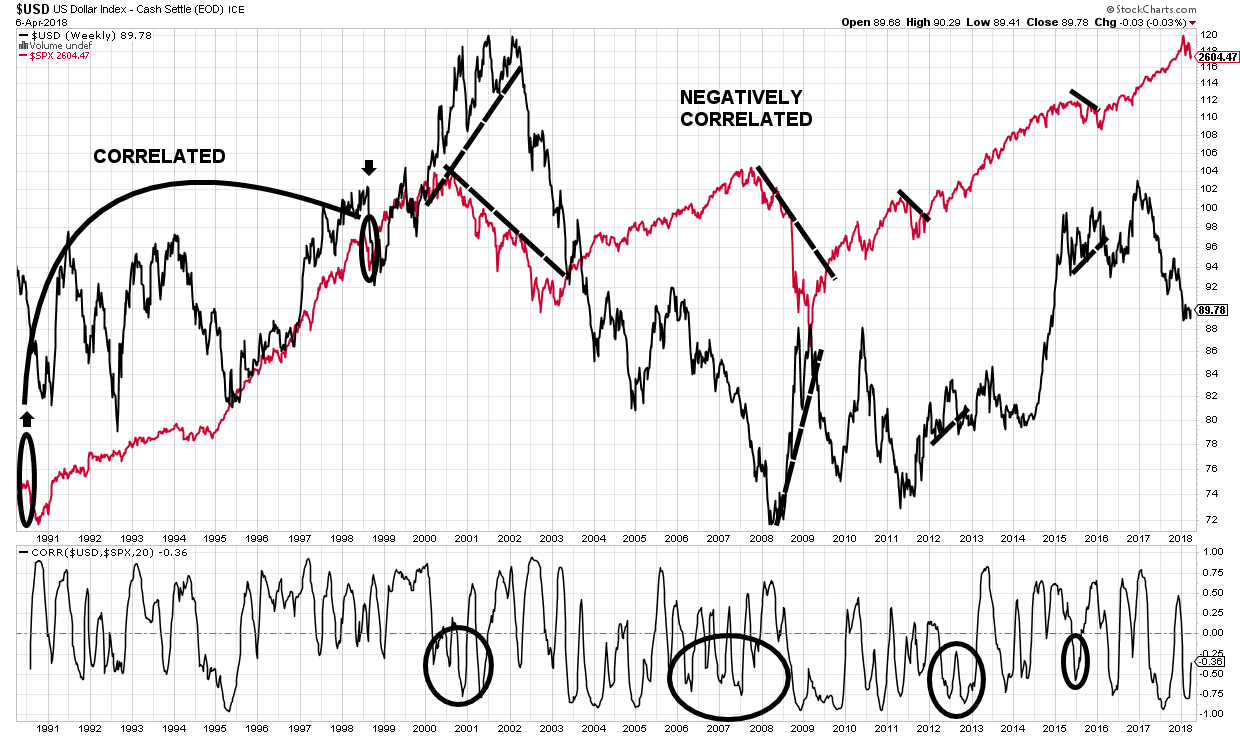 The recent minor corrective activity has not yet inspired a flight into the USD. 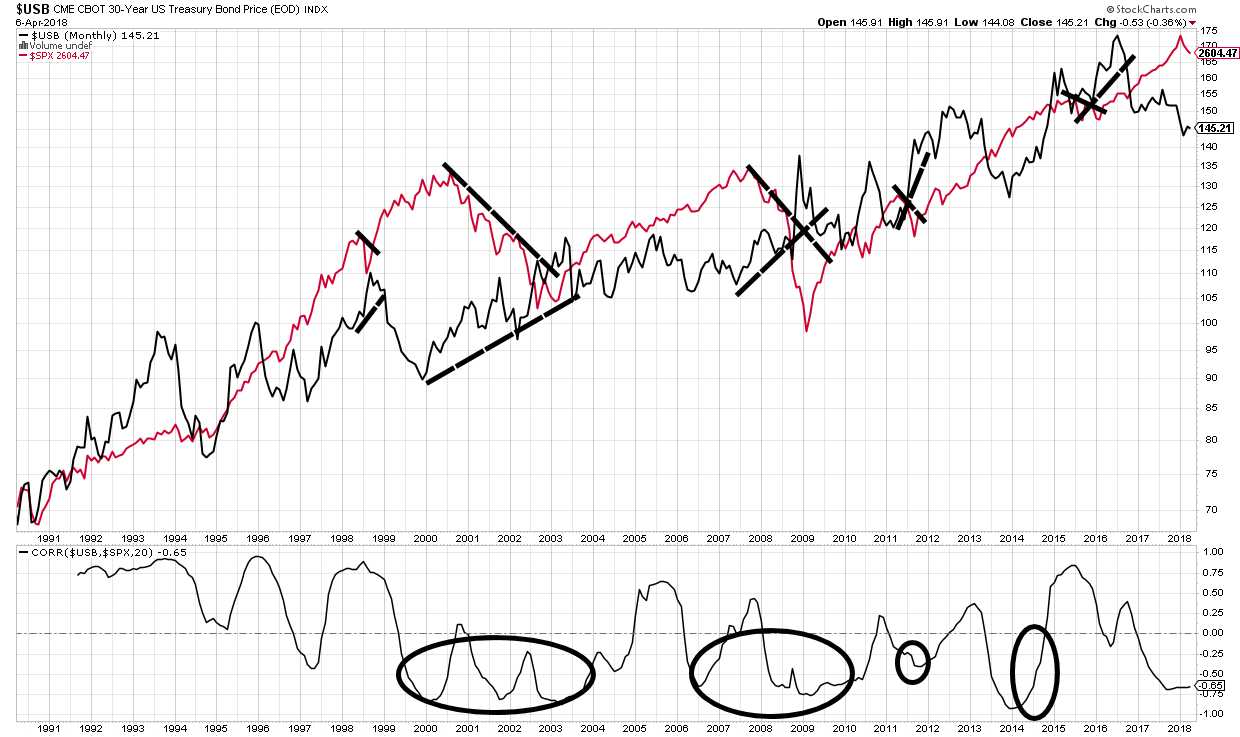 There is a definite relationship between the long bond and the S&P 500 during significant bear markets. Note the extreme movement into bonds during the 2001/2 and 2008/9 market crashes. There was also ample evidence of rotation into safety during the bear of 2011 and the significant correction of 2015/16. Even 1998 saw some minor rotation into bonds.

As with the USD, we are not observing this rotation in the current correction. 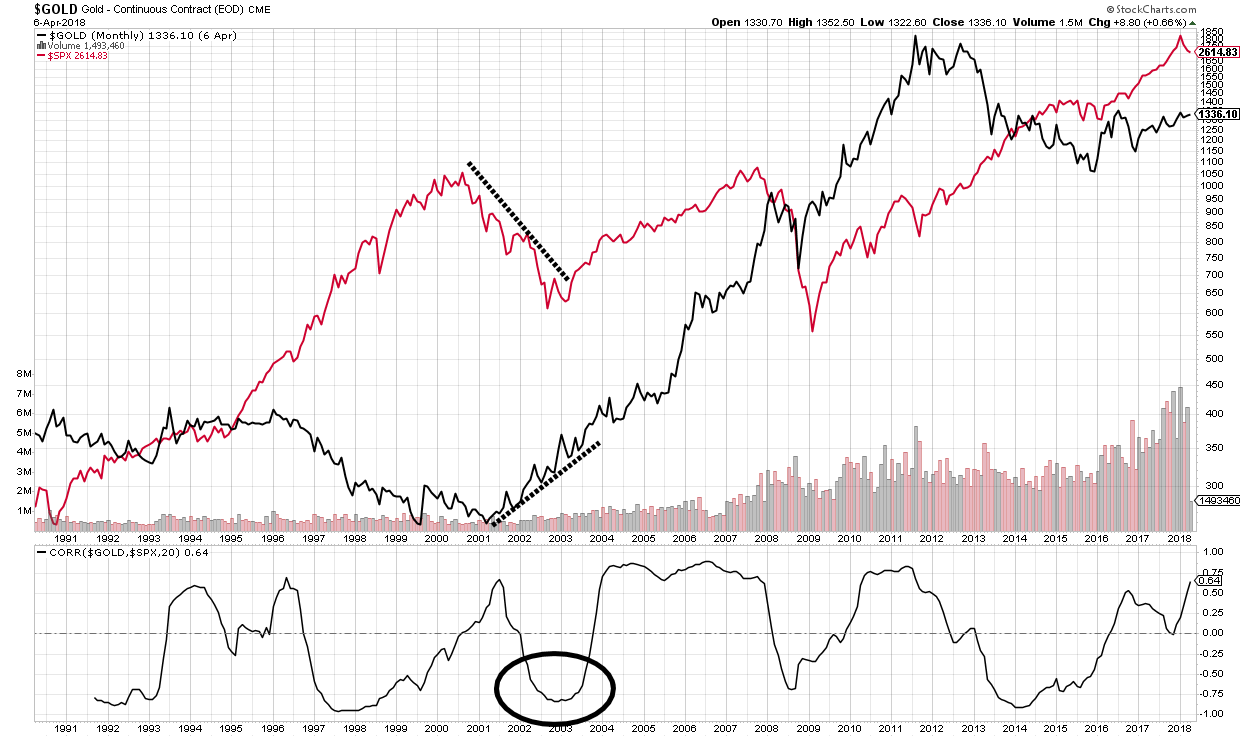 I post this chart to dispel a myth. Let me get right to the point. There is no reliable negative correlation between gold and the stock market during bear markets– at least there has not been a consistent negative correlation during the past 30 years. The chart above illustrates this fact. In fact, gold and stocks fell in tandem during most bear market periods – it was only in the 2001/2  bear that we saw gold rise. Further, the correlation line (bottom pane) illustrates a random relationship most of the time (2001/2 aside). They deviate in relative performance randomly, not specifically during bear markets.

Conclusion: Gold is not a reliable asset to move into during most bear markets.  Gold should only be bought on its technical merit, not as a hedge against falling stock prices.

Currently, the stock market corrective action is not occurring in tandem with bullish moves by the USD or the long bond. Further, the current market correction has largely being seen in the FANG’s and other overbought stocks like TSLA. Even in the tech sector, stocks with better valuations like AAPL and MSFT are not falling as greatly as the FANGs. Therefore, it is safe to suggest that we have not likely moved into a broad based bear market…yet. The current correction is largely technical – removing the irrational exuberance from the markets in the overbought FANG stocks – something that I talked rather frequently last year on this blog, this blog and this blog. I also covered the FANG’s (actually, the FAANG’s including APPL) here recently.

Keep an eye on the dollar and the long T-bond. If they see substantial bullish trend changes while stocks correct, that will add a strong piece of evidence to the probability of the onslaught of a new bear market. A purchase of those assets via an ETF or otherwise might be warranted as a hedge if/as/when that potential occurs.