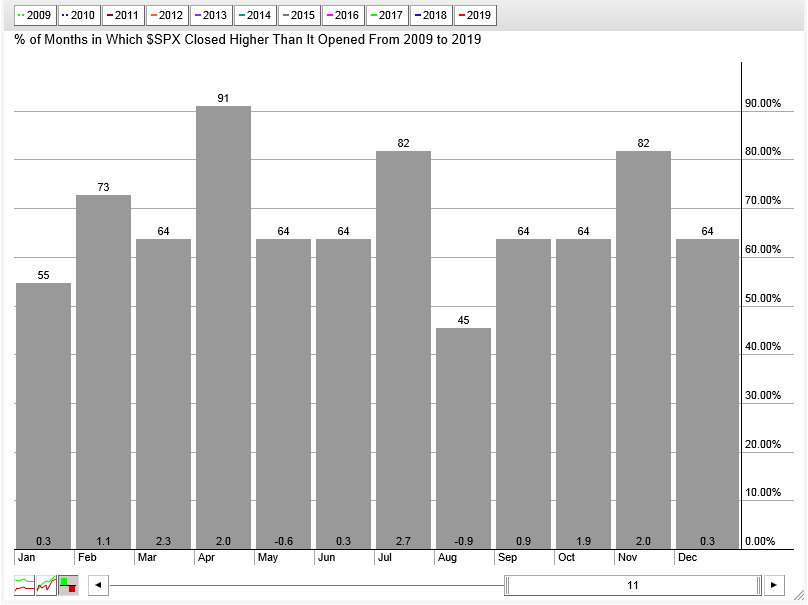 Seasonal reasons for a softer January

Above is a month by month seasonal chart for the S&P 500 from 2009 to the end of 2019. The chart shows us how often the SPX has a positive return in each month over that 11 year history. If you go back further, much of the same pattern exists with a few variations. One consistent seems to be January. Over the long term, January is a pretty unpredictable month. It makes or loses money without too much bias to either outcome. Contrast that with April, where the SPX has made positive returns very consistently – seen on longer termed horizons as well.

Technical reasons for a softer January

I’ve been working on my new book on contrarian investment strategies. One of the more basic indicators I am covering is the angle of ascent or decline of a recent move when compared to the historic angles. A steeper than normal angle of ascent is much like any sentiment indicator, in that it can signal irrational exuberance by the crowd. Since March, we have a fairly parabolic looking chart on the SPX. The chart below illustrates this extreme angle of ascent. Markets tend to regress a bit when investors find even the smallest reason to take profits after such a move. I’ve marked some of these sharper than normal moves (up or down) on the chart with small black trendlines. Note the resulting reversals. I’ve circled 3 times where the market was also ahead of its 200 day SMA by more than 10%. The combination of a parabolic chart that’s currently 15% over that moving average can increase the potential for a correction. That’s where we are now. 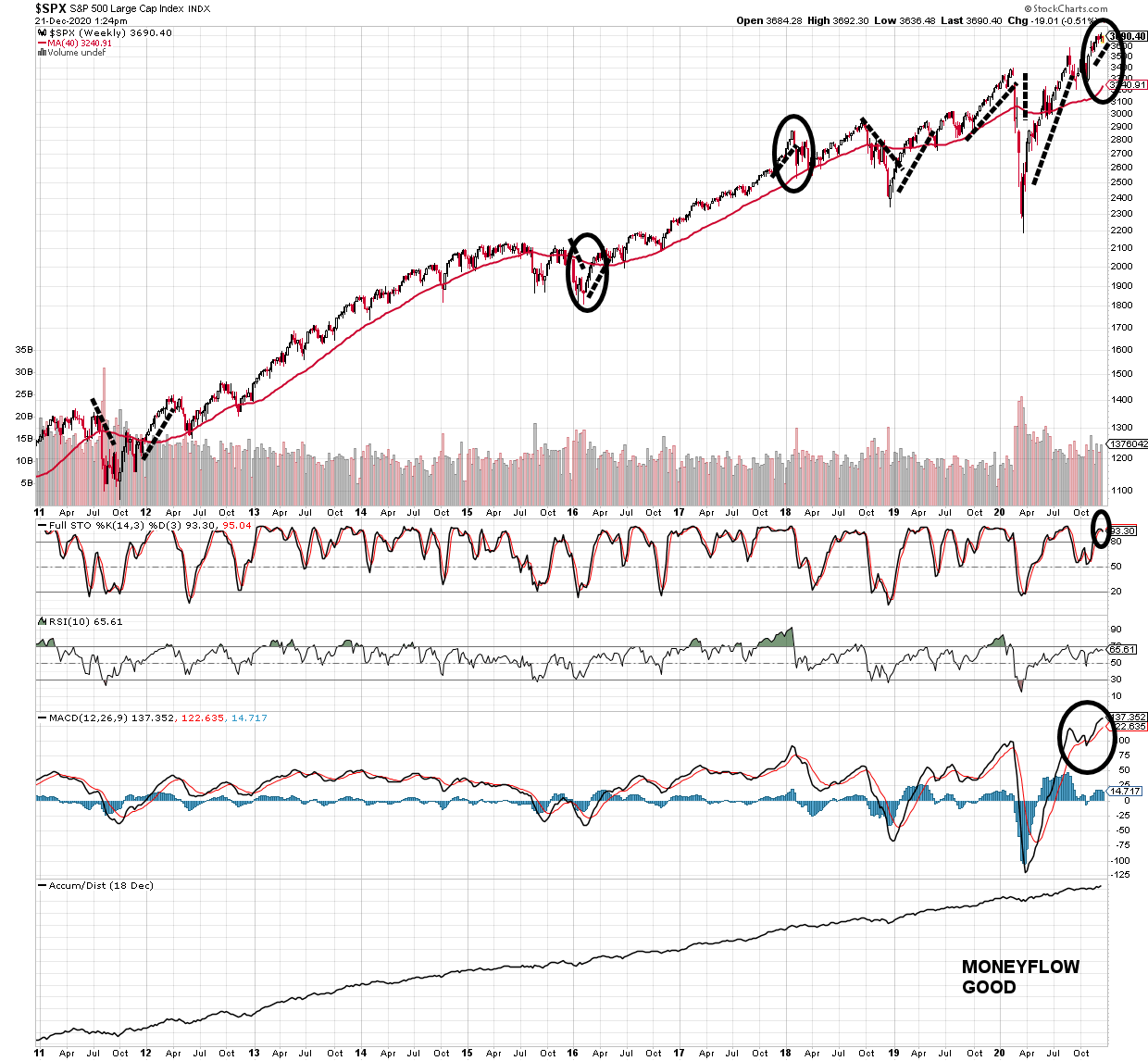 I read a funny line by one analyst who was trying to describe the influence of Robinhood Investors on the market (small retail accounts, usually consisting of relatively inexperienced investors who trade less quantitatively). He said “The inmates are in charge of the asylum'”. Too funny. Below is one sign that the inmates may indeed be running the the asylum of the recent parabolic market.

Sentimentrader.com has segregated small traders with opening positions to create a retail-investor influenced reading of the put/call ratio. I’ve posted their entire data file on this indictor, which goes back to 2000. The left side of the chart shows us that these investors were aggressively under-buying puts vs. calls in the late 1990’s technology bubble market. The low line on the chart illustrates this tendency. While this imbalance lasted a few years, it ultimately resulted in the massive crash of 2001. Of course, right when the market had bottomed in 2002, these small options traders bought protective puts aggressively.

The indicator can be better utilized when looking at neartermed market movements by the depth of its moves. Whereas a prolonged period of low put/call ratio by these folks can eventually lead into a crash as it did in 2001 and 2008, the indicator can also point to minor moves when it gets too deep, or too high. Right now, the indicator is fairly deep into complacency territory. That doesn’t suggest a market crash. But when we add it to the factors noted above, it might just provide enough evidence to remain a little cautious in the coming weeks. 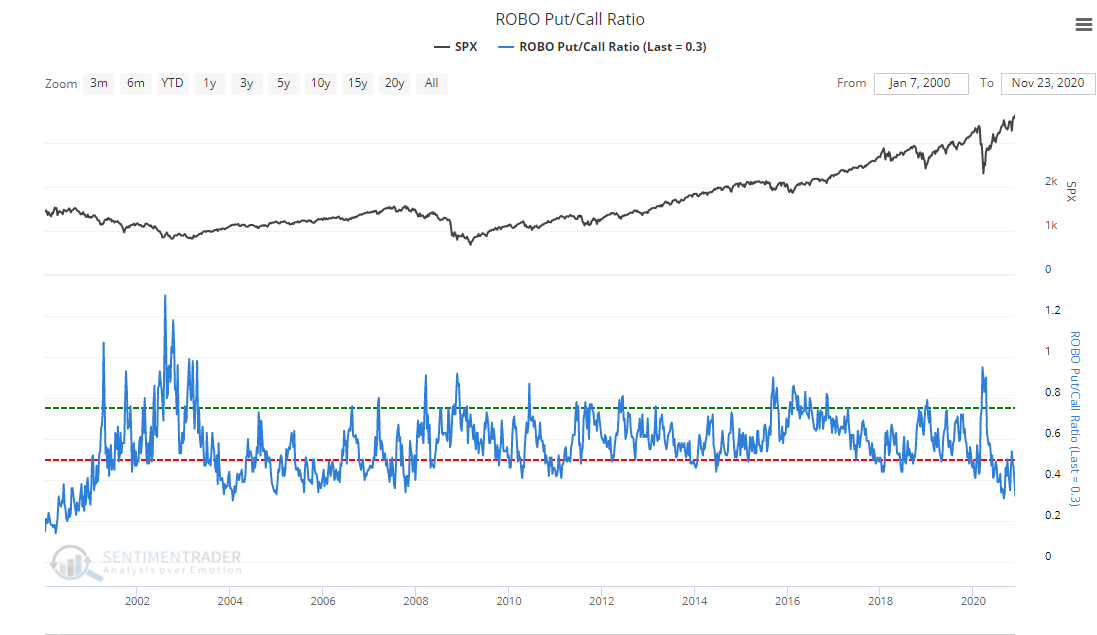