Home / Watch out for false rallies in growth stocks

Watch out for false rallies in growth stocks

The recent selloff by some of the sexy growth names like TSLA, AAPL, the solar stocks (eg-TAN ETF) triggered a massive move in Value stocks relative to Growth.

The IVE (value ETF) and IVW (growth ETF) really started to diverge dramatically in the middle of February. While this discrepancy is becoming increasingly noted by investors (who ignored value in the past), positioning can still push the two further apart going forward.

Here is the value chart. Nice uptick in Feb & March:

Compare that to the growth chart. Big drawdown in Feb & March:

Investors focused on growth, clean energy, and “stay inside” names throughout the pandemic. Meanwhile, they ignored other areas of the market. Back while that was happening, I was pounding the table that this wouldn’t last. I felt that a rotation into value was inevitable – the sexy stocks were ridiculously overbought, overpriced and overhyped. And here we are today, witnessing that rotation.  True, that mentality won’t completely reverse in just a month or two. However, things move much quicker these days. A transition from growth to value might have taken a year to play out when I was a relatively new Portfolio Manager in the 1990’s. Now, its all about momentum, and momentum changes direction hard, when it does change.  Gains beget gains and losses beget losses in this new environment.

My opinion is that the value vs. growth rotation is just getting started. That rotation won’t be smooth and easy. The market is still programmed to buy growth dips – like Tuesdays big NASDAQ pop.  Investors should expect violent  swings as the transition into a value-dominant market develops. But make no mistake about it, I intend to remain focused on value, as I have been for 8 months, and I will not be sucked into the (likely) temporary moves on the growth stocks.

In other words: Although a Nasdaq bounce looks likely after the recent pullback, I continue to believe rallies should be sold!!

There is a clear loss of upwards momentum in technology – and resurgence into value.

More importantly: In the years following those thrusts, Value stocks crushed Growth stocks! In fact, when you get such a dramatic move as we’ve seen into value, it turns out that’s more the rule than the exception that value will continue to dominate the markets for substantial timeframes. SentimenTrader looked back too the early 1900’s and found this rule has been consistent (they note 8 such rotations). The chart below, courtesy of SentimenTrader, illustrates the spikes in value outperformance in 1992 and 2001 (bottom blue line) that lead the markets into sustained relative performance of valued vs growth (yellow arrows). It would appear that we are in the same position now. 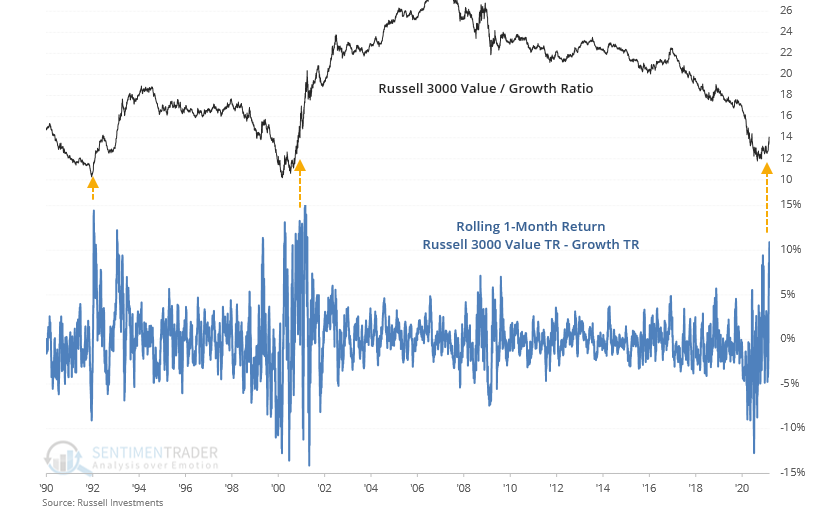 Its not just the NASDAQ

Because of the S&P 500’s general bias toward Growth stocks, this means that it tended to perform pretty poorly after these signals according to SentimenTrader. . I have been harping on this strategy (SELL growth, avoid indexing, BUY value and reflation names) for at least 6 months now. Recent blogs have covered sectors like materials, oil, coal, airlines, tobacco, staples, utilities. Be selective in these sectors. There are reasons to be a stock picker rather than an ETF sector trader these days.

I have also been suggesting to diversify OUTSIDE of the USA, with a particular eye on commodity focused economies. Like Canada and the Emerging markets. My only caveat re the TSX (which we hold both commodity names and and index ETF) is that our current Canadian government wants to squash the very industry sectors (commodities) that will be in demand during this transition. This drives me to believe that a healthy allocation into EM, and Europe, aren’t such bad places to be.

As far as why I like Emerging Markets – Some of the EM countries like China and India use the stuff – so its inflationary to them. Be mindful of technology stocks (eg – the KWEB ETF) in China which do not react well to inflation: 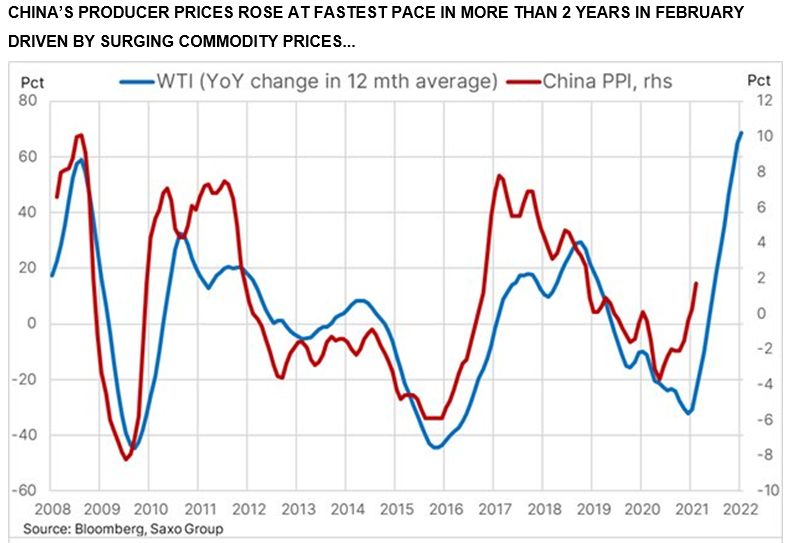 Some of them (Chile, Brazil) make the stuff. Producing countries benefit from reflation in the USA. Disclosure: we own the Chile ETF, which you will note is breaking out–chart below:

Those of you who follow this blog, and who listened to me over the past 8 months when I recommended this shift are in the same position as ValueTrend: Outperforming – with less risk!

Going forward, I would continue to recommend this strategy over buying the tech stocks and the NASDAQ.  “Buy the dips” is now “Don’t buy just because it dips”. Adding to the pressure: Biden is not a tech-friendly President as Trump –  I have noted this in prior blogs. Just announced: Longtime tech critic Tim Wu is joining the Biden administration as an adviser on technology and competition, a signal that the White House is likely to push for policies that rein in Big Tech.

There are too many forces working against growth & technology stocks, and too many seismic changes that will drive money into value and reflation names to take a passive approach. Note SentimenTrader’s findings of lagging performance of the SPX as this shift occurs.  If you are not already doing so, may I strongly recommend that you adapt a sector-rotational strategy. Or hire someone like ValueTrend to do it for you. Buying and holding index ETF’s is going to be a challenge during this shift into value & reflation names. The cap weighting in the big index ETF’s favors growth. In my opinion, that’s the wrong move.