Home / Wake me up when September ends!

Wake me up when September ends!

The rock band Greenday sang those words in a sentimental song about lead singer Billie Joe Armstrong’s father. There is little to be sentimental about stock market action during September. I have mentioned in past posts that the market will be very erratic as it attempts to put in a bottom, which could take weeks. Add in the traditional volatility of September, and you have a month that can flush out many market participants.  Thus far, the S&P500 seems to be finding support at 1120, which is the low point established early in August. The short termed trading range of around 1120 – 1220 will be put to a test this month.

By the way–dont forget to stop by for my presentation this Saturday Sept. 10th at 9:30 am at the MoneyShow at the Metro Toronto Convention Centre. You’ll learn about useful trading tools to help you profit in todays erratic markets. 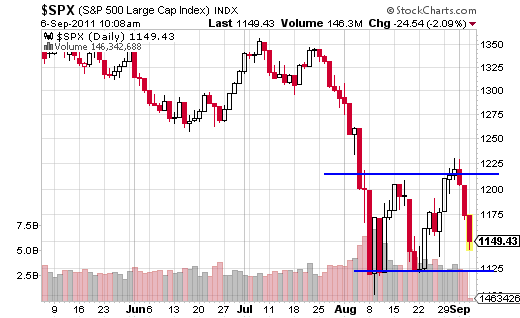 This week, I am very pleased to announce that Don Vialoux, who runs (in my opinion) the single best technical analysis website  available in North America has honored us with a commentary on current markets. Be sure to visit Don’s free site at  www.dvtechtalk.com

Ancient Chinese curse: May you live in interesting times! Times indeed will be interesting in equity markets this fall. North American equity markets have experienced exceptional volatility this summer. Higher-than-average volatility is expected to continue until at least the end of October. Higher-than-average volatility presents greater risk as well as greater opportunity. Timing of equity transaction will have greater importance than usual this fall.

First, the risk! The month of September historically has been the weakest month of the year for North American equity markets. Thackray’s 2011 Investor’s Guide notes that on average during the past 10 Septembers, the S&P 500 Index fell 2.36% and the TSX Composite Index dropped 2.55%.

Weakness in September is attributed to four annual recurring events that have been accentuated this year. The events are:

Hurricane season from mid August to mid October has yet to peak. One hurricane and one tropical storm already have damaged theU.S.economy during the current season.

The tenth anniversary of 9/11 has prompted government officials to clamp down on security for fear of a reprisal by Al Qaida following Ben Laden’s death. Imports of international goods into theU.S.have slowed and Canadians travelling to theU.S.are experiencing longer than average line ups at the border.

Next, the opportunity! Prospects beyond the third quarter earnings report season turn positive, seasonal influences improve and investor confidence increases from deeply depressed levels. Congress is scheduled to present a bi-partisan proposal by the end of November to address a growing U.S. government deficit. The proposal is expected to include major changes in entitlement programs, the main source of the deficit. Chances of enactment of the entire proposal prior to the next election in November 2012 are low, but the proposal is expected to improve the secular outlook for North American equity investing. After less-than-stellar third quarter earnings reports are released, analysts will start to focus on additional growth prospects in 2012. The stage is set for a typical year-end rally in North American equity markets that on average during the past 60 years has started on October 28th. Technical indicators will help to fine tune the seasonal entry point once again this year.