Home / How I view the TSX and oil trades

How I view the TSX and oil trades

I mentioned on this blog in September that, despite the possibility of the TSX reaching its old highs – I didn’t think those highs would be breached.  The TSX high of just under 16,000 had not been cracked -in fact its been relatively flat since 1999…coming up on 2 decades! I felt that rising rates and the rampant introduction of anti-business policies of the current government would give trouble to the long term outlook for stocks, and thus eventually put pressure on the TSX index as it approached 16,000 again. Obviously, that assessment was incorrect – albeit it may not be in the long run…

Nonetheless – I stand corrected at this time. The TSX is through its old highs.

Having seen the breakout by the TSX 300, we debated if we should buy the TSX as a broad market play via the iShares TSX 60 index. The problem with that index is the 20% weighting in energy. Oil has technical resistance at  current levels of $56.  We didn’t want to own a broad index with so much exposure to oil in case it fails (as it has historically) from that mid-$50’s level. The BMO low vol. ETF is basically the TSX index with a filter for the lowest volatility stocks- and it has much less oil exposure. So we took a position in that ETF in lieu of a TSX index ETF—as noted on my Top Picks on BNN last week.

Again, we will buy an oil stock (or two) if oil does manage to maintain its break through resistance. I’d rather wait for that, and still be in the TSX via a low-oil exposure ETF in the meantime.

The case for oil may be getting stronger. Looking at the WTI chart below, you can see the point of resistance being tested.. Energy producers and service companies have been lagging the rise in oil. It is my belief that today’s breaching by WTI oil of $56 would be a significant reason to buy into that sector if, and only if, it remains above that level. Give it another 2-3 days, then we might have confirmation of an entry point.

Should that happen, the XEG chart below shows us that there is at least a few dollars to go before the next level of resistance on that chart. A breakout through that resistance point is probable in the event of oil moving higher when it it’s hit. In other words, the producers look like they have some upside in them, should the current breakout on the underlying WTI commodity remain in place. 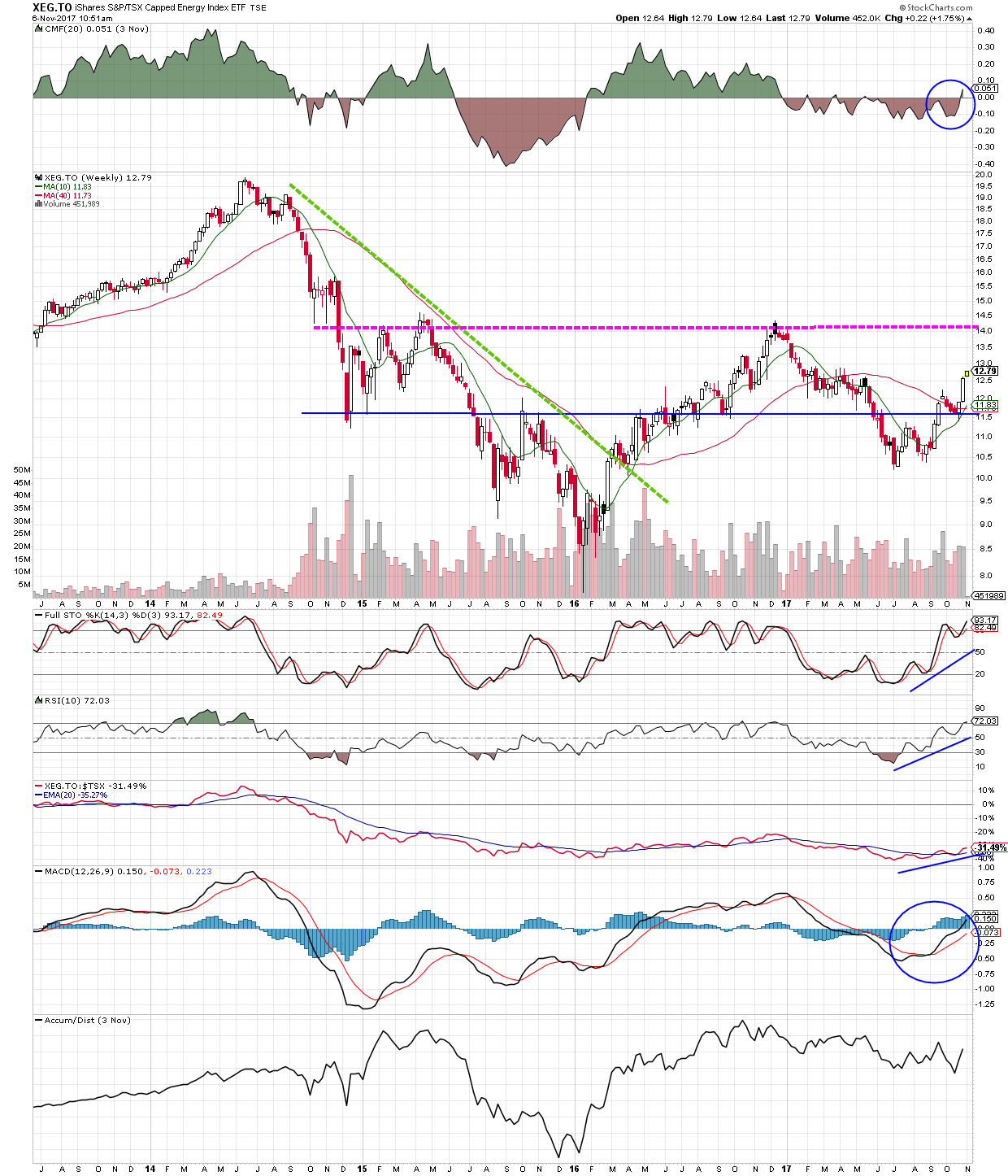