Home / Whats next for the NASDAQ?

Whats next for the NASDAQ?

Today we’re going to take a look at the NASDAQ and we’re going to take a look at its technical profile insofar as how much damage may still be to come, if any at all, and what might be the shorter term prognosis on the NASDAQ, as well. As you probably are aware, the NASDAQ has underperformed most market indices, it’s technology weighting, biotech, those sectors, which are very heavy in that index have taken quite a beating a lot of the stocks in that composite as well. I have harshly criticized over the past year some of these I like to call the stay inside stocks. These are companies like Zoom that I’m recording on right now, Peloton. Stocks that basically relied on online shopping and consumerism and people to stay home.

So that’s what has a pretty significant weighting in the NASDAQ, the FANG stocks, Facebook, Apple, Amazon, Netflix, and Google. All of these stocks have been underperforming. Apple, not so much I guess, but the other ones have, and it’s time to take a look at whether that underperformance of the entire composite which has other factors that have also underperformed like biotech. Is that the mode of operandi that we’re going to continue to see on the NASDAQ? So let’s get started. I’m going to share the screen and I’m going to bring us to the NASDAQ composite. Okay. So I’ll scroll down so you can see the indicators here, but I wanna start with a big picture. This is a weekly chart, but I’ve kind of condensed it. You’ve got right back to 2007 here. So you’ve got quite a few years.

And what I wanted to show was after the ’09 crash that the NASDAQ has been ’08-09 crash, I should say, the NASDAQ composite has been on an up trend. And one of the things that I teach you if you took my technical analysis course is to not just look at the percentage above the 200 day moving average that a market is, but also how far above a trend line the market is. And if we go back to the very beginning of 2022 this year, the NASDAQ, and this is a chart that I have shown before on my blog so this is actually a notation that I made way back in January of 2022 and I noted that the NASDAQ was 35.6%. So about 35 over this trend line that I’ve drawn and what you will find is that markets regress to their long term trend lines.

And sometimes they get overblown and you can see this happens over and over, and you’ll see some sort of a correction. It’s happened many times before. This move off of that long term trend line was the mother of all moves for the NASDAQ and it brought it way above. And so if we scroll down now a little bit, you know, we can look at the two long term indicators, and this is something else that I cover in the technical analysis course. You start with the macro picture and you work your way down. So if you haven’t taken the course, it’s on the website, you can go to ValueTrend.ca and you just click on technical analysis course and it’ll bring you to the link. I want to just note that the two major indicators that I talk about in the course that I like to look at to get the big picture are MACD and a longer-term rate of change indicator.

Now, with any momentum indicator, you can change the look back period, like how many periods the momentum indicator is going to look at to average out that momentum. So with MACD I just used the default, but you can see that in the entire history, going way back to 2007, MACD has never reached such a high level for the NASDAQ, at least in that period and that’s quite a long period. So this tells us that the NASDAQ was very oversold and by the way, over bought, I should say. And by the way, these in indications that I have on this chart, these arrows that I drew were done back in January. I’ve been warning people since late 2021 that the NASDAQ was overdone. I always say, if you don’t believe me, go check the blogs. Because one of the reasons I do the blogs is to create a track record for myself, not just through our performance, which is available on the ValueTrend website.

And you can see our performance has been very good, but more than that, I want you to see the calls that I am making. And I want the history to be there. I can’t lie and say, yeah, yeah, we were calling NASDAQ to go down if I didn’t really do it so the blogs are there for you to see. And I’ve been talking about the NASDAQ as being over bought and sure enough, it’s fallen. It took a while, but it did fall and it’s fallen pretty hard. The point now though, is that MACD has gotten into that oversold area. Now it hasn’t hooked up. Now my thoughts are because it was so high, it needed to come down quite a bit and sure it may be oversold enough that it could hook up. And we’ll look in a minute at some closer indicators, but you can see that it can do this. 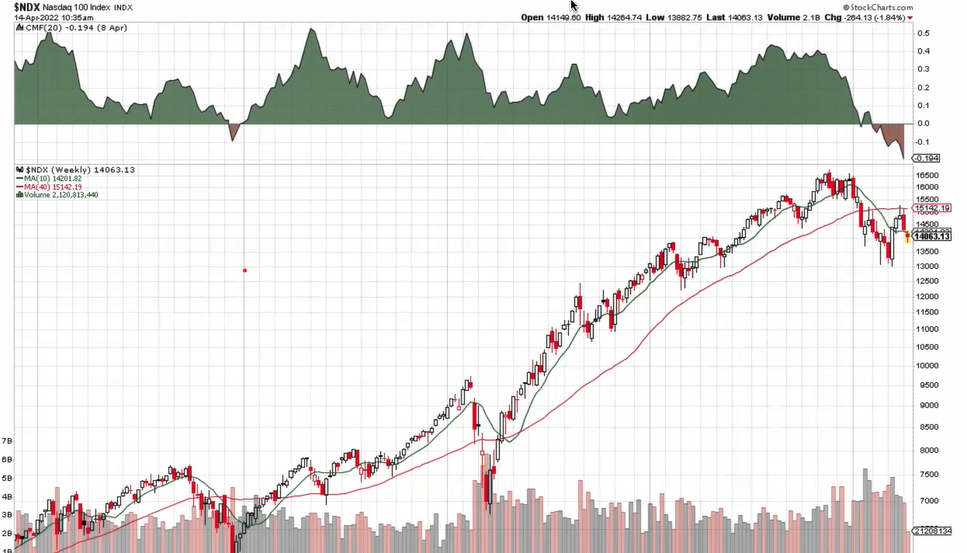 It can hook up. Here we had a pretty, pretty good sell-off in the COVID crash. And it did rally strong. Here we had a smaller correction and it rallied, but then it flattened out. The point this time though is that the peak of the NASDAQ was so high back in late 2021, early 22, that there’s a lot of overboughtness that needs to be corrected here. And I wonder if we get a rally, how long that’s going to last, because again, I’ll scroll to the top, you need to correct this massive move off of the trend line. And I’m not going to say that it’s gonna get back down in the 10,000 area from the 13 and change it is right now. But look where it’s come from. It was over 15,000 and pushing 16,000 actually and here, we’ve already moved down to 13 and a half.

Like there’s no reason it couldn’t get lower. And perhaps into the 11 or 12,000 area before this correction is done. So sure we could get a rally and an oversold rally. But how high will it go is the question? The other indicator I wanna look at is the rate of change and I talk about this in my technical analysis course. This is a biggie, and you have to use rate of change, in my opinion, only for the big picture because it’s a very simple indicator and it’s not weighted as many of the momentum indicators are such as RSI. It’s a straightforward, continuous look at momentum. And so it can fool you if you have a shorter period of time in the look back. In the major moves, though, it can be quite predictive. You can see it did catch the ’09, very nicely as a oversold.

This was overbought. It did correct, although not so sharply and you’ll see it didn’t go below the zero line. Now this time it was so overbought that it will not surprise me if it goes below the zero line. So we’ll see. But the point is that it too may be showing some signs of being oversold. And therefore you could see a rally. The question is how much of a rally and how much of this correction off of the trend line will be retraced. So I’m going to now look at the NASDAQ 100 and here it is. So the NASDAQ 100 is slightly different from the NASDAQ composite. The index eliminates all financial stocks for starters, and it places more priority on the technology and on the consumer discretionary staples, for example, not staples sorry, consumer discretionary types and services type of stocks. So you can see here where you’ll notice that let’s just go back to the NASDAQ composite again, and I’m going to, pardon me, I have to shrink the chart from my default.

On the positive side, we do see money flow momentum is getting oversold and that very well could suggest a reversal for the NASDAQ in the near term, but you’ve got those same problems. We are in mega overbought system. This is the RSI. This is Stochastic. These are oversold now. Stochastics has been trying to hook up, but look what it’s doing right now and RSI is definitely not convincingly moving up. MACD has not crossed over. This is just comparative relative strength to the S&P 500, but it has been weaker as we all know, and money flow, the cumulative money flow is not all that good right now. And hasn’t been that good since about the third quarter of 2021, as you can see way back in November is when it peaked. So all of my concerns about the NASDAQ composite in the NASDAQ 100 are that there is a big trend line correction probable.

We may get a brief rally on the NASDAQ, but we’re also coming into a seasonal period over the summer where the NASDAQ tends to not do so well anyways. And there’s a lot of momentum on the downside as far as what the NASDAQ has been doing. So traders are noticing this, people like me, technical people, and we’re bailing out. We didn’t have much exposure at all to the NASDAQ, but basically we sold, we had some Amazon, we sold that recently and we sold a semiconductor stock. I think our total exposure to anything technology-related and NASDAQ-related is about one and a half percent in the ValueTrend Equity platform. It’s very low. So we’re not convinced that it’s time to own NASDAQ or technology type stocks or growth stocks for the time being, even if there is a short term rally.

So take that for what you will. There’s probably an opportunity for those who are a little bit more aggressive in their trading to maybe trade a bounce. We at ValueTrend are not in that trade because there’s just as much risk that that bounce may not be as strong as we would need to catch a decent return on that trade. So it’s kind of a mugs game, I guess, is what I’m saying. The NASDAQ is a pretty uncertain to bearish looking chart and I’d be cautious unless I was a very aggressive trader. Thank you for watching. And I hope this helps and we’ll be back next week with a new topic. Catch you then.