Today we’re going to talk about why I feel that September, which is often from a seasonal point of view, is a relatively volatile month compared to many other months during the calendar year. I’m going to talk about why I think this September in particular, the second half of the month, we’re recording this on the 14th of September, why I feel this next two-to-three-week period may bring with it some extra volatility that we haven’t seen for a while. And I’m going to refer to some research done by a great company called sentimenttrader.com and they’re producing a chart that shows us the relationship of the VIX to actual volatility and how that’s deviated of late. 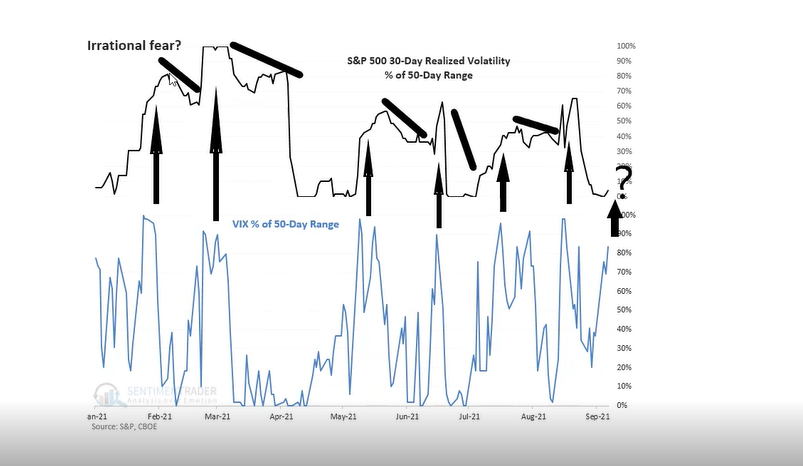 So let’s get right to it and go to the sentiment trader charts. So this is a chart courtesy of sentimenttrader.com. And what we can see is at the top, the level of realized volatility, actual volatility, you know, it’s smooth, it’s a 50-day average and against a 50-day average so, you can see if the line is high. That means that realized actual volatility is higher on a relative basis from its average of the past 50 days. So this is a zero line, meaning that it was pretty much in line with the average. So what we’re going to look at here is that the relationship between the actual VIX, the VIX, which is a measurement of option premiums. So VIX standing for volatility index shows us what writers of calls and puts demand in premium for the options that they are creating and writing that other investors can buy off of them.

These writers of calls and puts want a higher premium. If they suspect that volatility is going to pick up. Of course, they do. If prices might go up or down more than anticipated, they want a bigger premium cause they don’t want to be called or put on their options. So the fixed tells us the amount of fear. It’s sometimes called the fear index because usually it tends to move more aggressively on the put side of the world when people are, or I should say the options writers are becoming more fearful. So here we have the VIX, the blue line, and that too is a percentage of the 50-day range. And here’s the actual volatility. And you can see the two work together, of course, when volatility goes up. and we get bigger price swings than has been the norm over the past 50 days, then the writers of options get paranoid and they demand a bigger premium because they suspect there’s more to come when it comes to volatility.

And when the actual volatility slows down, you can see the premium start to shrink. So, the VIX goes up when volatility goes up, the VIX goes down when volatility goes down and it’s because the option writers are simply reacting to what’s going on, all right/ So very clear relationship, you know you can look at this over and over in this chart. When you see a downward swing in volatility, you see the big fall as well. So here’s something interesting, and this is what sentiment trader is pointing out. And I might also mention that Larry McDonald, the bear traps pointed out this exact same phenomenon, and that is that VIX premiums, so option premiums, the VIX level is very high right now compared to its 50-day average. And yet the actual volatility is very low and this is not the normal occurrence.

So what the options writers are saying is that I know volatility is low now, but we see it coming very soon. Larry McDonald of bear traps actually pointed out that this is the highest options premiums he’s ever seen in a low volatility environment. Very interesting. So if we assume that options writers are a little bit more investment savvy than ordinary stock investors, then perhaps they’re seeing something that we don’t. That’s an assumption and it’s hard to say, but historically, this is a chart of the S&P 500, and perhaps I don’t blame the option writers for becoming a little bit more paranoid and a little bit more demanding of the premiums that they charge on the options that they write. And the reason for that is because we have been since roughly April or May in a period of very, very low volatility.

So look at the S&P 500, and this is here’s May on the chart. And you can see that it’s been pretty tight. My band lines here are pretty tight. This is a measuring tool that stock charts offers. It’s the percentage you just measure the percentage of the drawdown or the move up. And as you can see the drawdown from the biggest swing that we’ve had so far since may has been negative 3.7%. That’s very, very small. If we compare that even to the period coming out of the COVID crash, which was basically March of 2020, even though the market went up aggressively. So this was not during a volatile period, the COVID period was volatile, but the market actually rose quite strongly as we all probably know between May of last year and well into the end of this year, but still, it had normal swings, normal price swings.

There was an 8% drawdown in June. There was about a 10% drawdown in the fall. September, imagine that there was another 8% are in the latter part of the year coming into November. And then a 5.8% is what that number says almost six in March of this year. So this is a kind of normal volatility where you get these five to 10% swings in an upmarket because things aren’t always perfect. People always have something to worry about investors move from one sector to another, to another, et cetera causes volatility. Well, that volatility hasn’t been happening lately. You probably saw my blog recently about how this exact same situation happened in 2017, where you had very tight volatility. In fact, that year there was not one correction that was above 3%, at least this period, we’ve seen 3.7, which is not far off of the 3% ceiling of volatility that we saw in 2017, whatever the case, the options writers are telling us that they feel worried about volatility.

And they’re worried now. Now, this information is very current. So if you watch this video a month from now, the story can be done, I’m posting this video as soon as I can. Just so you get the information on the volatility, and I hope, very much that you receive some good information here. There are no guarantees that there will be volatility, but history does tend to rhyme as they say, if not repeat itself. So my bet is that we may see some sort of correction just to bring us back to a normal trading environment.

And that’s really all, I’m imagining not a big bear market, but one of these normal five to 10% corrections is very much overdue. Can we call the time? I can’t but the option premium writers seem to be calling it right now to be listening to them? I don’t know, but I would just say that I know that this condition of low volatility won’t last forever. So I might just give them an ear.