Home / The NASDAQ is starting to look attractive

The NASDAQ is starting to look attractive

Hello, and welcome once again to the Smart Money Dumb Money Show. And I’m your host as usual Keith Richards. I’m president and chief portfolio manager at ValueTrend Wealth Management. And today we are going to talk a little bit about the NASDAQ. Now I have addressed this subject in the past through some of my blogs and videos. Some of you may recall that I actually believe the technology sector and to some extent, biotech, which are big sectors represented in the NASDAQ, are likely amongst the first to rally back when the current bear market ends. And we’re going to be looking at the NASDAQ in particular, because not only does it have a heavy weighting in technology and biotech, but it also puts an emphasis on growth names, even in sectors that are outside of those two major sectors. So it’s all about growth and the growth names pulled the market back.

They were over bought, they started the current bear market, and I think they’re going to end it by becoming the rotational subject of positive growth in the coming months. Now I’m going to present you with an argument today that could at least offer, on a couple of accounts, some thought that the bear market for the NASDAQ may have already ended. However, that’s an open issue. It’s not a statement. I am not suggesting that the bull market for the NASDAQ has begun just yet, but there are some positive signs. And I think we need to take a look at them today. So without further ado, let’s get started. I’m going to do the old share screen thing and bring you right into StockCharts. And what I want to do is focus on a few charts. I think I’ve done four charts here and one of them is a chart that I have presented on a blog in the past.

And what I was doing is measuring down the percentage of retracements during various market corrections on the NASDAQ. The other thing I was doing was measuring the length of time during those corrective periods that we saw the NASDAQ took to finish its draw down. So if we look at the great technology crash, and NASDAQ crash in particular, you will see that the draw down peak to trough was 78% back during the 2000-2002 bear market. Now, if you looked at the S&P over the same period of time, it was closer to 50%. So you can see that that bear market was just like the current one, largely driven by the growth technology names. Now, I mentioned on a blog recently that we really can’t compare the current period to the 2000-2002 period. And that’s because the stocks that were getting crushed during the 2000-2002 period, were largely garbage.

They were, you know, reporting false earnings like Nortel, or they were built up on hype and false hope that really wasn’t going to be materialized. Not to say that that didn’t happen this time. I mean, take a look at the Peloton and a few other stocks like that, which were bid up on hopes that everybody in the world would continue to buy into our exercise bicycles, which is a bit of a ridiculous assumption. So that’s not a growth model that’s super sustainable. Not to say that it’s not a good business, but it’s not super sustainable as a growth model. Global Crossings was one back in the 2001 era that just made no sense to me. They were going to lay cable across the oceans and feed, you know, some of the more emerging market nations and whatnot internet.

It was just, okay. So that was the kind of thing that was happening in 2001, 1999, 2000, 2001, et cetera. These stocks collapsed during that era because there was just so much hype and not enough behind it. But if we go back and look at the 2008-2009 crash, where it wasn’t really a technology driven crash, we had a 57% peak to trough. And it took about 19 months versus the 36 months in the great tech crash and the current crash so far, if you want to call it that, bear market has been somewhere in the neighborhood of 35% down. And I’m gonna present you with a little bit of evidence in a minute as to why there’s a potential that that may be all we get on the downside. Part of the reasoning behind that is, as I said, and I’ve blogged on this recently is that the two comparables are not the same. So the stocks that made up the NASDAQ, the quality of them in the 2001-2002 crash were nowhere near the same quality as the Amazon’s, Google’s, Apple’s, Netflix sustainable models of today. So that may be a fundamental argument as to why the current 35% draw down, or at least what had been a 35% draw down of late, may be all we get.

So it’s only been eight months of draw down. And as you can see, the draw downs in the past were much longer. So that could be an argument. We get more downside, but it is to be seen. So I’m going to be showing you a chart that might further strengthen the argument that the lion’s share of the current market sell off for the NASDAQ is over. So this is a trend line drawn from more or less the recovery after the ’08 crash. And you can see that since 2010, there has been a pretty defined peak-trough trend where you could draw a straight trend line and more or less hit most of the troughs. And this line, by the way, I presented on a prior chart.

And I predicted that this might be where we find a market bottom for the NASDAQ, and it kind of looks like it has made a market bottom right at the trend line. So that’s very interesting. The thing to keep in mind is that if we look at a closer view and we will be looking at a closer view in a minute but this closer view of the NASDAQ since its peak earlier this year, late last year has been in a trend channel where there have been rallies and troughs between two lines. So we may be testing the top of that trend channel line right now. And if it breaks that trend channel line, that would be very, very bullish, but if it fails and that’s right around right now, if it fails to break through, then you could see possibly a return to the bottom of that longer term trend line, somewhere around 11,000 or so on the NASDAQ. 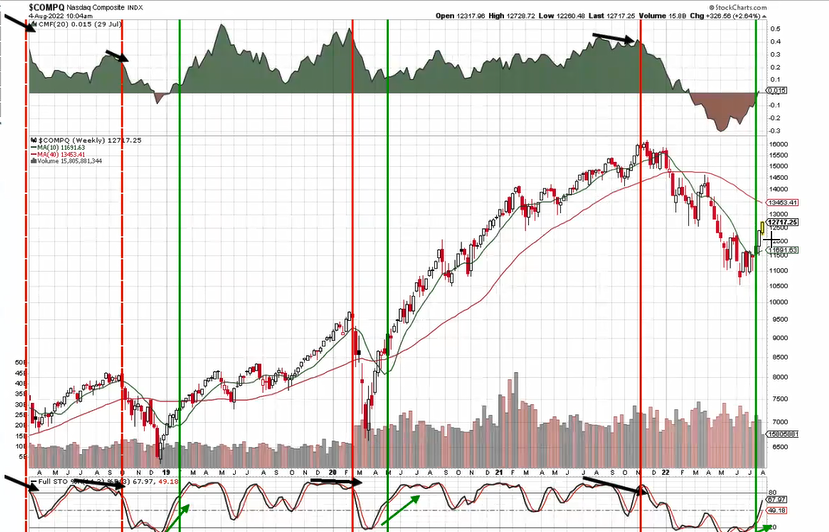 So we shall see. Again, these are just observations, not predictions, but for now, the observation I could make is that that trend line has held out. So that’s a good thing. So the next thing I want to look, you could, I didn’t draw the channel here, but you can sort of see that there is in fact, a channel. It may be breaking if we draw a more refined-looking channel line. So that could be bullish. Some of the other bullish factors are some of the indicators that I look at. So I’ve drawn red lines where we got bearish signals off of money flow, stochastics, RSI, and a MACD crossover and green lines, where we got the opposite. We got a hookup from these momentum indicators and in fact, a crossover on MACD and some renewed invigorating movement from a money flow perspective.

And you can see that the setups have been pretty good. When you got the combined crossover with the other factors moving up, you did tend to get some rally. So, and when you had the reverse, in fact, divergences in some of these momentum indicators, you had a top. Well, here we are and we just had a very nice crossover from an extremely low position on MACD on this chart. Meanwhile, we’re seeing, you know, a hook up in RSI and stochastics, and we’re seeing a hook up in good old money flow. So there’s an argument from an indicator point of view that supports the bounce off of that trend line we just saw and a possible beginning of a breakout of this trend channel. We’re right at the cusp of seeing if that’s going to hold, but there is some bullish signals that we’re looking at here. 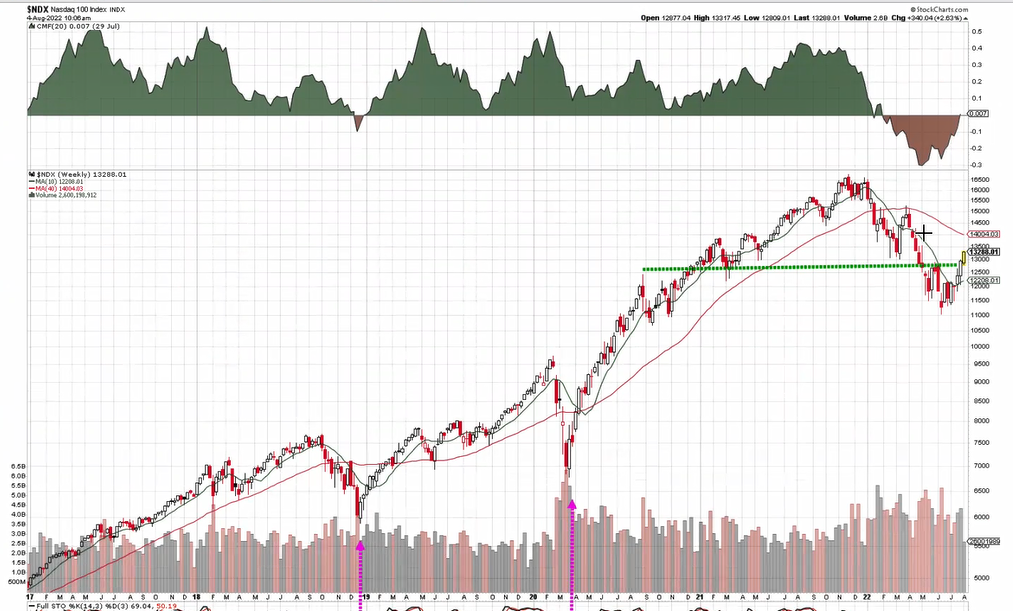 I believe this is the final chart I put up, and this is a big picture of the NASDAQ on the weekly chart. And it’s got some As you can see, there’s your money flow looking up again or breaking through the zero line. But this is a line that I’ve drawn at an old level of support. I’ve drawn a similar line, if you look on the blogs, for the S&P 500, and it does appear in the NASDAQs case to be breaking its neck line. Now, the S&P’s neck line was, as some of you who read my blog regularly, sitting around 4170. So the S&P 500 needs to break 4170 with conviction. That doesn’t mean 4172 and fail.

It means a conviction of break out through 4170 that lasts for several days. Haven’t seen that yet. In fact, it hasn’t yet broken 4170. I’m recording this on August 4th, so it could have broken out by the time you’re actually watching this. The NASDAQ, however, has broken a neck line somewhere just under 13,000, and it’s around 13,288 according to the screen that I’m looking at here and that’s definitely a good, solid breakup. So there’s lots of positives that we’re seeing on the NASDAQ right now. And I guess our viewpoint right now is so long as that positive movement can continue, particularly in conjunction with the broader market as seen through the S&P 500 and the Dow Jones Industrial Average, then I would say it would be a good time to start looking at lagging in to the NASDAQ, because I think they’re going to lead the market, particularly tech stocks.

They’re going to lead the market back to recovery at some point. For now, I haven’t started buying. So that’s my perspective, but that could change in the next few weeks. So keep an eye on the mark, make sure that the market continues to move in a positive direction, and remember you can’t catch the bottom so it’s okay to buy higher to confirm a resumption of a bull or to confirm a turnaround, which is what we’re looking at right now. So thanks for visiting and thanks for watching this video, and I’ll be back next week with another video. In the meantime, it’s going to be a really interesting thing to watch what happens to the NASDAQ and the S&P 500 over the coming weeks. We shall see. Thanks for watching.