I plan on doing this video once a week. It will highlight the main charts that I cover in my blog, which is www.valuetrend.ca. And I would like to recommend that, viewers of this video visit the blog because there are a lot more details and many more charts that are presented on the blog. And I’m trying to cover the highlights and maybe add a few details to a couple of the specific charts that I cover every week.

So, without further ado, let’s get to our first chart of the week, which is the S and P 500. And there we go. This is a short-term timing system that I’ve been using, and I really actually hate using the word timing, but, effectively what I do is I look at Bollinger bands and Bollinger bands move about two standard deviations, around the average movement of a stock. There is the moving average, and this is two standard deviations on either side.

And it tries to capture the majority of the moves of the S and P 500 in this case. The upper band during an uptrend is often ridden, as they say, it tends to ride the upper band. But I look at when the market is that either the upper or lower band, in conjunction with an extreme reading and overbought or oversold a reading on the stochastics, which is a very short-term momentum oscillator and RSI, which is a relatively short to medium term oscillator, but I’ve made it shorter by, by using only a 10 day RSI. When these line up to be overbought or oversold all at the same time, along with their respective Bollinger band touch, then I often find that the market will correct a bit. You can see that condition here is at the upper Bollinger band. 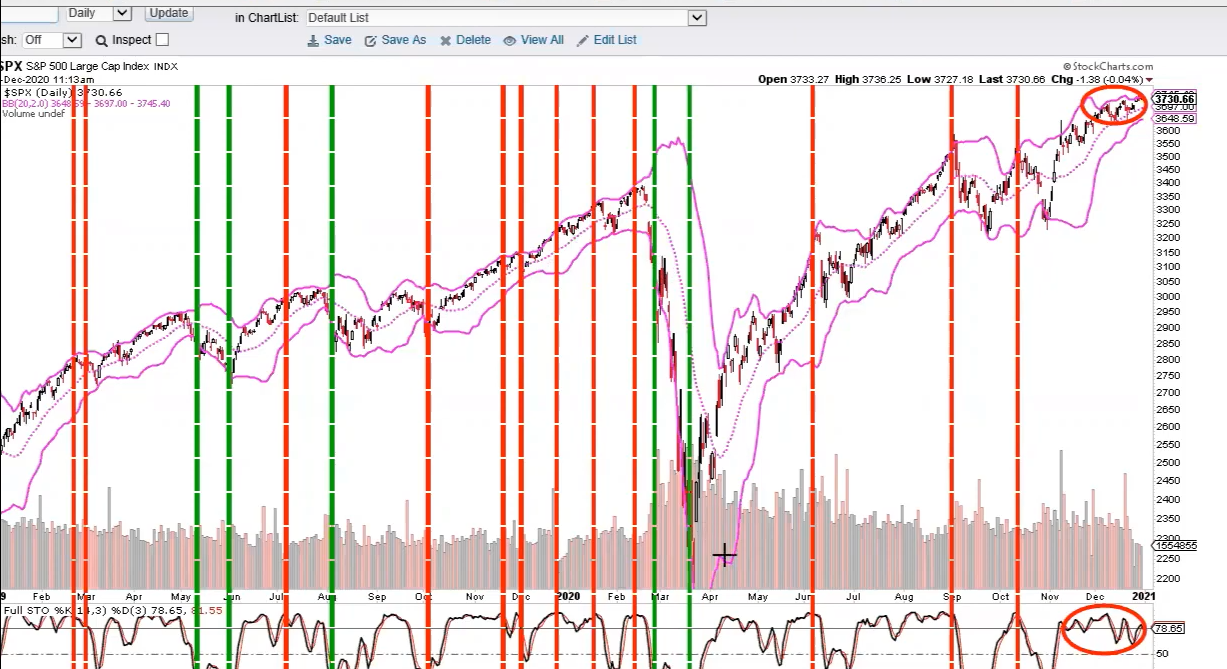 It was at the upper end of the stochastic. This is the upper end of the RSI. Boom, we’ve got a correction. It happens often enough that I pay attention to these signals. Now really, really important to understand these signals are very short-term in nature. So sometimes you get a touch and it’s almost nothing like these touches in here. Yeah, the conditions were there, but, but the pullbacks were almost nothing to talk about. Sometimes they’re more extreme than others. Okay. This was a biggie. You can see we got the, the green line is for a bottom Bollinger band touch along with oversold conditions. You can see, we got a signature in the COVID crash. We did get a rally right there, but then it proceeded to carry on and its downtrend and that’s, it’s going to work both ways.

These dashes we’re in an uptrend, you’ve got a short blip and then boom, off, we went, this one did signal the bottom, but it’s not really meant to signal the bottom of major moves. And the benefit of looking at this is that you kind of get a feeling for what might happen in the next couple of weeks. Big or little move, we don’t know. It’s usually small based on these signals, but if you’re a buyer, if you’ve got some cash, you want to pay attention to this because maybe there’ll be an opportunity coming very soon. If you get these conditions lining up with an overbought market, and that’s where we are right now. So we’ve been riding the upper band. We’ve been in an overbought stochastic situation and playing with the overbought line, although not as deep as some of the signals on the RSI. It suggests to me that there’s a decent chance in the next couple of weeks coming into January, that we’ll see some sort of a correction. I have some cash, maybe some of you do. If you have cash, it’s probably just a great reason to buy because it’s likely just going to be a short-term move.

The next thing I want to look at is natural gas and, and I covered natural gas on one of the blogs earlier this week. So let’s go right to the Nat gas chart, which is here. 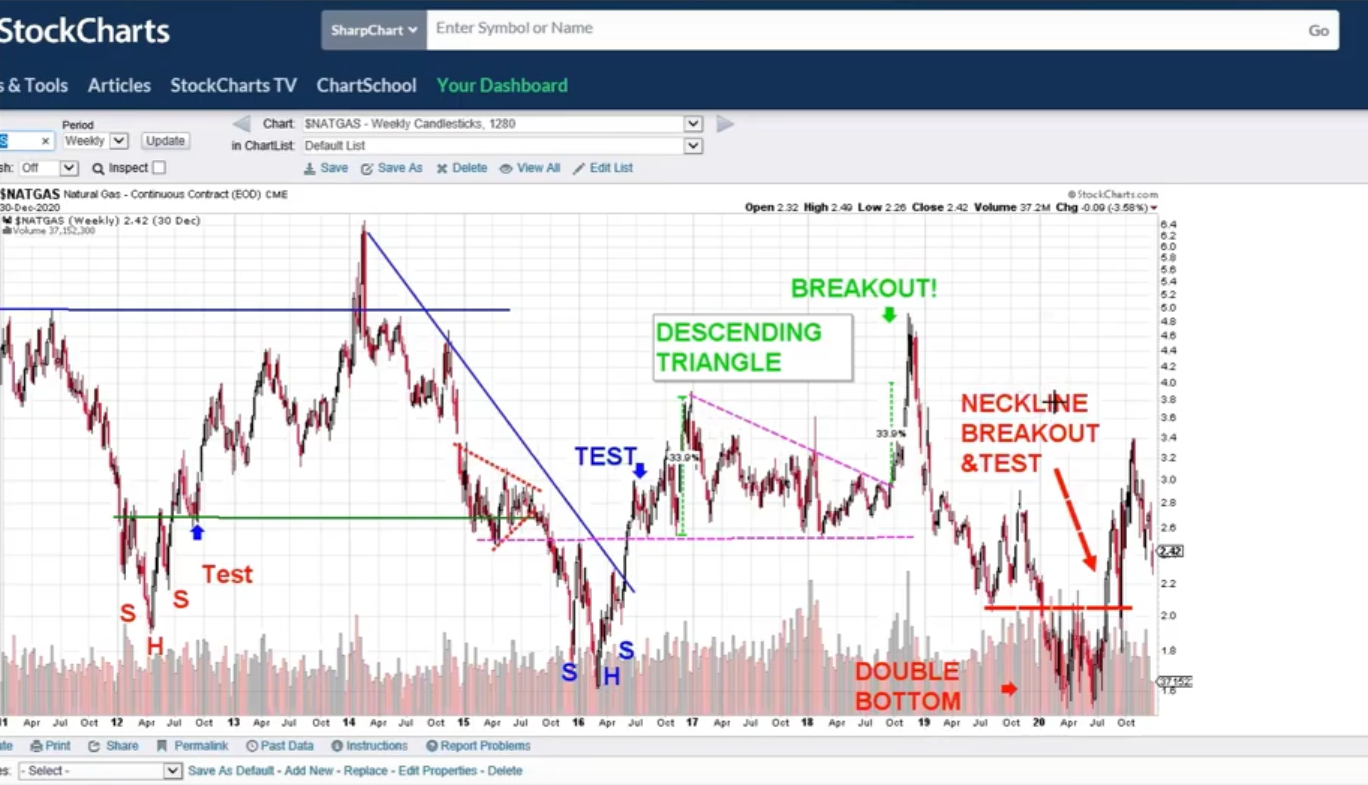 And you can see I’ve been tracking that gas for many years. In fact, you could go way back in time and you’ll see all kinds of notes that I’ve put on this chart. This is a weekly chart rather than the S and P chart we just looked at, which was daily. And you can see Nat gas is a pretty whippy commodity. It is not very smooth, but it offers plenty of trading opportunities.

And I recently identified a double bottom with a neckline break, and it was just perfect because, you know, there’s a touch there. Boom. And that broke double bottom touch. Boom. And it tested here and we were, we were buying a couple of Nat gas orientated stocks here in Canada just off of that test. We like to see a test proven. So, here we are, again, we’re right back into that test zone and I do feel that there’s a good chance that you’ll see Nat gas kind of come back into this consolidation area that we saw back in 2016, 17, and 18. And that would target around $3 on Nat gas it’s trading at two and a half. I wrote the blog. I think it was a two, two bucks just a few days ago. So there’s an opportunity possibly presented itself.

And I did note a couple of stocks. I’ll just address one of them that I had covered on the blog. And that’s this doc right here, which is it’s in the US there’s a couple of Canadian stocks we own, Tourmaline, which is a Canadian gas stock. Full disclosure. We own it personally and professionally and you know, everything we talk about here is not a recommendation that you should go out and run out and buy and Antero or any of the stocks I mentioned, but Antero looks typical of this sector where it, you know, I kind of fell like a brick over the past few years. And then this looks to have put in a bit of a bottom and that could be considered a neck line at around $4 and it looks to have broken that. So that’s very, very encouraging.

So, for people who are looking at a higher risk opportunity, cause Nat gas obviously is pretty whippy as you saw on the underlying commodity. And there’s a reason why this stock and others like it have suffered over the past few years. But if you don’t mind some risk capital in something, I think Nat gas has a good opportunity for those, with the tolerance. The upside, if it does work out to be a good trade, is probably into this old support level here, which is in the 16-dollar area. Well, you do the math five, five and a half bucks to $16, and you’re, you’re into almost a three-bagger. Who knows, right. We, we don’t know if that’ll happen. I certainly would encourage you to do your homework before buying any natural gas stock, but it looks to me like there’s some reason to at least examine this area.

So, thank you very much for watching. And I would just finish by encouraging you to read the blog, which is at www.valuetrend.ca. Also, refer people to this video series. Refer people to the blog because it’s free and it offers great information and the more people that participate in the comments section, the merrier.

And one final thing I want to mention is that if you personally have a need for portfolio management services, we’re not pushy people, but this is how we get our word out. And we display all the time through our educational series, such as this, how we do things. We are conservative investors. We pride ourselves in our lower volatility. And, if, if you or someone, you know, might need that kind of portfolio management, then please, consider our services.

Thank you for watching. I’ll be back next week with a new video and two new blogs. Happy New Year, hopefully, 2021 isn’t going to look anything like 2020 from a human point of view. But certainly, if it looks anything like the latter half of 2020 from a stock market point of view, it should be a pretty exciting time.

Have a good new year, and we’ll see you in a week.