We film this video once a week, which is usually a recap of my blogs with some extra colour, and you’ll be getting plenty of extra charts in colour today. Just a quick announcement before we get started, we are looking at a new zoom webinar boy, that was a tongue twister for me for a second. We’re doing it on January the 29th, at 11:00 AM. Now, by the time you see this video, I feel that you probably will have missed the window to actually participate. Fear not, we recorded the video and it will be posted next week. So you will be able to view it probably by the time you are seeing this video for future participation in any of our videos, I’d encourage you to sign up for our newsletter. It’s free. We don’t pester you with advertising or anything like that. And we’ll send you a notification of our webinars in the future.

So I wanted to get right into the main subject, which is oil, and that was my only blog of the week. And I’m going to give you a few extra charts that I didn’t present in the blog this week. Now, I’m just going to quickly outline a couple of things I talked about because you know, there’s a lot of argument about whether inflation is going to happen or not with all the money printing and whatnot. There’s an argument that I would tend to suggest is possibly convincing to you that inflation is coming.

Although you probably won’t see any spike in inflation for the next year to a year and a half or so. Don’t forget though, that markets tend to look forward by something like six, eight, 12 months ahead of time. It’s all kinds of theories on how far markets look ahead, but it’s no doubt that the markets are forward-looking instruments. So with that in mind, beyond the money printing with all that cash circulating and in people’s hands who have not been spending that cash due to lockdowns and COVID and whatnot, there’s that pressure, but on top of that, president-elect Biden has brought in a few new policies that I think are going to add to inflation. One, being that he is increasing the minimum wage across America to $15. So this is going to be inflationary.

The other thing is, and this is a biggie he’s going to demand an increased amount of American made content in things that we buy now, American labour and American cost of production is estimated at something like five times higher than Chinese costs of producing these same widgets, or even the parts that go in the widgets. So this is definitely inflationary.

You’ve got the fact that there’s a lot of money circulating out there. There’s a lot of anticipated spending with that savings and you’ve got a higher minimum wage and increased costs of those products coming in the next year or two. So there’s a lot of reasons for inflation on top of that, we have oil and gas, which has not been overly utilized even despite the cutbacks because of the COVID lockdowns and whatnot. Vaccines are being circulated. It’s going to take a while, but we’re going to see a reopening economy. We’ve got a taste of it just this past summer in 2020, as the economy somewhat reopened, wait till it really reopens. You’re going to have the driving season come back. And despite all the green movement and solar panels and electric vehicles and all that stuff, there is, there is a slower transition than I think the market is anticipating. 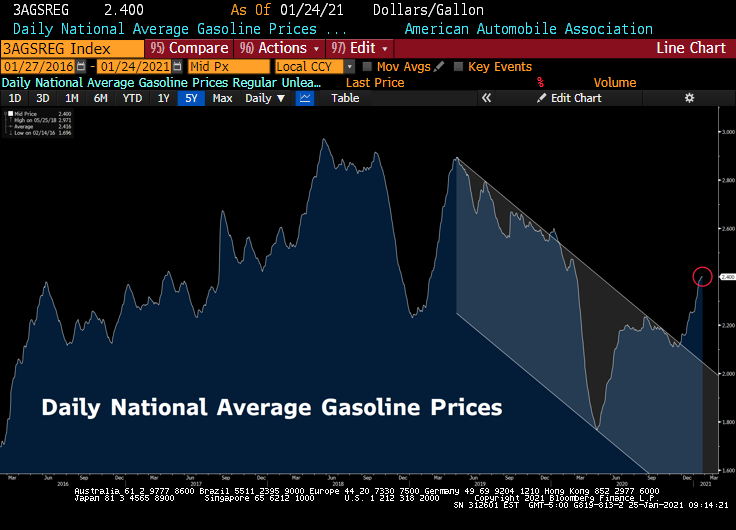 So what we view is there’s going to be a demand for oil and by the way, China and India, two of the fastest-growing economies in the world, and they are very large economies, have no interest in electric vehicles and solar power and wind power. They’re full-on into fossil fuels. So we have a lot of factors that will push inflation and oil and gas usage up in the next year. So even on the gas contract, this is part of the blog. You can see that traders have been bidding up the price of gasoline, and I’m just going to tie that into a couple of other things. I think we ought to take a look, okay, this is this stock charts.com seasonality chart for WTCI Oil – crude oil. And you can see in January right now, as I record this oil only tends to do well about 42% of all January since 2010. 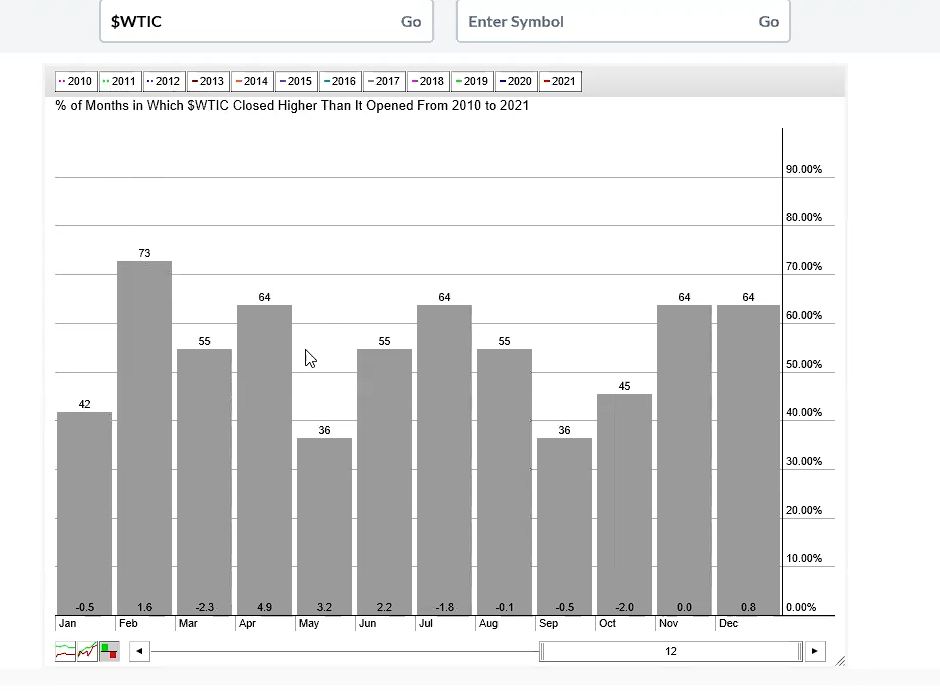 And the reason I chose 2010 is there was a, there was a crisis surrounding oil and whatnot in ’08, ’09, so I want to take that out of the equation and get the pattern over the past decade or so. So only 42%, but less than half of January has been positive in the past 11 or 12 years, whereas 73%, in fact, the best months for oil is February, but you’ll notice that it’s definitely slanted towards positiveness coming into May. Now May you’ll find oil prices tend to on average not do as well. So you’ve got three very good months for oil after a bad month buying oil right now might not be a bad thing. My view though is even longer-term than just the next few months because of those pressures that I just mentioned.

I think oil is going to have a bid over the next year or so. And here’s the oil chart. Again, something I didn’t put up on the blog, but WTIC, you can see these are my notations. I’ve been trading oil for a very long time. You can see that there was some support around $50. And my view is that oil will get to somewhere in the $65 over the next year. Yes. If you look at some of these technical factors like stochastics, we’re seeing that it’s a little overbought and whatnot, but I just wanted to let you know that my view technically is fairly bullish on oil. So finally, I’m going to just quickly refer back to the blog and just note the Canadian producers chart, which is despite the pullback, and it was a bit overbought, as you can see here. Despite the pullback, it’s playing with the neckline. 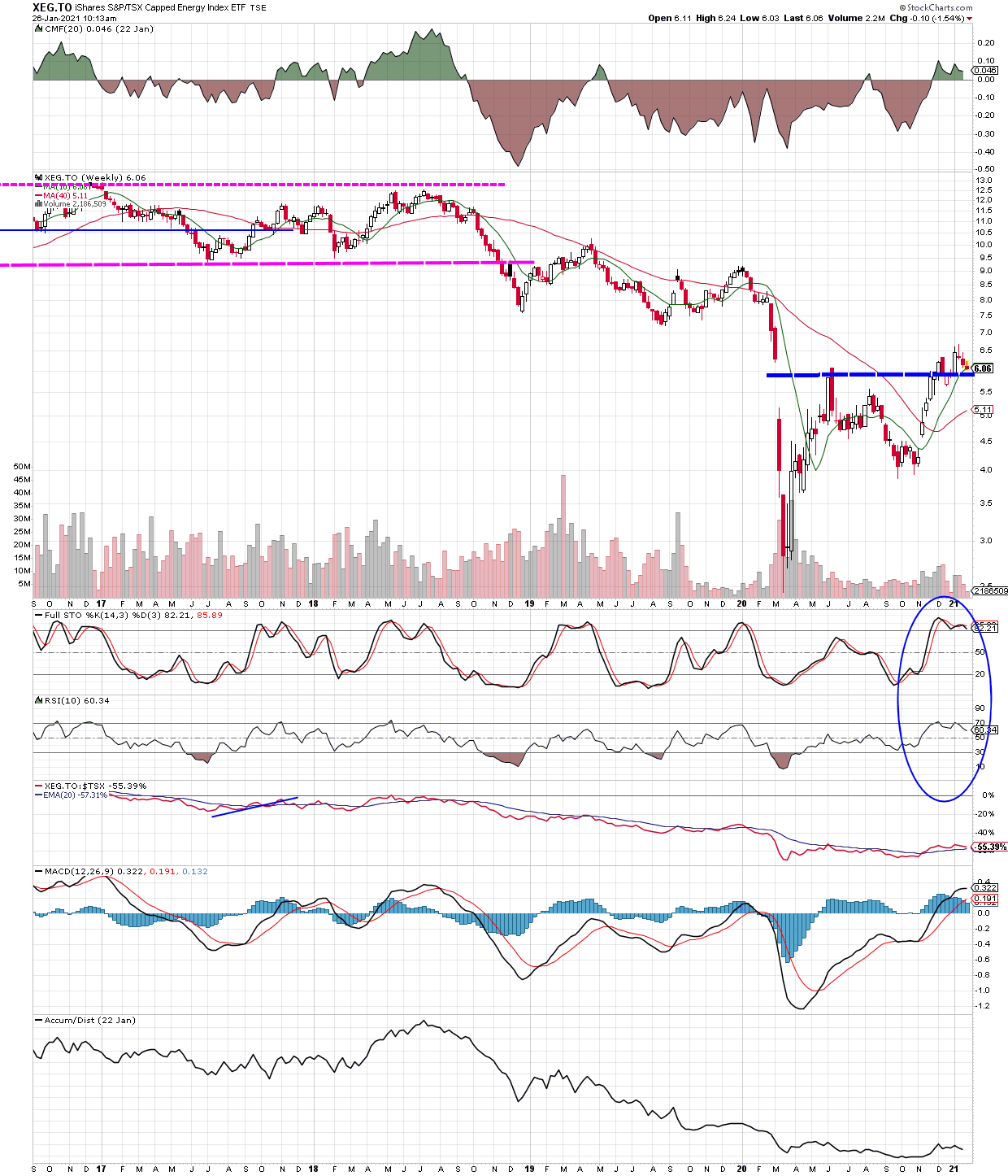 This is XEG, which is the Canadian oil and gas CTF put out by i-Shares. It’s playing with the neckline, which lies somewhere around six and a half or so. It’s going to, if it can stay above this neckline, it’s going to target somewhere around $7.50 to as high as possibly $9 or $10. So that’s a pretty good upside. And the likelihood of it materially breaking the neckline by more than like a little spike like it did back here is, in my view fairly thin given all the factors that we’ve just looked at. So I’m very bullish on oil, maybe not over the seasonal period, it might not happen in the next three months. Like it often does. Maybe it will, maybe it won’t. But I think that if we’re talking about oil producers in the next year, there’s going to be a fair amount of supply-demand changes on the horizon and inflationary changes that will probably make our justification of holding a little bit of oil in one’s portfolio, not a bad strategy. And as you can see, it’s been a bad strategy for a number of years here, but it started to look to me like an opportunity.