Home / Is this the next sector rotational opportunity?

Is this the next sector rotational opportunity?

Is this the next sector rotational opportunity?

Hello there and welcome to the Smart money, Dumb money show. My name is Keith Richards and I’m your host. I’m also the president and chief portfolio manager and chief cook and bottle washer for ValueTrend Wealth Management. I wanted to dive right into the topic and that is how can we benefit from the Dow Jones industrial averages under-performance versus the S&P 500 and the NASDAQ. Now, if anybody follows my blog regularly, you’ll know that I wrote a blog on this topic, but today I’m going to be covering really what specific sectors that we should be watching. And I want to particularly focus on one sector that I see great opportunity, and because there is a real, both technical and seasonal opportunity approaching that will come out of this relative divergence between the Dow Jones, industrial average and the S&P 500. I’m going to share the screen and I’m going to get right into a bit of a PowerPoint that I put together for you. 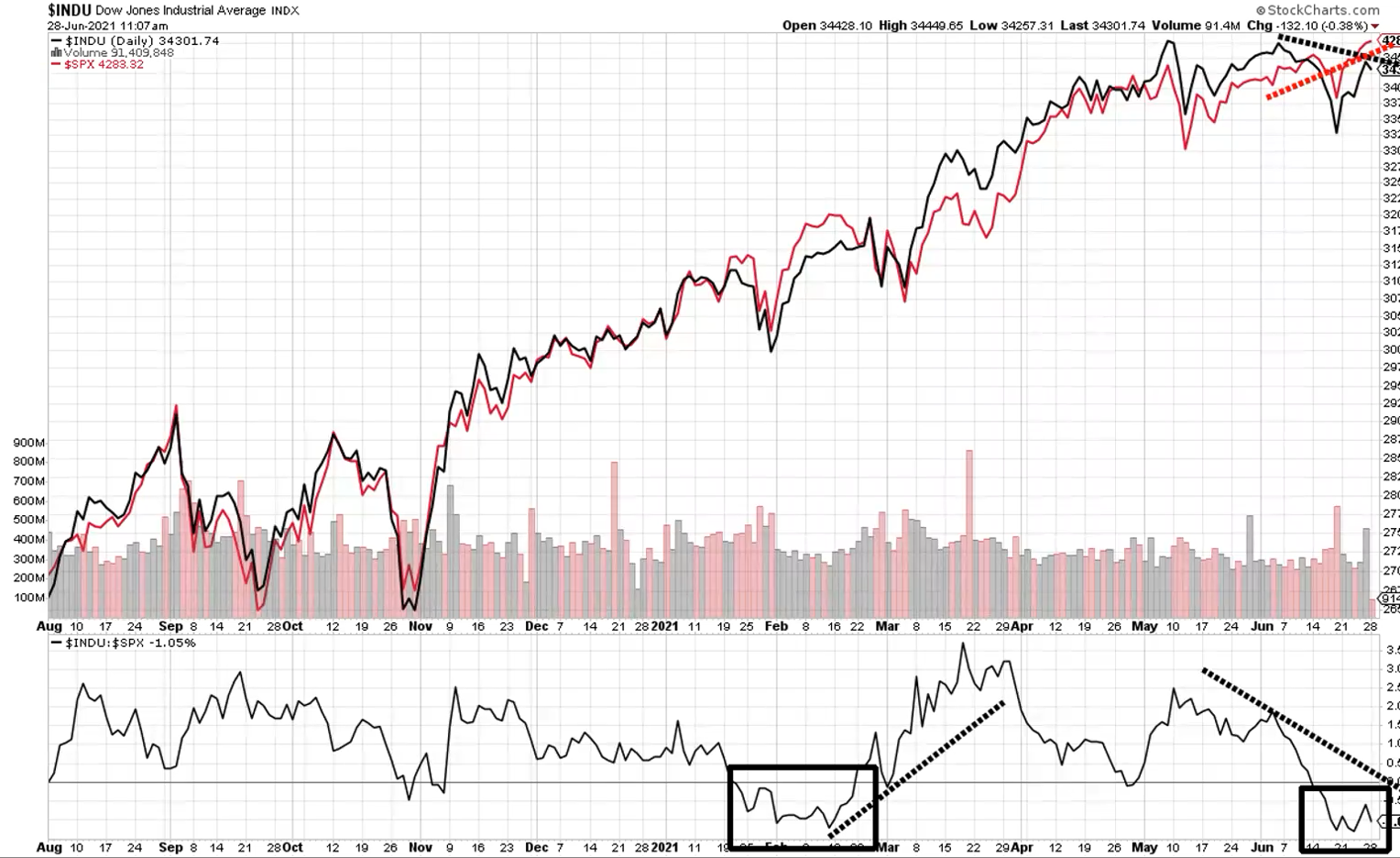 So, let’s call this opportunity summer 2021. And this is the chart that I presented on the blog, the red line being the S&P 500, the black line being the Dow Jones industrial average, you can see the red line S&P by better has been making new highs. This month. The black line has been lower than its high, which was early June. So the Dow is actually lower than it was a couple of three weeks ago, four weeks ago, I guess. And the red line is higher than it was. So that’s a real cause for concern, as far as people who want to see a diversified spread of breadth, we’re getting into that in a little bit, but I want to just kind of focus on the elephant in the room, and that is why the S&P itself 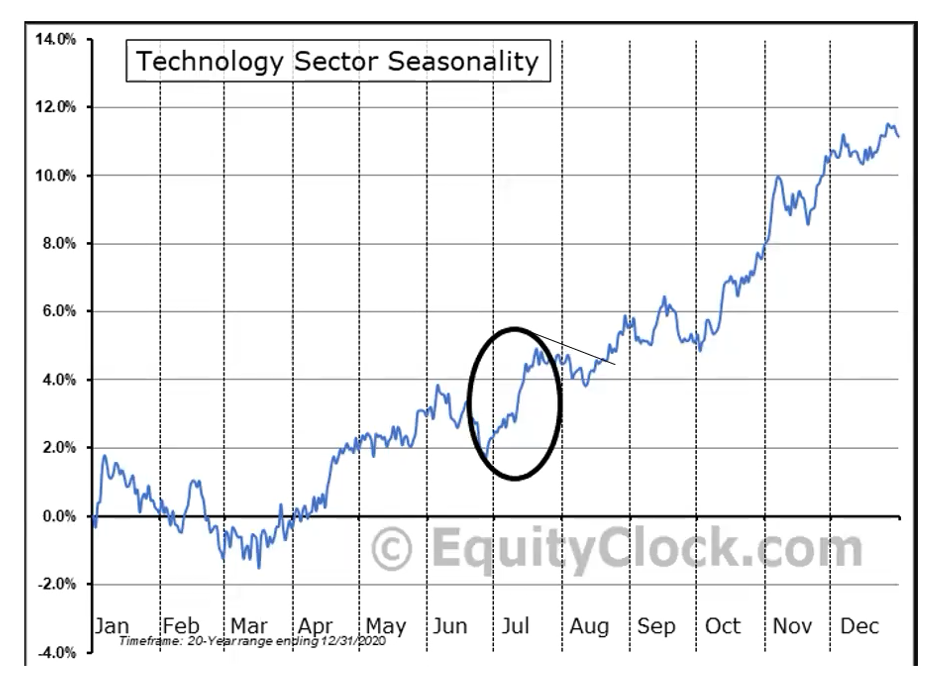 has outperformed by so much? And the reason is some of you probably are aware is because of the outperformance of the technology sector. Now, technology stocks, as we’ll see in a second have done really well over the past month, month and a half. This is not an unusual phenomenon, as you can see on equity clocks, seasonal chart that typically between the last week of June and the third week of July, there in abouts, we tend to get some outperformance by the sector. So we were just entering into that period that technology stocks could do well for a short period of time. So with that in mind, knowing that the S&P 500 is 28% technology stocks talk about an overweight sector, 28% of that index is in one sector kind of goofy. So what you’ll notice on this seasonal chart is that after the out-performance into around the second or so week of July, that technology peels back a bit, and that would be right into about the middle of August.

So there’s kind of this short period of massive out-performance, and then a period of under-performance. So let’s take a look at the technology chart. XLK is the ETF that represents technology. And you can see right on schedule sometime around mid may in this case, technology started moving in the real out-performance, the real arc, as you can see, occurred in the seasonal period from the very beginning of June, till now in that if tendency continues, then we should see technology stocks continue to do well into the middle of July. So now let’s look at the biggest sector in the Dow Jones, industrial average, what is it? Well, it’s the financial sector, and here’s something interesting. Let’s look at the equity clock, seasonal chart again, but for the financial sector. And you’ll notice that during the month of June, right, actually from around the middle of May or so, financials tend to underperform on a relative basis.

They tend to lose about 2% or so, even, even more than that, close to close to three, the way you measure an equity clock chart, by the way it is you take that level, which is almost a positive one, and you go to the bottom and that would be almost negative two. So you’re almost talking 3% on a relative basis versus the S&P prime hunters. So they should underperform by two and a half to 3% during this period. And that’s kind of what it’s done. Then we’ll look at the chart in a second, but what’s really interesting is at that very same time, right into about the middle of July while the financials are not doing so great, the, the technology sector as we just looked, was going up on a relative basis, but come the middle of July and on into August when the technology sector is, we just looked on the seasonal chart, tends to get weak.

We see some strength returned to the financials. So let’s take a look right on schedule beginning of June financials. And this is the banks by the way. So this is the bigger sector financials consist of the insurance companies, the banks, and I believe some of the money management tech firms, but largely the banks and insurance companies, but the banks are the big component and you can see they’ve gone down okay. Right on schedule with the seasonal pattern. So if we go back to our original chart of the Dow Jones, industrial average, being the black line and the S&P 500 being the red line, we should expect that this divergence in performance will change after the second half of July. So into the second half of July and well into August, we should see some changing of the guard if the seasonals tend to work this year.

And I think they will, because the seasonals have worked very well for the two sectors we just discussed as well as a number of other sectors, I should bring up. And at the bottom of this chart, I want to bring your attention to this comparative relative performance chart. This is comparing the S&P the two, the industrials, where it’s industrial divided by the S&P therefore, if the industrials are underperforming, then this line goes down. If there are performing, this line goes up. And what you’ll notice is of course the industrials have been underperforming. So the line goes down and you’ll notice that the last time this happened, which is happening right now, you can see it’s below the zero line, meaning it’s under-performing. The last time this happened, it lasted for a while, a couple months, and then boom, the industrials vastly are performed the S&P 500 one other time.

This happened not showing this chart was middle of 2020, where the S&P was vastly out-performing the Dow Jones, industrial average. Guess why, you already know the answer was technology. Everybody knows the technology stocks, the fangs whatnot, the stay inside stocks were doing really well in the first half of 2020, right into about September. Okay. But if you were to look at this in chart into September, they reversed and there was this big spike up in the financials and they and the commodities and the industrials and all that sort of stuff, the type of stuff that actually the Dow is heavily weighted in through the winter. So my belief is that we’re going to get a repeat of this story based on seasonals, based on historic patterns of under-performance versus out-performance and based on the charts. So I do hope that maybe gives you some ideas on how you can trade over the coming months.

My 2 cents worth the way we’re looking at it is that you will see some, out-performance by the stocks, as well as the three other heavily weighted stocks like healthcare on the S&P 500 that may continue for another two, three weeks, you know, but I don’t think it’s a permanent situation. And I think the tides are going to turn again for commodities, for financials, materials, things like that. And even, even boring old staples, which have also underperformed somewhat lately. So thanks for watching. I hope this helps with your trading plans for the summer and into the fall. You have a good day, and if you have any questions about your own portfolio, please reach out to us at ValueTrend. We’re here to help.