Home / Is the Stock Market Overbought?

Is the Stock Market Overbought?

Interestingly, I posted my first blog on the subject of markets being overbought on Monday. I wrote the blog on Sunday of this week. And it appears so far that my anticipated movement on the markets was correct. Let’s take a look at the reasons why I felt things are ready for a correction. I want to focus specifically on the NASDAQ. But this is the blog and I noted it was the NASDAQ has the greatest risk for a correction. But let’s go instead to the market, starting with the S&P 500, which is the more widely followed index out there. 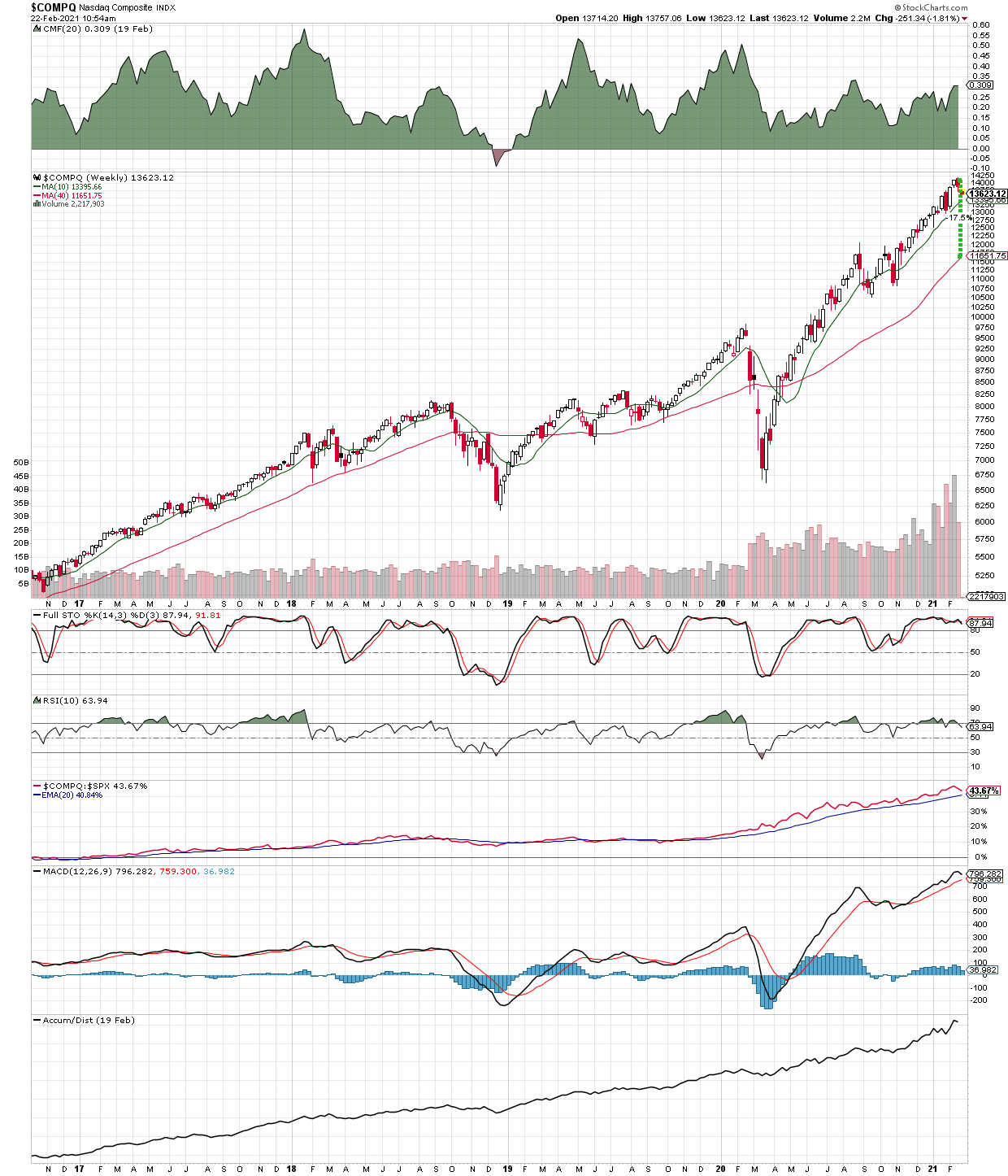 So, one of the keys that I look at when we’re looking at an overbought or oversold market situation is how far above or below the market is over its 200-day moving average. My rule of thumb is anything over 10% above or below its 200-day moving average, we should become concerned. If it’s 10% or more below its moving average as it was in late 2018. During that correction, I think it was about a 25% correction we saw, I think the market was down about 15%. At that time below its 200-day, that usually means it’s excessive in the market will turnaround. So, use this 10% rule, you can see just before the COVID crashed, and nobody knew the COVID crash was coming, but the market was overbought, it was setting up for something we just didn’t know what. Once again, more than 10% over its moving average, boom, we got a correction. Here we are again. 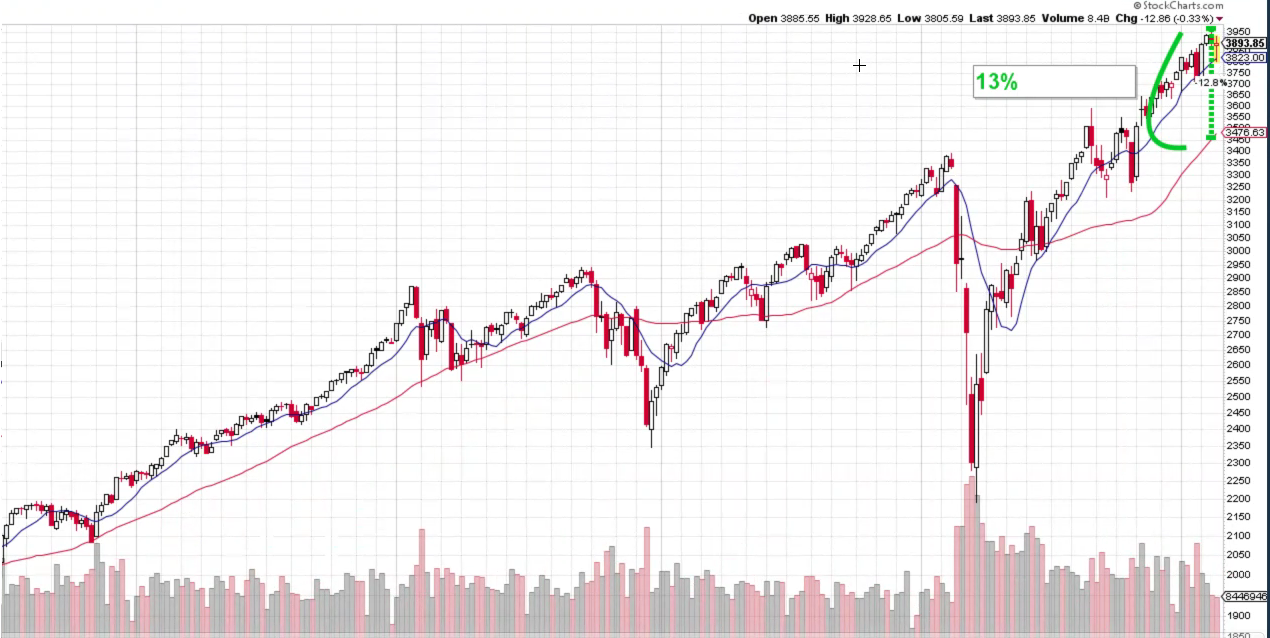 Now remember, most corrections are just that. They’re not trend changes they are corrective actions. And that’s what we have now. We have an S&P 500 level that’s about 13% over its 200-day moving average. Is that the sign of a crash? No, it’s probably closer to the sign of a correction that is pending. And sure enough, since I wrote the blog, this candle here you can see it is starting to move down the S&P touched its 50-day moving average this week. 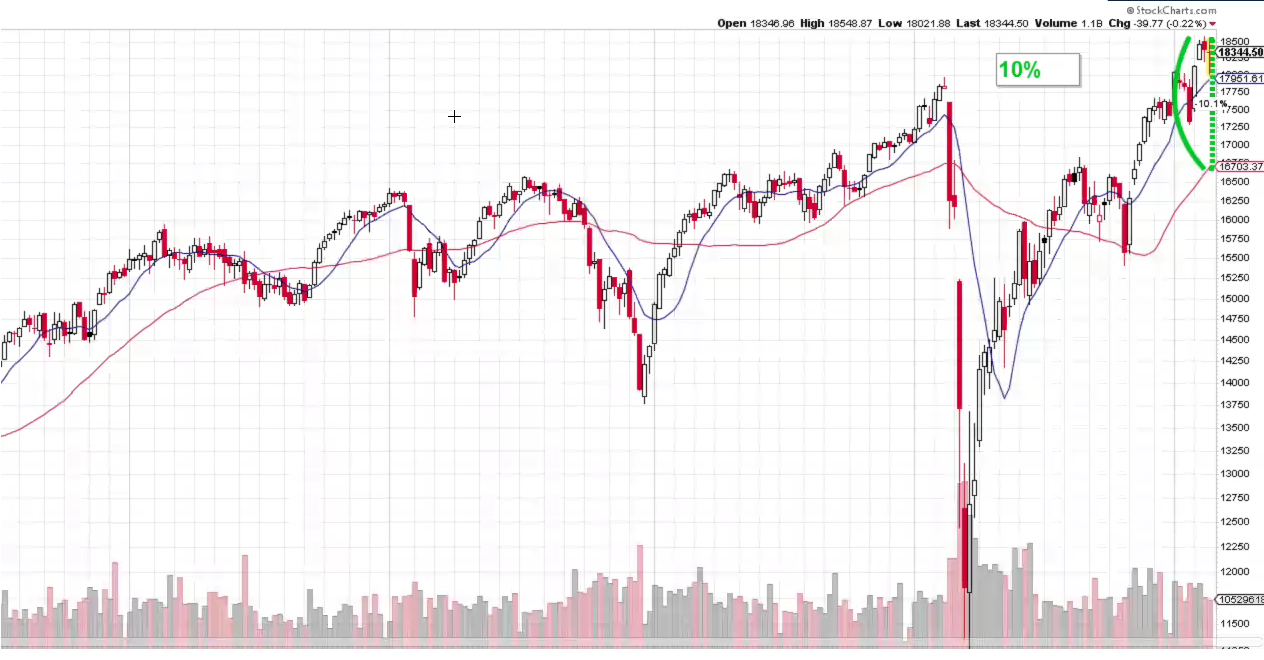 Now, let’s compare that to the TSX. The TSX is the cheapest of the North American indexes right now. It’s only about 10% over its 200-day moving average. And I have been as you know if anybody follows my work, over the past 10 months or so I’ve been pounding the table talking about energy and mining and the commodities like agriculture. I also talked about value. There’s a lot more value, so to speak in the TSX index, because of its concentration in energy and mining. For example, it’s about 25% based between energy and materials. Compare that to the S&P 500 which is only about 10% in those two areas. I’ve seen a lot more value in the TSX because of my favourite position in the reflation trades.

For, anybody who followed my suggestions back in the summer of last year has reaped plenty of rewards, we have outperformed the market by being in these sectors. And I hope you have to. The TSX we still like we like it more than the US markets. So, this is the NASDAQ. As you can see the NASDAQ which is a growth index, there’s the peak, it’s it has declined quite a bit more than the rest of the other indexes we were just looking at from its peak to its 200-day moving average, measured on this line here. It was about 17 and a half percent above its 200-day moving average. That’s well in excess of my 10% rule. That’s the reason why I feel NASDAQ has the most to lose. Reasons behind that fundamentally could be that if inflation is coming, that means rates might rise. If rates rise, then growth stocks tend to do a little bit worse because they’re not able to borrow and expand as quickly in a higher interest rate environment.

The market moves way ahead of these things. I don’t care what the logics are, I only care if the market is overbought or oversold, and in a trend or not. It’s in a trend. That’s a good thing. It’s overbought, that’s a bad thing. We have a high likelihood of a pullback on the S&P 500 on the NASDAQ, possibly a small one on the TSX, as well, but I favour the TSX.

On our other blog, I called it “Bitcoin and Dirty Harry”, because to me, Bitcoin has been in the news a lot lately, and it’s had this big parabolic move. I noted that, based on how far it has moved, I feel that it is probably a bit like, what Dirty Harry would say, to buy bitcoin right now, to think there’s a greater upside, you know, just bring you to the chart that I posted, is probably a bit of a gamble, you have to be as Dirty Harry said, “Do you feel lucky?”

I don’t know, if I feel so lucky on Bitcoin, it formed a nice triangle, that’s a very bullish thing, the way we measure triangles, we say that past volatility, so this is a period of volatility, volatility can be up or down, and you can see the volatility was there. But past volatility repeats itself. When a stock breaks out, or in this case, currency breaks out, it will often repeat the old volatility. So, we had about an 88% swing from the bottom of the triangle to the top of the triangle, you know, way back in 2000, late ’17 early ’18 and it stands to reason that a breakout would imply another roughly 88% or so percent upside, well, the problem is, is that we’ve already seen 76% of that upside. In other words, we’ve got maybe 10%, 11% 12% something like that left in the move, if that. And when we talked about how far above the index is, or the Bitcoin index is above the 200-day moving average, it’s something like 500% over its 200-day moving average.

Do I need to say anything? This is probably an overbought sector now, I want to caution you that it’s different than markets because when you get one stock or one currency or one commodity or whatever it is that people are focused on, they can become very excessively speculative and it doesn’t matter to them, to the traders, how far above or below a moving average is, they just, they’re on the train and more and more people are jumping on the train. At some point, it comes down hard and you can see that happens in Bitcoin here. But it could last a while. So just be aware that you know, parabolic moves like this here, similar to this here. When you build from the low point here, very similar look, it eventually does pull back but it could move another 10% so I for one am not buying Bitcoin. 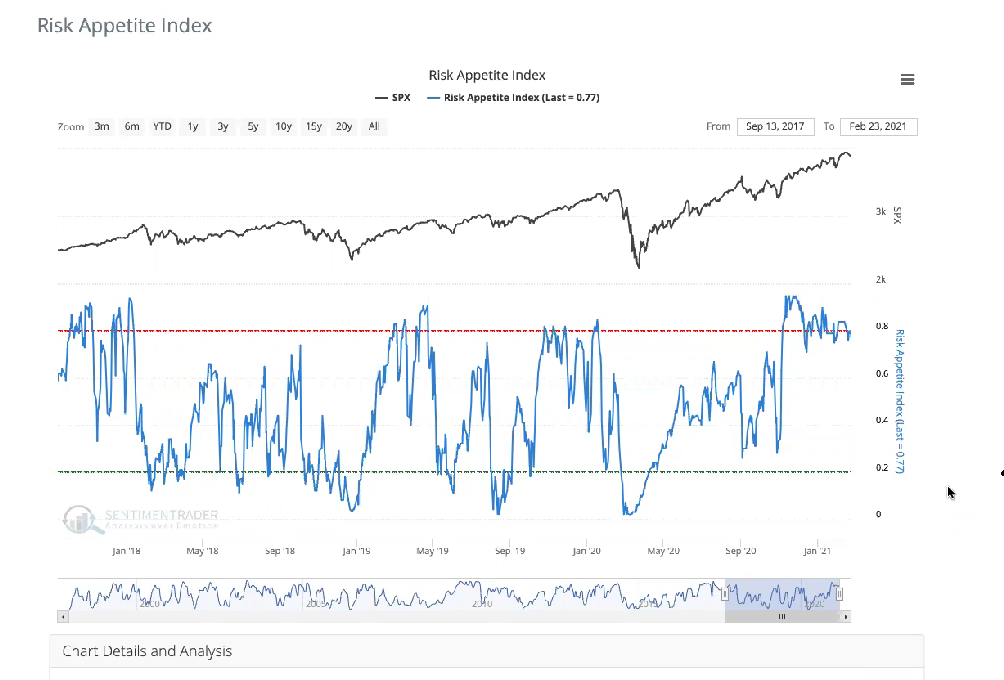 The last thing I wanted to show you is Sentimen Trader. This is a subscription-based service. This is showing the risk appetite by market players and general players, so it shows the spread between defensive stocks and growth stocks. So how well are utilities and staples and whatnot doing versus say technology and biotech, okay, the NASDAQ.

Sentimen measures currency spreads, rate spreads, stuff like that. These are all risk appetite measurements, and there’s a number of different companies out there like Citigroup, UBS, and Westpac they put together these risk appetite readings. Sentimen Trader does us all a favour if you’re a subscriber, and they put the three major ones, the three I just mentioned, risk appetite indicators together all into one. And you can see that it’s a pretty good indicator. It’s a heads up. It’s not a precise timing tool. But you can see as markets go up, risk appetite increases in there, when it goes above Sentimen Traders little red line here, that tends to indicate you’re starting to get to the point where you might see a correction. Okay? Same thing when it when the markets fall, you’ll notice risk appetite falls a lot.

And here again, you’ve got below the green line. It’s a kind of a bullish sign. It’s not a bad indicator you can see it, you know, it moved quite a bit up in 2019 and resulted in a small correction leading into the COVID crash it was he was on the red line. And sure enough, we were set up. It wasn’t just the moving average, it was just talking about here at the bottom of the COVID correction, risk appetite fell a lot. And that was a good signal.

Well, we’ve been hanging around that over risky, everybody loves growth stocks and thinks the future is great sort of area. Now, remember that can last a while. It did here. So, you know, don’t just because they’re above the red line doesn’t mean instantly you’re going to see a correction. But everything I am looking at between the Sentimen indicators like this, the Smart Money Dumb Money that I don’t have on the screen right now. And the percentage above the 200-day moving average, we’re starting to see some signs that the markets are overbought. The trend is in good shape, we’re in a bull market, interest rates are low, Biden is stimulating it’s all good for the market.

Don’t read this, to suggest that I feel the market crash is coming, yet. But I do think that we’re setting up for some sort of correction that may be happening right now. The NASDAQ certainly this week has been pulling back, I give myself a pat on the back for calling that one. But that may not carry on much longer. Maybe the market will start carrying on its merry way because it is the seasonal time of the year that the markets tend to do okay. My thoughts are if we don’t get a correction now, maybe 10% or so we’ll get it in the spring or summer because it’s overdue.

Thanks for watching. Any questions shoot us an email. Be sure to subscribe to the YouTube channel. Be sure to subscribe to the blog, you can do that now. And if you want even more insight, subscribe to the newsletter all on our valuetrend.ca website. There are buttons everywhere you can subscribe to our stuff. We don’t solicit you. We simply provide you with information. And we believe that by providing you with information on how we look at things, that if you are looking for an advisor, if you’re looking for a portfolio management firm that has a very rotational point of view and a way of doing things that is not buy and hold, then you might consider us. We always hope that you’ll do that if you’re in the market for having your money managed by a conservative investment firm.