Home / Is it time to buy Canadian REITs?

Is it time to buy Canadian REITs?

Hello, and welcome once again to the Smart Money Dumb Money show and I’m your host, Keith Richards. I’m president and chief portfolio manager at ValueTrend Wealth Management. And I’ve been in this game for 32 years. I wanted to talk today about some of the factors that might influence us to take a look at the REIT section in Canada. REIT of course stands for real estate investment trust, and they’re generally bought by investors seeking higher yield. Now, unlike dividends on stocks, you don’t get any tax credits for the high returns. Nevertheless, they are pretty good for cash flow and a lot of retired people buy them, but they’re not without their volatility. And they’re not without they’re seasonal periods and sector rotational periods, where there are better times and worse times to own them. So I want to take a look at the REITs because I just finished writing a blog today.

Now you won’t be watching this video until probably a number of days after this blog that I wrote today is published, but the blog covered my latest reading, which is the April reading of my Bear-o-meter. And the Bear-o-meter basically showed us that risk is becoming elevated on the stock market. So I wanted to look at some alternative sectors that have maybe not been caught up in the very strong, over bought and dangerous conditions that the Bear-o-meter is suggesting the market has been displaying. So let’s take a look at the REITs and see if that sector may be one of the areas we should be looking at. So I’m going to share the screen and I have a little PowerPoint here. And the reason I had to use a PowerPoint is because I needed to show you both the stock chart for REITs and then I also wanted to show you the seasonality.

So we want to answer the question are REITs a safe hiding place in a risky market. So let’s see if they are or may be, I should say. So this is the chart of the iShares Canadian REIT index. Now it is a capital weighted index. Bank of Montreal has an equal weighted REIT index. And you can look at that as well. They look pretty similar. Although the Bank of Montreal equal weight index is looking a little bit less like a consolidation and a little bit more like it’s an uptrend. Nevertheless, there’s not that much of a difference and we’re going use this because it is the official index. So what I want to note here is that you do have a higher high here, but generally speaking, it’s looking very much like a, either a gentle uptrend or a consolidation. And it appears that we see the XRE units have come down to the bottom of that trend line or consolidation period, whatever you wish to call it. You’ll notice too, that the market is pulled back to the red line which is the 40 week or 200 day moving average.

On the short term, you’ll notice that stochastics is rolling over so that might indicate that there maybe is a little bit more volatility to come on the sector and, of course, the RSI has pulled back as well. But on the positive side, as far as momentum indicators go, we may be seeing a move up on MACD. Now, recently it’s a little curved down, so we’ll have to keep an eye on it. But after a pretty substantial decline on the MACD when it was diverging after the uptrend, the divergence of the MACD was telling us that something was changing and it did. It changed from an uptrend to a sideways trend. Now, MACD maybe crossing over to the upside. It’s very early yet, but what I’m seeing on this chart is a potential setup for upside. And I would like to see a bounce up off of the 200 day moving average. 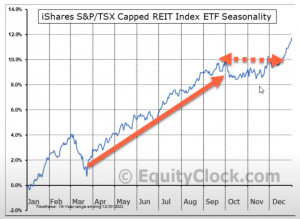 And I would like to see this MACD continue to move up. So let’s move to the next slide, which is the seasonalities of the same ETF we were just looking at. And you’ll see that we just came off of a poor seasonal period, which was March, for REITs. And sure enough, that’s what we saw on the chart, didn’t we? We saw that it had pulled back to a trend line or a bottom of a support level. So this kind of makes sense. You’ll also note that we are just entering into a very strong seasonal period for REITs between April and September. So perhaps we’re getting into a buying opportunity. After September, the market tends to go very sideways for REITs for a few months. So this may be an opportunity if the charts start to show some movement into the sector, some money flow.

So we go back to this and we are seeing, in fact, this is the accumulation distribution line. You can see that there has in fact been some positive money flow and a little bit of a change as money flow momentum did cross back over the zero line. So let’s oops. So let’s call that a possibility of some positive factors from a money flow point of view. Maybe money is just starting to move into the REIT. Now, a couple things you should probably understand. I did a beta analysis on XRE. You can go to Yahoo and do this yourself. I like using five year beta because it gives us a long enough period of time to look at. And the five year beta is 1.2. So that means the sector itself is actually a little bit more volatile, 20% more volatile to be exact then the market itself. 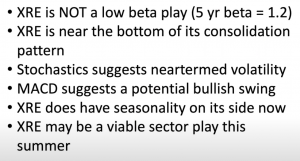 So I’m gonna move my screen over. You can see it’s 1.2, which is 120% movement up or down of the market on average. So it’s not a low beta play. It’s not a low volatility play per se. However, it is near the bottom of its consolidation or up trend pattern. It’s stochastics is suggesting maybe some near term volatility, however, MACD is suggesting a potential bullish swing and we shall see. Not gonna draw any conclusions yet. I do not own any REITs right now in the ValueTrend portfolios. XRE and the REITs in general do have seasonality on their side, coming to the theater near you. In fact, it’s starting right around April that you start to see this sector show some strength. And so in conclusion, it may be a viable sector play this summer, particularly in view of my view on the markets, which is the markets probably have a little bit more downside, or at least volatility potential then what we’ve seen in the past few years this summer. 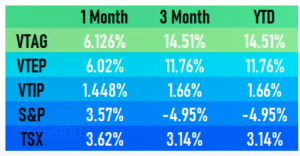 I feel that we may be entering into a higher risk market and that’s all explained on my most recent blog on the Bear-o-meter. So I do encourage you to read that. So that’s food for thought on the REIT sector and I do want to talk about, again, as I mentioned in the last video, you know, why we need an active approach on the market right now. The bull market of the past number of years has led a number of people to believe that all you should do is just buy some indexes and hold them. And, you know, there are legitimate sources that compare most active managers to market indexes. And it’s true, a lot of active managers in fact, something like 80% of active managers don’t perform as well as the index, or at least don’t outperform the index.

However, ValueTrend prints its performance. We actually on our website post our performance. You can go to ValueTrend.ca and you can hit the performance tab and you can see how we’ve done, and we have outperformed the indexes. So we use a, on the website, we use a mixture of the TSX and the S&P 500. And that’s because we are Canadian managers. But I do want to take a look right now at the near term performance, as I did last month, and note how we have done during the recent market pullback. And each one of our strategies has outperformed the market and I’ll explain this. This is just year-to-date because that’s when we’ve seen a lot of the noise and the downside on the market. But I do want to note that you can go to the website and click the performance tab to see much longer data.

So if you think I’m just focusing on the short term you can actually see our long term performance and you’ll notice that it has been impressive as well versus the stock market. So let’s just take a look at the ValueTrend, Aggressive Strategy first, and this strategy by the way is not for everybody. It’s very, like the word explains, aggressive. We take big positions in higher risk stocks. It’s paid off. Our year-to-date and three month is about 14 and a half. This is before fees, but in three months, our fees would be probably about half a percent or so at the most on this. And so you can subtract maybe half percent and you’d be still near 14%. Our equity platform, which charges considerably less than the aggressive platform has made almost 12% before fees. That definitely brings us very close.

Well over 11% on the year after fees and our income platform is made on the year about 1.7 and the fees are very, very low on that platform. So easily one and a half percent versus the S&P 500, which has lost about 5% and the TSX, which has had a positive return because of the commodities, but it’s only really made about 3% versus the very great difference in performance on our equity platforms. So I hope that answers, in a volatile market does active management work? Yes, it does. It doesn’t work for active managers who make the wrong decisions, but it does work for those of us who follow a logical quantitative program like ValueTrend does. And like I mentioned, at the beginning of the show, I’ve been doing this for 32 years. So along my three plus decade journey, I have learned a thing or two about portfolio management.

And I’ve lived through many severe correctionsand bear markets and I’ve learned a couple things about how to trade around those situations. So it’s not just whether active management works against an index. It’s whether the manager you are dealing with actually knows how to trade within a volatile market. So that’s it for today. I hope that helps. And again, we should be watching REITs. We’re not in them yet, but it’s a sector that we should all probably keep an eye on cause it might be a good place to be this summer and time will tell, won’t it? Thanks for watching.