Well, hello and welcome to the Smart Money, Dumb Money Show. And I am your host as usual Keith Richards. I am president and chief portfolio manager of ValueTrend Wealth Management and today, breaking with more than a years of tradition of doing my videos, I am not wearing a bow tie. In fact, I’m at my cottage and I’m doing a fireplace chat. There’s the fireplace right there. So it’s actually a wood-burning stove, but semantics. So today I wanted to give you some real Canadiana when it comes to the stuff I am looking at, as far as the Canadian index and the Canadian dollar. So it’s going to be a short one, but it’s very fitting with the fact that I’m up in Northern Ontario and enjoying some of the good weather that we had in the second week of May of 2022 when I recorded this. So let’s get started, I’m going share the screen. 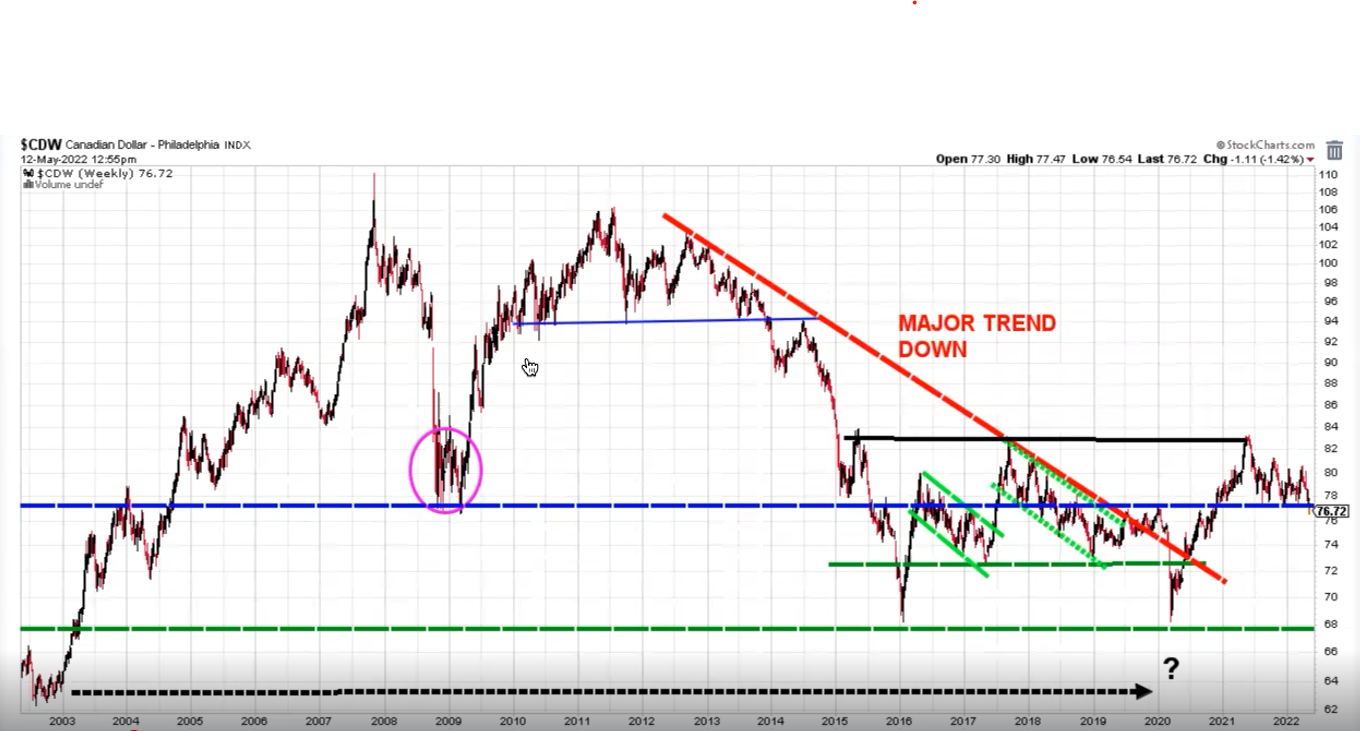 And as I said, we’re going to look at the market and we’re going to look at the dollar. So let’s get started. So we’ll start with the dollar. And it’s interesting. I’m probably going to send a link to this video when I have published it. I’ve spoken with my younger brother who wanted to spend some money in the United States. And this was about a month ago when the dollar was around 80 cents. And he said, should I buy my US dollars now that it was, I think the Canadian dollar was 79 point something at the moment. And I said, yes. And I had various reasons for that prognosis, including some of the notes that I made on a blog called boiling frogs. And if you want to take a look at that blog, you’ll see some of the reasons why I thought that there might be a selloff in the Canadian dollar from that 80 cent level.

And that’s in fact what happened. So I know my brother listened to me and he bought his US dollars right around when the Canadian dollar was 80. So where are we going now? Well, as you’ll notice on this chart and this chart, by the way, if you’ve been following my blog for a long time, I have been posting this chart literally since right after the 2008 crash, I started posting this chart on my blog and it’s been pretty accurate. This blue line here is one of the support resistance levels that I had noted. It’s actually a very long term support level. And you can see that it has multiple times found both points of resistance and recently many bounces off of support. And that lies somewhere around, just under 77, call it 77 cents. So the market for the Canadian dollar likes to move roughly between 77 and the low eighties, let’s call it 83, which is where my black line here is.

And you can see there has been three touches, meaning that it’s a very significant point of resistance if the Canadian dollar gets near 83. So my thoughts right now is that we’re just breaking that point of 77 cents. It’s just below, I think it’s at 76, 72 as I record this. Now one or two days, we don’t panic. Just keep that in mind. I always teach through my technical analysis course and through my blogs and through these videos that you have to wait a few days before you ascertain that a break has happened. So it’s early yet, and there’s a reasonably good chance that 77 or thereabouts will hold, but it is breaking. So you should keep in mind that there’s a potential for the Canadian dollar to go lower. If it does go lower then the next target would be probably closer to 73 cents.

As you can see down here, there’s been a multiple level of support touch points down there. So where are we going to go? Well, at the very best, I think we’ll hold at 77 cents or there and abouts. Again, it’s drawn with a crayon, not with a fine point pen, as I like to say. And if this 77 cent area does not hold, then you’re looking at probably somewhere closer to 73. You’ll know that probably within a week or two. So let’s keep an eye, but it’s possibly okay news that it’s holding at 77 or possibly bad that it’s in the beginnings of a bit of a breakdown. So we shall see though. Let’s not draw any conclusions. So the next thing I want to do is scroll down to the commodity index, the CRB commodity index. Now, why am I talking about the commodity index? 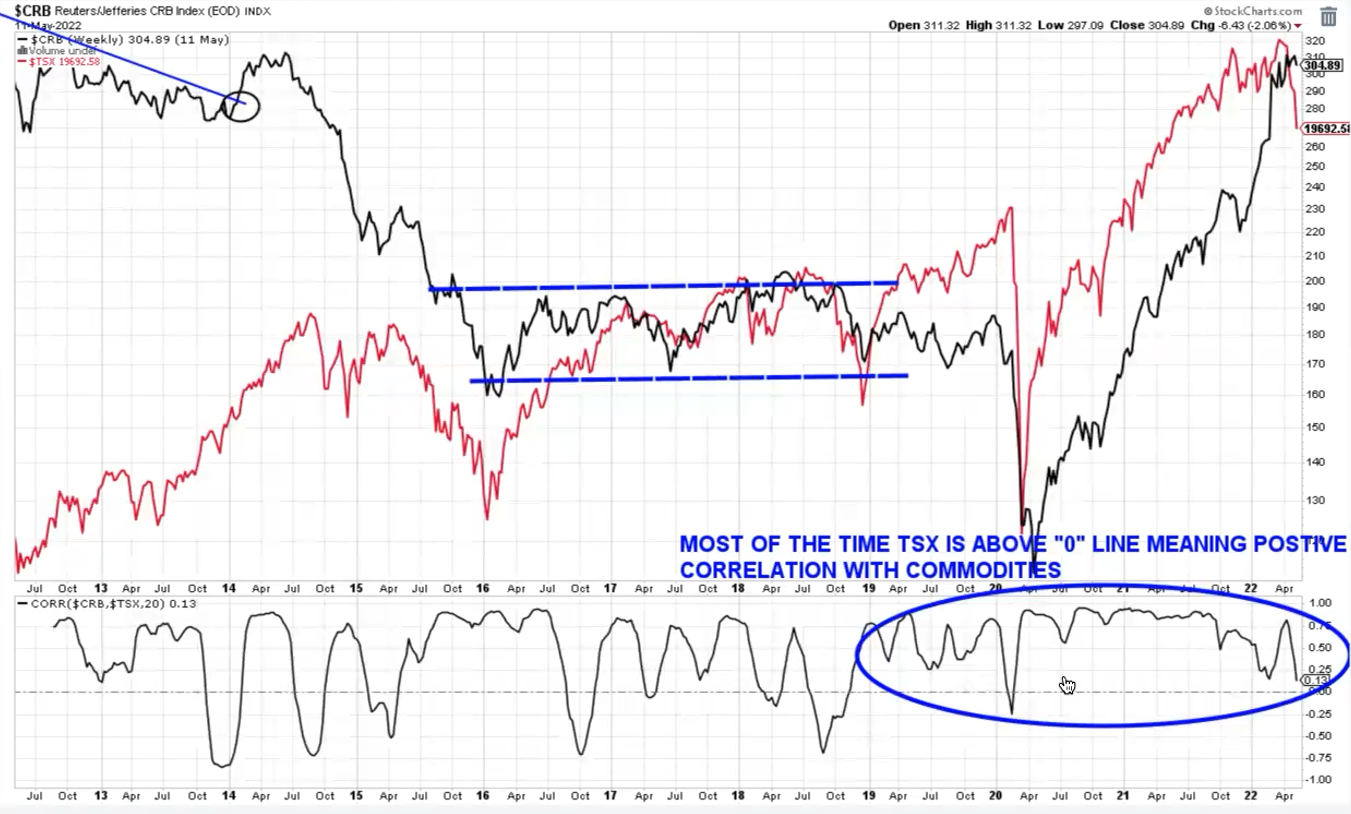 I’m going to move my little picture guy over to the left hand side. And so I just want you to see the right hand side of the chart. So the reason I am talking about the CRB commodity index is that I have shown this chart on my blog before. And you’ll notice that the two lines, the TSX which is the red line and the commodity, CRB commodity index, which is the black line are pretty often in sync. Sometimes they diverge like here. But this line down here, this is called a correlation study. And basically it tells us how much in sync these two charts are. Now, the zero line is the positive point. So if it’s above the zero line, it means there is some form of positive correlation between commodities and the TSX. You can see at the top of this would be one, at the bottom would be negative one.

If it is positive one, it means the two are absolutely moving in lockstep. If it’s negative one, it means they’re absolutely moving opposite to each other. In fact, if you looked at an inverse ETF, a single inverse ETF, or some sort of a bearish strategy, you’ll find that they tend to work absolutely negatively correlated to the market. So commodities actually tend to work pretty correlated most of the time to the TSX. And that’s what I’m trying to illustrate here is, particularly since 2019, when, and I know I’ve repeated myself at nausea now, but back in 2020, we were recommending on our blogs and we took action ourselves to buy commodities and you can see how commodities have done. And the TSX has followed. Now what’s happening now is that they do tend to, most of the time, if you notice that even going way back in 2014, most of the time with the odd dip below the zero line, but most of the space is up here above the zero line, meaning that it’s a pretty reliable fact that most of the time the TSX is going to do about as well as commodities are doing on a relative basis.

So here we have a pull back on the TSX, which is the red line, but we only have a very, very small bit of consolidation. In fact, the trend is still up on commodities. Now, commodities are heavily influenced by oil and the metals, hard goods and then it does include some of the softs like cotton and agriculture, but pretty much the basket of commodities with a few exception have done well. Aluminum has been selling off pretty hard lately, but most of the commodities, particularly oil, gas, that kind of thing are still doing quite well. Gold is doing well lately. All things considered. So you would think that the TSX would follow, but it is not. So again, I want you to read that boiling frogs blog that I did, and it kind of gives some explanation as to why that may be, but my thoughts are that this won’t continue.

And I do think that the TSX will turn around and start to move up as commodities move up. And this is why, here’s something shocking, I’m a bit of a stickler. Craig and I tend to prefer to buy individual stocks or sectors like sector ETFs. We don’t usually buy broad index ETFs. Why? Because you’re not getting any alpha that way. You’ve just got market beta. You’re doing whatever the market’s doing. And that’s okay as an occasional trading tactic to move into a market ETF and then out, an index ETF. But generally speaking, we prefer to rotate asset classes and sectors. And you’ve seen us do that. And that’s why we’ve been out performing the market even when the market’s been falling lately. So I do think that owning some TSX itself, isn’t such a bad strategy, even with the environment we’re in right now.

And to my point, our only index ETF that we own at ValueTrend is the TSX index ETF. Now there’s, there’s a few of them out there so I don’t need to tell you which one I own, but it’s just a play on the TSX because of our belief in the Canadian commodities or I should say the international commodity markets. The downside to owning the TSX is it’s got the banks in there and the banks are very definitely influenced by what is happening in the economy and that’s looking a little bit shaky right now, but ultimately the commodity space is still the biggest or one of the more substantial influences on the TSX. So we do think that ultimately, if you have to own an index, the TSX is the way to go. So that’s it for today. I just wanted to give you a couple of ideas on where the TSX might be going, which I think it’s a little oversold and I think it could pop to catch up to the commodity correlation that it normally has.

And I also wanted to suggest that we keep an eye on the dollar, particularly those of us who do go down to the United States and spend currency down there. If you’re doing any conversions or buying US stocks, those kind of things, we should be aware of the currency fluctuations. So we’re at a tipping point with the Canadian dollar versus the US dollar. There has been a flight into the US dollar because of fear on the markets with the Ukraine war and everything else. That, as explained in a blog I wrote today, talking about a potential for a near termed trading bounce. And you’ll see that blog by the time this is published, this particular video is published. I’m suggesting that maybe you’ll see a bounce on the markets, and that could put some more support back into the Canadian dollar because the US dollar has been used as a safe haven of late.

And it typically is. So that’s about it. Let’s keep our eyes on the target and enjoy the trading activity that I am sure this market is going to present. Keep up on watching these videos, keep up on reading my blogs. And if you have not already, I do strongly suggest you take the online technical analysis course. We’ve had something like 250 people register for the course. So I assume there’s a reasonable number of you who watch this video and read my blogs that have in fact registered for the course. But we have over 3,500 regular readers of the blog. So I’m, I’m hoping more of you will buy it, not as a profit center. I didn’t really make much on the course. It’s a hundred bucks, but I’m trying to instill my knowledge into your cranial vaults so that you will understand how my way of thinking and how your way of thinking could evolve to as far as market analysis. So thanks for watching and we will catch you next week. 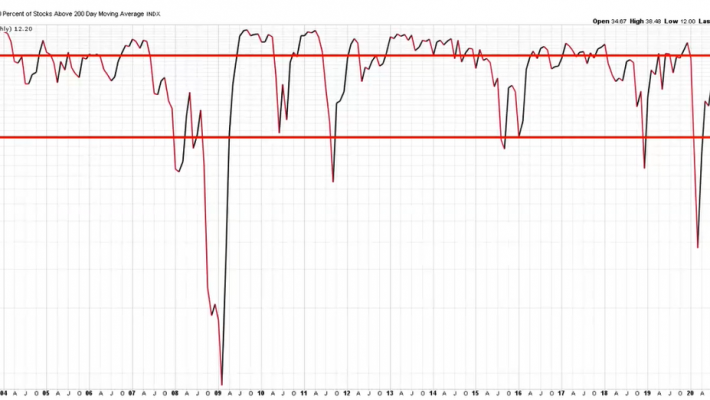 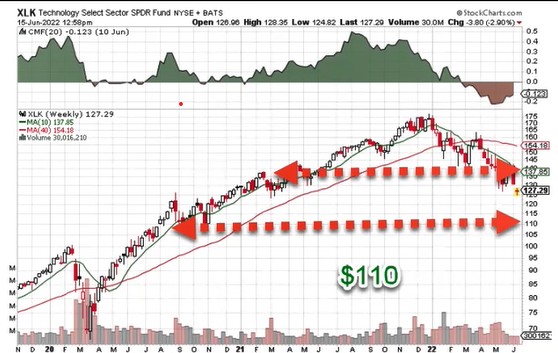 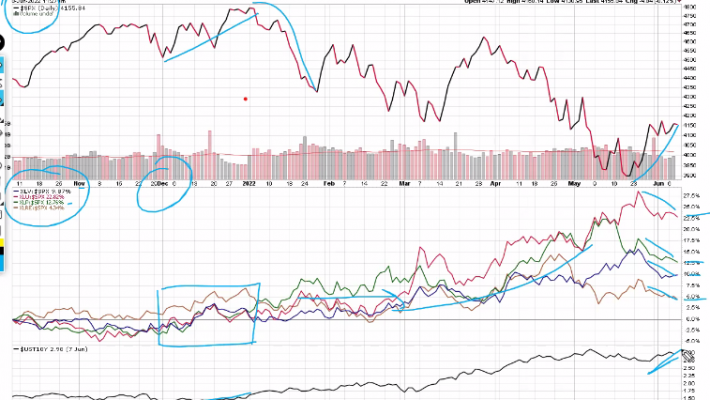 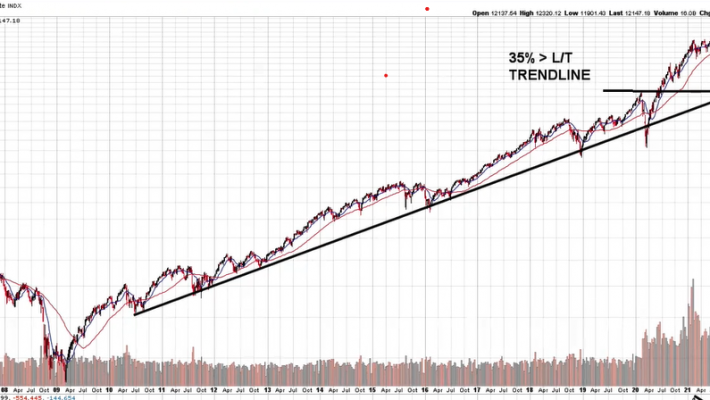 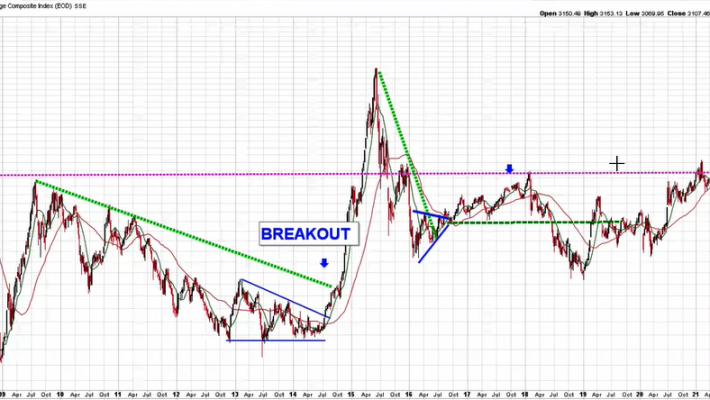 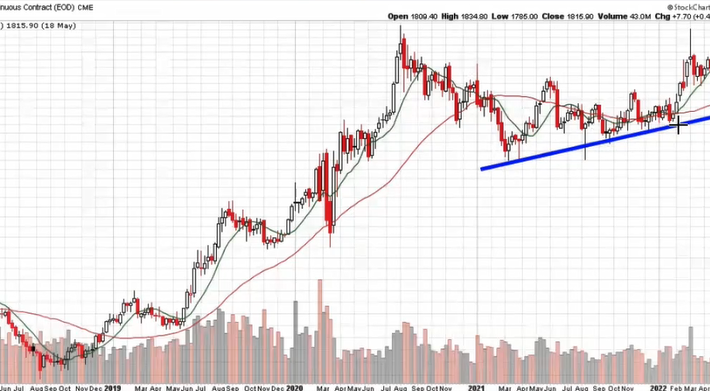