Home / How Low Can it Go

How Low Can it Go

In this video, I’m going to focus strictly on the S&P 500. And the question that seems to be on everybody’s mind, which is how low can it go. I’ve received a number of inquiries on my blog. I’ve had a number of conversations with clients and just people that I know in my life who know what business I’m in. And everybody’s been asking the same question. How low do you think this correction will go? Now, just to back you up in time a little bit on June 2nd, I wrote a bear-o-meter blog. I reported on the findings of my bear-o-meter, compilation, and anybody that’s been following my blog for a number of years will know that once a month, I report on the blog as to how the bear-o-meter is looking at the risk-reward, trade-off on the major us stock exchanges.

At any given point, I tried to do this at the beginning of every month. And on June 2nd, the reading of the bear-o-meter was two out of eight. Now on the bear-o-meter, the lower the score, the more risk we’re looking at on the market. So basically I had not seen such a high-risk recording of the bear-o-meter since last August. And I noted on the blog that last August when it reported two out of eight, the stock market fell more than 10% and did not recover for three full months. So I noted on June 2nd of this year that given the same reading and the same overbought level of the market that I felt we might see something perhaps similar history tends to mirror a little bit, but not exactly repeat itself.

So I’m not suggesting that we’ll have a three-month pull-back and sideways period. I do think what will happen is we have some sort of consolidation similar to what happened last year. So the question then is, well, how long will it go? And what are the projections for the market going on its’ merry way and back into a bull market. And I really do want to emphasize that the market is enabled right now. This correction , however deep it decides to go, is just part of a normal, healthy market. I’m going to share the screen and I’m going to just take a quick look at the S&P 500. This is a chart that I have put up on my blog in the past with these annotations. And back in April, as you can see on the right-hand side of the chart, I noted that the S&P 500 was 15% over its 200-days moving average. 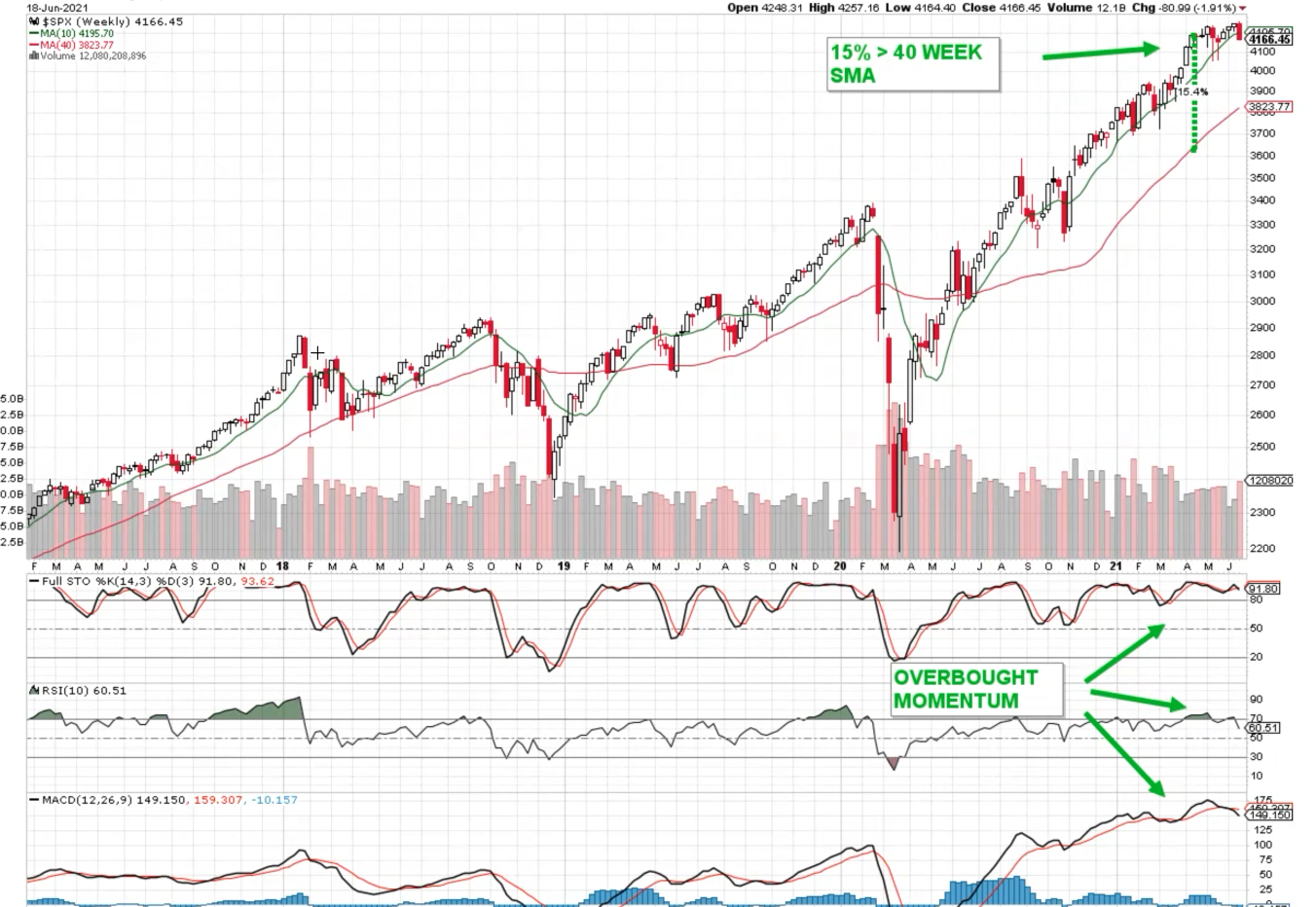 The 200-day moving average is this red line here. And you can see, I noted it was about 50% back in April over its moving average. Generally speaking, when the moving average is 10% or more below the level of the market, you tend to get an overbought market that is waiting to correct. And you’ll notice that after I read that reading the market did make a new high, but just barely. And it’s really been fairly choppy sideways since. So at the same time, I was noting back in April that the moving averages as I just noted, and the momentum indicators were a little overbought. You can see RSI was over 70 zones to caustics with low high, and even MacD was fairly high compared to its historic levels. Now we’re seeing MacD starting to roll over a bit DRSI is starting to trend down, which is interesting, cause that was a negative divergence versus the rising S&P 500.

And you see the same thing happened with stochastics. So let’s get back to the original question. How low can this market go? And my suggestion is that if you were to look at history and we have a good five years worth of history here, every time the market, for example, back in 2018, here gets to that point of about 15% over its 200-day moving average, you will find that it tends to pull back right around the 200 moving average. So back in 18, we saw a level of about 3000 on the S&P and the moving average was around 2,700. And that’s where it ended up same thing on the downside, by the way, when you get a massive correction, like at the end of 18, which was more than 15% below, the moving average had pulled right back up to that level.

So what I am seeing is over and over and over again, we tend to see pullbacks so long as they’re not major bears. Like we got at the end of 18 and March of 20 during the COVID crash. Most of the time we get pretty close to the moving average, sometimes a little short as did here. That was about 15% of the moving average. And it didn’t quite get down to the moving average. But my suggestion to people has been that we should expect that the S&P 500 will land somewhere close to the 200-day moving average. And that level is somewhere near 3,800 right now. So if you want me to pick a target and it’s pretty hard to be precise with this game, but if we want to pick a target for this current correction, I would suggest that the S&P if it determines that it’s going to continue correcting as it has been may land somewhere in here 3800, 3900.

Now, the other thing that can happen to the market is that it could trade sideways and work out that excess. And that sometimes happens. And maybe that is what is happening right now. If the market trades sideways, the S&P 500 is a moving average, the 200-day moving average, we’ll eventually catch up with this sideways trading market. And that is another alternative where the market didn’t actually fall too much, but just by the lower average rate of return on price, you get a catch up to that. Moving average either way. What I would anticipate is that by the end of the summer, we will see the S&P 500 return to a very close level to the 200-days moving average. So that’s my target, and that’s how low I think it can get. Hopefully that answers some questions of some of you who are wondering where this market will go over the next little while. It’s just a matter of watching history and noting what’s happened in the past. And that’s typically been what has happened during any bull market correction, which I believe this is thank you very much for watching, and we’ll catch you again next week.