Home / Have we seen the Bear Market Bottom?

Have we seen the Bear Market Bottom?

Hello there and welcome once again to the Smart Money, Dumb Money Show. I am your host as always Keith Richards. I am President and Chief Portfolio Manager and TechnicalAanalyst here at ValueTrend Wealth Management. Today I’m going to do a bit of a slide show, you could say, on why I think the market may be setting up for a bottom. Now that’s a little bit different from my message over the past eight to ten months or so, which has been leaning towards the bearish camp. In fact, I haven’t just leaned towards it, I outright called the bear market early this year and, in fact, warned of an oncoming bear market in late 2021. You can check all of my blogs online for evidence of those statements to see if I’m lying or not. So I’ve been bearish for the past number of months, many, many months, in fact, and now I am suggesting that while I am still very cautious in the near term, and I am recording this in mid-September.

My view is that we are possibly in the process of putting in a bottom and I’m going to not just make that as a flat assertion, but I’m going to present some evidence that mostly stems from the sentiment and the breadth momentum indicators that I use that are part of the Bear-O-Meter that I report on once a month on the blog. Let’s get started. I will try to whip through these fairly quickly, but I want to cover them a little bit one by one, I’ll start off with the put-to-call ratio. Now just briefly how the put-to-call ratio works. It basically measures the volume of “puts” traded on the market and compares it to the volume of “calls” in a given day, week or month, depending on what price chart you’re looking at. Now, what’s important to understand is “puts” are generally traded by bearish investors; “calls” are traded by bullish investors. So, the normal ratio is leaning towards more “calls” traded than “puts” in a given day. Why? Because generally speaking markets go up more than they go down. We know that markets do trend up over the long run and have a bullish bias most of the time. Therefore, you’re going to expect to see more “calls” traded. What I have found, and actually I wrote my thesis for my CMT, which is the Chartered Market Technician designation, back in the nineties on this little piece of evidence.

And it was first entry into sentiment indicators. In fact, I’ve grown to become a little bit of an expert in sentiment indicators. This was really the very first sentiment indicator that I began using in combination with momentum indicators and that was my thesis at the time that I wrote back in the 1990s. So that thesis by the way, was the base for what is today the Bear-O-Meter. So, the Bear-O-Meter uses the put-to-call ratio. And I use the same ratio that I wrote about in my thesis back in the nineties, which is if you have 1.25% “puts” for every one “call” you’re starting to get too many “puts” traded and that means the market’s too bearish. And conversely, if you get 0.75 “puts” traded per “call”, you have not enough “puts” being traded. It should be somewhere in the middle. And I find that these extremes can mark bottoms of the market because there’s too much fear, especially here.

So, you can see that we did hit an extreme this summer. Now we’re settled down to somewhere in the middle, more of normal times, but that extreme was hit and that can often indicate at least one sign of a capitulating market. But let’s not just use one piece of evidence, let’s look at a bunch of them. So, this is an indicator that I don’t use in the Bear-O-Meter but it’s still an interesting indicator and it measures the total exposure to stocks by people like me, portfolio managers. How heavily weighted are we in equity compared to our normal weightings? And what you’ll find is that a lot of portfolio managers aren’t that much better than retail investors and that shows up in the mutual fund statistics. So, you will be best to take a look at how the average portfolio manager is weighting their portfolio.

And if they’re extreme in one direction or another, you might want to use that as contrarian indicator. Now, because I am a sentiment guy, I am a portfolio manager, but I rely on sentiment indicators to tell me what dumb money is doing. I also want to know what my peers are doing because I know more often than not, they’re not right, particularly at extremes, I should note. So, we want to take note that portfolio managers have been underexposed equity, Hey, at ValueTrend, we are 40% cash right now, but we are also aware that lots of portfolio managers have just recently, you can see, piled into cash, and that may be a problem. So we, as sentiment orientated portfolio managers want to get a step ahead when the market is washing out. And this is one of the indicators I use, but it’s just one indicator again.

We must look at a whole bunch of them. This is the new high-low indicator. You can see it went to extreme lows, which is the number of highs versus lows on the New York Stock Exchange. And that was during the summer again. So I guess what I am building up to suggest is that this summer we may have seen a market low because many of these indicators, as we are seeing, reached an extreme pessimistic point this summer, and that is a contrarian indicator. So that does not mean that I am bullish as of today. It’s around the 14th of September it says on my computer. Well, I’m still holding that 38% cash in our equity platform, but I expect that that cash will be deployed pretty soon. We’re just waiting for the other technical signals to flash. And I will, of course, keep you in the loop.

And here we’ve settled back to more normal conditions. But the point is this big washout was pretty similar to the one that happened in 2020 during the Covid crash. And you know what happened after then. The market based and went up. Well, there’s another indicator in front of our very eyes that suggest that maybe the market has already washed its way out and found its bottom. That does not mean the bottom cannot be retested. I’m not saying that. The bottom was somewhere near 3,500. It could be tested again. But what I am saying is that I’m of the opinion that there’s a better than average chance that we have seen the bottom. Let’s get to the next indicator and the final one, which is the VIX. The VIX is the volatility index. It simply measures the premium on those options. Do you remember the put-to-call ratio we just looked at?

Now, we’re looking at the premium. What people that are writing options are charging for the options in premium. Well, the more scared they are, the more premium they want and the more protection that investors want from these options and the more they’re willing to pay. When everybody’s complacent, then the premiums are small because nobody’s worried about anything. And you can see down here, in say 2017-18, people were pretty complacent. Markets were very, very stable back then and that can’t last forever as we saw Now, here’s 2020, the COVID crash, but recently, and I’m going to take a better look at this, but you can see that recently we did spike into too much pessimism and I’ll take a closer look by looking at a nearer term version and you can see this was the summer of this year. 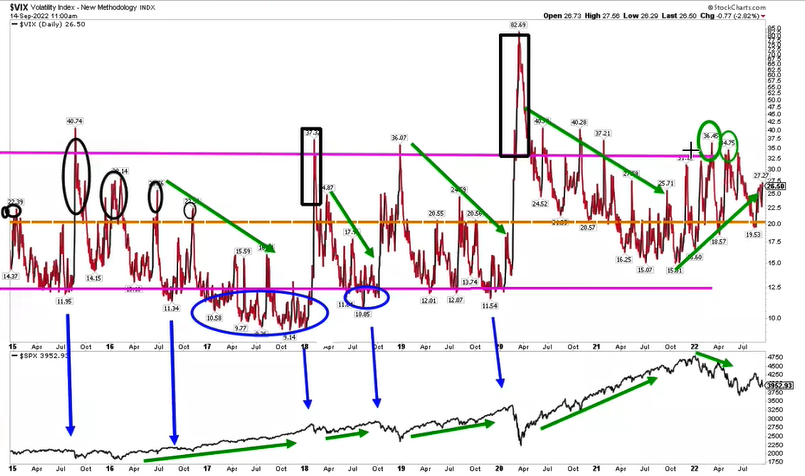 And you can see the level of the VIX did get into that wonderfully fearful level that tells us the markets we’re capitulating. Anything over this pink line tells me that the markets are beginning to capitulate. It can capitulate hard like it did during the COVID crash, or it could capitulate a little bit less so, but you’ll find that when it spikes, you tend to get some sort of a peak on the market. So when you get a trend though, that’s even more important. And what we’re seeing is, and I’ve shown this on my blog before, but typically the overall trend of VIX, which is the premiums of options, the trend tends to be down like options, pricing, premium shrink as markets go up because everybody’s happy and vice versa. So, we’re starting to see a reversal in that. I haven’t drawn the line here, but you can see the market was going down and premiums were increasing.

Of course, people are growing fearful, but look, we’ve definitely trended down. Sure, it’s spiking up recently, but there’s a lot of spikes on the VIX. You have to pay attention to the signal and not the noise as they say. So, the general trend might be pretty early, but might be for a declining premium in the VIX. And that’s often a sign of perhaps this bottom on the S&P 500 may be the final bottom in the current bear. I am not going to suggest that we know what’s happening, but there’s some evidence here to suggest that perhaps the market is setting up for a base. And you know, if you’ve read our recent ValueTrend research report, that we have an argument for the potential of a sideways market that may continue for some time. That could be the case. All I am suggesting is that some, not all, of the volatility indicators are beginning to suggest on a forward basis, that the markets are setting up for an end to the bear market. And these indicators tend to look forward by a few couple months, 1, 2, 3 months. So it’s not an immediate thing, but I think the argument is there that we may have seen the worst of the bear, even if it’s not over. I hope that helps and we’ll be back next week.