Today we’re going to cover a divergence we’re seeing on the Dow Jones transports versus the industrials and that, for some of you who follow the Dow Theory, is a familiar sign of what we call a non-conformation signal coming out of the Dow Theory rules. In my opinion, it’s the most important rule amongst the set. What we’re looking for is that a healthy market should be illustrated by both the transportation stocks and the industrial stocks going up together, making new highs at the same time, or at least trending in the same direction. Now, sometimes you’ll see a divergence like on my blog not too long ago, I think it was the beginning of November, where I noted that even though they were both going in the same direction, the Dow had not had a confirmation in a new peak between the industrials and the transportation stocks.

Now, that’s the weaker divergence of the two. The worst type of divergence that we can see is when the Dow industrials and transportations are literally diverging, meaning going in opposite directions. So that is a very strong sell signal. Now, it can be a signal for just a short term move or it could be a signal for a great big move. You don’t know that. But we do have to pay attention to Dow Theory divergences, and that means, in particular, we have to look at movements in direction. In other words, trends illustrating the movement of industrials versus transportations. So let’s look at the chart and this chart is the industrials versus the transportations. The black line here is the transportations and the red line here is the industrials. It’s a line chart because really we’re not so interested in the day-to-day candles and whatnot. We’re just interested in the direction. So a line chart only plots the close of the day.

But if you’re looking at a weekly chart, it would be close of the week. So what I want you to notice is the trend here. For example, starting off on the left side of the chart, most of the time the industrials, which is the red line and the transports, which is the black line, move together and that’s a sign of a healthy trend. At the same time when they’re going down, they’re both usually going down together. You can see the black line and the red line are moving together here. But on occasion you get a divergence and the transportations, which is the black line, can be a leading indicator for a soon-to-be negative move on the industrials. So let’s discuss how that works.

You can go back in history and you will see this happen over and over and over. Just so you can have a nice close look, this is just a couple of years worth of data, but you could go back 10 years and you would have seen the same pattern. And when the transports are not supporting the industrials, it’s almost always, nothing is perfect, but almost always a signal that the industrials are not going to continue in the current movement. In the year 2021, we had industrials, the red line, making new highs and you had transportation stocks heading down. Now what happened is eventually the transports followed suit, the industrials kept falling and the transports stopped their up trend and fell. Another example, we had industrials over this period of time going up, the red line was going up, the black line was going down. Whether you want to start looking at it here or there, whatever, but the trend was down while the transports were going up.

So that ended up with them both eventually heading down together. It was a leading signal, a leading indicator that the industrials were going to eventually have to decline. The reason I bring this up is because you are here, as it says on the map when you’re in a shopping mall. We’re right here and what we have just recently seen is the industrials moving up. In fact, many of you are aware the industrial index has been leading everything. It’s been leading the S&P 500, the Nasdaq, the Russell 2000, you name it, it has been the place to be. However, the transports of late, just very recently since the beginning of November, have been on a slight down trend.

They have most definitely been negatively diverging from the industrials. As I said, the history of this signal is almost always accurate. Now it’s pretty early in the game, and that’s the only caveat I’ll give you here. And that is that it’s only been happening for less than a month, this divergence in direction between the two indexes. So if this continues, it’s a high probability that the industrials will start to decline strongly. They’re off a little bit lately, but they’re still in a better trend as you can see in the transports. This is something that I want you to keep an eye on. Right now, your caution flag should be up, but it doesn’t mean you need to be out of your industrial stocks. However, if this continues much longer and they don’t continue to look like the Sesame Street Song, one of these things is not like the other.

If they start to show more divergence or maybe that was it and you’re going to get a Dow Industrial’s movement down now that you’ve had some divergence for three or four weeks. Either way it can be a dangerous signal and you need to be aware of this because it’s often very accurate as you have seen on the two year chart I presented today. But I challenge you to look up a five year chart and a 10 year chart, and you’ll find more often than not, the transports lead the Dow downwards ahead of time. 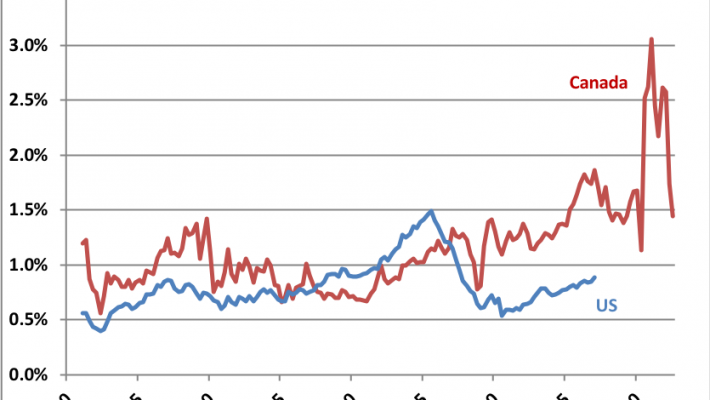