Do you have Gas?

Today we’re going to talk about gas, natural gas. Now, as you folks may know, in some circumstances, especially social circumstances, it may not be such a great thing to have gas. In fact, you may apologize for having gas. But for us investors, we think in terms of not so much the natural gas that we might produce, but the natural gas that we might buy as an investment. We can buy Nat gas futures. We can buy natural gas ETFs that mimic the futures. And we can also buy companies that are producers of natural gas. All three of these are influenced by the circumstances surrounding the direction of natural gas prices. So let’s talk about whether we should be ashamed or apologizing for having natural gas in our portfolios. And let’s just stop that analogy right here. So I’ll get to the program by looking at the chart of the futures chart, the spot price of natural gas. So let’s get at it. 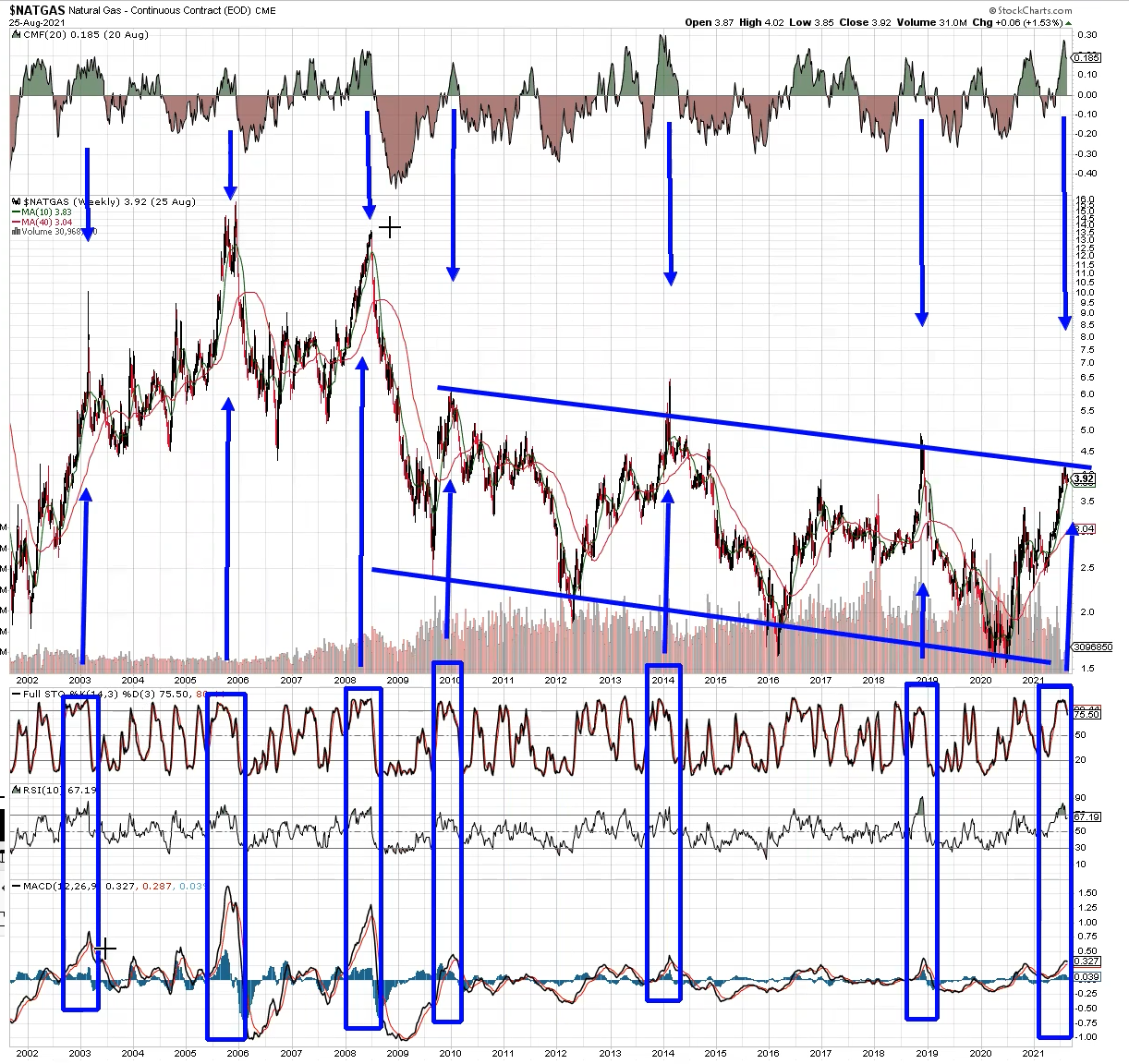 This is a chart of natural gas. It’s the continuous contract, and this has taken off of stockcharts.com and it is about 20 years of data. So it’s a, it’s a pretty good representation of the history of natural gas and what I want you to note right off the start is that natural gas peaked in price back in the mid two thousands, which I remember that was when energy prices in general were doing very, very well Canadian stock market was doing well because of the energy prices. Both oil and gas were doing extremely well. But then what happened was natural gas moved in from around 2010 and on, into a very gently sloping down channel. But within that downtrend channel, you can see massive, and I mean, massive swings like literally doubles and 50% haircuts spoken from a guy that doesn’t have hair to cut.

I do still recognize a haircut when I see one on the stock market. So I want to point out the commonality of what triggered or least indicated a decline in the price of natural gas, because I’ve received a couple of questions actually on the blog valuetrend.ca, where people ask me, what is my outlook for natural gas? And one person I answered that, I don’t mind the producers, but I’d wait a bit. But when it comes to the price of gas itself, I’d be a little bit hesitant right now. And let’s see why I might feel that way. So at the top, I’m going to have to roll this chart down a bit, but these are the peaks, the major peaks on natural gas right here that I’m running my cursor along. And it looks like we’re possibly in a major peak right now for natural gas.

So what are the commonalities of the indicators that might tell us that maybe right now is one of those circumstances where gas might decline? Well, first of all, we have money flow momentum. This is the momentum of capital flowing into in this case, the spot, the future price of nat gas and the futures. So you can see that there was a spike when there was a spike on money flow that coincided with, it’s very important to understand, one indicator by itself is meaningless, but when it coincides with other indicators that seem to have been accurate when they all line up for past predictive qualities, then you should definitely take notice. And in this case, when we saw stochastics reach an overbought level and MacD, which is a far more significant indicator, as far as longer-term trends, when it crossed negatively peaked from an overbought position and peaked and crossed its trigger line, which is this little red line here when it crossed that

and when you had a peak in RSI over bought status, and then an eventual decline that tended to result in a pretty significant pull-down from the highs you can see this over and over again. So you can see this peak back in 2006, you know, same circumstances. Look how high MacD got RSI was definitely way over bought money flow momentum was maybe not as, as high as before, but it definitely had peaked from a low level prior to the momentum of money flow is Chaikin’s money flow indicator. In ’08 we saw a major money flow peak, which lined up with the stochastic RSI, very overbought, well over the 79 in a very, very high MacD-line over and over again. Okay. So I won’t repeat endlessly each circumstance, but you can see, this is the case for natural gas for every major peak it’s had since 2003.

And so we’ve got enough data here to suggest that when the circumstances line up again, as they seem to be lining up right now, we might want to be concerned. So my thoughts right now is that you’ve got a touch of the top of a trend channel line, and you’ve got a rolling over of stochastics from a peak from RSI. It was very overbought recently. It seems to be rolling over. And although MacD hasn’t reached its historic super overbought levels, it’s definitely in the high range of at least the past 10 years or so. And it’s certainly looking like it’s about to start rolling over. So as far as my outlook for natural gas, I think it’s in a precarious position personally. I don’t think I’d be okay all over buying natural gas ETFs. And I don’t think it’d be adding new money or taking new positions, a natural gas producer, despite the fact that the charts on the producers look somewhat different because ultimately natural gas will be influencing those producers.

Now, what might change my mind on that? Well, that will be if natural gas breaks it’s downtrend channel. So that top of that channel roughly comes in at around $4. And if that level was cracked, then I think and I mean with conviction because you can get, by the way, when you see a level cracked, you get spikes as you have here on the low end, you had a spike here. You had a spike here, 2012 to the downside. As I said to upper small short lip spikes to the upper side and one in 2014, one in 2019, you have to be careful with spikes. And that is why I tend to use a rule of three. And in this case, because we’re looking at a long-term charter, I’d want at least three weeks above $4. So if this line, this downtrend line were to be cracked, then I’d want to see it break by at least three weeks.

And I’d want a several percentage point move over that I’d want a three, 5% plus through that line before I considered buying it. As at this moment, I would be very, very cautious about natural gas because the circumstances have lined up precisely the way that they have in the past, that resulted in peaks on the natural gas chart. So, well, hope that helps. And I will pardon you if you have gas in your portfolio, but I sure as heck hope you pay some attention to the consequences of the pricing of it. Yes, right now, and the technical indicators, what they’re telling you, and perhaps you will consider that in your analysis as far as owning natural gas into the near-term future and, or taking on new positions, thank you for watching. And we’ll be back again next week with more interesting ideas that will cover a variety of many topics. Thanks for watching.