Home / Comparing The Summer Rally To The Current Rally

What I want to do is compare the rally that we saw during the summer of 2022 to the rally that we are going through right now. This video was recorded on November the 23rd, and so far it’s been somewhere near 30 days of the market having a pretty good pop-off of a low point. In fact, that low point was a support level on the S&P 500 at around 3,600.

So what I want to know is the sectors that are seeing that rotation that are causing that market rally, and seeing if there have been any changes to compare the two rallies to see if there are any warning signs or anything else we should know. We want to divide and conquer, as I said in the subtitle, which means I’m going to divide it between the outperformers and underperformers. Now, some of you may subscribe to stockcharts.com, and if you don’t, I strongly recommend you do so. In fact, I do, as many of you know, a technical online trading course. On our website, you can click on it and there’s actually a bit of a discount for people who subscribe to our newsletter. So I recommend you take the course, and if you don’t have the discount code, I’m going to keep it going until the end of the month.

Shoot me at [email protected] and I will give you the discount. It’s good until the end of December. In that course, I talk about a sector rotation model. Now, there are different ways we can look at sector rotations. We can try to figure out what the market is moving into, which is the way I usually use it, but we can also try to compare things like I’m doing today, which is how does this rally look like versus the last rally. So let’s take a look at the summer rally, which was between roughly June 17th and August 17th. I think the bottom was on the 16th of June and it peaked out around the 17th of August. 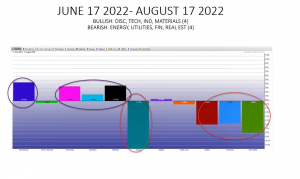 But, whatever, about a month. And what you will notice here is that energy was the big loser. So this is a comparative relative strength. This is not an outright return. When we see energy is negative 11.7% on the screen here. That doesn’t mean energy lost 11.7% that month. What it means is, versus the S&P’s rally, the market was up seemed to be it was around 10 plus percent. I’m trying to recall how much that rally was before it faltered, but whatever it just pretend it was 10%. So the energy sector underperformed that rally implying probably it went down a point or two. It’s a relative performance. If technology outperformed the market and the market made 10% that month then technology probably made 13. So that’s really how you read this chart.

It’s just a relative comparison. So what you can see are the winning sectors, the outperformers, and there is about four of them. And then the losing sectors, which the big losers were energy, utilities, financials, and real estate. So let’s compare that to now. There was kind of four winners and four losers. Now the other thing I want you to see is the extent of the winners. It wasn’t huge. It was a relatively well-distributed rally, but there were a couple of standout losers, but really weren’t a lot of standout winners. Now let’s take a look at the current rally, which began on October 12th of this recent fall rally and as I said, it’s the 23rd today so I have data update the 22nd. By the time you read this, it’ll be a little bit later, but you can see that the discrepancies have changed. 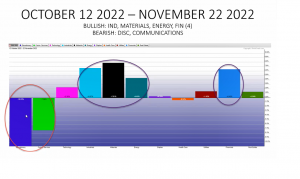 So energy, in fact, is a winner right now. And you can see consumer discretionaries, which were a positive, are the deepest loser of the group followed by communications. But really, if you’ll notice, the distribution between losers and winners were probably half and half. As you can see, there are four big winners and four big losers. This time you only have like two bearish-looking ones, which are communication services and discretionaries. A little bit down on the healthcare, but not too much, more or less in line with the market really. There’s been a pretty even distribution. There were some winners, there were some losers, and then a number of them were pretty close to at the market levels. So it’s not quite as polarized I guess you could say. But let’s take a look at the observations we can make after comparing those two relative strength observations.

So we are not comparing the market to the market. We’re comparing what the sectors were doing to the market during those two rallies. If the market had gone down in one of those two periods, you’d still see some outperforming, maybe losing less versus some underperforming, you know, losing more. It’s a relative performance. It’s got nothing to do with raw performance. What we’re trying to do is compare a rally to a rally and that’s really important to understand. During the summer rally, what did we see underperforming? Well, we saw energy, utilities, financials, and real estate. That’s actually four. I wrote three here so ignore that. Then we also had discretionary, tech, and materials that outperformed in a fairly big way.

In the fall rally, which is the recent rally, I’ve highlighted discretionary here because it was one, we will talk about this in a second, but it was one of the ones that actually completely changed from being an underperformer to an outperformer.

I should say from an outperformer to an underperformer. So you can see that in the summer, discretionary was one of the outperformers. We had discretionary and communications both underperforming. Remember we just looked at it. There are the two of them. We have those doing a lot less work in this rally than the rest of the sectors. Now, recent rally as well though, we’ve seen industrials, materials, energy, and financials moving well. So the new outperformers, the ones that were not outperforming during the summer rally, which were discretionary, tech, and materials, are industrials, energy, and financials. In fact, if we go back, you can see energy in the summer rally was a very big underperformer.

So that’s really interesting. Doesn’t mean you necessarily go on and buy them, but they are certainly something you should be examining. All three of these though, in this current rally, are where the money is going and so that’s what you want to be looking at if you’re going to play this rally. Now, I’ve written blogs and I’ve been saying, I think this rally can last to maybe the end of the year. That’s an educated guess. Nobody really knows. After that, I’m curious as to whether we get another leg down, and that’s just a curiosity, but if I had a gun held to my head and somebody said, I’ll pull the trigger if you’re wrong on this guess then I would guess that we will get a leg down after the rally ends somewhere near the end of the year or the first week or so of January.

But that’s just an educated guess and you’re holding a gun to my head here. So my thoughts are that for the rally, the time being, it’s clear industrial, energy, and financials are getting the money. If we’re going to play this rally, whether we stay with it or not is another question that’s more of a market question, but if we want to stay with this rally for the play, the trade to the year-end, then we want to have at least some sort of concentration in those three sectors with maybe a little bit of interest in energy and financials. But that’s up to you because it comes down to looking at the charts first and I have been discussing energy a lot lately because it has been a little bit underperforming in just the past few days. So the past month it’s been an outperformer, but not necessarily the past week.

So, those are the three sectors that I think we need to look at for this rally, and really that’s the way I always look at things. I’m not trying to figure out what’s going to happen a year from now because so many things happen in a year, but I am trying to figure out, based on the macro look of the market, what might be the place to be for at least the next target that I have in the market. Those are the three sectors that I think are the places to look right now.

If you have any questions, as always, you can post them to my blog. Please don’t send me inquiries through the info at email address.  If you want to send me an inquiry regarding portfolio management, then you use the [email protected], but if you want to make a comment regarding my blogs, put a comment in the comment section.

I appreciate that because it is a community effort. We’re trying to keep everybody involved and I will answer your questions right on the blog. I hope that helps and we’ll see you in a week.