This is a weekly recap of our blog series that I do on our website at valuetrend.ca. By the way, I am a portfolio manager and president and founder of ValueTrend Wealth Management. And what I’m going to do is share with you the highlights from my biweekly blog every week on this video series.

So I’m going to start with the blog that I did on Tuesday, which is the second blog I wrote of the week. And normally I like to highlight the first blog, but I really want to set the tone here, which was an overall market indicator that I talked about on Tuesday. And we use something that measures the risk versus the reward potential. Remember markets always have the potential for risk and reward. 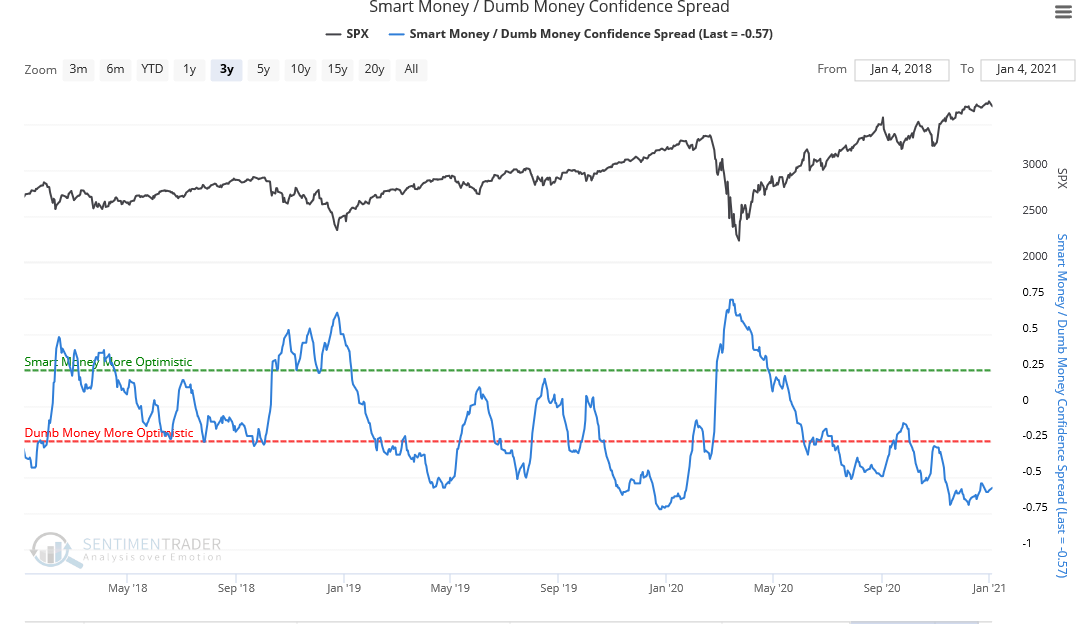 This is a quantitative indicator that tries to measure both the weighting of risk versus return at any given time. And just because you have a higher risk indication, doesn’t mean markets, can’t go up. And just because you have a lower risk better reward, potential situation doesn’t mean markets can go down. It’s just a weighting of, of the two. So this is called my barometer, as I noted. And it’s got many different factors, including trend and momentum and breadth indicators. What I want to do right now is share my screen and just show you one of the indicators that was signaling caution. That was the smart money, dumb money screen. So this is an indicator that pits investor confidence by two groups. Smart money is considered smart because they’re typically more successful investors. They’re typically institutions, hedge fund managers, large pension managers and pension plans.

These are the money that tend to have better research, more control over their emotions, that kind of thing. And we’re seeing that the confidence level differential is that smart money is less confident than dumb money, which is retail investors who tend to buy mutual funds in ETF. So we track mutual fund ETF flow, that kind of thing. This is sentimenttrader.com and it’s a subscription service. So what I’m showing you is the screen off of my subscription service. I highly recommend this subscription. It’s very cheap. And I think it can be very valuable for investors to get a feel on overall market sentiment. So you can see that whenever our confidence spread, where we’re retail investors were more aggressively bullish than say institutions like pension plans and hedge fund managers, where you’ll see that the markets, it tends to be a leading indicator, but eventually the markets tend to sell off.

And you can see, we were in that situation here, it took about a month or two same with here. That was, that was a good couple or three months. So, you know, you have to be cautious with this. It has been in that area for a while, and we have had minor corrections on these signals. You know, a move back into the neutral zone here. And we’re in a bull trend. So just to be cognizant that the barometer, which did signal five out of eight, which is a relatively bullish reading is still showing some signs that maybe we’re setting up for a correction in the next number of months. I wouldn’t get too wrapped up in that reading, but it’s just something to be aware of. So that’s one thing I wanted to talk about. The other thing I wanted to talk about, was my first blog, which is on Monday, and that was on just the overall look of the commodities market.

Somebody asked me for the overall commodity argument. And so I’m going to share the screen again, and I’m going to go right to the blog if I can do so, just bear with me and we’ll go back to the smart money, dumb money, that I had highlighted my block. Regular readers of my blog will know that back in the summer, we were like actually early summer, we were kind of early on this move, but we were very pessimistic about the outlook for these super high PE ratio Fang stocks like Amazon and Facebook and Netflix, you know, the stay inside stocks like Zoom and Peleton and whatnot. We thought they were way over valued. So we pulled out of these stocks like June, and we were way early because those stocks continued to move up into about August.

But then they basically all peaked around August and we moved into the commodities space as well, some value stocks. So while our first half of the year, we underperformed the markets, in our second half, we killed it. And it’s because of our decision to move into commodities. Now, this is, it’s not every commodity that’s moved up, but this is the grand commodity index the S and P, CGS commodity index. And you can see that on a relative basis, it’s had a move off of a bottom. It’s been in a big downtrend since 2008. But I feel that the commodity space still has, you can’t probably read this number, but about 24% more upside on a grand basis on a larger basis. And a lot of that will be driven, I think by certain very overlooked commodities like oil. And of course, I’ve been on the metals and whatnot, which is what caused our portfolio to do relatively well in the past three or four months compared to the market.

But I feel that there’s more of that to come. And we’re seeing that right now after the Georgia election shows, the Democrats are going to have a stronghold. And of course, they’re going to pump a lot of money into the system. And we can argue about that all we want, but it’s generally a not bad thing for the overall market, but it’s particularly good for commodities because they are inflation hedging vehicles. So that’s one of my arguments all along has been that you’ve got to buy reflation stocks as they’re called. So this can be gold, commodities, and value as well because value stocks are undervalued. So one of the arguments, again, behind inflation from a technical perspective, this is the US government’s inflation CPI tracker. And you can see that, you know, although it’s been in a downtrend since ‘08, follows a very similar pattern you’ll see is as the commodity index, it too is breaking out. 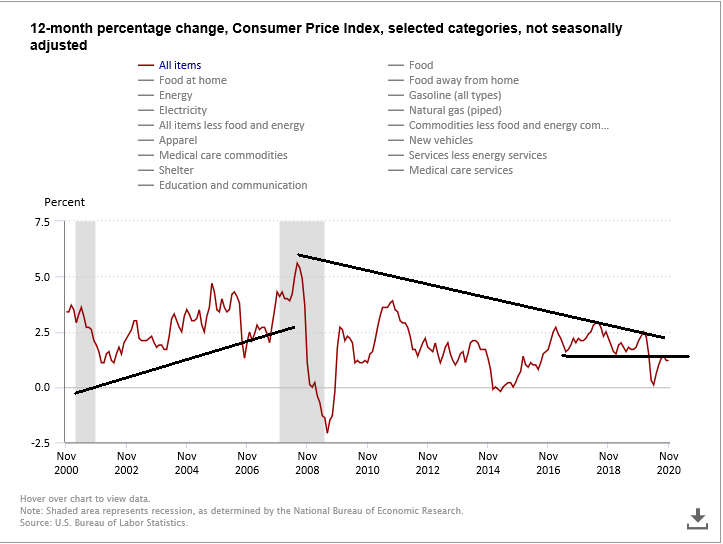 And again, I, I think it’s, you know, you’ll see inflation pick up and especially with all this money printing.

So that’s the highlights of this week. And I do want to remind you again, read the blog it’s www.valuetrend.ca. There’s a comment section you can comment and it’s kind of a community thing. So you know, please, do read it.

The other thing I want to mention is that it’s my conviction that investors who don’t react to these changes like we did this year with the move out of the fangs and whatnot, which I think, by the way, it’s going to last a while, especially with Biden in power. And, and into the more value and commodity based stocks.

If you’re not prepared to rotate in this way, and if you’re not, if you don’t think that your portfolio is structured, or you have the ability to ride these trends, you might want to consider talking to us at ValueTrend because we’re pretty good at that. We’re very cautious investors. Our objective is not to, you know, spank the market. It’s more about preserving capital, but moving with the cycles. We think that we’re the tail end of a bull market. That could be another couple of years, maybe five years, but it’s not, you know, it’s already been going for close to 10. So we think that there are a few more years left in this bull market, but typically there’s more rotation as markets get closer and closer to the end of their cycle in a mega bull market. So that’s one of the things that we do well, and we’re pretty good at identifying bear markets as we did in the last major correction, 2008. So we’re happy to meet with you confidentially if you do feel you would like to discuss your own portfolio needs.

If you’ve been riding the wave on this ball, that’s, that’s good. If you think you’re prepared for a cyclical rotation using the tools that we discussed on my blog then great. But if you do feel you need some help, then you know, that’s, that’s what we’re in business for. So again, thank you very much for joining me here and I’ll be back next week.