Hello, and welcome to the Smart Money Dumb Money show. And I’m your host, Keith Richards, I’m president and chief portfolio manager of ValueTrend Wealth Management. Relatively short video today, I am just going to be focusing on the Canadian dollar, and then I have a bit of an announcement at the end of this video. So let’s, let’s get right to it. People are asking me whether the Canadian dollar, which has taken a bit of a backseat to the US dollar, is going to pick up and be a good investment or a, an outperformer in the next little while. And I’d just like to take a look at both the chart of the dollar versus the US dollar. And it’s a chart that many of you have seen before if you follow my blogs because it’s a long term chart and I’ve literally drawn these horizontal lines on this chart anywhere over the past 10 to 15 years.

So these lines have been precise because I drew them many, many years ago on this chart, at least 10 years ago and they just continue to provide support resistance levels. So I think from a technical perspective, we can really learn from this chart and that’s the reason why I use it over and over again because those lines don’t change. And then we’ll look at the seasonal factors. So let’s, let’s get started. I’m using a laptop so I actually have to, I don’t use, a mouse, so you’ll see my hand pop up once in a while. Okay. So this is the chart that I’m referring to. It’s the Canadian dollar and it’s a really long-term view. It goes back to 2002. So we’re talking 20 years. And what you can see is that these lines, which as I said, I’ve drawn many of these lines over 10 years or so.

This particular line here used to be a level of support back in 2008. And it has proven, even though it has been broken, it’s been proven to be, you know, when the, when it, the market does breakthrough on the dollar, below that level, which is somewhere around 77 cents, it acts as a little bit of a level of resistance. And then when it breaks up above, then it can act as support again. So you can see the support there, there, and you can see it as well as 2015. And of course, going back to 2008. So that’s what we’re seeing lately. And in fact, if you were to look a little closer, now this is a very big chart, but you would see that the Canadian dollar has been bouncing off of 77 ish cents and kind of hanging between there and 80 ish since for the better part of six months or so.

And it’s, it’s really been struggling to catch a bit, although it’s not obviously a bearish looking chart, it is a consolidating looking pattern and that’s not such a bad thing. Stability’s great for currency, especially as Canadian investors. If we are swapping between Canadian and US dollars, as we maybe sell a Canadian stock and decide to buy a US stock and then sell the US stock and, and go back to a Canadian stock, as we do at ValueTrend quite frequently, we will move based on the sector and the individual stock. And we worry less about where that company or ETF is located and the currency, unless the currency is showing very deep bearish patterns or conversely bullish patterns. If we at ValueTrend, see this chart showing very strong evidence for a strong Canadian dollar or a rising trend in the Canadian dollar, we will want to lower our US stock exposure simply because it’s fighting a current and vice versa. 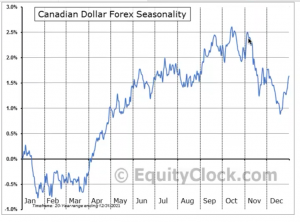 If we feel that there is a bearish-looking Canadian dollar, we will usually move into US dollar securities with a little bit more confidence. Right now, as none of the above, we’re looking at a pretty benign-looking sideways pattern where as I said, 77 to 80 cents seems to be the pattern. So let’s take a look at why that may be happening and I’m going to look at, good old equityclock.com, which is a service that provides charts on the seasonality of basically everything you can think of. My only criticism about equity clock is that they usually use fair, short-term data. They’re only going back about 20 years in this case. So it’s not necessarily a super long pattern. So if you want longer-term patterns, Brook Factories Guides usually look back 50 or 60 years, but generally speaking, these, these, I love equity clock because their charts are so easy to look at.

So that includes crude oil and nat gas. So with that in mind, you might expect that the Canadian dollar would follow the seasonalities of say crude oil. And in fact, it does because if you know anything about the seasonality of oil, it tends to have its very best months between roughly February and the spring. Well guess what the Canadian dollar does. It has its very best months between March and the spring. So pretty close ties there. So that’s, that’s my outlook for the Canadian dollar. And that is that you may see a lot of jig and jag, it is not a bearish looking chart, but it’s not really exciting. I wouldn’t be selling US dollars to try to take advantage of a weak Canadian dollar because it doesn’t look like it’s going to turn until a few months from now, if the seasonals play out and the chart certainly suggests it is going nowhere.

So that’s, that’s, my outlook as benign for now, but do look for a real bit of strength in the Canadian dollar in the spring. Now on the subject of seasonality, I have just put together a very, very comprehensive course on technical analysis. Now I designed the course for intermediate investors and I took a survey, perhaps someone watching this video right now is one of the survey participants. So I took a survey back in the spring of 2021, asked investors that read my blogs and watch these videos, what they wanted to see in a course. And I took every single bit of the suggestions into account when I designed this course and the bell curve of what people wanted was an intermediate level course. My blog readers and whatnot are not sophisticated necessarily, but they’re not beginners either. So I’m hitting that bell curve of the people who I know, watch my videos and read my blogs.

And so it’s going to be, I think a really good experience for anyone who wants to take an in depth, money management and technical analysis course, I’m really excited by it. It was a huge project. I literally started it in the spring and didn’t finish the recording and the notes and everything until December of 2021. So it was, and I worked away at it pretty consistently with my producer and on my own. So I tried to cover from step one to step 100, all the different factors that go into the process of analyzing the macros on the market and then looking at the sectors and then deciding what stocks you’re gonna buy, how to sell them, how to position them as far as allocations of sectors, the percentage in your portfolio, the allocations of individual stocks, ETFs, whatnot.

And, I also covered things like hedging and selling for a loss and other factors that I don’t often even, refer to a lot on the blog like Elliott Wave and the Federal Reserves actions and stuff like that. So it’s, it’s about seven hours of video. Plus it’s got quizzes and all kinds of stuff, and it’s not a ValueTrend Wealth Management adventure. It’s really just something that I’m doing on my own. So it’s, we’re not marketing it a lot through ValueTrend or anything, but I just, and I’m honestly, I am not charging much for it because I really want investors to be able to take advantage of this. I kind of did it as part of my legacy in the business more than, some way I can make money because it costs an awful lot to put this together. And if you see the price I’m charging on it, which is basically $100, you would be, have to do a bit of math to determine that it’s gonna take me a while just to break even on the darn thing, let alone make some money on it.

Actually, I think my costs were closer to 4,500. So anyways I’m excited about the course and I think anybody watching this video will get a lot out of it and I’m really looking forward to the feedback. So, we’ll post a blog next week and I’ll just let you know the URL that you can go to and order the course if you wish and watchers of my video and readers of my blog do get a discount. So you can look for that in the blog. So thanks very much for watching this video today. And we’ll look forward to seeing you through my camera lens next week. And we have lots of exciting stuff we’re going to be talking about in 2022. Cause I really see this as a serious year of change and we’re already starting to see signs of that at the very beginning of this year. So thanks for watching and we’ll see you next week.