Welcome to the Smart money, Dumb money show. My name is Keith Richards. I’m your host. And I am the president and chief portfolio manager at ValueTrend Wealth Management. And I’m also the chief cook and bottle washer. I sometimes even clean the toilets. So today we’re going to talk about my least favorite subject, but I know it’s some people’s favorite subject. So, you know, doesn’t matter what I like. It’s what you like. And that’s what the show is all about. Some people have a very high interest in cryptocurrencies and Bitcoin. And the reason I don’t really care to discuss these vehicles is because I don’t like to talk about or trade what I don’t understand. And I really do not have an opinion, certainly not an informed opinion on whether these vehicles will ever be a currency replacement, whether they are good inflation hedge, are they an inflation hedge that will help bet against declining currencies throughout the world or just the US dollar?

Are they a replacement for gold and the gold standard that some people, people harken back to the days of the gold standard? I can’t answer any of these questions. I really don’t understand cryptocurrencies and Bitcoin enough to comment other than from a technical analysis perspective. So today, guess what, we’re going to look at some charts and we’re going to get right to it because it’s really just one chart. I’m going to look at sort of a midterm review of the Bitcoin index, which is the New York stock exchange Bitcoin index. And then I’m going to look at the daily view. So, we’ll just see if we can take a look at, from a trader’s perspective for those of you who do understand cryptocurrency myself, not being one of them. We’ll look at the technical potential of this particular vehicle Bitcoin and see what the charts have to tell us. 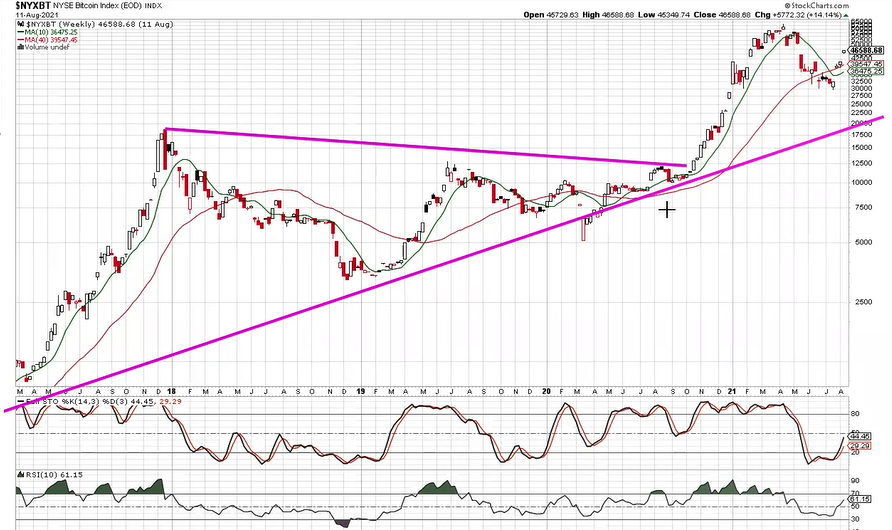 So, this is a weekly chart of, as you can see in the top left the New York stock exchange Bitcoin index, right? And you don’t really have the ability to draw a long-term chart of Bitcoin because it’s really not been around that long, but we’ve got a few years of data here going back to 2017. And what you can see is that the Bitcoin index moved in a large, right-angle triangle. So, a symmetrical triangle is a little bit different in that it has more of a rhythmic looking symmetry. This is more of a right angle to it. It’s probably not a perfect right angle triangle, but it’s good enough for me. All we’re looking for with the triangle, and all it signifies is that volatility some time ago, going back to 2017 was very high. You can see the swing from whatever this was, maybe a thousand dollars or a thousand points to at one point 15,000, and then it fell to 2,500 and on and on.

But you’ll notice the volatility got smaller and smaller, and this is what forms a triangle, and the market does not like stagnation. And whenever you get any security, a stock, the stock market, an index, whatever, a currency, anytime you see consolidation, as the pattern gets narrower, and you go from a period of high volatility to a period of extremely low volatility, you know, that’s not going to last because what happens is particularly with something that had volatility in its past, the market players are going to give it that move up or down. Once again, at some time in the future. It’s almost a foregone conclusion. So, the trick with any triangle is to watch which way it breaks out. And in this case, it obviously broke out to the upside perfect breakout. And if you are an old school technical guy like me, you measure the former length of volatility and then you extrapolate it forward and you use that as a target, and that might’ve come close to being achieving.

So that’s achieved, I should say. So that is an indication that the triangle proved to be accurate. In the meantime, you’ll notice that Bitcoin has been in a very rough, volatile looking uptrend, and it does look like it’s kind of rounded over on that uptrend but didn’t quite touch the trend line the 50 day, which is in this case, it’s a weekly chart. So, it is a 10-week moving average cross down, bearishly through the 200 day, which is a 40 week moving average in this case, you’re looking at a technically, somewhat bearish cross, but these crosses don’t always mean bad news. Now here it did. Okay. So, we should be aware of that, but the positives on the chart that I’m looking at here is if we look at the weekly stochastics, it’s actually created a higher, low here, and it’s hooked up from a very oversold position.

RSI didn’t get super oversold, but it certainly reached the bottom of its general momentum, and it looks like it’s hooked up quite nicely. This is comparative strengths to the, in this case, to the New York stock exchange, the S&P500, I should say. So, the Bitcoin index is starting to gain some traction against the market at the stock market. And probably the most significant thing I’m seeing here is the MacD, which is a nice histogram hook up. It’s about to cross the zero line. And you can see that the Mac D as the similar manner wants to cross its own moving average here. Okay. So, it’s a few factors there’s that we’re looking at here that suggests that maybe Bitcoin is going to continue this uptrend. Now, could it fall to the trendline? Yes, it could. And so, I’m not sure that today would be the day to buy it.

But there is the makings of a possible opportunity. And I want to just take a look quickly at the daily chart that might give us some indication on the possibility of near-term volatility. So here, this is just a line chart, but it’s the same idea. There’s a line chart of the New York or, sorry, of the Bitcoin index. You can see it kind of has pulled back a little bit of a consolidation there, and it seems to be breaking out, which is all very bullish. However, the, the sentiment shortly, not sentiment, but the momentum indicators like stochastic and RSI are pretty overbought. These are shorter term momentum indicators. So, you don’t necessarily trade long term off of them, but there is a little bit of overbought environment. Now, those overbought situations, as you can see here can last a while. So, stochastics can stay high for very long periods of time.

As you can see here, like months at a time, and RSI can too. So, this, this overbought signal we’re getting may not be all that significant, but it’s something you should keep an eye on because when they hook down, as you can see, they hooked out and that can often result in a significant pullback. Now, MacD though, even on the daily chart is looking pretty darn bullish. So not a little bit longer-term indicator. So, both on the weekly and daily charts, we’re seeing a pretty positive-looking picture with the potential. Maybe for some pullback, I, as a trader, I probably consider legging into Bitcoin. And that means that if you wanted a given position, let’s say 6% of your portfolio, I’m just using that as a number. It’s not a recommendation. You might consider putting one or 2% in at this moment, and then waiting to see if it continues moving off of that little consolidation pattern we saw on the daily chart by some more to me is a trade only. So, when you see the upswing on this chart begin to round over, you’ve seen what it did on the weekly chart. It tends to round over and fall pretty hard. So, my own 2 cents worth is it might be an okay trading opportunity right now to get into Bitcoin, but I’d be very cautious about entering it a bit at a time and don’t commit too much capital upfront. It’s a very precarious semi bullish look right now. It does have potential, but it’s not a hundred percent exciting in my view still there’s potential. So, my view is a possible short-term trading opportunity. Look for an exit if it does make you some profit and get out, because this is not a buy and hold type of security, at least in my view. Thank you very much for watching and be sure to visit the blog, which is filled with a lot of different topics that go into much more depth than I do in the videos here. So, I do hope you subscribe to the blog, and if you don’t already, you can subscribe to the video which will arrive in your mailbox every week. Just like we do with the blog for our something like 3000 blog readers. Thank you very much for watching and you have a great trading day.