Well, hello there. And this is another edition of the Smart money, Dumb money show. And I’m your host, Keith Richards. It’s June 24th, 2021. And today we’re going to talk about one indicator and just one indicator. And it’s an indicator that I spoke of in my upcoming book called Smart money, Dumb money, beating the crowd through contrarian investing. And I wrote a blog on the book this week. And in fact, I took a chapter or part of a chapter right out of the book and posted it on my blog. So I encourage you to read the blog if you have not already done that to get an idea of how I use contrarian indicators in my overall analysis. For today we’re going to look at just one indicator as I mentioned, but it’s a very popular well-known indicator. So I thought it’d be kind of fun to bring it up.

It’s not one that I use in the ValueTrend bear-o-meter. Some of you are familiar with my bear-o-meter. Bear-o-meter is a collection of various indicators that fall under the categories of trend market breadth, value, seasonality, breadth, momentum, and sentiment. So this is an example of a sentiment indicator. What we will be going over in a minute, but it is actually not used in the bear-o-meter collection of 11 indicators. The reason I don’t use it is that it’s signals are generally already covered by a number of the other indicators that I use such as the Smart money, Dumb money indicator, and even the put the call ratio indicator. It’s kind of an overlap, but I think it’s a good idea to go back to some of the basic sentiment indicators. And this one is accessible to everyone.

You can get it free on the internet. And it’s called the AAII Investor Survey. And I bet you some of you have heard of it. AAII stands for American Association of Individual Investors. So what I would like to do is show you the website that you can go to and get this data for free. And it’s a pretty good sentiment indicator. As I said, I just use a number of others. So I would be duplicating in my bear-o-meter if I used this one, in addition to the ones that I already use, but by itself for investors like yourself, this is a pretty good one to keep your eye on, to get a flavor as to how optimistic individual investors are. And remember, individual investors, and I’m afraid to say it, but that’s me and you – ordinary people. We are classified as dumb money.

We’re generally as a group. Not necessarily you and not necessarily me, but take a thousand of us individual investors put us in a room. And on average, more of us are going to be enthusiastic and buying at market tops. And more of us are going to be capitulating and selling at market bottoms than our counterparts who are in the dumb money, sorry, the smart money category. The smart money category, our institutions, their pension managers, the commercial hedgers, large traders, professional traders. These guys and ladies are smarter than average. So when we look at the, AAII survey, it’s a survey of retail investors and what we want to find out is how the average retail investor is looking at the market. Again, any individual within this group that is taking part of the survey, may be a very accurate trader may be very good at what they do, but the majority of them at market peaks and market troughs, and that’s where accounts are going to be wrong. 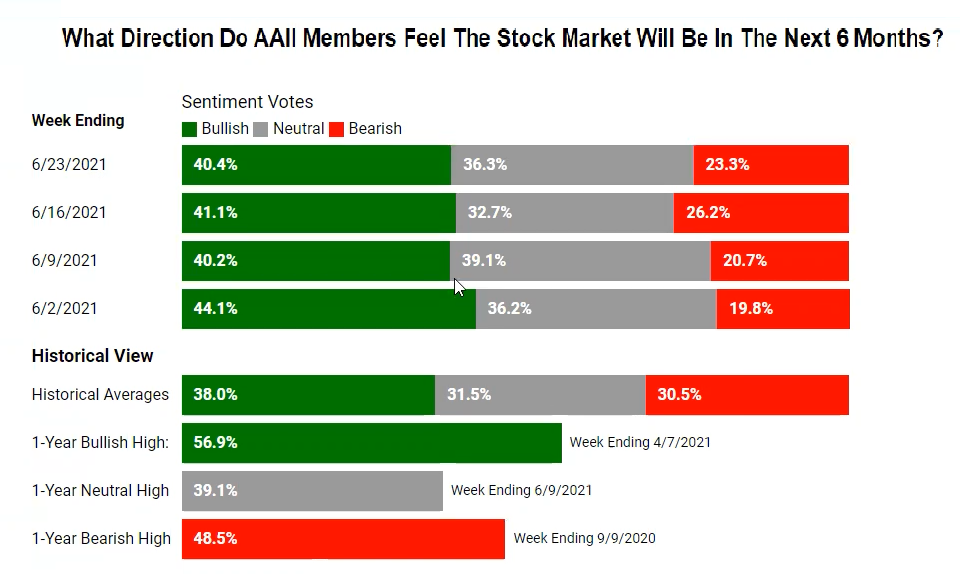 So let’s look at the survey. So first thing I want to do is I’m going to share the screen and I’m going to go over to the website. So this is the free data it’s, as you can see on the screen, it’s aaii.com sentiment survey slash sentiment survey. And this is the most recent survey taken on the 23rd of this month yesterday, I guess. And it was 40% roughly bullish 23% bearish. Now, what I have found as a general rule is that when the indicator gets into two thirds bullish versus one third bearish, or even 60, 40, you’re starting to get into the territory where it’s people are too optimistic about the market. You don’t have that right now. Like when there’s a smaller number, there’s a lot in a neutral territory here. There are very few bears. And there’s a fair number of bulls.

So let’s see how this is presented in another screen. We’re going to go to, for those who subscribed to it, the stockcharts.com site, and this is a subscription site that I use. Now you can get a non-subscription free version, but it’s not as good. But many of you watching this video, I’m sure subscribed to stock charts. Cause it’s not that expensive. I think it’s a few hundred bucks a year and you get access to all kinds of data and charts like this. So what I’ve done is I pulled up the AAII bear, which is the bear’s index. And what this is doing is it’s showing us just how many bears there are. Now remember we’re at about 22% bears right now, now somewhere around 22% bears is where we get into the zone. I don’t have too few bears when it drops below 22%.

So down to 20% or worse, that means we’ve got way too few bears. And, you’ll notice that when it gets well below 22, 2% so well below, not just maybe a couple of percent, you’ll notice that it tends to indicate markets are getting rich and are near a possible topping point. So, you know, going back to the end of 2019 and going back to the middle of 2019 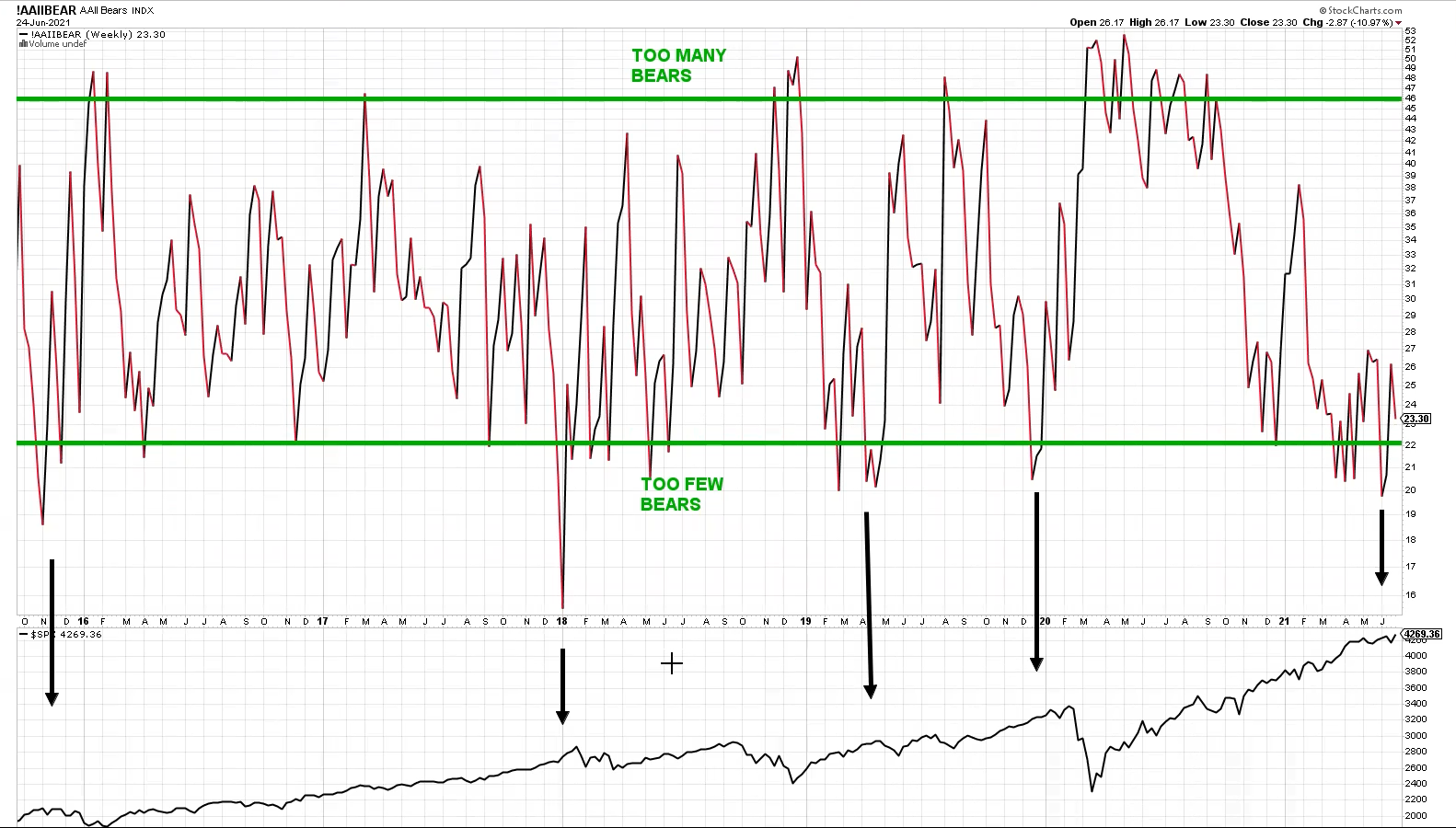 e had another correction in there. Some of the corrections are bigger than others as you can see on this chart. We have a period in 2018 where, where things were getting a little bit, too many, too few bears, too many bulls. This is strictly measuring bears by the way. And then even going back to 2015, and you can see that there was a fairly significant drop in the number of bears. And of course this coincided in the rolling over of the market.

A lot these corrections aren’t big, but they are still something to keep an eye on if you’re thinking of selling your stock. You’d made some profits and you’re getting a signal like this. Maybe it pushes you all the more to sell your stock. It doesn’t mean run for the hills because obviously many of these corrections are pretty small. So that is the general idea of how using the sentiment trader sorry, the, the sentiment indicator AAII is used. You can either go to their website and look at the match between those embarrassed and look for a two-thirds bull area. And that’s when you tend to get into trouble or about 22% or less preferably less bears. And that’s when you get into trouble. So both of those almost go hand in hand sometimes. And but you can access it for free. Now, the next thing I want to bring your attention to is that.

I have written an entire book on sentiment trading. And in my usual style, I brought you through many different set of indicators, as well as some new indicators that are out there, including alternative data. And this is a very fascinating area. And there are some alternative data sources that you and I can access and spend little or no money to access this data. And I talk about these indicators in my book, as well as indicators like the AAII that I just mentioned. And I give all the trigger points for buy and sell signals risk, or no, or less risk I should say, signals and how to use the various indicators. And at the end of the book, I put together a strategy. I used an example of a fake investor that I made up who had a terrible track record. And when this person involved sentiment trader trading into their technical method of trading their performance improved as an investor.

So I walk you through an example of how you can marry the two, let’s say sentiment trading and traditional technical analysis trading. So this is the book it’s called Smart money, Dumb money. And pardon me, Beatles for, for looking like it’s an Abbey road album cover, but it’s not because it’s a kind of a skinny guy with a bald head walking across the road. I don’t know who that might be. So a full document on learning how to use smart money versus dumb money type of indicators, and then putting it together with the technical analysis trading program so that you can become more proficient as an investor. And this blog copied part of one of the chapters from that book. So it might give you a good introduction as to how I wrote the book and how the book will present the data and the information in a very usable reader-friendly version. It’s not a textbook it’s written for ordinary people, and I hope you enjoy the book if you do take the time to read it. So thank you again for watching as always. And I hope that little introduction to the AAII helps and gives you some ideas and where you’ve been sourced the data and what you should be looking for when you are following such an indicator. I will see you next week. Thanks again for watching.