USD outlook, and some potential hedges 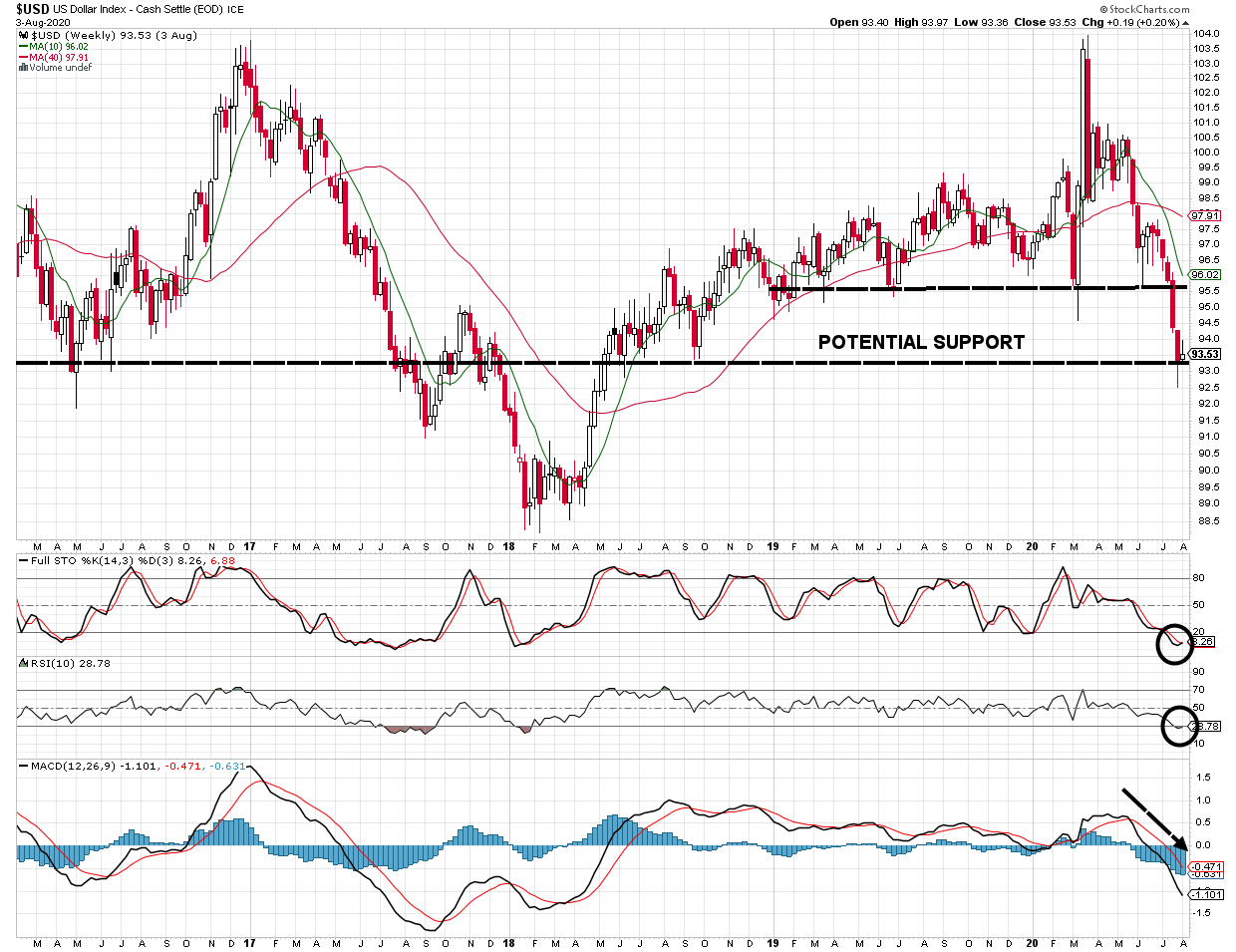 After peaking during the COVID panic in March, the USD has declined more than 10% from that high level of 103. The chart above is that of the USD vs. the world basket of currencies. You’ll note on the chart below that the decline by the USD helped the loonie, but to a lesser extent. The loonie rose by less than 7% over the same period.

Note on the USD chart that it has fallen to a support level that has been touched a few times in the past. This, in combination with clearly oversold momentum indicators might suggest at least a pause or bounce in the USD before any more bloodletting. I noted in my last blog that I’m longer termed bullish on the USD vs. the C$ (which doesn’t necessarily relate to how the USD is doing vs the rest of the world). MACD is the only momentum indicator on this chart that shows no sign of hooking up.

If we are to assume that the USD eventually breaks the 93 zone, we’re likely looking at about another 5% decline vs. the world basket of currencies. Technical target would be 89-91. Again, this may not translate as directly to the USD/ CDN$ relationship. Whatever the case, a few readers asked me about hedging the USD should that happen. Here are a few ideas that might help with that goal – I’ve chosen ideas that may benefit from a weaker USD. These ideas also present potential upside due to technical and fundamental factors beyond the potential currency hedge.

Yes, everyone is aware of this one. Gold is possibly the most “known” negatively correlated asset to the USD out there. The chart below illustrates this tendency–note the correlation line. Gold just blew through historic resistance near $1900. Sure its overbought, but its got some good upside despite a potential neartermed pullback. 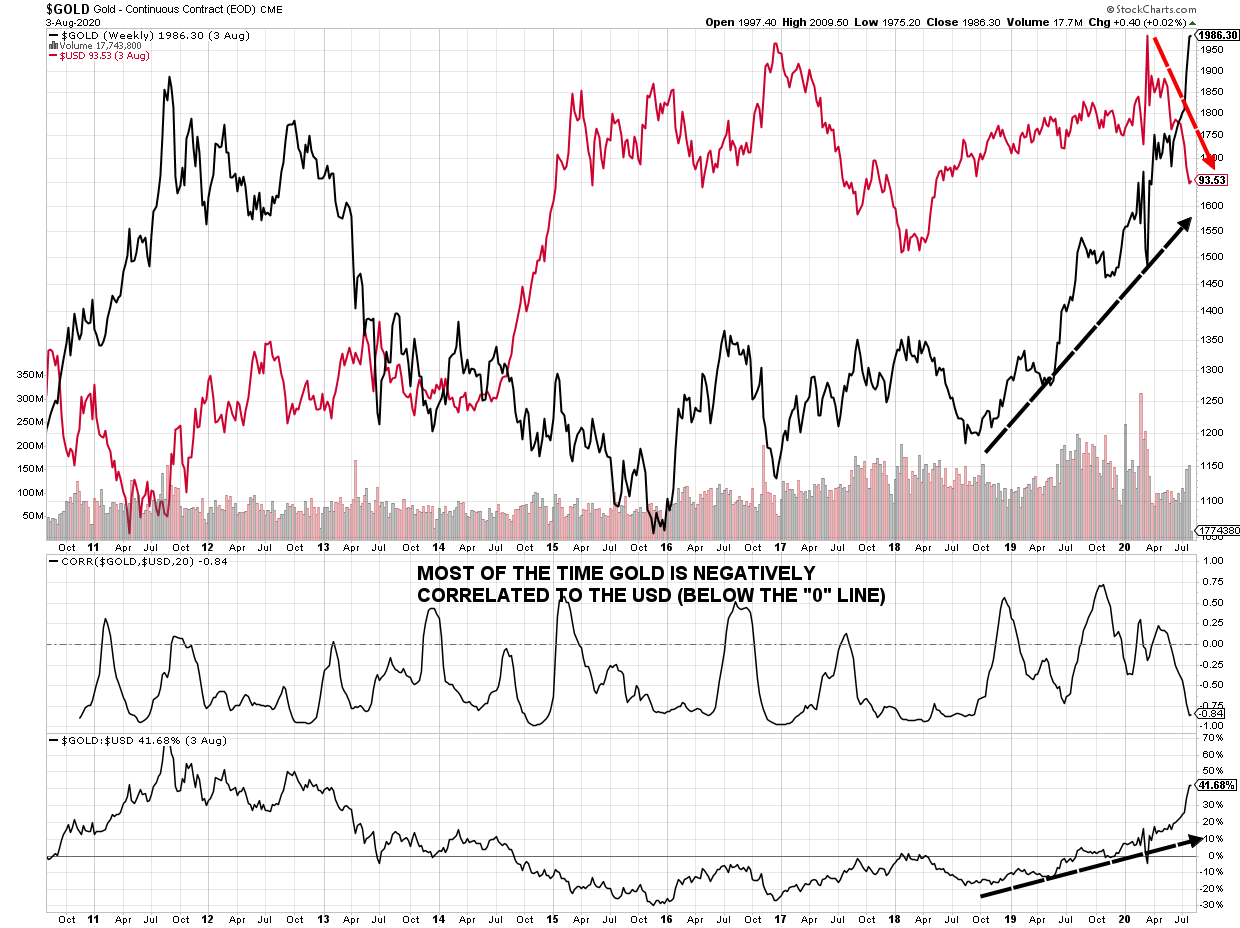 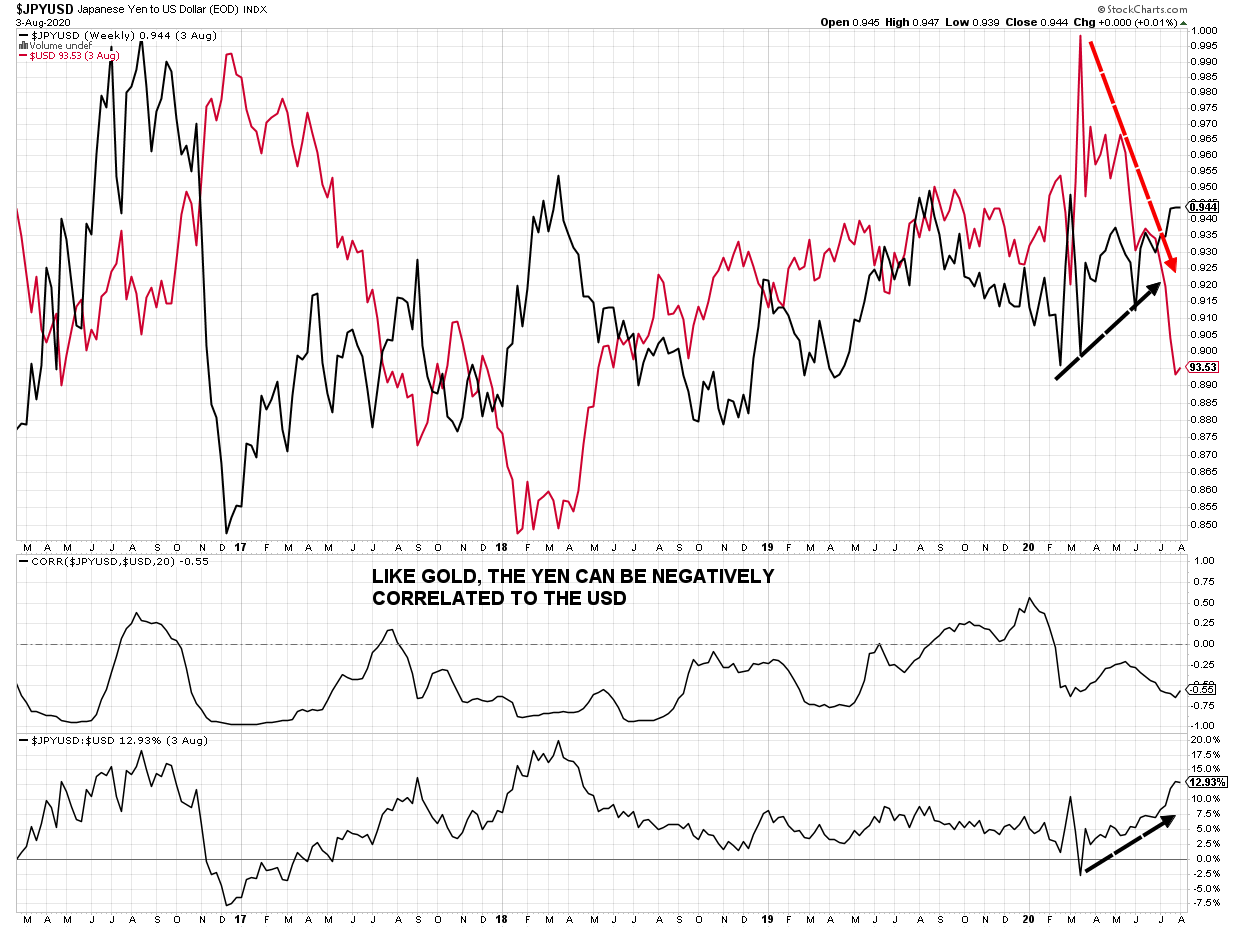 The Investco FXE ETF is a good representation of the Euro/USD relationship. Its been very negatively correlated to the USD. 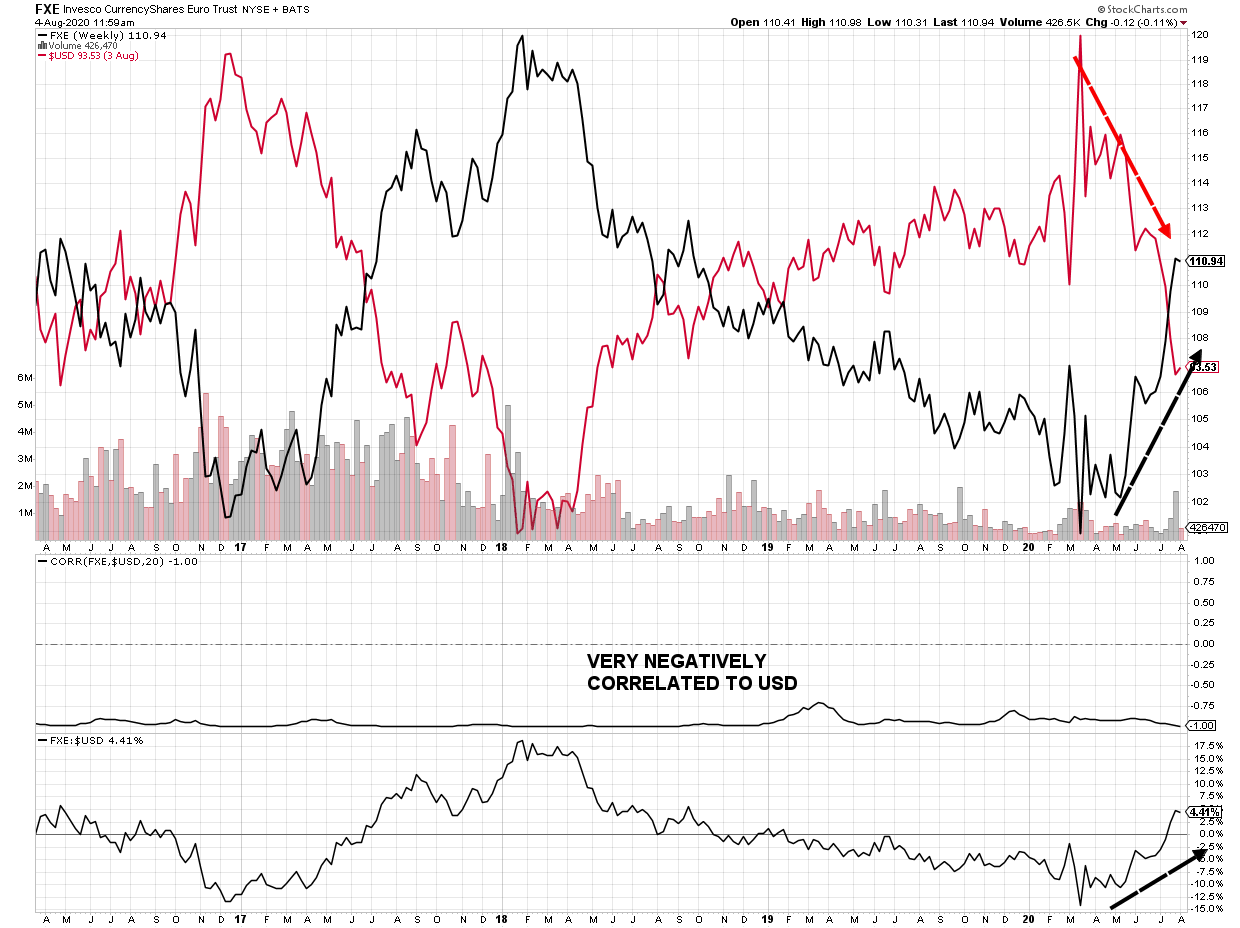 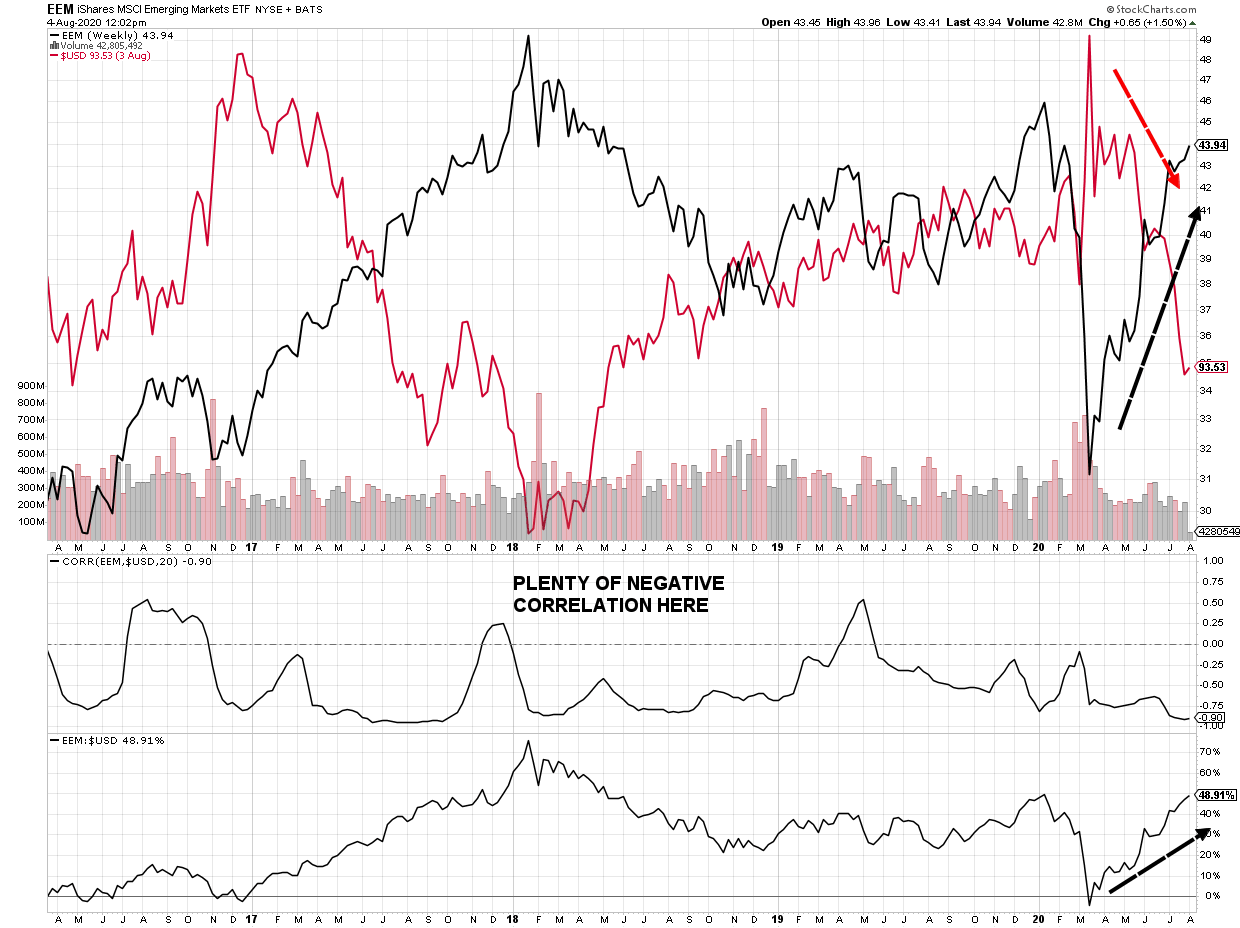 Emerging markets- per the EEM chart above, are showing strong tendencies for negatively correlated movements to the USD. One reason for this relationship is that their economies can be influenced – by commodity prices. The recent out performance illustrates that benefit from rising commodity prices (which they can often produce).

Its too much to print all of the charts, but I have also seen negative correlations developing vs. the USD between base metals (XME-US), Agriculture (MOS-US) and others.

Conclusion: Putting our money where our mouths are

If you hold a USD account – its not such a bad thing to hold a smattering of some of the above ideas. Even Canadian dollar accounts might benefit from holding some of these securities. We hold a gold producers ETF, a base metal producer stock, and a fertilizer stock in our Equity Platform. We’ve also been holding the Emerging Markets via two ETF’s, a European equity ETF, and even a Japanese stock. We may add more to these areas in the future.