Home / US Bonds may be a contrarian play

US Bonds may be a contrarian play

Contrarian investing is the easiest investment strategy in hindsight, but the hardest one to actually profit by in foresight. After all, you and I are hardwired – through a center in our brains known as the limbic system – to run with the crowd. Following the crowd isn’t such a bad thing when it comes to survival of a species. Herds of animals increase survival odds against carnivores by running together, and people avoid fatal mistakes by running out of a burning building with the crowd – rather than into it just to be contrarian. Evolution has driven herding characteristics deep into our survival mechanisms – and I’ve covered this many times in my past blogs (such as here) and my book Sideways. Herding can even help us profit by buying into a good stock trend. At ValueTrend, we hold trending stocks like Google, with little regret for following the herd.

However, there are points where we should avoid buying into an overzealous herd behavior. Recent examples of losses driven by overzealous herd mentality include the tech bubble of the late 1990’s and the oil & real estate bubble of 10 years ago. I’ve argued that the stock market might currently be in a mini-bubble right now and that Canadian real estate might be in a fully-fledged bubble as well

Contrarian investing can also offer us opportunity to purchase stocks and sectors that the crowd has dismissed. But its easier to talk about fighting that hardwired herding behavior and step boldly into an out of favor stock or sector. That’s where having a few technical analysis tools can help calm your instinct to run with the crowd, and take a logical look at the situation. A recent example of this strategy for ValueTrend was the short termed selloff on tech stocks after the Trump election. We bought a couple of tech stocks that were still on trend, but had fallen aggressively after the Trump election. Some of our momentum and sentiment studies suggested that, despite crowd paranoia, we should buy into the weakness. It’s been a good decision so far.

Bonds are potentially setting up as a contrarian buy

Take a look at the TLT (20 year) US bond chart below. Note the strong uptrend, the current test of that trend, and the support by the 200 day MA (red line). If the TLT can hold this line, and bounce off of it, that would be technically bullish.

Now let’s look at a sentiment indicator for the 10 year bond (the results of which are identical for the 20 year bond). This is a compilation of sentiment indicators put out by our friends at sentimentrader. The indicator incorporates smart/dumb money flow, sentiment studies, put/call ratio, and commitment of traders data. Note that when sentiment – via this compilation – gets well below the horizontal green line, it typically suggests a rally is overdue. Some are bigger than others, but you do seem to get some bump-up on the trade – even if it’s a short one. So perhaps we are seeing an indicator that the promised rate rise in treasuries next month is baked in, and perhaps over-baked into the price of US treasuries. If so, could this be setting up for a contrarian play for a bounce? 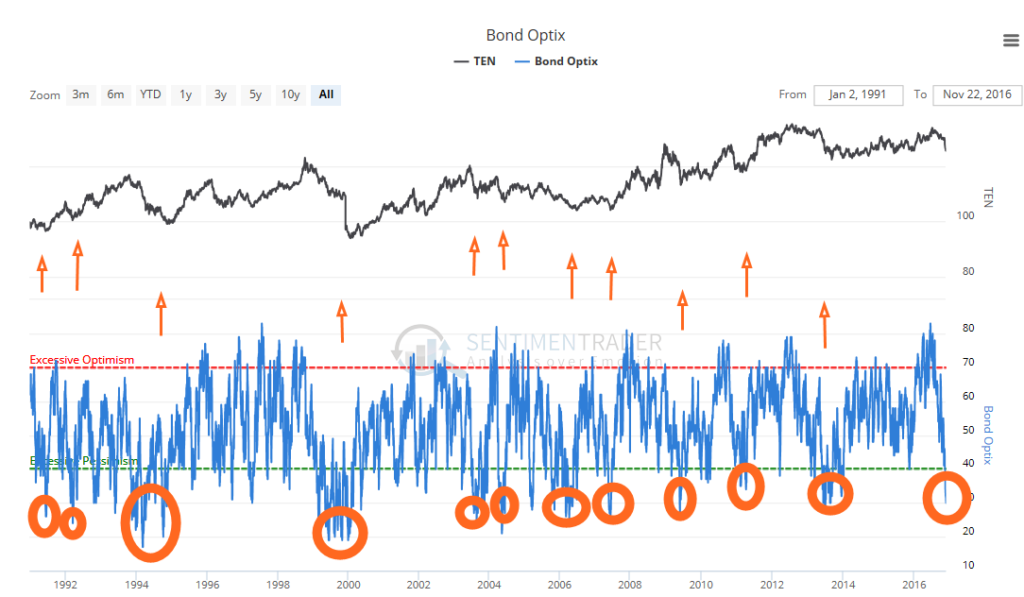 I don’t hold a position in this trade at this time, but I am musing on the decision. You might want to think about it too. Don’t forget to leave a comment below if you have thoughts on the subject – this is, after all, a learning community blog. No question or observation is dumb.