Yesterday, I bought my first tranche of gold for the portfolios I manage. Support on gold lies at $1550. I bought as it touched just above that with a limit order I’ve had in the system for a while. I will buy a second tranche if, and only if, it breaks $1620. An upside break through $1620 would break short termed resistance and the trendline of the current right-angled triangle – see chart above.

As mentioned in my June 27th blog (https://www.valuetrend.ca/?p=1293), upside breakouts of right angled triangles can be quite bullish. The formation does have a slight bias towards breaking their support lines (right angled triangles break support 55% of the time, and tops 45% of the time according to Bulkowski’s book, Encyclopedia of Chart Patterns). But at only 55% bearish potential, results are too close to random to make bearish assumptions (take a look at BCE for a recent right-angled triangle bullish breakout). Further, gold does move into its seasonal pattern of outperformance in July.

I normally refer to the US markets when analyzing indices. The S&P TSX 300 composite has an enormous bias towards three sectors (roughly 32% financials, 25% energy, 18% materials) . Those 3 sectors represent some 75% of the TSX 300 composite index!  Thus, the movements of the broader market is not necessarily reflected in that cap-weighted index. Nonetheless, the TSX 300 is the benchmark most of us watch. I decided to post a technical review of the TSX after a Bloomberg reporter interviewed me yesterday regarding my outlook for the TSX. So here’s my take:

The TSX has been trending down since early 2011, as seen on the chart above. On the short termed chart (below), it’s been trying to base with support at 11,250 or so. Its below its 200 and 50 day MA’s, and despite recent bearish movements is not oversold by traditional momentum indicator readings. MACD is crossing over bearishly, but RSI is signaling a potential short termed upside move – its not oversold but it is crossing up through the mid-point. Relative strength vs. the S&P 500 has been trending up since June, but has been underperforming the S&P 500 since early 2011. Lots of big solid candles in recent days—another sign of the times.

I’m a little concerned about the expanding pattern that has been in place since May. Expanding patterns are usually symmetrical, but not always. The current pattern shows higher highs but equal lows at the 11,250 support level. All in, the TSX could bounce in the near term, but the bigger picture is bearish. A break through 12,000 with volume on the upside would indicate a reversal of the bearish trend. A break below 11,250 would be bearish. 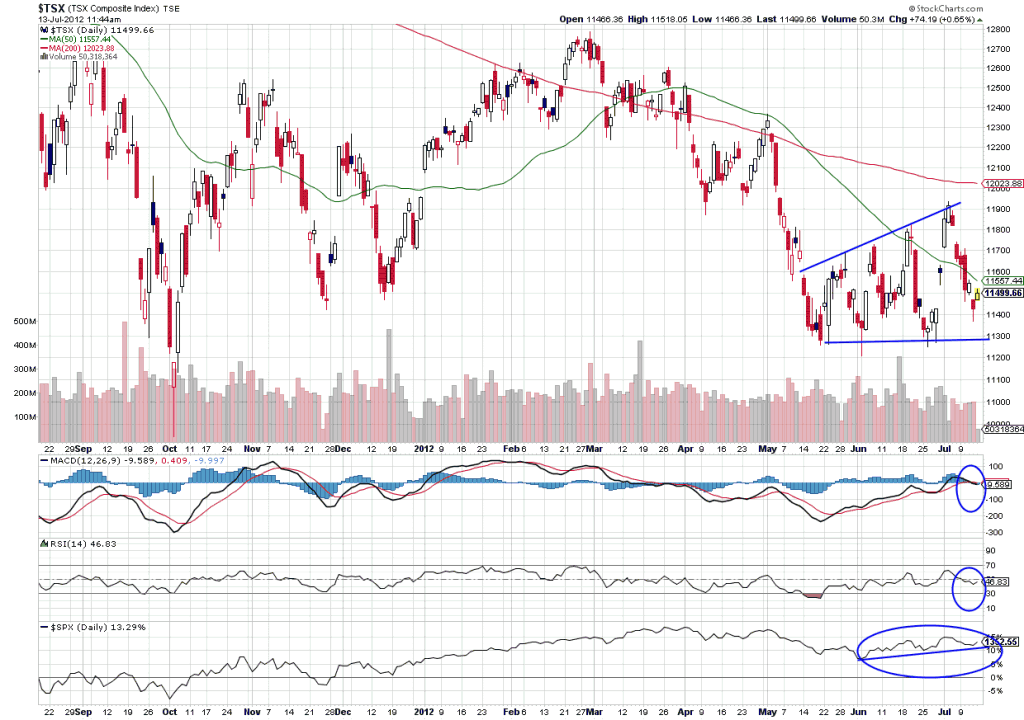