Home / Trapped in a box

Trapped in a box 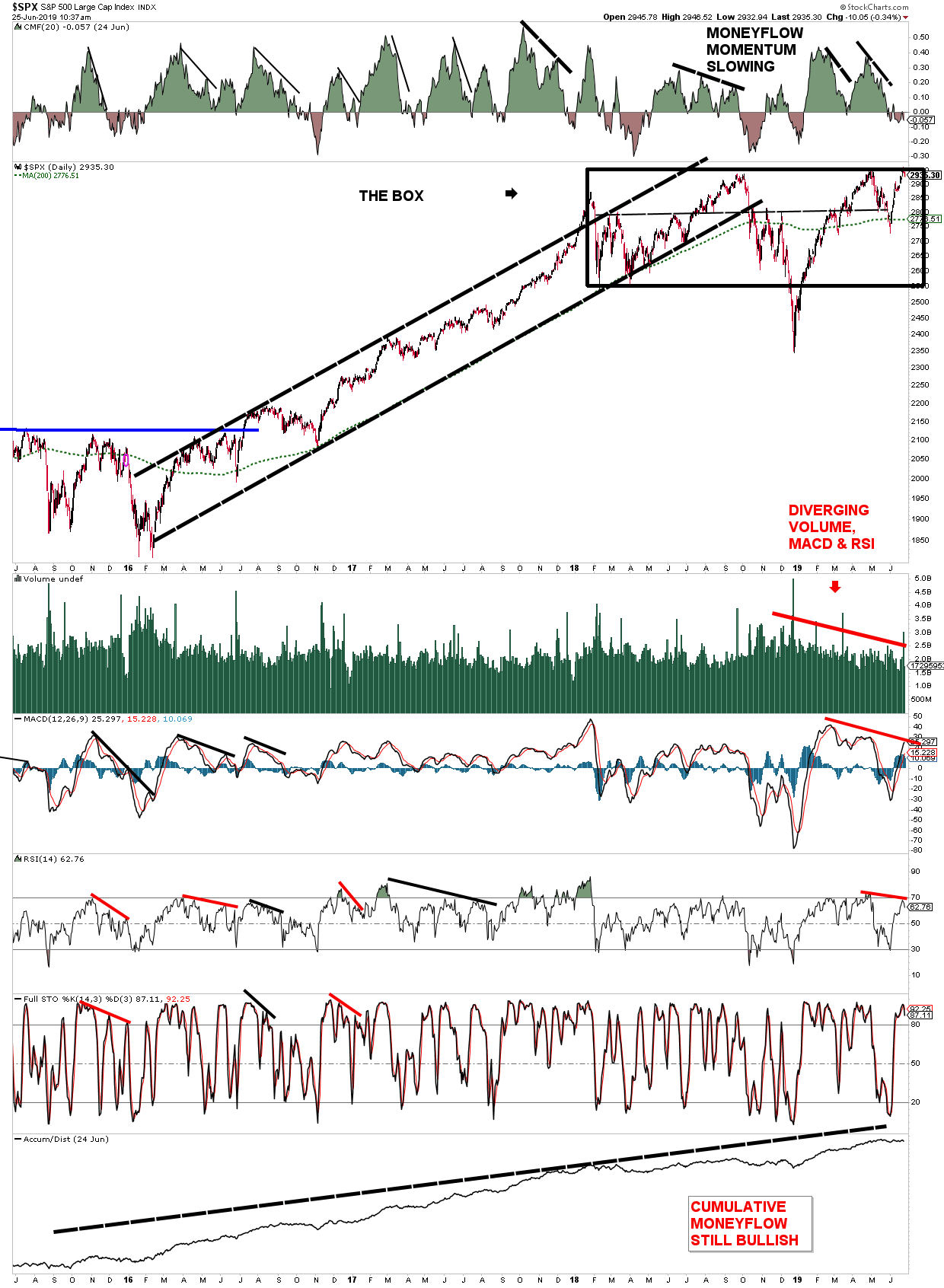 So too is the TSX as it struggles to blow through the mid 16,000’s. Both indices show an amazing commonality of divergences between the return to these old high points, and the failure of key technical indicators to confirm those highs. 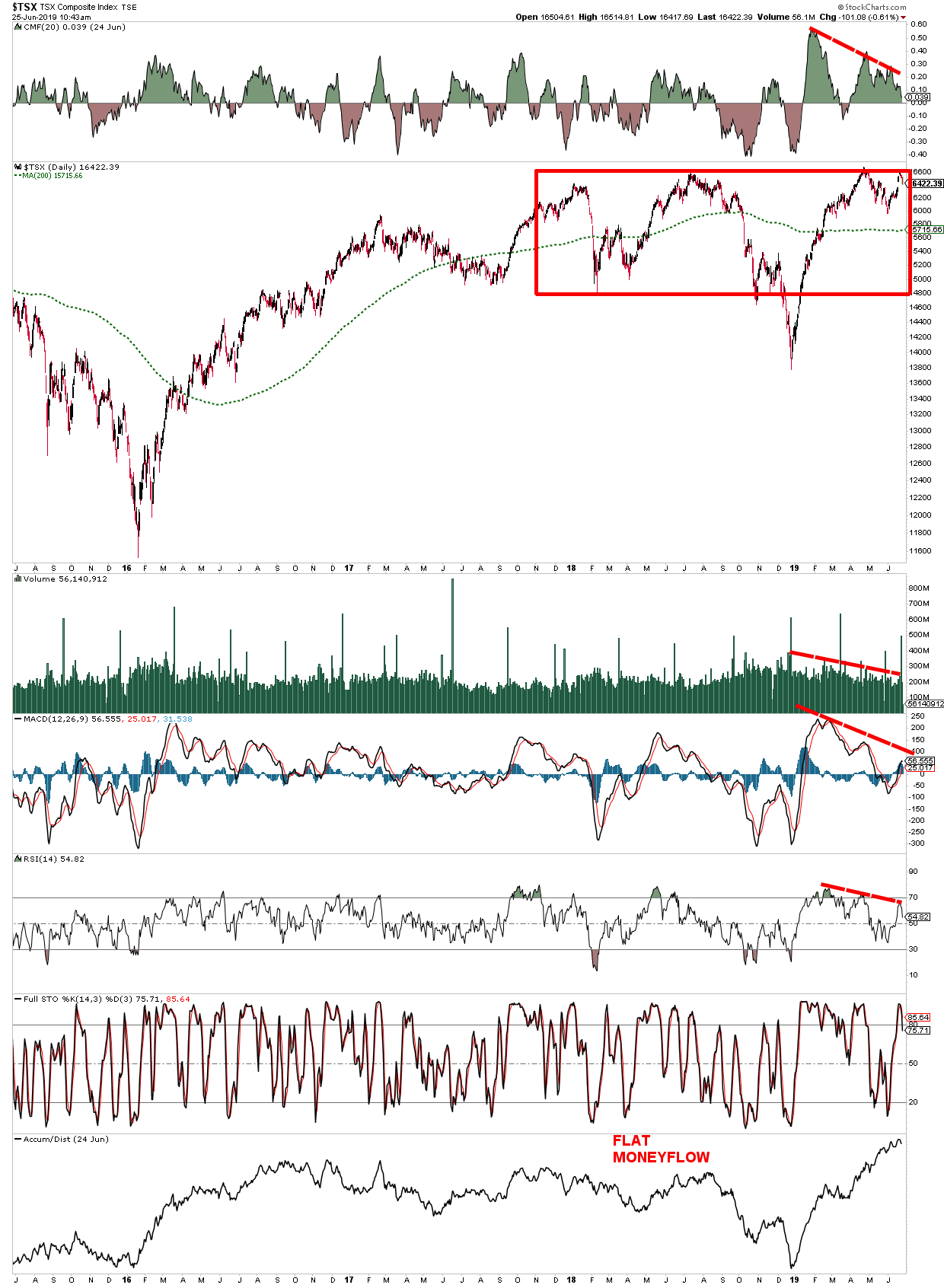 Volume should confirm the movement

For example, volume has been noticeably declining though the rally on the SPX as it drove into the 2950+ zone. Meanwhile, the TSX showed slightly weakening volume, albeit not as significantly divergent as that of the SPX. True…volume is almost always lower during summer months. So I might forgive the pattern of TSX volume. But the SPX volume  is – without question – declining in lock step with rising prices. That’s not a good thing. Technical analysis suggests that volume should confirm the trend. In the SPX’s case – it certainly has not done so.

There are about a zillion momentum studies out there. I’ve covered many of them in my book Sideways. I always encourage new students of Technical Analysis to become comfortable with just a few of these indicators, and learn to use them properly. This leads to less confusion. For my own needs, I use just three studies. MACD is the longer termed momentum indicator (weeks to months in perspective) on my list, while RSI is more of a mid-termed momentum indicator (1 week to a month for its signals).  Both of these indicators are diverging right now—meaning that they were moving down while the SPX and the TSX moved up. That’s not good. It tells us, despite the rising prices – the enthusiasm for those rising prices is dwindling.

Stochastics is the third momentum study I follow. It’s as whippy as a hummingbird’s flight pattern. But it does give pretty sharp turn indications –even if they are only short termed (days) in nature. Stochastics is moving from an overbought position and hooking down. No surprise, given the test of these two indices at their old highs. So too is moneyflow momentum- which is seen on the top panes of both charts. It’s a very short termed indicator- it looks at the velocity of moneyflow (price/volume combined). Typically a negative divergence in moneyflow momentum, like we have now, results in a corrective move of some sort. Again – backing the validity of that ceiling on both indices.

Long termed moneyflow (bottom pane Accum/Dist line) is rising for the SPX. Not so much for the TSX. Actually, the TSX cumulative moneyflow looks as erratic as all get-out. Hard to call that bullish at any point along the chart.  Whatever the case – the SPX’s rising cumulative moneyflow certainly backs the case for a continuation of the bull market sooner or later. It tells us that the ceiling of the box will likely eventually break to the upside. This, despite the strong evidence for another neartermed pullback within the box at this juncture.

All in, I’m looking for a tradeable correction over the coming days or few weeks. From there, I’d expect yet another run at the old highs. The timing on when the box will be broken to the upside is hard to pinpoint – but it might not be so surprising to see that happen as the end of the seasonal weak months (May-October) come to a close. Or earlier. We shall see.