Home / Trading within the eye of the storm

Last week saw gold and the stock market move up strongly. Some may wonder if this means that the market has bottomed, and if the bull has returned.  A few factors to look at will be discussed today in order to surmise that potential. And some strategies that I am looking at.

SPX chart suggests a rally within a bear market

Until proven otherwise, the recent rally must be considered just that: a rally within a bear market. That can change.

Each of these steps will inspire me to place more cash into the market. One-step-at-a-time!!

In the near-term – we have reason to believe that the rally might carry on until it finds resistance at one of the above noted levels. Apologies for the condensed chart–lots of indicators to show you. First, Moneyflow momentum (top pane) is bullishly diverging. So is MACD (second pane from the bottom). Meanwhile, Stochastics and RSI are moving up yet not overbought. These all suggest more upside. However – a flat AD (cumulative moneyflow, bottom pane) argues that the market is still weak.

More important than those indicators are the moving averages and peak/trough trend observations: I suspect the 200 day (4060) market will break. Whether that is a spike, or the real McCoy will only be known IF and only IF the last peak of 4300 is taken out. Its my suspicion that we will test that 4300 level by year end. Will it fail?  Who knows? But if it is not taken out with a new high, it is likely such a failure will be followed by another leg down. 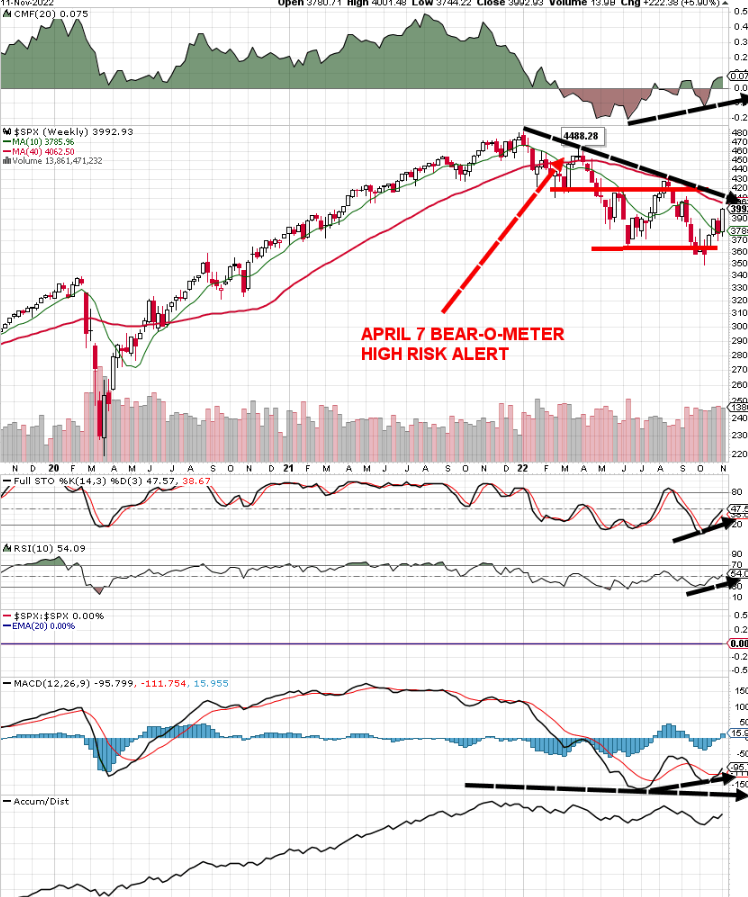 The recently announced  lower-than-expected CPI number in the USA was a surprise. That said – the previous three months had seen inflation begin to moderate as you will note on the chart below, courtesy statista.com. In October, the market had expected at least an 8.0% gain year-over-year. Instead, they got 7.7%. The chart below (www.satista.com) doesn’t show the report from last week, but you can see the trend. This surprise fueled the rally last week. The initial takeaway – the worst inflation pressures have passed. The Fed’s aggressive rate hikes are starting to work as intended, and structural inflationary drivers caused by the pandemic are improving. Easing inflation is a positive development, and markets wasted no time in forging ahead.

I have noted in the past – we anticipate inflation leveling off – but not to the 2% level the Fed (and BOC) want. As such, growth stocks relying on high profits from leverage to low rates will not be as profitable. You’ve already read the headlines regarding the major tech sector player layoffs. They know the scoop. Lower CPI is good news. Higher CPI over the coming year, once the rate settles – perhaps not so good for growth stocks. 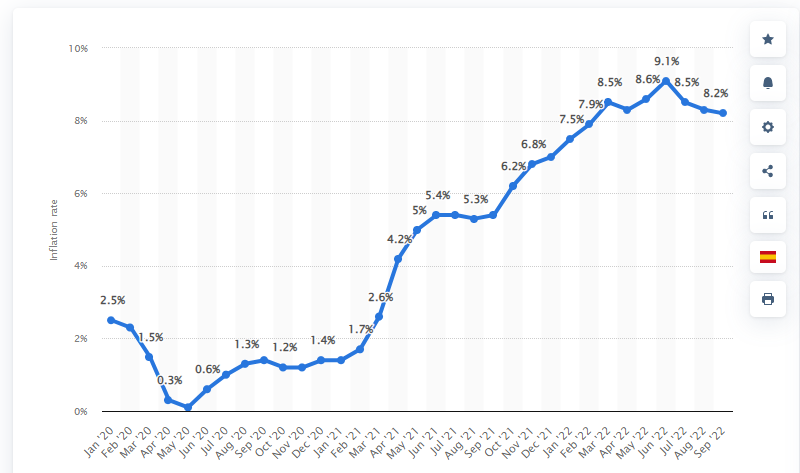 Inverted yield curve – what it means

The chart below shows us that the US yield curve has gone negative/ inverted. That is, short termed (3 month treasury bills – red line) are now yielding higher than 30 year treasury bonds (black line) . An inverted yield curve, if sustained for more than a brief interlude, can imply a recession. I recall back in 2006, the spread between bills and bonds  inverted for much of the year. Long-term Treasury bonds went on to outperform stocks during 2007.  The economy moved into a recession, and the market into a bear in 2008. This time, the market, which tends to move much faster these days, has already moved into a bear. Recession looks to be following.

Should the curve remain inverted much longer (it has only just inverted) – its a strong likelihood that recession is upon us. Again, look to long bonds as an opportunistic play if that happens. Please refer to this blog where I discussed how to identify if and when to consider an entry into long bonds.

There is no doubt about it – the majority of 2022 was a Category 5 hurricane, EF-5 tornado, or whatever you want to call it for the markets. The markets are now in the eye of the storm, aka: a period of relative calm within rough weather. Perhaps we will emerge from the storm unscathed. Or not. My thoughts are that the current calm weather rally may carry into year end or early January.

Again, my targets range between 4060 (200 day SMA) and the last peak (4300) for the SPX.  However, should we stall at one of these resistance points (SPX), we may see a period where trading remains range-bound and choppy as bulls and bears battle over the market narrative and direction. From there, the potential for a final leg down remains fully possible.

Having said that – I continue to endorse the TSX as the superior market to overweight in one’s portfolio – per this blog. Inflation will remain higher than 2% in my very strong opinion. That’s good for commodities, thus good for the TSX. I’m also keeping an eye on a potential opportunity in the long bond – particularly in the US Treasury market – when the charts suggest such potential. Watch the yield curve too – a sustained inversion is a strong signal to buy bonds.