Home / Trading with the odds

Trading with the odds

I’ve been staring at a lot of charts lately. And, I’ve been reading and listening to lots of analysts – coming from both technical and fundamental disciplines. Nobody has “the answer” to what the next 12 months will look like for the stock market. But, I think I have drawn a few conclusions as to the most probable (yet, still very much uncertain) potential outcome might be. Below, I will highlight some comments from a few of them – quoting directly from their research.

COVID-19 headlines appear to be the main driver of the positive tone in the market amid further curve flattening and expectations now shift towards when the economy will reopen. Trump said guidance will soon be provided on relaxing social distancing measures. While the market is enjoying an impressive rebound off of the March 23 low, I’m a firm believer that bottoms take time to form and that a v-shape recovery is not the probable path toward to a new bull market. As the US economy attempts to reopen will this be the “sell the news” moment that sees the market retrace it’s 20%+ gain and we make further progress in the bottoming process? I think there are high expectations that things will just return to normal, but behavioral changes will continue to weigh on economy activity until there is a vaccine. Unfortunately, reopening the economy will not be as simple as flicking a switch. See NYT article Economic Pain Will Persist Long After Lockdown Ends .

Larry looks at the 4 phases of a bear market, and presents where he thinks we are right now:

In a time like right now, it’s easy to find both bullish and bearish factors for stocks over the next 12 months. Truth is, no one knows where stocks will be 12 months later given the unprecedented challenges the global economy faces. If the government’s actions are enough to stop further economic deterioration, then stocks will probably be significantly higher in 12 months. If the economic recession worsens and more defaults are triggered, then it’s highly likely that stocks will be lower in 12 months. To pretend to have a crystal ball as to where the world will be in 12 months is, in my opinion, plainly dishonest. One can only speak in terms of probability – there is no certainty.

The biggest mitigating factor – and it’s been a factor for two weeks now – is the overwhelming thrust in buying pressure. Even if markets are being driven by algorithms making breath data less reliable, until these measures fail consistently they deserve attention. And nothing is screaming louder than these repeated days with huge buying interest. The short-term outlook is increasingly cloudy given the recoveries in so many indicators, but it’s suggesting more and more that longer-term returns should be positive. 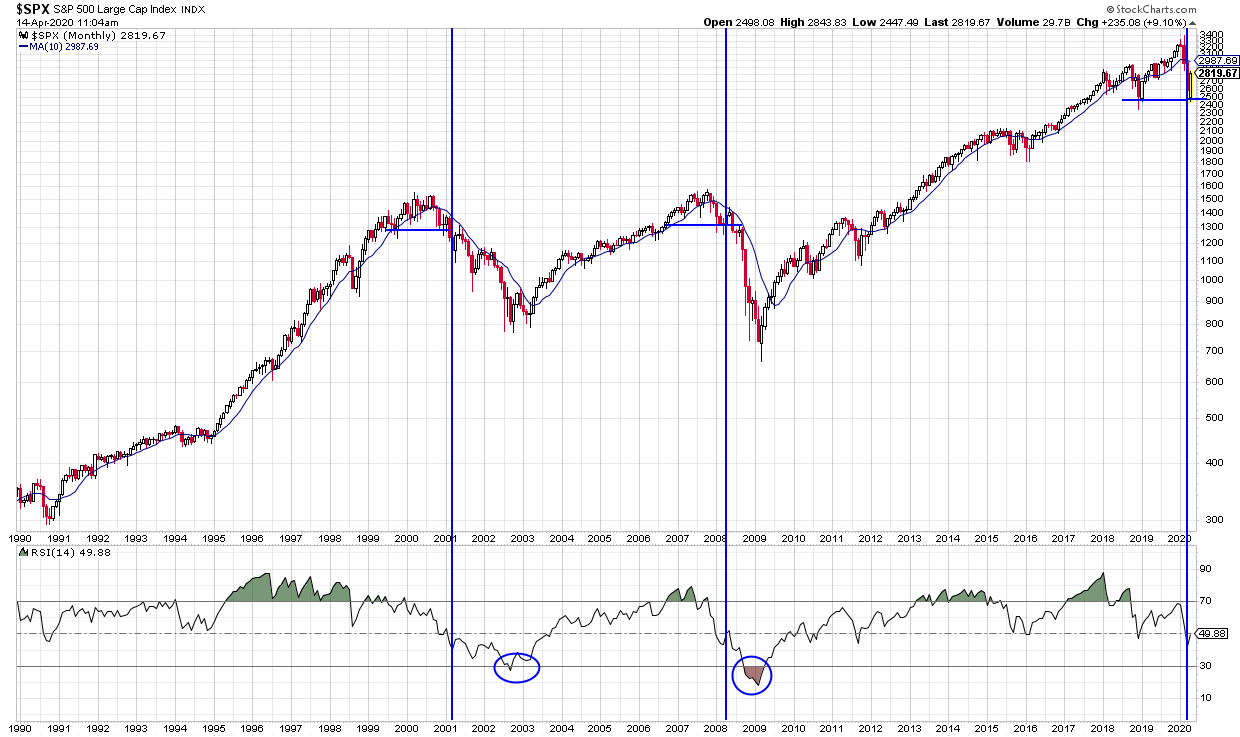 We sold a chunk of Equity into last weeks strength. We’re up to 30% cash in the equity model from the prior level of 15%, and a bit more than that in the aggressive model. We still hold about 5% in oil stocks, and now that the (somewhat disappointing) OPEC deal is known, its really just a question of how much longer we hold it. We will likely rotate that into a more attractive position from our oil stocks in the near term. Other than that, we are comfortable where we sit at this moment with most of our stocks–with the odd rotation in & out of stocks being done here and there.

We do not know if  the current rally is only a counter rally with a final selloff (not necessarily to a lower level).  But, I have reviewed enough market selloffs to conclude that one-and-done selloffs are rare. On the chart above, I note similar setups though the 2001 and 2008 selloffs as we have now. That is, a rally off of support where RSI had fallen below the “50” line–noted by my vertical lines. A hook up on RSI from 50, and then a final washout that drove RSI into its official “oversold” zone below 30–circled.

So, the odds are for a bit of profit taking soon, pushing the market down to some lower level than today– all things being equal. Still, I cant discount the potential for a V-shaped recovery. After all, we have an historic Fed stimulus program in the background, which truly supports the bull case. It may not be an “all things being equal” situation. I also note the % stocks >SPX 200 day SMA is now moving over 15%-a bullish sign-discussed in my last blog. So I’ll not go much lower than the 30% cash we currently hold.

We do know this: The virus will cause a severe economic contraction and a sharp decline in corporate earnings in 2020. What remains unknown is the extent of the damage, and how fast the economy will recover. The stock market is a forward-looking beast. The current situation is NOT what the market is pricing in–the rally of late is pricing in a better economy in the next 12 months. Perhaps this article from MarketWatch might help those who like to use PE ratios determine where the market might land in the next 12 months. To me, the verdict is out as to whether we really do see a meaningful earnings rally in 2021 after we get through the disaster that is 2020.

I’ll hold some cash while remaining 70% invested for the time being.