Home / Trading views for the NASDAQ

Trading views for the NASDAQ 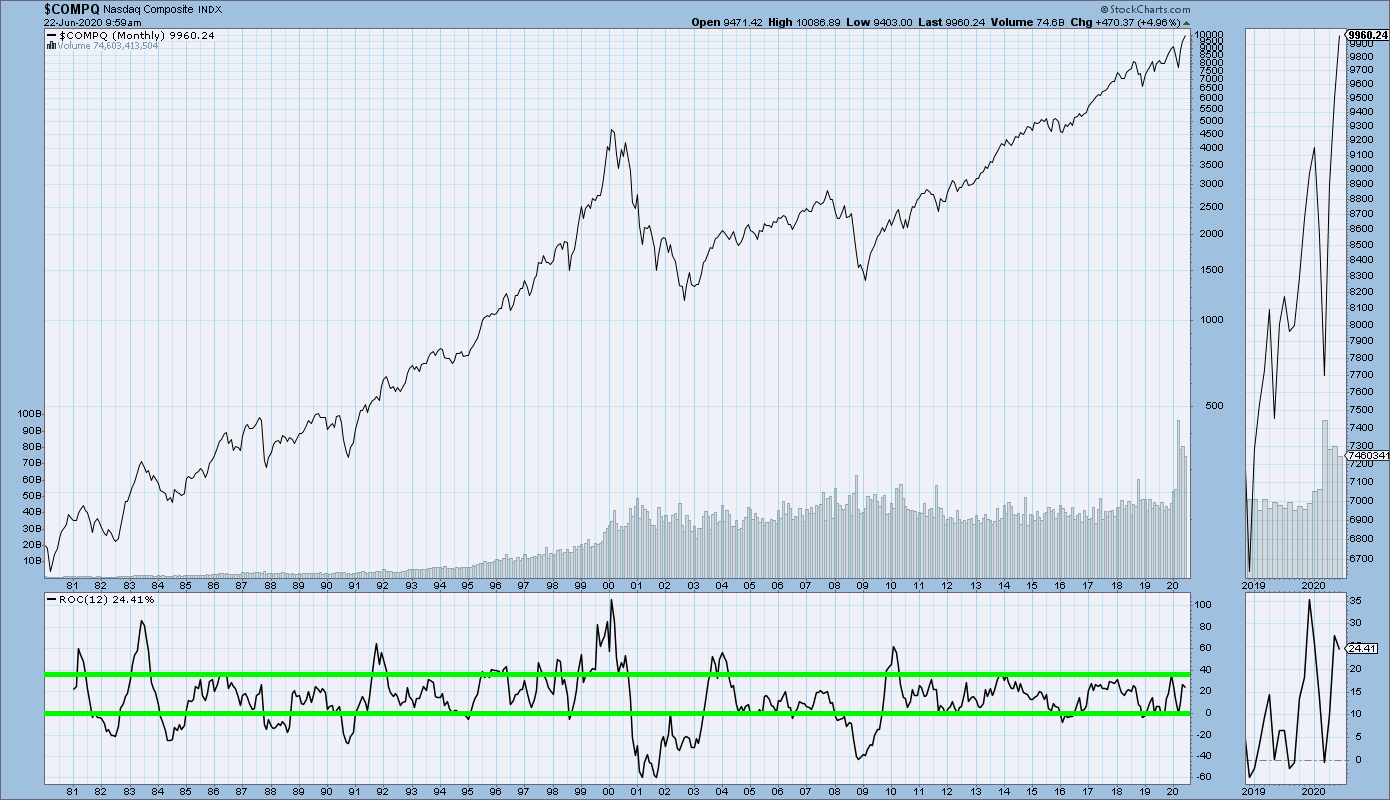 Above is a monthly chart of the NASDAQ, with the simple Rate of Change indicator below it. The chart goes back to 1980, so it provides a decent historical perspective. ROC is a simple momentum indicator.It simply measures the percent change in price from one period to the next – this one being a 12 month (one year) change.  The longer look back period takes out most of the intern swings that occur within a given year. It tends to stay above the “0” line most of the time. The exceptions were in the early 1980’s, 1990’s, 2001’s tech crash (which was the biggest negative move for that index) and 2009. Note that a standard oscillator might measure proportionate overbought/ oversold zones. For example, RSI is often measured as 70/30. The ROC for this chart suggests extremes over 40, and below 0.

The current ROC measurement on the monthly chart suggests that the NASDAQ has not violated this 0-40% zone for the past decade. Interestingly, the ROC signaled a “buy” in 2009, and a “sell” in 2010. But nothing much since. Sure, its moved to the extremes of my horizontal zone lines–like in January of this year where it was at the high end (somewhat overbought) and March when it hit the low end (somewhat oversold). But nothing really too dramatic.

What I am drawing from this very concentrated, not too in depth study of one single indicator, is that the NASDAQ is probably not yet setting up for a major crash. True, its 12-month ROC is near the top of my horizontal bars. Thus, it may correct sometime this summer or fall. But its not set up for a 2000 crash according to this single study. This study backs the longer termed trend, which you might observe is clearly in an uptrend. In fact, the higher highs of late suggest that it may indeed be in a better place than the broader SPX, which is struggling below its February highs.

The longer view looks bullish for the NAZ, but a closer look shows us that it may indeed be setting up for a neartermed correction. Note the widening Bollinger Bands – this typically indicates that a change is coming. The index is also close enough to the top band to suggest an overbought situation. Weekly stochastics is looking like it may be ready to cross down and roll over. RSI is not yet above its “70” overbought line, but its getting there. You’ll note that RSI doesn’t always go above 70 to signal a correction. So keep an eye on that 70 level, as it may indicate a turn at a point just under the line. It has in the past. 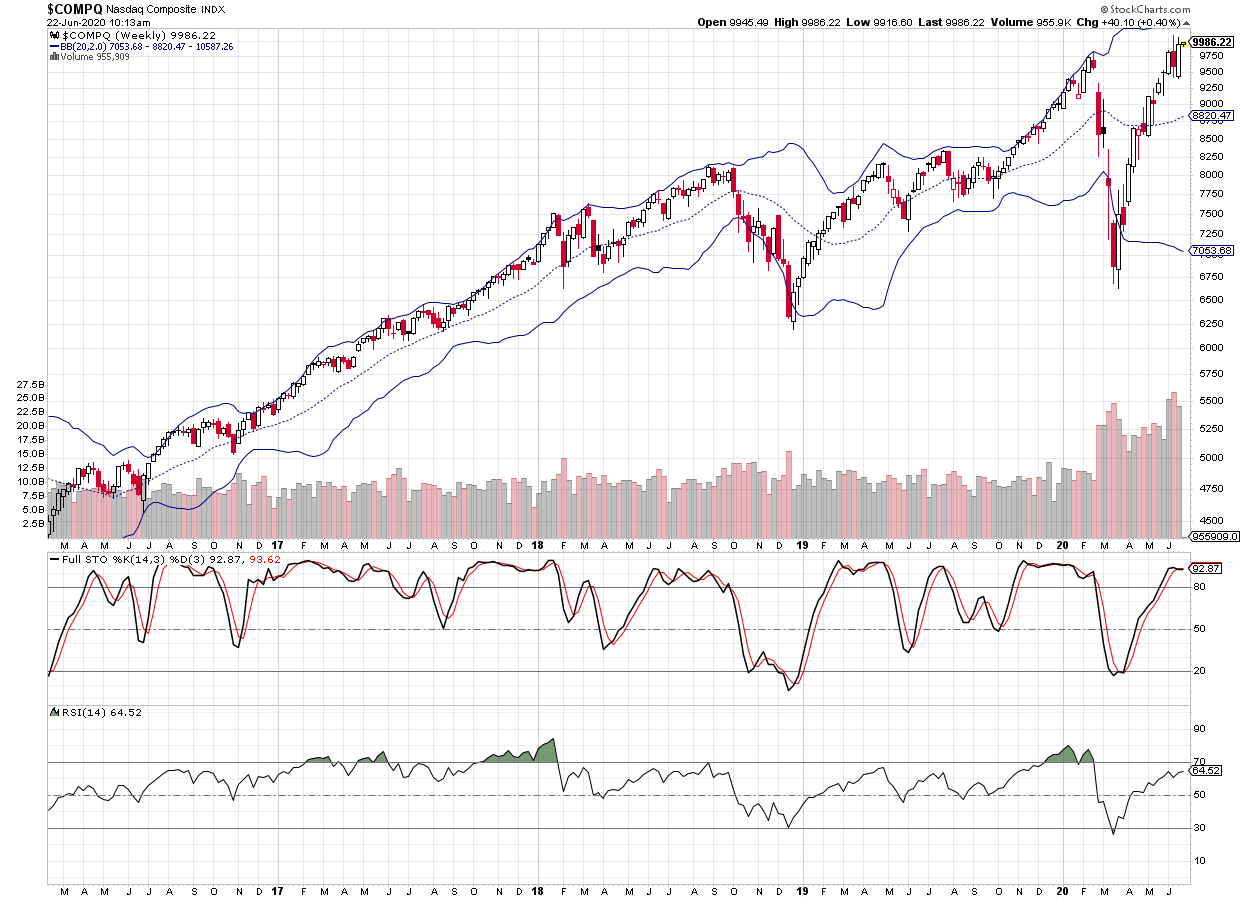 Seasonality for the NASDAQ isn’t often bullish between July and October. This might line up with the final move into an overbought situation noted on the charts above. Perhaps we will see the NAZ hold out well until some point in July…. 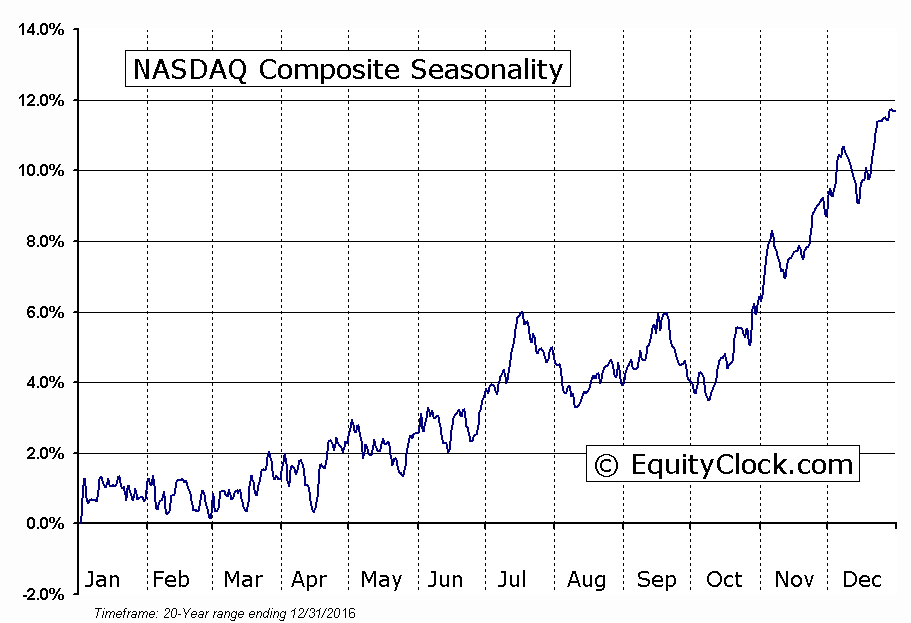 Sentiment approaching, but not yet overbought

I checked the sentiment OPTIX for the NASDAQ.  This is a compilation put together by sentimentrader.com of traditional volatility indicators like Put/Call, VIX and various price behavior models. Its not bad at signalling neartermed moves. But….These moves are not necessarily deep, which is why I’ll pay closer heed to the momentum studies noted above, and of course the chart itself.

Its not at the overly optimistic levels yet–indicated by the horizontal red line at the top. But, like some of the stuff we see in the charts above, its getting there. Chart courtesy of sentimentrader. 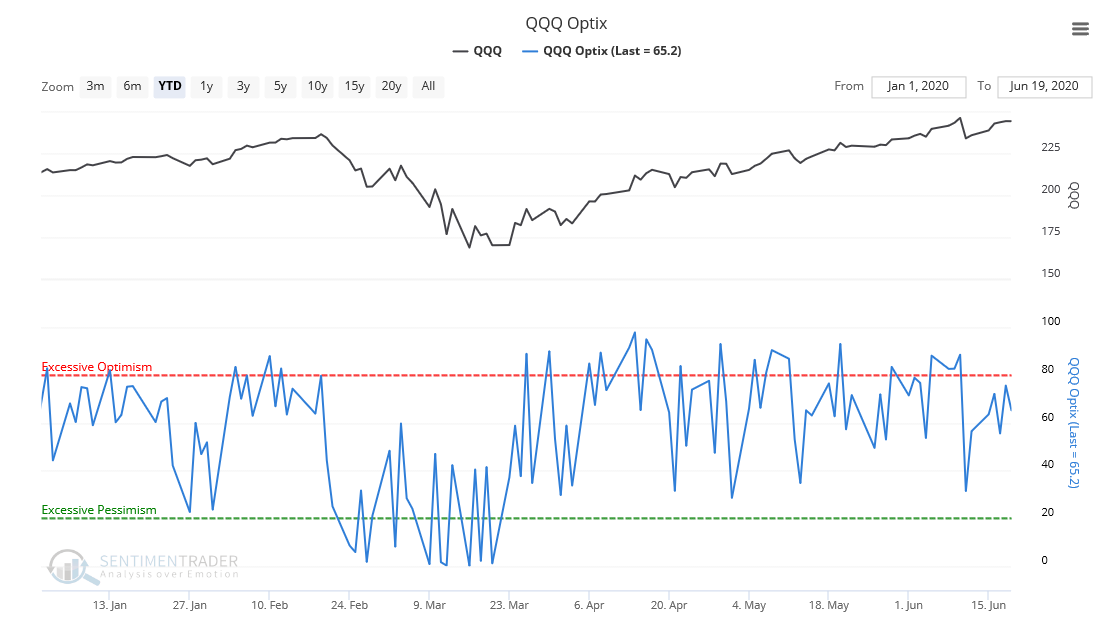 True, there are some wildly overbought, overvalued stocks in the Nasdaq. Amazon at a PE of 140 and a weekly chart RSI of 80 comes to mind, as does Zoom at 180 times earnings and an RSI of 84 on the weekly chart. I mean, come on, people! And true, many of these overbought stocks (like AMZN) are major influences on this index. But we don’t want to throw the baby out with the bath.

Indications are for some corrective action in the coming weeks or months for the NASDAQ, albeit some potential gas left in the tank in the very near term before anything too nasty happens. Such a correction, especially if its deep enough, might prove useful as a way to get into the very bullish longer termed trend of the index, and/or some of the better stocks within that composite.