Time to rotate into value stocks?

I’ve noted in past blogs that market breadth remains poor (concentration of buying in just a few stocks). This market has risen on the back of very few stocks – largely benefiting from the “stay at home” trend. Names in the take out food industry (Chipotle, McDonalds), companies involved with remote access or internet interaction (Google, Adobe, Zoom, Netflix etc) and of course, online shopping (Shopify, Costco, Amazon). So who is buying these names? I’ll give you three guesses and the first two don’t count!

That’s right… retail investors (aka dumb money) are picking these stocks up at an accelerated rate. Below: a chart from Goldman Sachs illustrating small option traders volume as a percentage of total volume on these stocks. 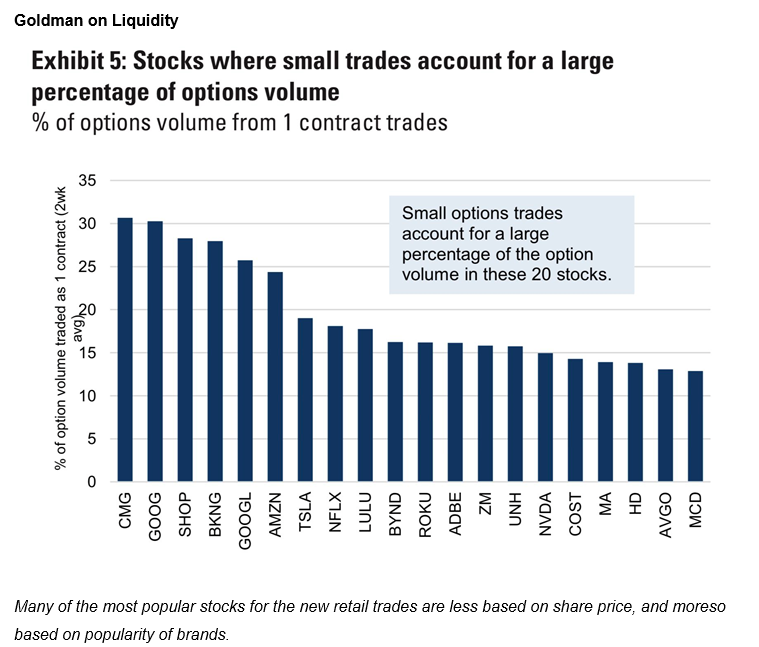 Given the history of “dumb money”, when broad markets or concentrated sectors are being bought enthusiastically by this group, its usually a sign of a top. In this case, its less so a sector play like it was during the 1999 tech bubble or the 2007 energy/ debt bubble. This thematic play is focused on the current social distancing policies. True, within every theme, there is some truth to it. Who can deny that the internet and technology growth theme of the late 1990’s wasn’t accurate? The NASDAQ (where these names tend to be concentrated) rose to all time highs in that move.

Also true was the increasing worldwide usage of energy predicted when investors bid oil itself, and energy producers to record highs by the spring of 2008.

So I won’t deny that the landscape has changed for retail shopping towards online. I won’t ignore the likelihood that more companies will promote working at home by employees. And this benefits the stocks that are involved in that evolution. However, you will note that while the themes of increased technology usage (late 1990’s) and increased energy consumption (2006-2008) turned out to be true, the stock market overbid and overvalued the stocks that might benefit from these developments.

Here’s a chart from sentimentrader.com showing their “crude oil optix” which is a collection of sentiment indicators on that commodity. Note the enthusiasm (consistant level over the “overbought” top line) for oil between 2005- 2007. This lead to its peak and eventual crash in 2008. 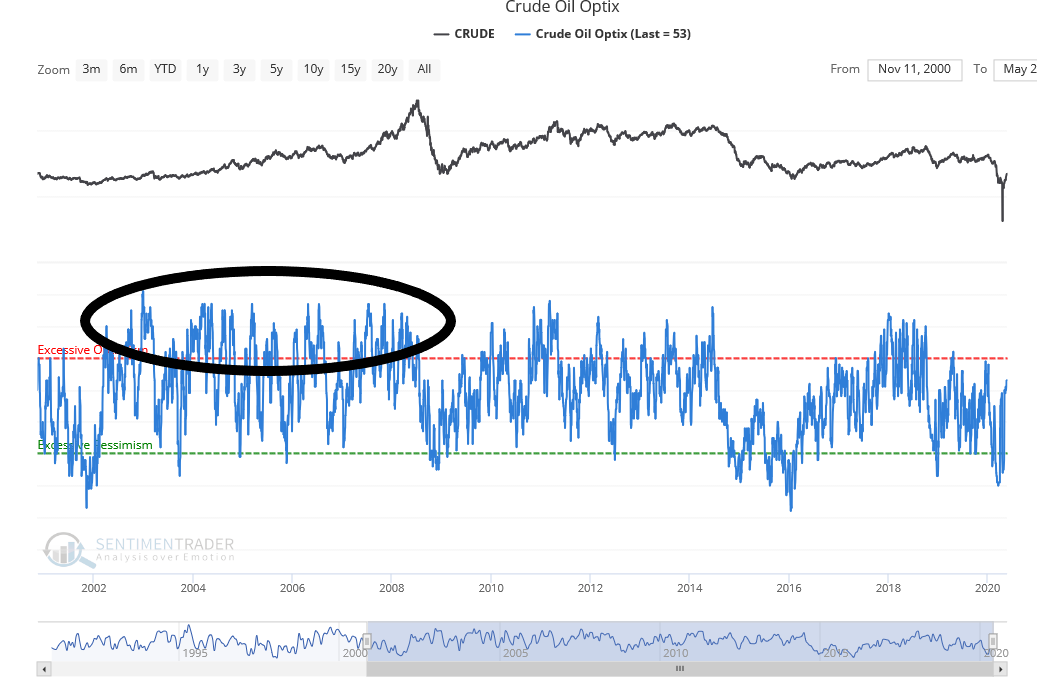 Here is the NASDAQ optix chart from sentimentrader.com. Note again the concentration of positive sentiment (upper line) between 1999 – 2000 leading into that crash. 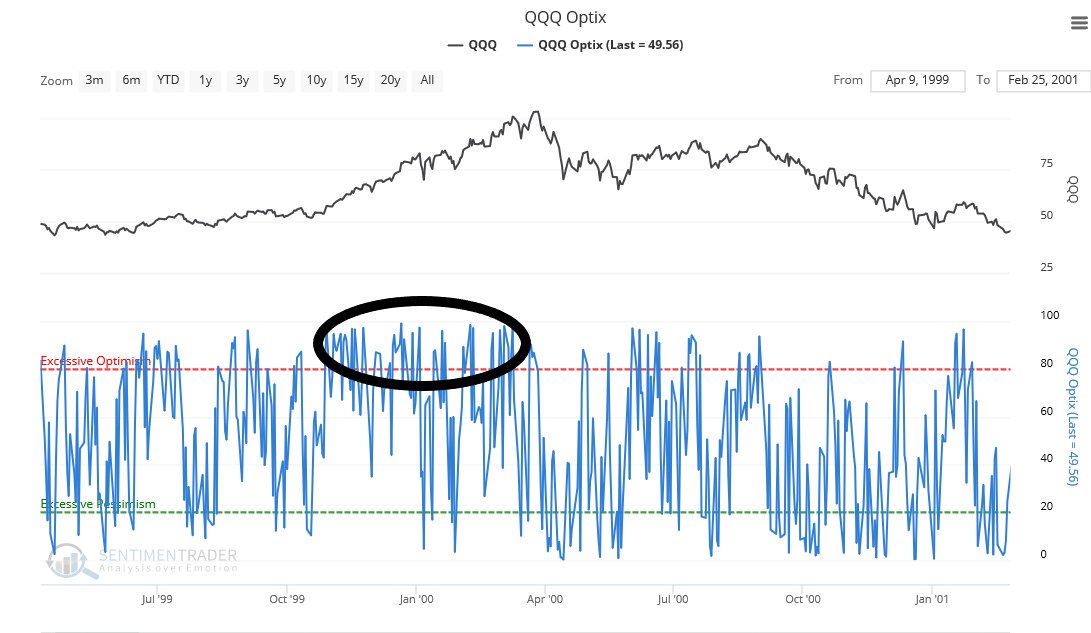 Now lets take a look at where the NASDAQ stands right now from a sentiment point of view. Note that, once again, we have a very high level of positive sentiment. Its hard to pinpoint the NASDAQ as the main index for the stay-at-home economy, but its a start.  As indicated by the volume chart at the top of this blog, we can surmise that much of that bullishness resides in the minds of “dumb money” investors. And that’s never a good thing over the long run. 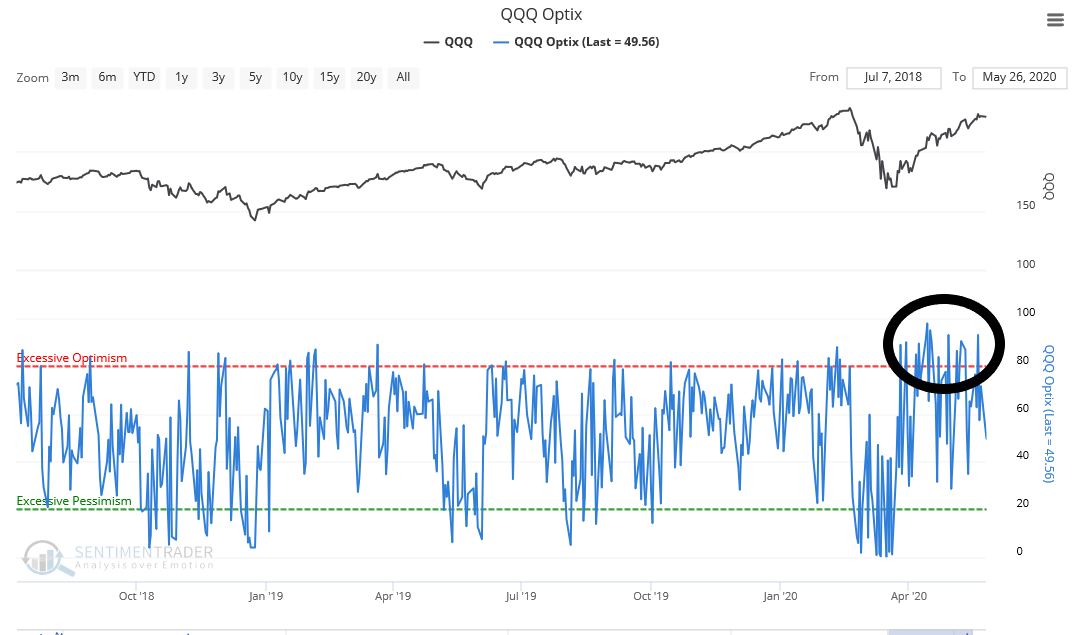 When dumb money is buying the at-home-economy enthusiastically, and broad sentiment becomes overdone for the index containing many of these names, we should take notice. At the very least, we might expect some neartermed rotation out of some of these stocks as the stay-at-home story becomes priced in.

For our part, we are continuing to search for value names with decent balance sheets that may catch the next rotation. I noted three such names here. There are plenty of candidates that fit the “basing” technical profile alongside good balance sheets. Keep an eye open for these opportunities, and consider taking profits on some of the names that might indicate a bit of irrational enthusiasm.

It would be great to hear from some of you on ideas you have been buying or researching. As Red Green used to say…”We’re all in this together”