Home / Time for a pullback

Time for a pullback

The noted calendar date to buy when utilizing the Best Six Months strategy is October 26th, according to Thackray’s Investors Guide. However, that date is merely an average–the actual buy date can vary anywhere around the 26th by several days or even a few weeks. This year, it made sense to allocate some of any cash you held over the summer in the period leading up to the “debt ceiling” deadline. However, there is a good chance that a new buying opportunity will appear in the next week or two.

Technically, there are a few indicators suggesting a near-termed pullback is probable for the US markets before too long. Three that I’ve been watching are:

1. Trend channel top: The market has just breached the top of its up sloping trend channel. Normally, this should be considered bullish – but we need 3 days of confirmation when a formation breakout occurs. Given the next two danger signs I present below, I’m wondering if the channel breakout will hold. This could be a head-fake.

3. Risk-on by notoriously incorrect investors: A few of the “smart $/dumb $” indicators that I watch  are reaching extreme levels –  including a high bullish reading on the latest AAII survey,  high amounts of options speculator trading, and mutual fund inflow readings. Rydex leveraged bullish funds have doubled their inflow over the past week, giving more evidence to the irrational exuberance. Further, NYSE margin is at all-time highs – another Halloween-style scary contrarian sign for the markets. 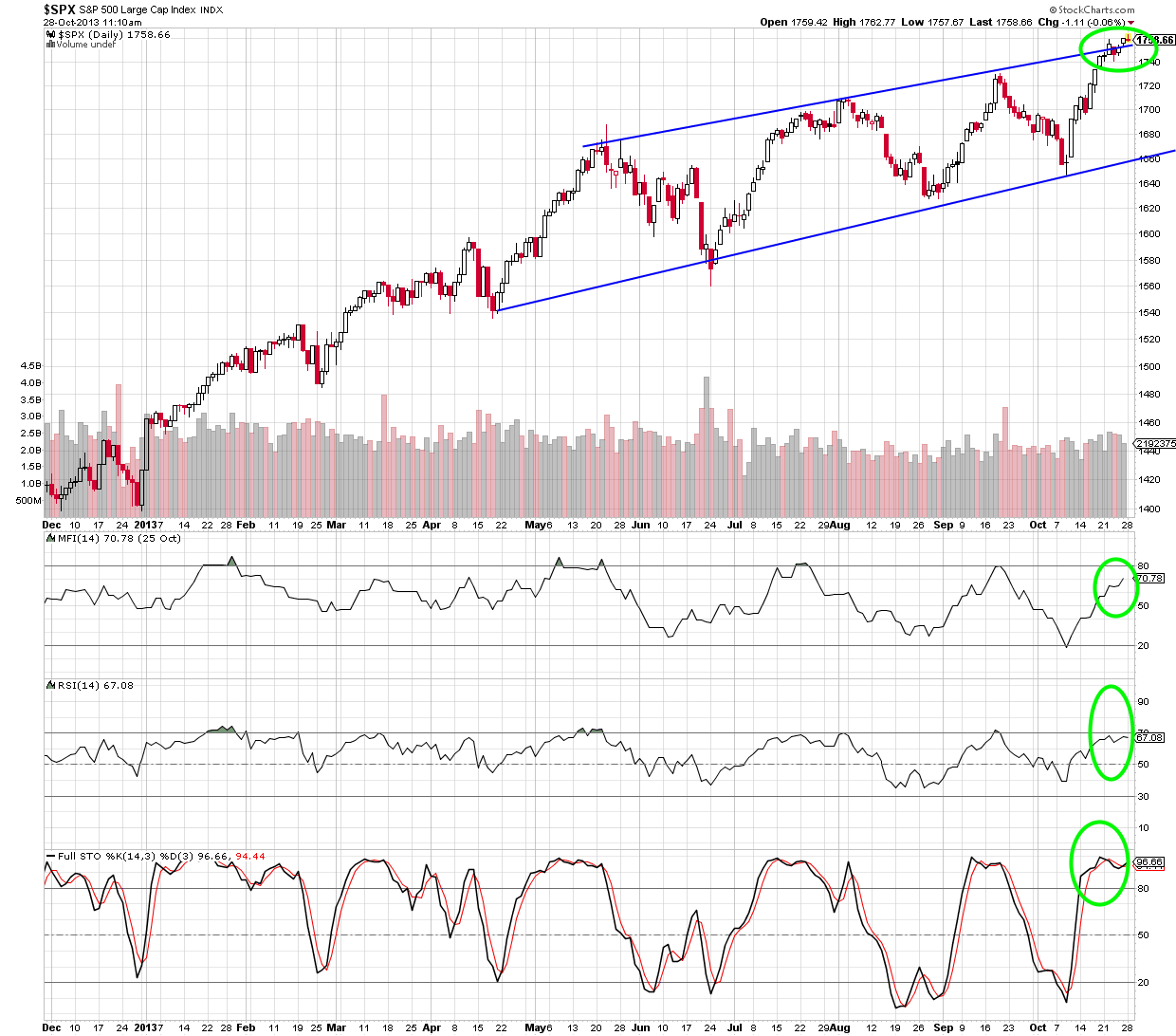 It may be a good idea to utilize any near termed pullback as a buying opportunity, given the grander uptrend that prevails. I committed a bit less than half of my cash holdings to buy new stocks at the bottom or the current trend channel in early October – prior to the debt ceiling debacle. I expect to commit the balance upon a correction in the coming days or so. A reasonable target may be for the S&P to hit the bottom of its trend channel again, which would come in somewhere in the mid to high 1600’s.

BTW- a considerable number of comments by readers, as well as questions I got at the recent MoneyShow presentation, have been regarding the potential for a major market top. I’ll address that potential soon. Thanks for the input, and please keep the comments coming. Your comments and questions inspire me to keep digging for answers, and help the greater community of those who read this blog to learn and explore!