Home / Thoughts of the day

Thoughts of the day

The S&P 500 (SPX) is looking a little precarious of late. It has not met my 3+ day rule of breaking its vital support level at 4300  although it has violated the 200 day SMA, which is one of my two sell conditions. But, man, it keeps teasing that potential with brief breaks below 4300 followed by “just kidding” revivals a day or two later. When will the market make up its mind? There are fundamental and technical reasons why we should anticipate a choppy market (not necessarily bearish, but not bullish either) for the coming weeks or so. This, despite the fact that the SPX has held 4300 for 3 days now – my normal “bullish” rule. I’d like to visit a few charts and present a few fundamental factors that may keep the market churning for a while. Below are my thoughts.

A market of stocks, not a stock market

Take a look at the regular (red line) SPX after the COVID crash – it outperformed the equal weight index during the entire year of 2020. That’s because of its overweighting in the FAANGs and other tech/ growth/COVID-beneficial stocks. The performance of the two merged in 2021 as value and material stocks started catching a bid. You know that I gave you the heads up on that trade.  Now that the market is in a panic, we are seeing the SPX’s greater weighting in overvalued growth stocks (noted above) negatively affecting it.

Meanwhile, the equal weight index is rewarded by its equal weight in materials and value. What this tells us is that – even with a crack of 4300 on the regular cap-weighted SPX over 3 days (which has yet to happen), we should watch the equal weight index to see if it maintains its lows of around 6100 (its just above 6200 today). If the regular SPX breaks without a similar break in the equal weight SPX, this implies there is concentration of impact in the tech/growth sectors. That further implies that we might see chop, but not necessarily free-fall, in a more diversified portfolio. Even better than a widely diversified portfolio, we might be able to outright benefit in a focused portfolio in value stocks, materials, and low beta stocks in addition to cash, if the regular SPX cracks 4300.

You know that ValueTrend has been buying energy since mid 2020, and I have done my best since then to influence you to do the same. An energy crises was in the making at the time, and now here we are. The Russian invasion of Ukraine adds to this reality, but does not determine it. The North American crises was aided by the influence on our politicians by an ill-informed child who showed up to all the big energy conferences. Unbelievably, teenager Greta Thunberg and followers influenced our gullible, votes-at-any-cost driven leaders into prematurely cancelling pipelines, capping exploration and invoking carbon taxes. This, at the precise moment of oncoming world energy shortages.  Clearly, a policy that appealed to ignorant & idealistic “green” voters at the expense of factual longer termed consequences. These policies set the background that have, and will continue driving energy prices up in North America.

Now we are seeing the result of  these idealistic policies implode, making Canada, an energy producing nation, dependent for 30% of our usage on foreign oil. Great move, Justin!  Exploration has been moved back to the forefront (now that the horse has escaped the barn, we close the door!), but its not an overnight fix. ValueTrend owns Canadian energy producers – there is some catch-up trade possible here. As for oil – My chart below shows no resistance until WTIC hits $110 – from its current level in the low $90’s. On the bearish side are the neartermed momentum RSI and stochastics indicators suggesting short termed overbought situation. Note that RSI is negatively diverging as well. But longer termed MACD is just breaking out of a downtrend. This bullish MACD signal, in conjunction with a good chart and bullish fundamentals noted above, implies a longer termed bullish technical outlook. This – despite any near termed pullback. 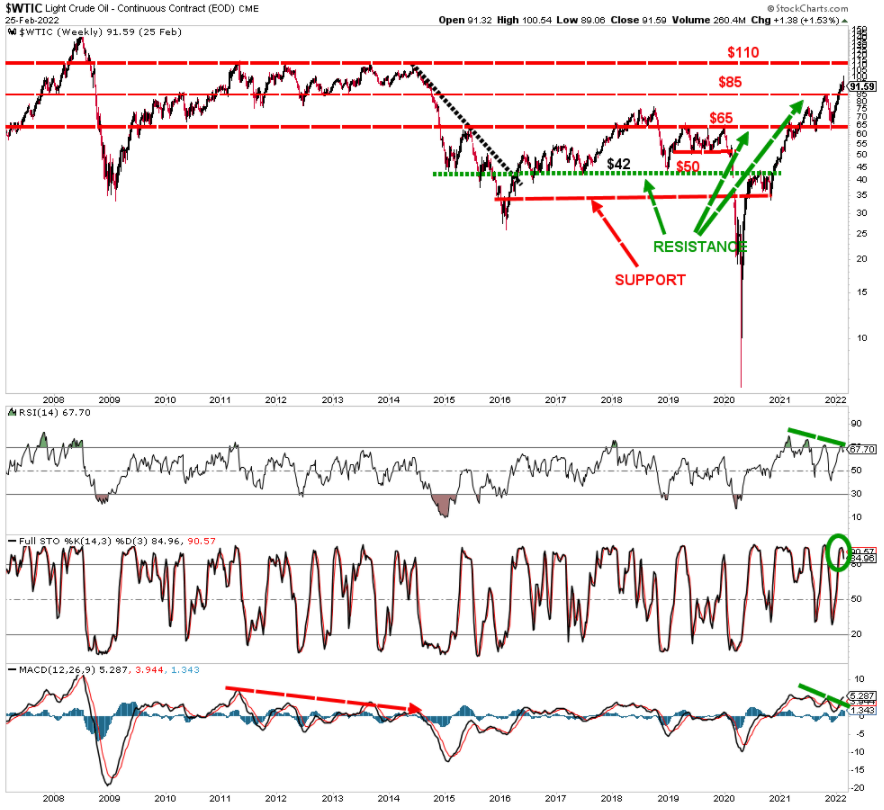 Russia’s invasion of Ukraine is just the tip of the iceberg that sets the international arena up for more fear-invoking events.

Just as Putin can’t tolerate Ukrainian sovereignty, the Chinese Communist Party will never accept Taiwan as a separate country. Taiwan’s, “reunification,” is a primary goal of Chinese foreign policy. In a world order where authoritarian leaders are becoming more assertive, I think we can count on something happening in Taiwan sooner rather than later.

China will be keeping an eye on how weak the US & allies are in preventing such invasions. And, as in the current Ukraine situation, we will experience market selloffs and sector rotations. Key to this will be a continuing need for energy, materials and resources.

As always – I like to point out some obvious ineptitudes by our dottering PM. The most recent example of which has potential investment issues surrounding it. Don’t bother sending me emails or disparaging comments. They will be deleted immediately without reading or posting or responding past the first indication of anger. As I always say – this is my blog, these are my opinions, end of story. Price of admission for accurate market analysis. Go read someone you agree with if you don’t like my rants.

Speaking about authoritarian leaders, Canada is on the world stage these days. No matter how well the government & its paid-for media machine spins it to Canadians, the horrifyingly close attempt at invoking the emergencies act  by the Trudeau government is the talk of media in the rest of the world. I am hearing shock coming out of the USA, Britain, and other countries. The act was cancelled at the last moment – and I’m hearing that it was not because it was the “right thing to do”- but upon realization that it did not meet the criteria for cause. This rejection of the order would have forced a humiliating defeat to Trudeau and party – and political suicide. The act was cancelled. But the intentions were clear, in my opinion – create an environment of fear and control towards anyone who would question this government’s directive. As the Financial Post (and others) noted: “Trudeau’s flimsy excuses for declaring an emergency cause concern for the future. None of his reasons is sufficient for invoking the Emergencies Act, and no emergency can be fabricated by combining them.”

Why this matters:  Beyond the obvious questions of personal freedom – there are investment reasons to be concerned. Recent actions by Trudeau may inspire less confidence in our government, and in particular – the perceived safety of our banking and financial systems by foreign investors. As an investment firm, we too “got the memo” making it clear that we may be directed through the emergencies act. I can’t explain how I felt reading that notice.  Think long and hard about this – How does a foreign corporation or nation feel now about investing in Canada, given recent government actions? Will individual foreign investors avoid investing in Canada out of fear of holding “unauthorized opinions”?

Its hard to say that anything has changed from this perspective – yet. But we should keep this in mind. I certainly do, despite my favoritism of Canadian energy producers noted above. Anything can change.

Always “keep an eye” – as my sons hockey coach used to tell the team.