I’ve been ranting on (and on…) about the over valued tech stocks, and their effect on the market for several months now. True, my rantings made me appear misled, as the market raged on (and on). I even recently cautioned a friend that the timing (not the concept) of buying index ETF’s at this time was not good. He replied: “You felt the market/tech was overdone three months ago. Yet they keep going up. Perhaps this time is different”

Sir John Templeton’s famous quote of “This time its different is the most dangerous thing to say when investing”  has rung in my ears during this entire Stay-at-home rally. Many smart market strategists have been suggesting that this time really is different. Sir John was wrong. So was I, it appeared. Or was I?

About a week ago, before the correction of late, I once again shouted my message upon deaf ears on this blog. After all, I’ve been the broken record since June, shouting the same message, and eating crow right after doing so. Why would anyone listen to the overly cautious investors like me? For that matter, why follow Buffett, or other billion-dollar managers like Tepper, Druckenmiller, Ackman, Minerd – who have also held cash and been underweight tech? Google these guys if you don’t know who they are. Its been the retail investor, Robinhood speculators, and index players who looked to be right…valuations, overbought sentiment, historic technical patterns be damned.

We even sent out a special ValueTrend update on Thursday (day one of the current correction) discussing the potential for continued correction, and how we are positioned for it. Are you a subscriber to the newsletter? If not, hit the button on the front page of the website and subscribe. Click on our contact page and we’ll send you last weeks newsletter. In that newsletter we presented a case for markets to correct based on election patterns, the recent news on a vaccine pending in November, and the individual effects on the FAANG stocks in light of a potential Biden election win. And how we are positioned to deal with this situation.

I recently even called out Tesla as ready to drop – given that all of the technical indicators I look at painted a similar setup to Bitcoin’s topping pattern of late 2017 (BTW–I did call the Bitcoin top in this blog written November 2017 ).  Here’s the blog link to my recent blog on the market, and TSLA. Below is the Tesla chart since that blog, which was written on August 24th:

How long will the current selloff last?

Its been the small traders (stay at home people, new to the market via online services) who have been a major part of the current market madness. They are focused on both the stocks, and the options surrounding those stocks. They, along with index investors, have forced money into the FAANGs at an unrealistic clip. Now we are hearing about the potential for some of these positions to unwind as call options prices collapse. Softbank is in the news as a potential threat to these stocks, if they are faced with further pressure on the stocks and forced to start unloading their potions.

Below is a chart of the three groups of options speculators (small, medium, large traders). If you have been reading my blog for long, you know that its the small speculators who make up the “dumb money” side of the investment world. The chart below, courtesy sentimentrader, shows us some trends. The blue line (small traders) has trended up, while the red line (large traders) has trended down. The blue line (small guys) is at 20 year highs. The red line (large guys) is at 20 year lows. Guess who is typically right, and who is wrong, at market extremes? 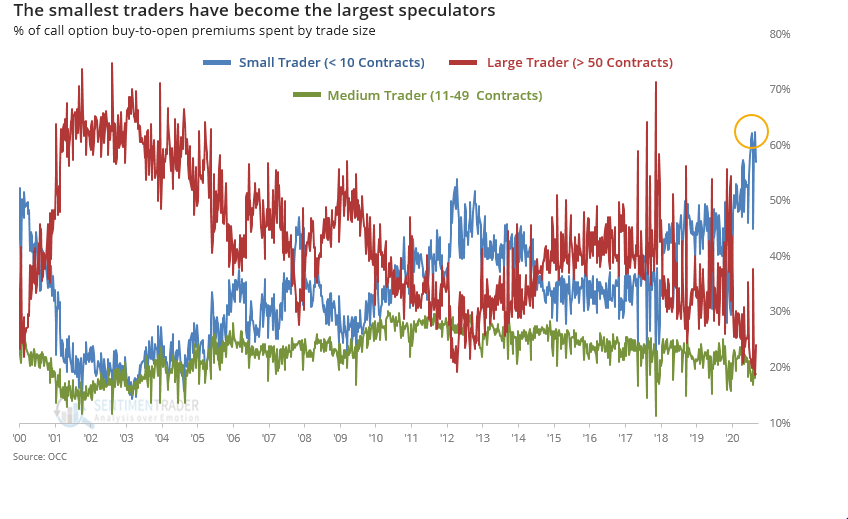 Here’s a chart of the S&P 500. I’ve noted a couple of support points on the chart. The first level, which lay at the old high from February, has been taken out. Note that the momentum indicators are early if they are indeed starting to round over. Should they continue to show weakness, we might see 3200 tested. If that cracks, the next stop is likely at the 200 day SMA (red line) which sits at about 3100. 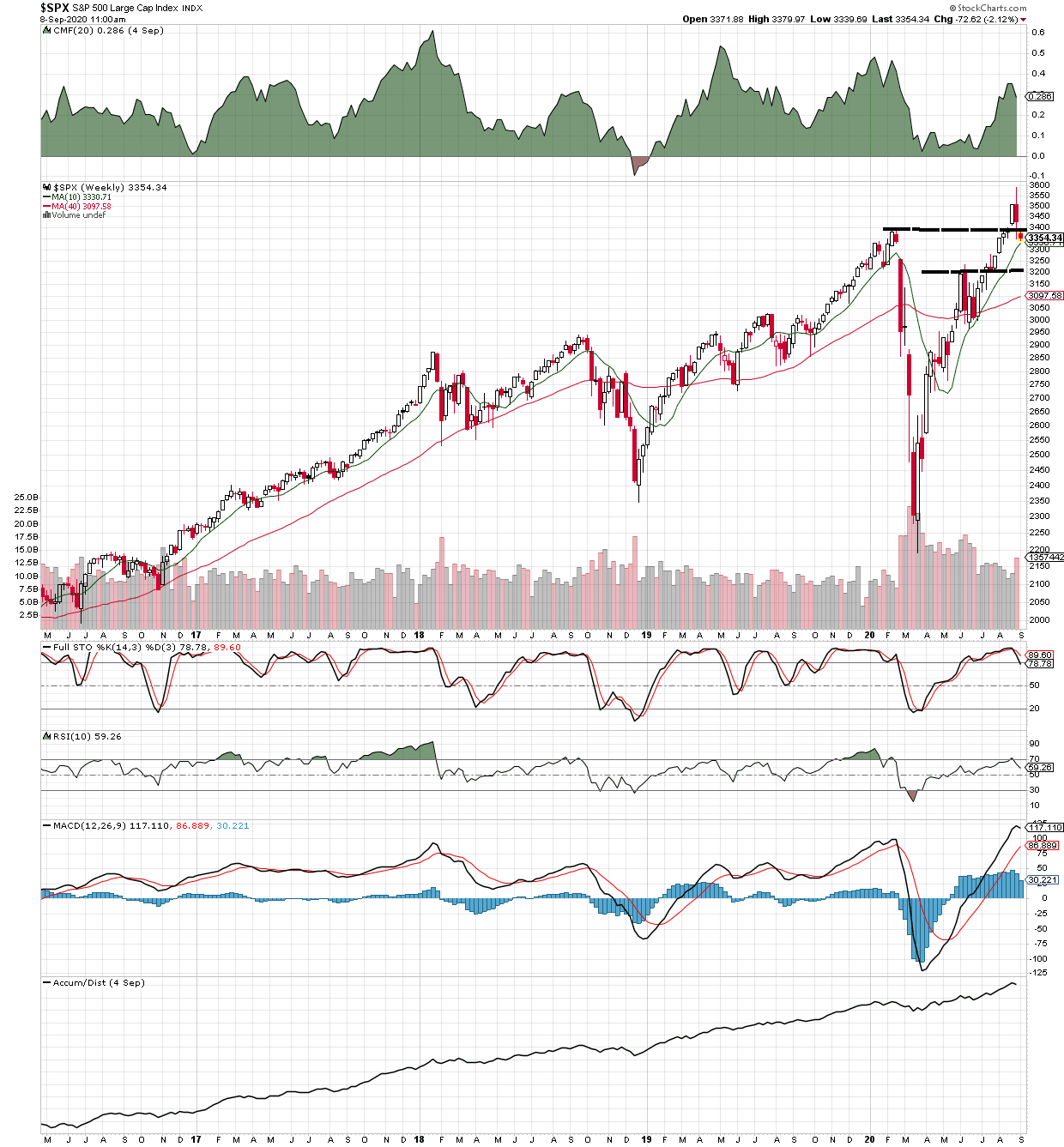 How we are positioned

Our Equity Platform holds almost 25% cash now, as does the Aggressive Growth Platform. We are very underweight in technology with only 10% exposure. Instead, we’ve focused on value and dividend stocks like Berkshire Hathaway, Walmart, and others. This, along with diversification into Europe, Emerging Markets and even a bit of commodity exposure through a base metals stock and a Gold ETF.

Opportunities are coming, but you must have cash to take advantage of them.  This is not the end of the world, its a much needed correction. I’ll keep blogging my thoughts – and I’d encourage readers who don’t subscribe to make sure you do to our ValueTrend newsletter. This is an abbreviated form of our client-only newsletter – and it contains the highlights (without specific stock picks) of our ongoing strategy. And by the way – if you feel you would like to reduce your portfolio’s forward risk potential through a portfolio management program like ours, we’re always available to talk to you about your individual situation.