Another long one folks, but worth reading. I’d like to thank Gabriella S, former chapter head of the Montreal CSTA for inspiring me to review a recent interview with Jeremy Grantham. Mr Grantham is CEO of  Boston based GMO, who manage a paltry $118BB in assets (ha!).  Jeremy Grantham has earned a reputation for correctly calling out asset bubbles – and unlike most of the big financial institutions who follow the crowd (discussed on my last blog) he’s not afraid to call a bear when others are bullish. He made correct bearish calls ahead of major events such as the Japanese market bubble of the 1990’s, the Tech Bubble of the early 2000’s, and predicted the Sub-Prime/Real estate bubble of 2008-9. In an interview in 2021 – and an updated interview he just conducted, Grantham suggested that we are in for a 50% type retracement (from the market highs) as happened in the prior bears he accurately called. Today, I wanted to examine the potential for this prediction to be correct.

To start, you may recall that I have written a couple of blogs recently suggesting that the market (and Advisors) are becoming pessimistic enough to suggest a bottom is near. Having said that, I also noted that if the S&P 500 breaks 3600, all bets are off! Trend trumps all, and so long as we see lower lows and lower highs and maintain a price below the 40 week/ 200 day SMA–we are in a bear.

ValueTrend is unique in that we employ a 3-pillar approach to investing. Macro Technical Analysis, Risk/Reward Probability Analysis (Bear-o-meter), and Fundamental Analysis- learn how to use that system here. All three must agree to trigger us in making strategic decisions.  This is why, in early April, when the Bear-o-meter went into High Risk territory, I called an “All hands on deck” alert. The SPX had made a lower low AND was also below the 200 day SMA. Backed by the high risk signal from the Bear-o-meter, we went heavily into cash that month (starting at 30%, then adding another 8% cash when the market rallied in August).

Next week I will read the Bear-o-meter. If it reads neutral, but the market moves to a lower low (sub-3600)–there will be no reason to start buying. In fact, our ValueTrend trading system forbids us to do it. Again – You can learn how to use that system here. Stay tuned for that reading. Now, lets get to the “worst case scenario” view as predicted by Mr. Grantham. Below are my observations surrounding the potential of his downside projections.

Mr. Grantham echo’s ValueTrend’s sentiments towards taking some sort of evasive action when viewing a high probability correction. As I have noted many times in this blog, it is true that markets rise over time. And its also true that you cannot be 100% sure of any market projection. Its always probability analysis – not sure-thing crystal ball analysis. Having said that, the reasoning behind holding at least some cash and reducing your beta for the stocks you do hold is simple: It can take many years to make your money back if you remain fully invested. Holding cash and effective sector rotation can significantly reduce your break-even time.

The Nikkei 1989 peak/crash has yet to recover. 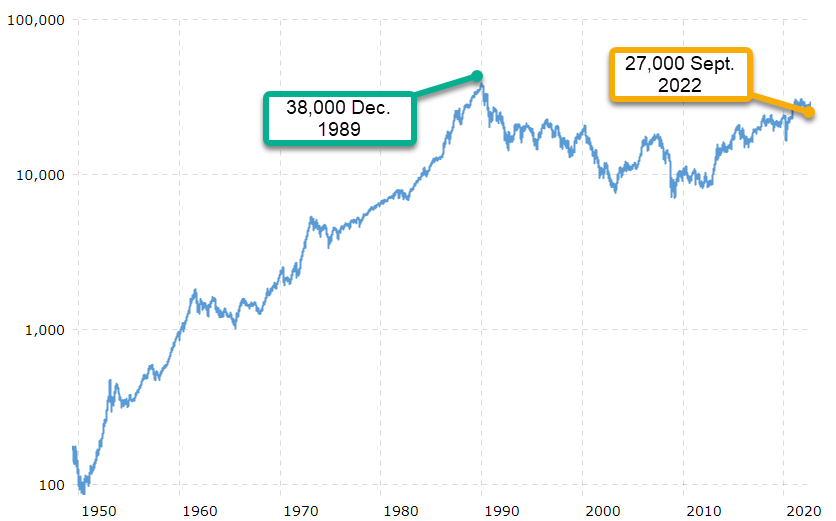 Grantham notes that bubbles are lead by parabolic deviations from the trendline – as I describe in my book Smart Money/ Dumb Money. He notes that the recent bubble was, as with the bubbles noted above, a 2 sigma deviation off of the long termed trendline. For those unfamiliar with statistics (let alone Justin Trudeau who cannot do basic math), sigma is effectively standard deviation. I’m simplifying this – but in any distribution, such as movements surrounding a trendline, 95% of all moves will stay within 2 standard deviations of that mean (trend). According to Grantham, the peak in 2021 was a 2 sigma (std. deviation) move off of the trendline -similar to the 4 bubbles noted above. As such, he anticipates a move back to the trendline, which the market has done in the past 4 bears noted above.

Here is my chart with a projection line suggesting a return to the long termed trendline. I’ve drawn a trajectory to line up with former support near 2500. This target lines up with Grantham’s target.

Note that history supports this potential. On the chart you can see that the 2009 trough retraced to its former support level seen during the 2002 bottom. Slightly lower, actually. That 2009 retracement allowed the SPX to meet its long termed trendline – something that did NOT happen in 2002’s low. 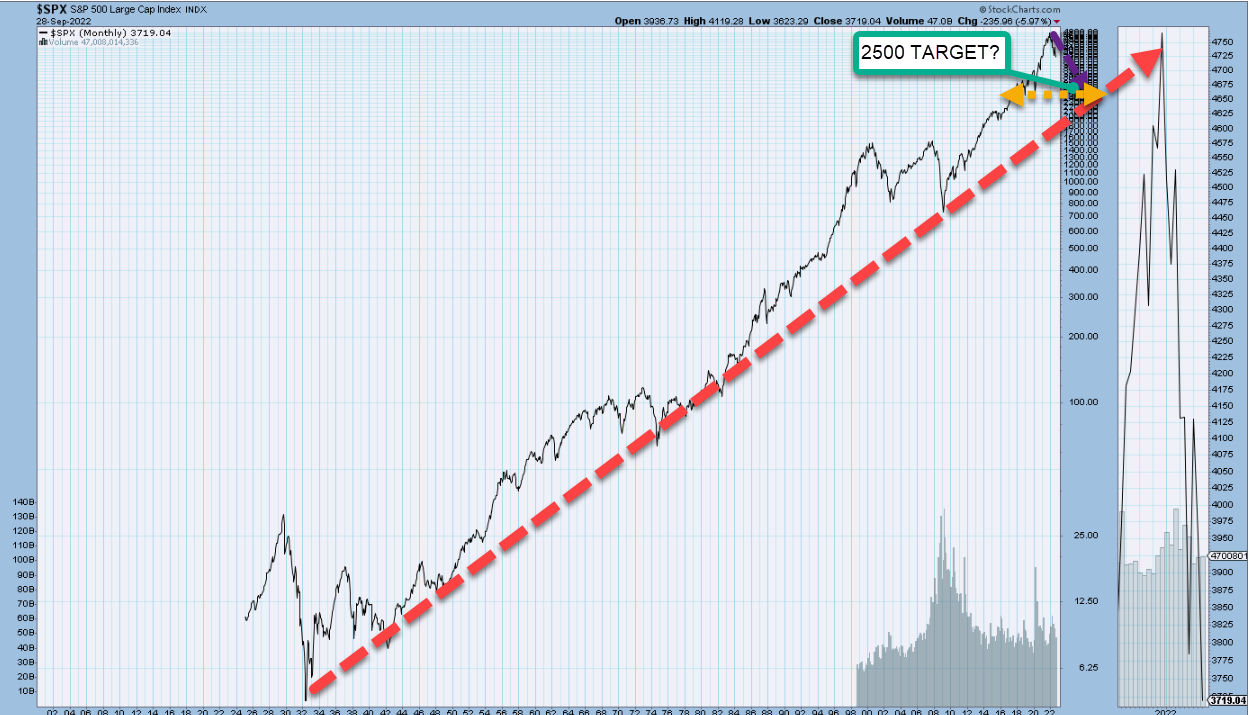 Should we run for the hills?

Regular readers of this blog know that I have recently been pounding the table on the necessity of thinking for yourself. This means following a systematic way of investing, not to be swayed by every Talking Head, Advisor, Guru, or even smart guys like Jeremy Grantham.

Don’t take my analysis as “truth” either. Read it, take my notes into consideration, but in the end, you need to think for yourself. Having said that, I will repeat my technical plan – which IMO is a balanced view of the markets. This plan steers ValueTrend away from reacting to ANY bullish or bearish bias. We simply watch for ANY of the following levels to guide our decisions. Here are my updated targets for the S&P 500 – noted by green horizontal lines on the chart below.  I encourage you read the details as outlined in this blog:

That’s it for this week folks. Keep your head on straight in this market. You can’t predict. You can prepare.