I’m doing a webinar for the MoneyShow and you can join in – Technical Lessons from Past Bear Markets. Its on May 7th 1:20 pm – 1:50 pm. Here is the link. Just sign up at the bottom of that page.

As promised in my last blog, I am going to present you with a plan that we utilized in the prior bear market to help us recover much faster than the market did. It’s a long one today folks. I hope you find it a worthy read.

To start, here is why you need a plan, and not rely on brokerage research:

March: “bull market is over”

But wait, they changed their minds:

April: “the market can look through 2 bad quarters of earnings”

After that, we now have their most recent report (courtesy Beartraps)… note that this does line up with our viewpoint:

Goldman expects market to fade in the near-term and come close to a re-test of the lows before jumping back higher in July. 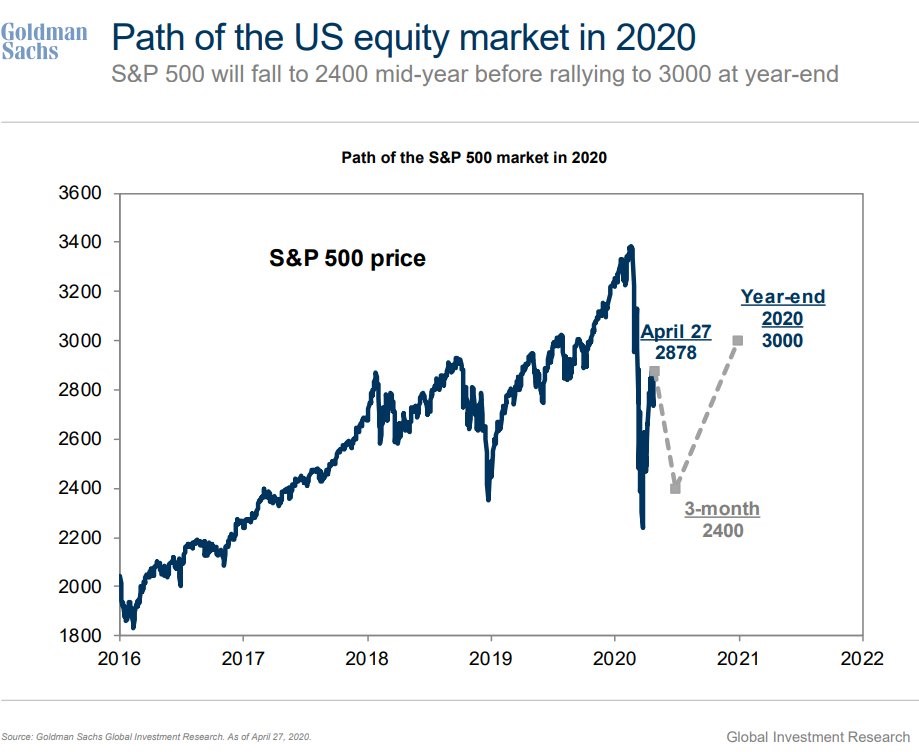 GS points out that bear market rallies are extremely popular and happen in every recession. However, the current market bounce of nearly 35% is much higher than usual. 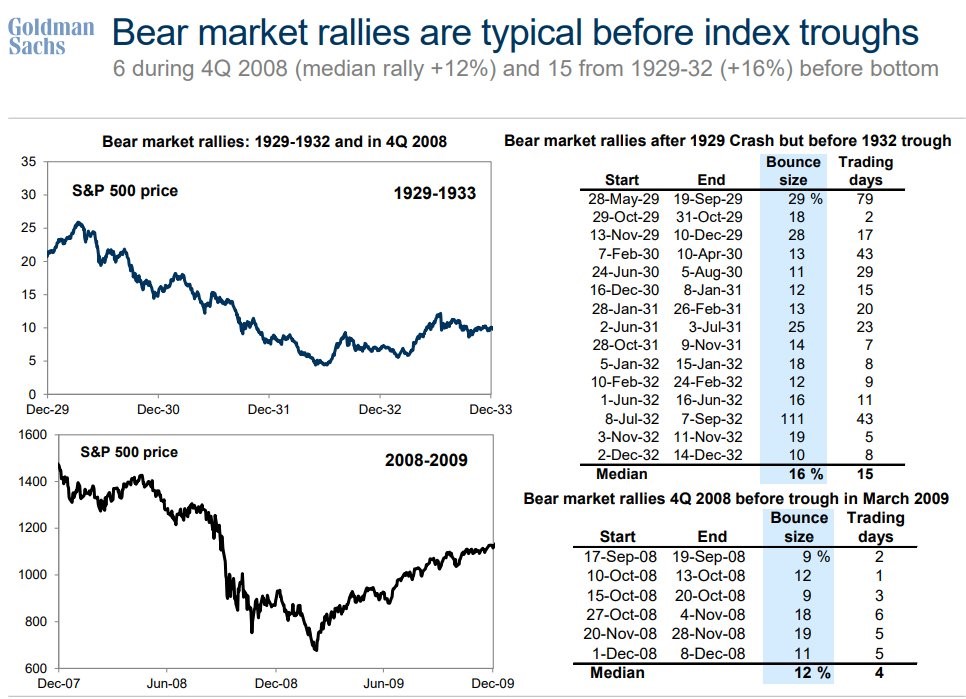 A couple of points to start off with:

The Bear-o-meter is a compilation of trend, breadth, sentiment, value, and seasonality indicators. It attempts to read the relative risk vs. reward trade off in the market at any given time. The Bear-o-meter is monitored every month in this system. Back in 2008, I didn’t have the current Bear-o-meter.  Seasonality, and sentiment (put/call ratio) were my focus. To be honest, I wasn’t as influenced by these factors as I am now.  Readers of this blog have access to the Bear-o-meter in the first week of every month when I report its reading.

In last week’s blog, I noted that my definition of a bear market is a lower trough on the weekly chart. A move below its 200 day Simple Moving Average for more than 3 weeks confirms it.

The chart below illustrates the SPX during the 2001/2 crash and the 2008/9 crash. Early in the 2008 crash, the market fell from its initial high of 1550. It put in a lower trough at around 1250 by the spring of 2008. I was still in the market at that point. The initial selloff is very hard to catch in a bear market. We had raised a little cash for the typical “Sell in May” period on that rally, but only about 10%. When that rally failed at the 200 day SMA, things took a different tone. The market sold off and fell to a lower low – this time to around 1200. At this point,  it became evident that the market had moved from a correction and into a bear.  I began to look for rallies to exit. The market did rally later that summer, and I sold more equity. The point being, I was looking to sell the rallies. I didn’t catch the initial selloff. Not many people can do that.

As you might notice on the chart, the market declined rapidly that fall. We were somewhere near 20-25% cash at that point. Sure, we took it on the chin along with everyone else, but we had a little less downside. More importantly – we had cash to spend when the market bottomed. More on that later.

Lesson learned from 2008: Sell on the first rally after a lower low on the weekly chart and the market has moved below its 200 day SMA.

Applying it to 2020: The weekly chart remains below its 200 day SMA (green line on chart above). As such, I sell the rallies, and buy the dips. In other words – trade. Following our plan, we’ve sold into the recent rally.

Q: How do you know when to sell in the rally?

A: You don’t! But the most common retracement lies around the 50% recovery point. The current retracement hit about 62% yesterday (a Fibonacci level watched by traders).

We’re at 35% cash right now. That will change if/when the market moves above the 200 day SMA and stays there for 3 days. It would change even more when it stays there for for 3 weeks. More on this later.

The chart above shows this simple system. You can see that it worked well in the 2001 and 2008 crashes. It head faked us in 2016, and we lost money on selling the lower low after a lower high. We ended up buying again on a rally higher, which sucked. So its not perfect. But, its been better than buy and hold over the longer term.

Like the Bear-o-meter, this is something I didn’t do in 2008. Craig and I have focused more on beta since those days.

Beta is the measurement of how a stock or portfolio performs against a stock index like the TSX 300 or the S&P 500. A beta 1.0 means its inline with the market over whatever period is being measured. A beta of 1.2 means it has about 20% more volatility (up or down) as compared to the index. A beta of 0.80 means about 20% less volatility. Clearly, you want higher beta in a rising market, and lower beta in a falling market. We look to keep our beta on the low side when we determine it’s a bear market.

Understand that cash lowers your overall portfolio’s beta. Conversely, you can maintain a higher proportion of securities in your portfolio if they are lower in beta. For example, we have some healthcare and environmental service stocks in our platform that are in the 0.6 beta range. A portfolio filled with other such low-beta names would result in a theoretical performance similar to a 40% cash weighting.

Currently, we are holding about 35% cash in our equity model. The total portfolio beta is 0.67. This means that our stocks are very slightly above beta 1.0, but not enough to be meaningful. The high cash weighting is mainly responsible for our low beta.

If the Bear-o-meter reads in the lower risk zone, we can add back to a bit of equity by reducing cash. But again, trend trumps everything. So we really want to wait for a trend signal to get too committed to equity. Case in point: we held some cash coming into the March selloff, and committed some of that cash when the SPX had initially fallen to around 2900. The Bear-o-meter was signalling low risk at that time, per this blog. It was wrong. Things got worse.

The Bear-o-meter would have been accurate in a normal market correction. This selloff turned out to be anything but that.  We use the Bear-o-meter to tweak cash, not to go all-in or all-out.

What happens if the market goes above the 200 day SMA but isn’t making a higher peak? Well, we can still step back in again in an orderly fashion. We can move in early, even before the 3-week rule kicks in. But only with an initial step. Especially if you have a favorable Bear-o-meter signal. We often like to buy in thirds. So we might go in with 1/3rd of our cash on an initial move over the 200 day SMA.

Lesson learned from 2008: Buy on the first move above the 200 day SMA in one increment. Invest more of your cash as the market moves higher for 3 weeks. Go all in when it takes out its last peak. In 2009, the market completed a Head & Shoulders bottom pattern by June. It had moved ahead of its 200 day SMA by May – see the chart below. The neckline for the SPX was 925. As the market rallied through that level in August, I added to equity. In hindsight, I could have chanced it and added a bit on that original break of the 200 day SMA with at least one increment of my cash. I bought depressed sectors like gold in late 2008 and oil in the spring of 2009 to start off. But its always different.

Applying it to 2020: The market made a lower low on the weekly chart in March. While one reader pointed out that its made a few rising peak/troughs on the daily chart of late, I do not see a higher peak on the weekly chart. Nor do I see a break of the 200 day SMA, which lies near 3000 on the SPX (red line, chart below). If 3000 is taken out to the upside, I expect to add one increment of cash (after 3 days). If it stays above that level for 3 weeks I’ll step in with more cash. As the market moves higher, we commit more cash.  Buying a dip after a higher high is a great opportunity to step in with more of your cash.

So long as we keep to the  bull market definition (rising weekly chart peaks/troughs, above the 200 day SMA), we stay net long. Sure, we might adjust cash up or down according to Bear-o-meter readings. Same with beta, discussed above. But we are talking smaller increments. The weekly chart below illustrates the 200 day SMA (red line) is still well above price. Using my rules, we can’t re-enter yet. But its getting closer. We shall see.

Pulling out the crystal ball

The most likely situation is for a pullback. I’ll go along with Goldman’s targets noted at the top of this blog. Who’s to say?

The S&P 500 is very close to its 200 day SMA. It could move above it. Rules are rules. I know what to do if that happens. I will buy an initial small amount of equity. I’ll step in gingerly, and conservatively. But rules are rules. A move above the 200 day SMA that lasts more than 3 days must be bought.

If things break down after that I can sell. Yes, you can always get whipsawed. Better that than ride a new leg down.

If the market moves into a sideways up/down basing period, I can buy and sell (swing trade)  using the 200 day SMA, or a shorter SMA and augment these signals with oscillators and Bollinger Bands as my guideline. But that is to be seen.

Meanwhile, I remain committed to holding our current reserves of cash that I raised over the past 2 weeks so long as the market sits below the 200 day SMA. That’s the rule.

The above steps represent how I played the market in 2008/2009, and came out (all things considered) in pretty good shape. I can’t guarantee that this strategy will work again. But, its better to have a plan than to wing it, in my opinion.  From this point, as my favorite Rock Band Rush once sang in the song Roll the Bones: “Good work is the key to good fortune.”