Home / The long and short of it

The long and short of it 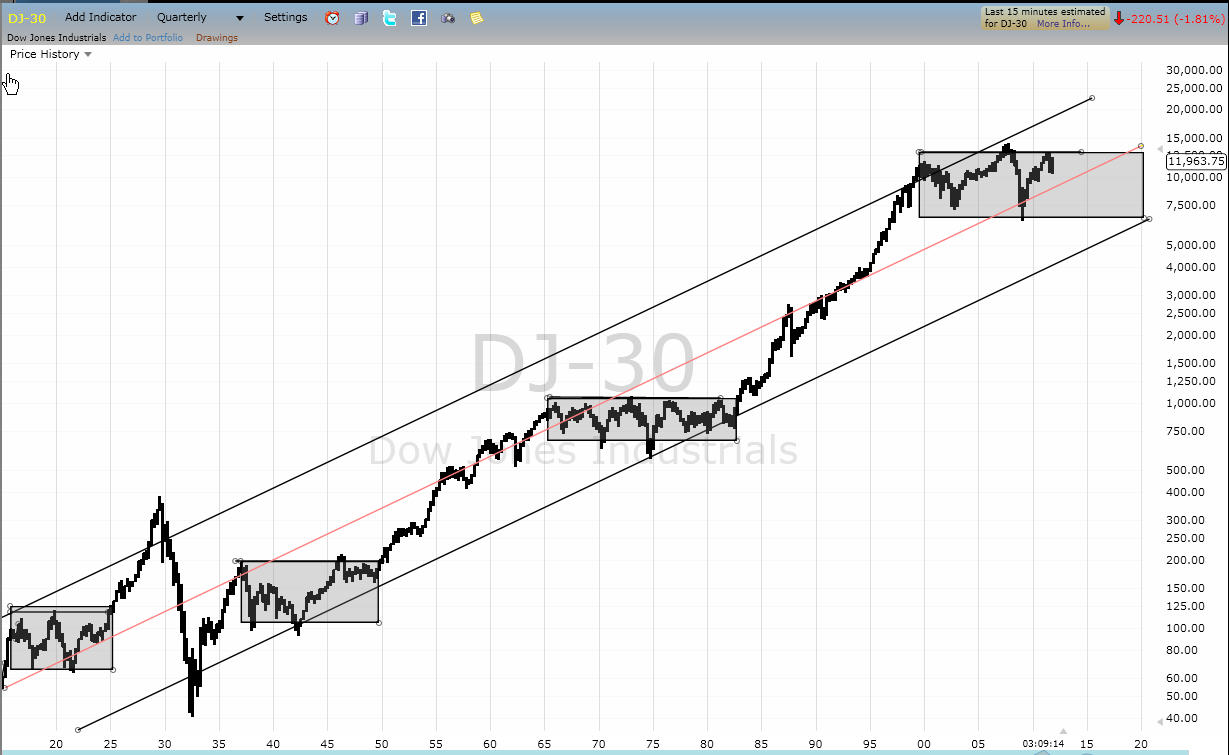 This commentary is a bit longer than my usual weekly blog, but please bear with me, as I think it might be a useful read for you.  I’ve drawn a trend channel on the DJIA going back to 1900. A trend channel tries to contain the greater amount of movements within a trend to visualize the approximate top zone and bottom zone for that security. You can also use a trend channel to project where future extremes might come into play. For the Dow chart presented here, I’ve made a couple of observations that might be of interest. First, I’ve marked the sideways periods with  gray boxes where the market couldn’t penetrate an overhead “ceiling” for an extended period of time. Since 1900, there have been four such periods including the sideways market we’ve been stuck in since 1999. Each of these four sideways periods have been “lost decades” or more—the last sideways market was about 17 years long (1965 -1982).  All were characterized by high volatility and large price swings hinged on various worry-inducing events of the time.

On the chart (courtesy freestockcharts.com) , I have projected the current sideways market forward so that it meets the bottom of the trend channel. The Dow would reach the trendline in this projection around the year 2020, with a potential low point of around 7500 (the same approximate low seen March 2009—7200 to be a bit more precise). The red line is the median point in the trend channel (not to be confused with a linear regression line). It seems that the Dow finds support at that line when trading in the top half of the channel, and finds resistance there when trading in the lower half. Thus, in the near-term, the Dow could find neartermed support where it hits the midpoint at around 10,000. The test of the median line may signal the end of the current lost decade, and this could occur fairly soon. As you will note with prior sideways periods, when the Dow met the median line or bottom of the channel, the sideways period ended.

My thoughts are that the markets will trade sideways through the median line based on the likelyhood of current macro-events (global deleveraging) taking several more years to work themselves out. The forward downside projection when using this trend channel might be around 7500 or less for the Dow, and 700-ish for the S&P 500 (not shown) if the markets trade sideways into the lower quadrant of the trend channel. The upside for the Dow in the longer view would bring us back to the red median line or 15,000-ish, which neatly corresponds with the top of the current sideways trading range. This projection provides an estimation of the potential length and depth of our current market currents, should the sideways market continue until 2020 (i.e a total of 20 years since beginning). Its a great unknown as to how much longer the markets will remain range-bound – but the above chart provides food for thought, if nothing else.

A few thoughts on the intermediate term:

-When S&P broke a rectangular top at 1260 support this fall, it entered into a new bear market/downtrend — despite a potential for a brief rally to 1300-1350  (which may or may not even happen- see “Santa” below)

-Next year is the 4th Pres. Election year. Although it is usually thought that the year following an election is weakest,  it is worthy to note that some of the biggest single year draw downs have occurred during the 4th year of the Presidential election cycle such at 32% in 1917, 23% in 1929 and 33% in 2008.

Will the market have its Santa Clause rally or an early-year rally in 2012?  Here are some positive and negative factors that will help answer that question, as applied to the S&P 500 stock index. Personally, I give it a slight near termed upward bias, but a bearish bias later in 2012: 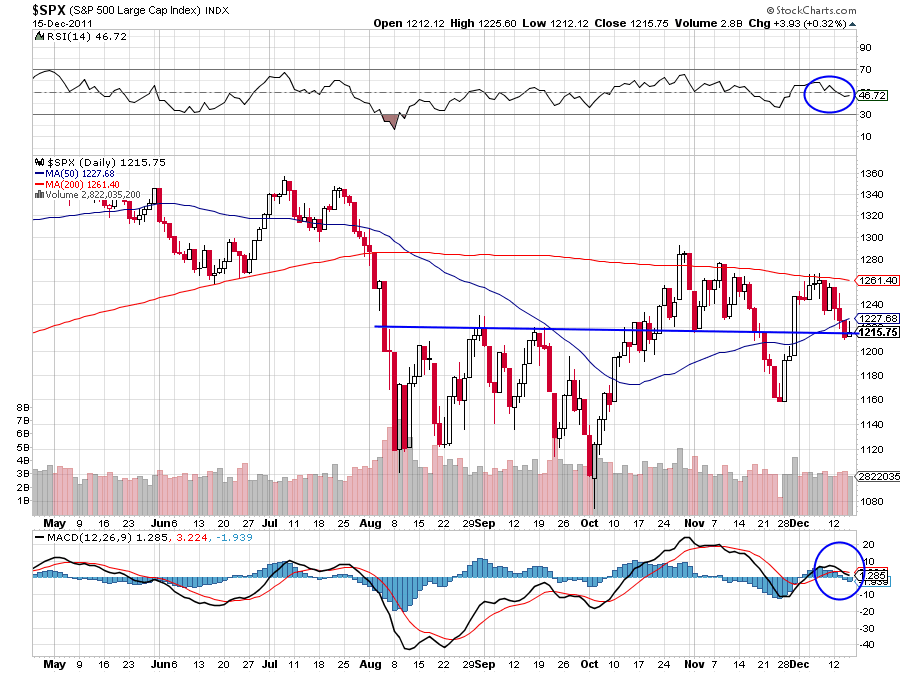