Home / The long and short of it all

The long and short of it all

Today I’d like to review the longer (macro) termed outlook via a current reading of my Bear-o-meter. I’ll re-post a chart of the S&P 500 that I’ve put up a couple of times that will point out a few potential technical targets for that index.  Finally, I’d also like to review the neartermed probability targets for the S&P 500. Lots to cover here, so I suggest we get started… 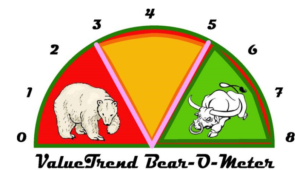 For those new to my blog: The Bear-o-meter is a risk/reward measurement against the US markets. It is not a pure market timing tool – rather, it gives us an idea of the current environment stacks up against historical risk and reward tendencies. I rank various indicators that fall into 5 broad market macro Technical analysis parameters. They are:

The Bear-o-meter is ranked 0-8 from least attractive risk/ reward to highest. Three categories, which can be seen on the graphic above, shows high risk, neutral, or lower risk zones—all depending on the recent numeral reading of the compilation. Currently, the Bear-o-meter reads as “3”. This is a low-neutral reading. It implies some level of risk that may be higher than a normal reading, but it is not implying armageddon.

Changes from the December 10th 2018 reading include a positive change on the % of stocks above their 50 day SMA’s on the S&P 500 (it is reading an oversold level – which is a positive sign). Offsetting that was the New High/New Low reading of the NYSE composite, which went from a positive reading to a neutral score (oversold to neutral). Bottom line, the Bear-o-meter continues to read at the same “3” level as it did in December. Not much of a predictive edge here. There has  been no radical change in status for the risk/reward outlook of the markets, but perhaps no news is good news…

Here’s a chart I’ve posted before outlining the potential support resistance zones for the S&P 500. I noted on this blog and on my last Bloomberg/BNN appearance that the S&P 500 should rally back to the mid 2500’s. Right on schedule, the day after I noted this potential on BNN, the market began to rally from its low point. My determination of the rally was based on my Near-termed timing model, which I will discuss below. It had been nearing a signal point on the day of my BNN appearance – hence my confidence of a neartermed rally stated on the show. The move still has strength.

Even after a very negative open on yesterday’s markets, the factors that drove this rally managed to turn things around and post a positive performance by the end of yesterday’s trade. This was what the neartermed model suggested might happen. Today the market is down on news from Apple. However….The market wants to rally back—and I feel it will get into the mid 2500’s (vital support zone from 2540-2580 per chart below) before you can shake a stick. 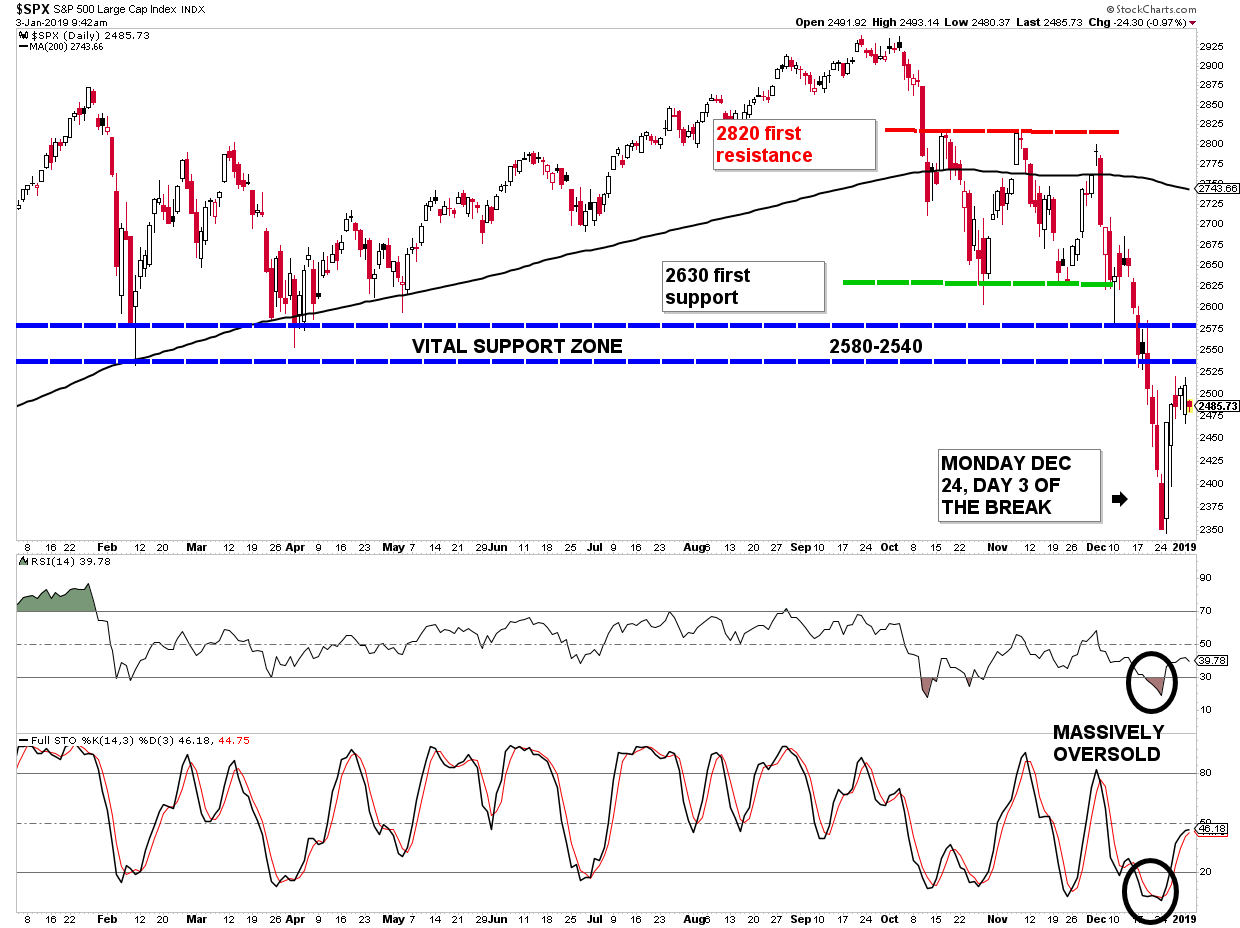 The potential is there for the SPX to return to its former trading zone seen through virtually all of 2018 (roughly between 2600-2900). But my bet is that it won’t make it back to that zone immediately. One factor that causes me concern regarding an imminent return to that 2600 – 2900 zone is the low volume on the current rally. Yes, it’s the holiday season – and that is a period of low volume. But there’s more to it than that. With pro traders and smart money away over the holidays, swing traders, programmed trading – and possibly some short covering – may have pushed the indices from an already massively oversold situation. I have no hard evidence to that thought, but it may be plausible.

Next week will tell us if this rally is here to stay, or if this is yet another head fake. You’ll note on the chart above that there have plenty of those (head fake rallies) on the way down since the October highs. A failure for a rally to hold in the “Vital support zone” implies a revisit of the December lows (2300’s).

My neartermed timing model has been referenced in past issues of this blog.

It’s a pretty easy to understand this timing model. To use this system, apply the default lookback periods to Bollinger Bands (BB), stochastics, and RSI to a daily chart. Signals occur when you get:

Please note: the Neartermed model is not very good at predicting the duration or the extent of a signal. But its accuracy for predicting turning points of those moves – however large or small they may turn out to be – has been pretty darned good. Bull move indications are seen on this chart via green vertical lines. Bear moves are indicated by red lines. Most of the moves only last a few days to a few weeks. Hence the name “Neartermed timing model”. 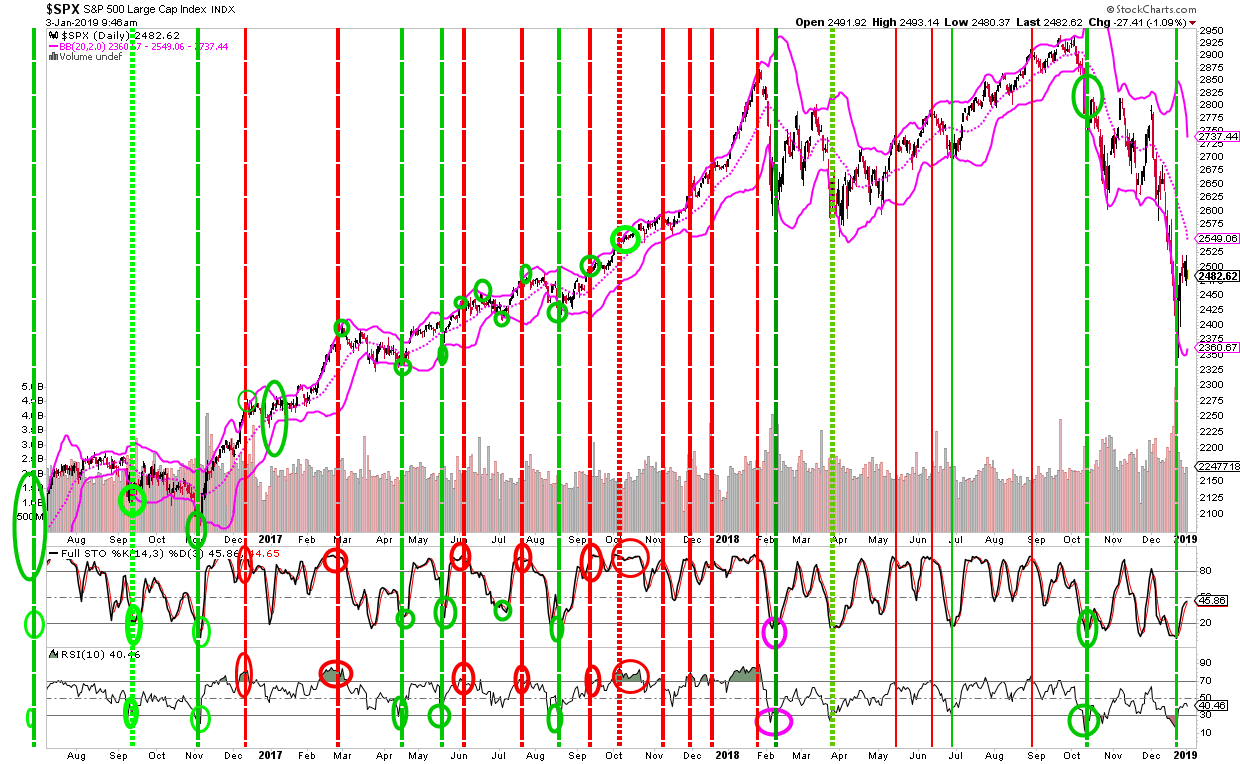 As you can see, the model did an awesome job of identifying the recent capitulation point on Dec 24, 2018. RSI and stochastics and BB indicators suggest the rally has more upside. RSI sits at 40, stochastics sits at 45 and the S&P remains below its 20 day SMA (center line) They are barely half way through their respective zones, having come off of a massively oversold pre-Christmas level. Because of the relative position of the indicators vs. the SPX, I am sticking to my mid-2500’s target. From there, I will have to wait and see what happens. For my money, I am inclined to sell as these indicators move towards an overbought level, or if markets do not show continued strength after reaching the mid 2500’s. However, if markets do show strength and carry forward into the 2600’s, I’ll be a buyer. Its a wait and see game for now. I’ll post updates as things develop.

The macro picture remains neutral to somewhat above average in risk/reward status (Bear-o-meter). The mid-termed picture looks like the S&P 500 may continue its oversold rally back into the 2540-25-80 zone, where it will meet very significant selling pressure. The short termed timing model suggest the rally has a bit more left in it, suggesting we have a good chance of revisiting the 2540-2580 zone pretty soon. Assuming the S&P can hit that target, it will be prudent to analyse market conditions at that time.  Don’t prognosticate or predict. Simply go with the flow. That’s the way it’s going to be for the time being.

BTW–ValueTrend will be posting our performance on Friday of this week. Although the numbers aren’t official yet, it looks like we’ve had substantially less market downside than markets had in 2018. This again illustrates that one can indeed limit your risk, and keep your money through the use of Technical Analysis. A major benefit to loss minimization is that you have less of a hole to dig out of when trading to recover. Remember, a 10% drop requires a 12% gain to break even. A 3% drop only requires a 3.1% gain to break even. The math is exponential. Those who bought and held last year with little activity will likely be looking at near 10% losses to recover from.